Folks often remark that they would “love to watch an average mountain biker throw themselves down some EWS tracks.” This past weekend I had the chance to play the ragdoll role in that fantasy during an industry race at the Bluegrass Trophy of Nations (TON) in Finale Ligure, Italy.

Industry comrade, Ulysse Daessle, from northern Italy’s Bluegrass Eagle/MET protection emailed me at the end of July, asking if I wanted to ride on the Bluegrass Factory Team for the bike industry portion of the event. I immediately replied with an exuberant “yes,” which was appropriately followed by sweat welling from between the grip-calluses on my palms. I hadn’t trained for any legitimate racing this season, and hadn’t planned on entering any “real” races. There was not time to change that situation, and there was no way I wanted to back out of the opportunity.

To spice things up a bit, my teammates for the event would be a fellow journalist named Tom Garcia from France’s Enduro Tribe and pro enduro racer Liam Moynahan. A friend told me that Tom regularly places toward the sharp end of the French Enduro Series, and Liam races professionally when he’s not making videos for Scott Sports. I was gonna slow these cats down without a doubt, but I was determined to fight as hard as I could to minimize the gap between us.

We met up with Ulysse and our team mechanic, Julien Mandin, Saturday morning for a few runs on a local gravity track called Petite Champery. After the first few turns, I realized that my fork, which had been sitting in the basement all summer, no longer matched the aggressive tracks nor my current riding style. It was bottoming out after every drop squatting low through turns. Julien added loads of air pressure and even more compression, and I was good to go.

After a late pizza that evening we attempted to watch Liam’s GoPro footage from his practice runs, which for my exhausted brain was likely less useful than getting extra sleep. I had been in the Czech Republic riding the week prior, and had not seen the stages. I fell asleep a few times while staring at the laptop, and resigned myself to racing on sight the following morning. I had seen segments of some of the stages while riding in Finale a while back, and that would have to do.

The timing rules for this event were a little looser than a typical EWS race. We did not have to adhere to strict start times and transfer limits, which took some pressure off the day. The remaining logistics were simple. Three riders leave the start hut within a 90 second window of one another, and their individual times are totaled at the end of each stage. Teams with three super-fast riders were the clear favorites, though several of the industry teams had a ragdoll like me in their ranks.

Our team tactic was for Tom or Liam to ride lead on the stage, depending on which one felt faster on it in practice. They left a gap of 10-20 seconds between one another so that if one of them messed up a line it wouldn’t affect everyone else’s run. I would take off in the third position, immediately after our second rider. My idea was to try and stay with the second rider for as long as possible and follow their line through the rocks.

With an 8:12am race check-in the following morning, our 6am wake up call presented an unpleasant catapult to the breakfast table. Before long we were all loaded in a shuttle van to the top of stage one. Given the 1,370m of climbing over 59 kilometers for the day, no one was complaining about the van up-lift.

The first stage employed all of the beloved Rollercoaster trail, followed by a newly reopened chunk of track below, totaling 6.5k in length. Apart from a few new turns, I know the pedally Rollercoaster track quite well and was able to follow Tom about halfway down, where my legs decided to remind me of the hard efforts I had made the week prior.

The second section of the track was super twisty, with larger compressions and berms that were difficult to judge having not seen them before. I bobbled several times toward the end and reached the bottom a bit concerned for the rest of the day. My body felt tired and overworked.

The second stage on Kill Bill 2 and Cacciatore trails was guaranteed to be a little better on my end, as I ride those tracks nearly every time I visit Finale. Tom led out the charge from the top, followed by Liam and I chasing 15 seconds behind. Roughly halfway down the track I passed Liam who had suffered a rear puncture, and still had a long series of rock gardens and drops to clean before the finish. He said he would fix it at the bottom, and rode easy on the flat to the bottom in hopes of not damaging the rim beyond the point that it wouldn’t set up tubeless again.

Liam pumped a tube on the road below, and we began the long climb to the top of stage three. We would have a chance to swap the tire in the pits during the time check after stage three, but the torn casing would have to hold throughout the next descent.

Stage three, titled “Ivoland,” was also a combination of trails called Pian Marino and Cromagnon. The lower section consists of what Canadians call “jank” trail, and Liam said they call it “nadgery” in Scotland. Both of those words are attached to tracks with oddly placed stones and wheel gulping holes that will throw riders’ hands into other awkward stones or trees. In general, there is very little flow, and laser-focus is the name of the game. Our trio completed Ivoland after my minor crash near the finish and rolled en masse to the time check and refuel station.

Back at the pits, we chugged water while Julian swapped Liam’s tubeless tape and reseated a fresh tire. Afterward, we swiped our time chips and headed off to find some grub before the pending climb. When we hopped back on our bikes Liam’s tire was flat once again, so Tom and I soft-pedaled the ascent while Liam put his tube back in. After the time check, riders are not allowed to re-enter the pits, so this was his only option.

The penultimate stage for the TON industry event would give us a healthy dose of “nadgery” from sprint to finish. The trail, called La Ruggetta (The Roar in English), was largely paved with odd shaped rocks and boulders that were far easier to ride over at full speed than to pick a line between. Toward the end, an ancient stone wall flanked the track, and I managed to oversteer and scrape my handlebar on it at least once.

Liam hadn’t loved the track during practice, but we all agreed that it was a blast at our respective race paces. The thick oak tree canopy above provided a welcomed respite from the hot autumn sun and some of the most consistent sightlines of the day.

With another clean run in the books, we moseyed toward the hour-plus climb to stage five.

Now for the most challenging bit, or at least it would be for me. The final descent, DH Uomini (Downhill Men in English), is by far the loosest, steepest, and most poorly named trail in Finale, and it has humiliated me a time or two in the past. I knew that the track would be lined with hundreds of ecstatic spectators and photographers and that I needed to zip up my personal discomfort with being watched and settle my debt with this slope. I had ridden it once, quite poorly, a few years back and crossed my fingers that I had become a better rider since. It would take at least three deep breaths, and likely a few more.

Liam took the lead, as the top chunk of the stage was a long and fast pedal between the pine trees. Tom and I followed after a 15 second gap, as Tom hoped to catch Liam on the steep half that he was more comfortable with so he could holler some encouragement. I faded into my head for a while on the pedally section, fighting hard to focus and push with what little was left in my legs.

I hit the first jump that I knew signified the beginning of DH Uomini proper, or what I have always affectionately called “The Cheese Grater,” and was pleased to find the trail in amazing shape. There were new turns where before it was a direct fall-line to skid down, and the track was taped tightly to limit the number of line choices.

I’m not sure if I was the slowest rider down stage five, and I don’t plan on checking, but I made it through all of the steep rock chutes and loose catch berms as fast as I could manage without sliding out, which felt like a win of sorts. I remember a lot of yelling, and chainsaw sounds, and a fun track that I can now enjoy on future trips to Finale. 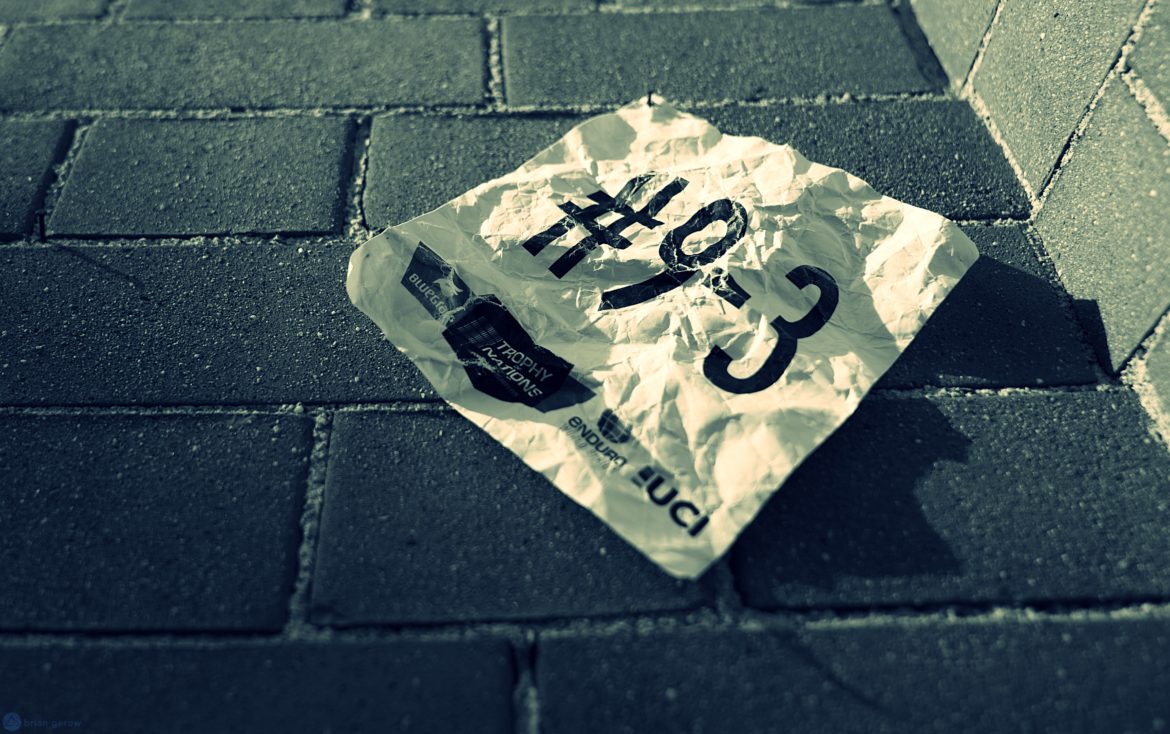 Bluegrass Trophy of Nations was heaps of fun, and if given another chance I will certainly throw myself down those tracks again — with far more strength training and less overall fatigue.

Thanks for the opportunity Bluegrass Eagle!

Good for you Brian! Given what you’ve endured over the last year or so kudos for even having the courage to throw down in that race.