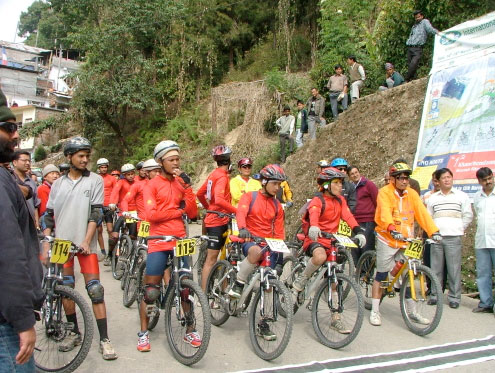 If you’re seeking a little adventure on the cheap in 2009 consider the Khanchendzonga Mountain Bike Challenge March 18-30 in the Indian Himalayas. The race course will cover 267 miles and nearly 46,000 feet of climbing over nine days of racing. The best part (other than getting to spend nearly 2 weeks in India): the race costs just $500 which includes 3 nights in hotel, 9 nights in tents during the race, and breakfast & dinner. It’s all part of an effort by the Sikkim Tourism Development Corporation to increase travel and tourism in the region. Airfare to India is probably the biggest expense for most riders but once you’re there you’re all set except for the bike!

The race stages themselves are relatively short (between 23 and 44 miles per day) which gives riders the chance to experience the cultural richness at each stop. Tread ranges from singletrack to jeep tracks to village roads so there’s definitely plenty of opportunity to get some Indian dirt on your knobbies!

I had the opportunity to go to India a few years back and although I didn’t make it to the Himalaya it was definitely a trip of a lifetime. I just hope the air quality is better in the Himalaya than it is in some of the larger cities – might want to bring a dust mask just in case!

[…] We wrote about the Khanchendzonga Mountain Bike Challenge back in January because it sounded like an interesting multi-day race through the Indian Himilayas. Apparently the race wrapped up a few days ago but the winners are miffed because they found out the promised prize money was cut in half, in some cases barely covering the race entry fees. […]