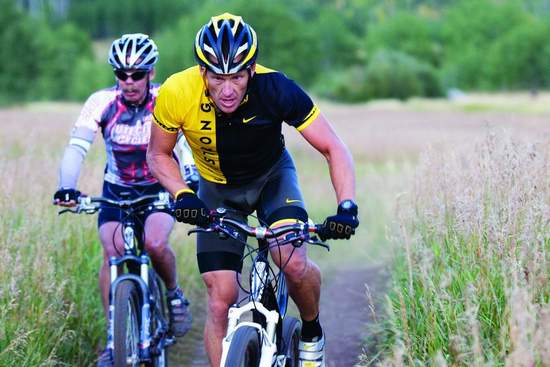 Lance Armstrong took first yesterday in the Smuggler-Hunter Creek mountain bike race in Aspen amongst “a field of Aspen real estate agents, waiters, bike shop mechanics, soccer moms and wide-eyed retirees.” Take that Dave Wiens! Apparently Lance is a new homeowner in the Aspen area and was just looking to take part in a local race.

The Glenwood Springs Post Independent reports Lance’s comeback decision came shortly after finishing the Leadville 100 mountain bike race when he realized how much he missed training and competing. Lance also intends to race in the 12 Hours of Snowmass mountain bike race as part of a 3-man team this weekend so if you’re in Colorado Sunday you might want to try to see the man.

The Post Independent article also reports Armstrong’s decision to return to the Tour isn’t so much about reclaiming glory as it is about raising money and awareness for cancer research. Of course another win or two would be a nice touch, though Armstrong is downplaying that possibility for now.Â  Stay tuned for the latest!