At Interbike last week I got a chance to chat with mountain bike pioneer Joe Breeze about the launch of Breezer’s first full suspension mountain bike, the Repack. We covered a lot of ground, and this is part one of our conversation. Part two will focus on some of the technical details behind the Repack, plus my test ride.

Joe Breeze: Jeff, I’ll tell you something about the repack–why repack. Of course you know about the downhill race and all that but. Charlie Kelly, the repack impresario held onto that name, [and] when other companies wanted to have a product named that, he [said] no. Charlie [and] I would go on rides … and we were jawing about bikes and he says, “You know Joe, if you ever want to use the Repack name I’d be honored to have it on the Breezer.” And I kept that in my [mind] because he knew we were working on that full suspension bike to someday get it out there and so yeah, as it went on it made more and more sense.

I don’t know if you’re aware of it but back in those Repack days somebody said you know, hey let’s try racing uphill too and Alan Bonds came up with the enduro. It was called the enduro. Summer of 1977 and you know that sixteen rider iconic shot of mountain biking? That was shot that morning of the enduro. And it ended going down Repack. So those two names have been joined at the hip ever since and it was like oh shoot, this is a natural name for the bike, right. And hey, it’s the bike … that’s [the] important [part]. The name, you can call it whatever, but it’s nice to have that. 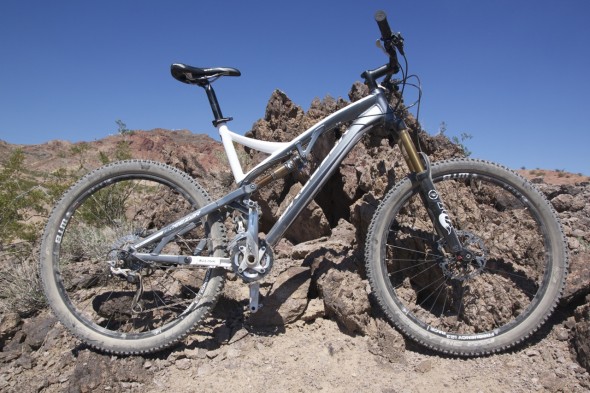 Jeff: Are there certain features or things you put into the bike that are throwbacks?

Joe Breeze:  Yeah right. The name, just the name. That’s an interesting question Jeff because back in the 90s when I was doing those spear-point hardtails you know it was sort of, it was a very retro paint job. [The paint job was], heck, from the 1930 Schwinns right? And that really clouded the message because that was one of the highest tech steel hardtails–and then when we were doing aluminum hardtails–the highest tech version of that and the lightest most efficient, people said best handling, anyway… But people got lost in the paint job like “oh, that’s really cool” you know so you gotta be careful here where you have this Repack name. [People might say] “oh yeah, that’s an old bike” but no, it’s all about the new and putting that smile on your face.

Jeff: What would you say connects (this bike) to (the heritage of the Repack name)?

Joe Breeze:  The fact that enduro racing represents probably the funnest thing in mountain biking today and that’s what we were having back there in the Repack days. It was the funnest time on wheels that you could have and so that too is another reason why those two names should be together.

Jeff: So do you see this as a race bike or is it more of a fun, everyday bike?

Joe Breeze:  Well, I mean we’ve had a good response from pro enduro racers wanting to have this be their ride. Looking at it going, “that makes sense.” But it’s for everyone. I mean we don’t have the 780(mm) bars for the 84mph glacier run but they’re 740(mm) bars and of course you can set it up however you want. But it is an enduro bike, it’s an all-mountain bike, and as it turns out with this mid-link suspension [thanks to] the Sotto Group’s design efforts, it’s a good uphill bike too. 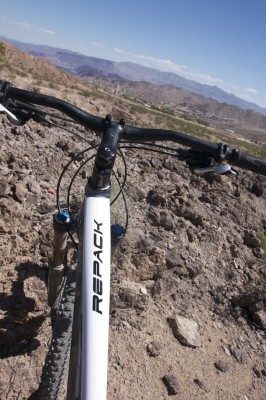 You can run that shock wide open and just take full advantage of the traction going uphill with the suspension and we don’t need that platform on there. People keep reminding [me] of this fact all day long, “this thing climbs (great) and handles well on the downhill.”

Now, what distinguishes this Repack from maybe other all mountain bikes is the geometry and I’ve always prided myself in geometry. I love to go fast not only uphill but downhill and so I just wanted this thing to ride like heck. I tell you, I love 29ers, love the big wheel bikes and I chose a twenty seven and a half because you know we do a 29–our hardtails are 29. I love the differential in axle height versus the bottom bracket height and that has a very important factor in that it allows you to ride a steeper head angle bike because [with] the differential between the [bottom bracket] height and the axle being higher, the fulcrum point is higher so you’re less likely to pitch over on the downhill and less likely to pitch back going uphill. That’s the big wheel advantage.

Jeff: So the steeper headtube [angle] makes it better for climbing but that’s compensated by the higher fulcrum point?

Joe Breeze: Yeah. And so I love the big wheel but with this all mountain bike the tires, they’re pretty stout on these bikes–they might weigh over a kilogram and if we went to 29 that’s just a lot of tire to be rolling around on the bike, you know? And also going on that same path, for say a downhill bike it would be a 26-inch. You’re also trying to keep the chainstay under control, a little shorter.

And so for the cross country and 100(mm) travel bike, 120(mm) maybe it will be 29 and then all mountain, twenty seven and a half, and downhill 26. But I love that big wheel aspect and I’m trying to take advantage of that with that head angle being steeper like that [68-degrees]. You might see 66 [degrees], maybe 64 [degrees] on an enduro bike–[but] for a 26-inch [bike] and frankly on some 27 and a halfs–they haven’t adjusted to take advantage of that. You’re bringing your contact patch in closer to your body weight so you can stay hooked up through the turns, so yeah, why not? Have fun on the bike, you know climbing it’s much nicer with a steeper head angle. Even going downhill I just love the feel of a little bit steeper bike.

JT Burke, Breezer brand manager: Big wheels add so much stability. The whole idea of slacking it out to get more stability out of a longer wheelbase is not even needed.

Joe Breeze:  I call it riding in a valley of confidence. You know, [the feeling that] those higher walls give you. I don’t see this aspect of it in the magazines that much. All day long [people talk about the] rolling diameter but I think the axle height is the more important thing.

Jeff: So back in the Repack days, did you guys imagine full suspension bikes?

Joe Breeze: Ah, yeah my dad actually came through the shop one day and he was a mechanical engineer for automotive stuff, race car stuff. He came through the shop when I was building up my first Breezers actually, not the first one but I remember it was Fred Wolf’s bike. He [came by] and says, “You know you can put a dashpot on the front fork, you know, just a simple suspension thing.” So I’ve been thinking about it this whole time.

JT Burke: I think motorcycles had them but there were no pedals. Pedals really screw it up.

Joe Breeze: No, they really do.

Joe Breeze: Especially when it’s vertical, with gravity. You know with a recumbent, it’s a different thing. Before the pneumatic tire, back in the 1880s, Dunlop didn’t come up with his tire until 1888 but there was a moment there where we came off the big wheel bike–you know, the Pennyfarthing–and got onto safety bikes. You know, equal wheel size with a chain transmission–and people realized without that big wheel the bikes were harsh riding. [Wheels were] 30 inches at first and the spokes were just so much shorter so it was like people were coming up with suspension designs back then, some pretty cool stuff.

Jeff: Have you been to [MOMBAT] in North Carolina?

Joe Breeze: No I haven’t been to MOMBAT, but I stay in touch with Jeff Archer and [I’ve] helped them out with their stuff. Did you know we’re starting a museum out in Fairfax [Marin County, CA]? [They will be] announcing it at the mountain bike hall of fame induction. The Mountain Bike Hall of fame will be moving from Crested Butte to Fairfax in the spring.

Jeff: That will make it much more accessible.

Joe Breeze: Absolutely. Don [Cook] and Kay [Peterson] who run that, they just want to see more people be able to appreciate the sport and the history. When we approached them about [moving the museum to] Fairfax they were like, sounds great. [Fairfax is] sorta the hub of cycling in Marin county these days and even back in the Repack days. Fairfax is where Repack is.

Stay tuned for more about the Breezer Repack, including my own impressions from a test ride at Bootleg Canyon.

Very interesting interview. I thought the comment about paint schemes confusing people about whether or not a bike was worth riding/buying/being interested in was interesting.