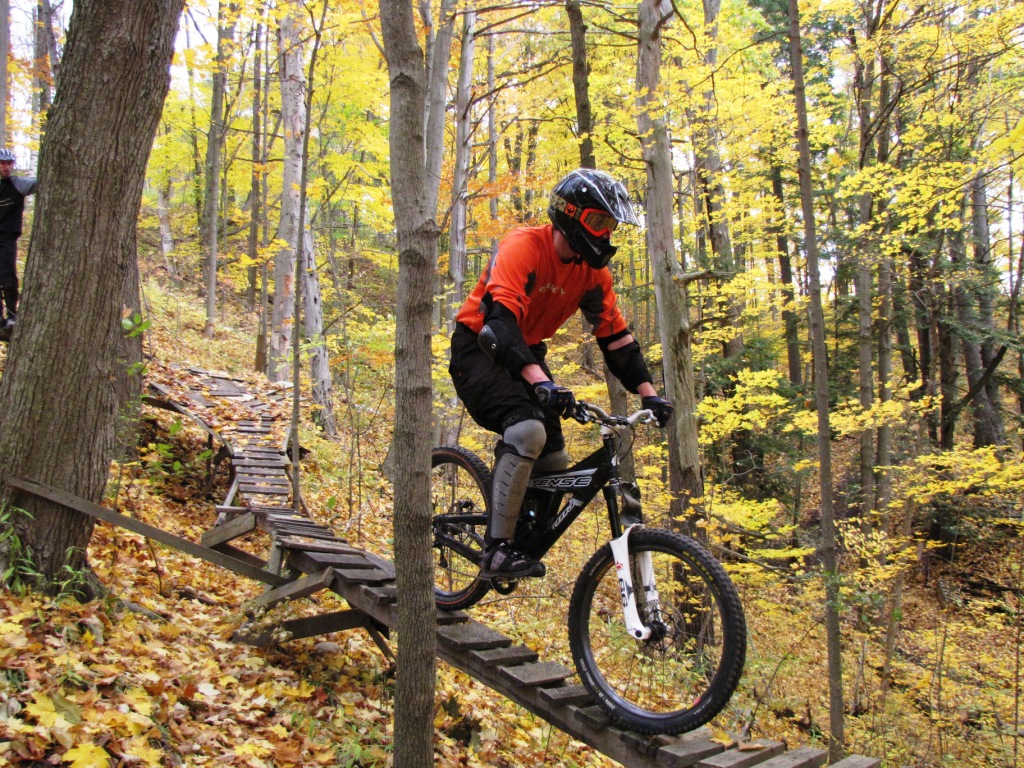 How many times have you thought, “wow, cool feature on this trail” or “what a great transtion on that last jump” when riding your favorite trail? Ever wonder how those trail features got there in the first place? If you’re riding in Ontario it’s probably partly because of Bob_the_Builder.

By now you have may have met Bob_the_Builder (also know as Kevin) in the forums. Kevin has spent numerous hours laboring on some of the trails in and around Toronto, fixing them up and making them “magazine quality” like the one above. Over the last couple of years our area trails have been really improving and becoming more technically advanced because Kevin knows the ins and outs of building sweet tread.

Catching up with Bob_the_Builder (BTB) on his latest trail creation close to an undisclosed ski area (still secret), I had the opportunity to chat with him about trails and trail building. I quickly found out that we both share the same ideas on what trails should and shouldn’t be and we spent the day going over his latest creations. I have to say I was really impressed with his dedication to the sport and his craft.

I am happy to say that he will be regularly posting on Singletracks, sharing his expertise on trail building as well as writing up a few reviews on DH specific products.

Welcome Bob the builder,I think we will all enjoy the subject matter you will bring to the table here at singletracks.Again,welcome dude.

Finally we will get some write ups and a few reviews on DH specific products. Woo Hoo!! I was beginning to believe this would never come. As a DH/FR and retired DH competitor, this is music to my ears and candy for my eyes. Now, as per the trail building, hopefully this will be an eye opening experience for all here on Singletracks. My thanks to BTB for his future work in this area on Singletracks. As a trail builder myself, but probably not as seasoned or experienced as BTB, I would like to to here and very much welcome his ideals and philosophy on trail building here on Singletracks.

Welcome aboard BTB and wishing all the best!

[…] was out shredding with a number of other riders whose opinions I really trust (including Bob_the_Builder), and we had a real go of it!  The first thing I noticed is the super-silent cassette body. I was […]