Since mountain biking was added as an Olympic sport in 1996, only two Americans have won medals. Both were bronze; Susan DeMattei in 1996, and now Georgia Gould in 2012. 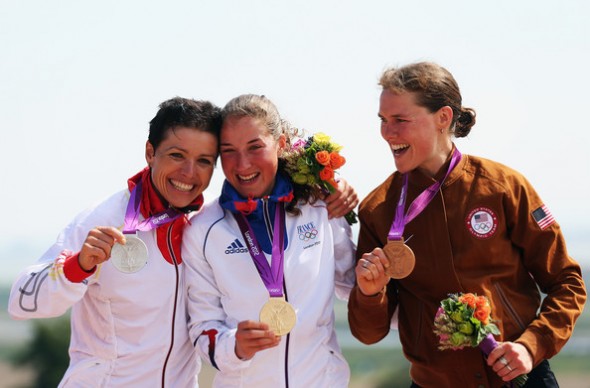 I got a chance to sit down with Georgia and her husband Dusty LaBarr (mechanic for the Subaru Trek mountain bike team) to chat about her Olympic experience and mountain biking in general.

Georgia, now 32, started mountain biking at 19 and has been racing since 2006. In that time she hasquickly made a name for herself both here in the US and on the World Cup circuit.

For the Olympic XC event, she rode her signature Orbea Alma 29er hardtail sporting a 1×10 setup with a 32t chain ring up front. She said there was one climb that was just a little too much for a taller gear. She also said that the course definitely had some technical sections, but that there are World Cup races that have more difficulty. Her favorite part of the course was the wooden gap jump. She said it didn’t look like much, but she felt like she was catching huge air off of it and it was just fun. 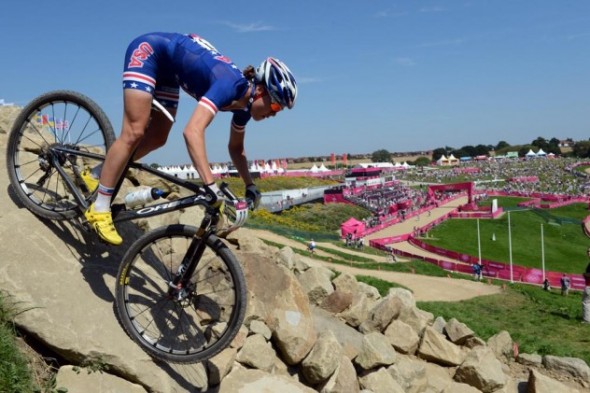 She also said that she liked the course layout overall as there was a little bit of everything; the course didn’t have any one feature that allowed individual riders to pull away too much and there was plenty of room to pass. Being such a spectator-friendlyvenue also helped as there were people cheering the racers on at almost every part of the course.

ST: You were already pretty well known in the mountain biking community. What has changed now that you’ve won anOlympicmedal?

GG: Well I definitely get more recognition from the general public now. I was wearing my Team USA jacket in a restaurant the other night and a woman said “cool jacket … hey wait, you’re that mountain biker!” But on the other hand, I have finished third in races before…

ST: And first even…

GG: Yeah! And against the same group of riders! 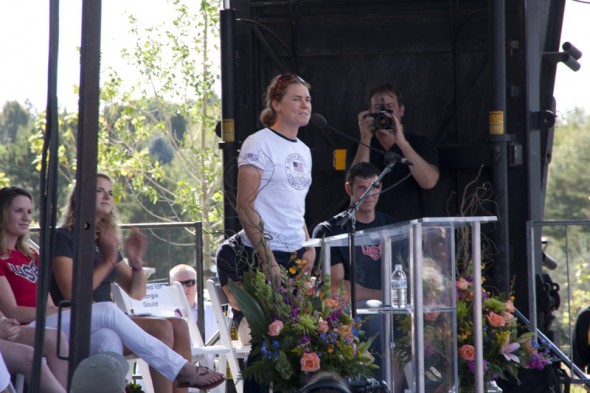 ST: The US has a lot of really talented and fast riders. In your opinion, why don’t we place better on the world stage and in the Olympics?

GG: TheEuropeansstart a lot younger, and even their junior races have serious technical features that we don’t see until we hit the higher levels. They also have a really well organized junior race program, butI think that mountain bike racing moving into high school sports here is really going to help.

DL: There are sports where the US does really well and in all of them the kids start out really young. The thing is, a $4,000 mountain bike is a lot bigger investment for a parent than a pair of track shoes or a basketball.

GG: Also, when riders start younger, it’s easier to learn basic bike handling and how to ride technical stuff. It’s like learning a language when you’re young vs when you’re older.

ST: You mentioned in your race report that there was one jump that you were having trouble with, Where was that?

GG: Right at the bottom of the wide rock garden. Pretty much everybody took that berm to the left. Sometimes it’s better to just take the easier line. Even if it costs you a second or two, it’s better than crashing.

ST: So, if Sabine Spitz hadn’t crashed in front of you, could the two of you have reeled in Julie Bresset?

GG: Everybody asks that, and there are things you can do when working with another rider, but really, who knows. I do know that Julie used it as an opportunity to attack and put some distance on us.

ST: When the crash happened, the BBC announcers said, “Look at the professionalism of Gould as she waits for Sabine to get back on her bike, rather than using theopportunityto pass her.” Is that really what was going on?

GG: (laughing) NO! If I could have figured out any way to get past her I would have been all over it. I even thought about jumping over her and running down that section, but there just wasn’t room. And it’s a good thing those cameras didn’t have mics to pick up what I was saying! 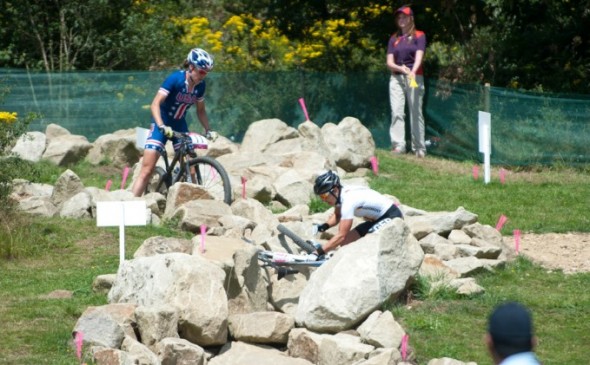 ST: A lot of kids, especially here in Colorado, have been inspired by watching you win a medal. What advice would you give them as they start competing and pursuing maybe even an Olympic dream?

GG: I would say just ride your bike a lot, have fun while doing it, and don’t worry too much about training just yet. I’m 32, and Sabine is 41, so there’s plenty of time to put it all together.

Georgia says she hasn’t yet decided about Rio in 2016, but I’ll be very surprised if we don’t see her chasing down Julie Bresset four years from now. 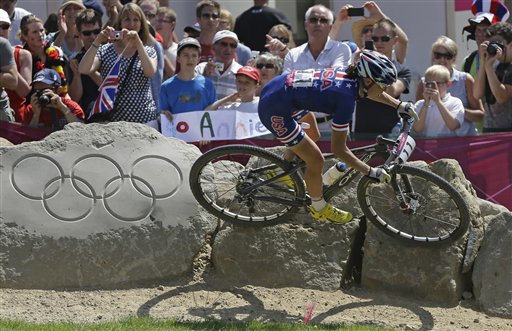 According to the likes of Phil Liggett, mountain biking “has no place in the summer Olympics,” and there is no question that the more traditional sports like swimming, volleyball or gymnastics get more attention and media coverage.

My younger daughter summed this up perfectly: “YAY! I got Missy Franklin’s autograph! … and … that other girl”

However, with athletes like Georgia Gould representing our sport so well, maybe that can change. 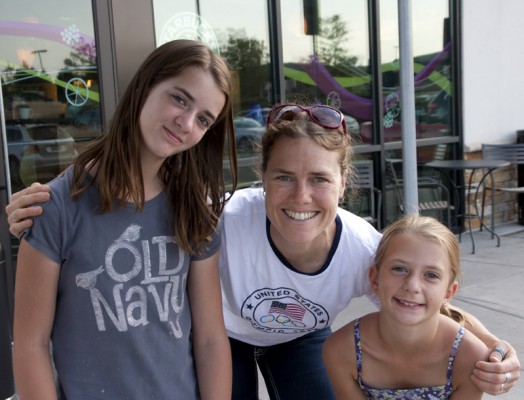 A big thanks to Georgia and Dusty for taking the time to hang out and chat. (And for tolerating my star-struck kids.)

Wow, Georgia Gould is amazing! Great interview as well, it’s cool to understand what Georgia was thinking at the moment of Sabine’s crash. Having an American win a medal in MTB will definitely inspire the younger generation!

Great job, MaddSlacker! Thanks for posting.

Way cool–great interview maddslacker! And again, congrats to Georgia on the bronze medal!

Its good to know if you started riding later in life you still have the opportunity to be very good!

2nd that rcraft. I don’t see myself racing anytime soon or seriously anytime, but it’s cool to know of Olympians almost as old as me.
Great get Madd, for you and for ST. 😀

Love Georgia, shot her races @rshinn the Whiskey Off-Road last spring and even off the track she is such a great sport and spokesperson for the sport itself. Congrats to her on the win.

MTB will continue to gain popularity as will the entire bicycle culture here in America, societies evolve but it does seem to take a very long time and its generally a bumpy road. I know kids today going to college on rodeo scholarships- I cant wait till the day there are students MTB’n their way through school.

Awesome riding Georgia! That smile says it all, congratulations and thanks for reppin’ USA!

@AK_Dan
I had a neighbor get a full-ride scholarship for rodeo. I was blown away. I hope the mountain biking ones are just around the corner!