About a month ago, this article created quite a bit of buzz on a Facebook group page. It focused on a Letter to the Editor of Total Women’s Cycling about the amount of pink bike clothing marketed to women.

In various discussions, we ended up talking about stereotypes and women bikers in general. “Why is everything pink?” “Shrink it and pink it!”

According to my friend Sparky, a lot of male riders put women into two categories: the “shredder” girl who hangs with the dudes, talks like a dude, etc and the “girly girl” who won’t try to ride anything hard, who whines and complains, and who is always scared.  But honestly, most of the women I’ve ridden with fall somewhere in the middle.

We’re not all the same, obviously, and so the ideas below really only speak for me.  I can’t pretend to know what all other women bikers think, but I can at least share some insights from myself and a few of my friends.

1. Most of us aren’t thinking about make-up and hairspray on the trail.

We’re grunting and wiping our noses with gloves, just like you.  We “farmer blow” when the need arises and will definitely use our shirts to wipe dirt, sweat, and blood off of our faces. 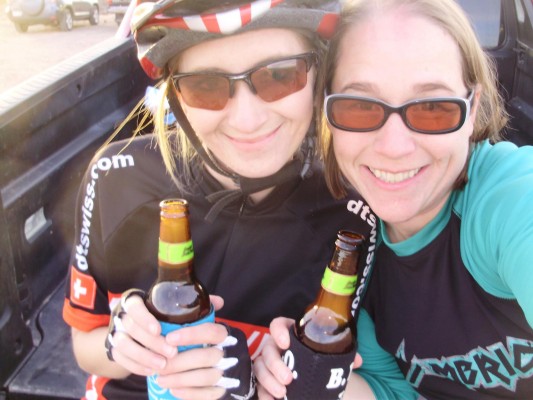 2. We (usually) just want to do it ourselves.

We’ll get our bikes down off the car, carry them up the Horsethief Bench portage, and put them back on the car at the end of the ride. It’s nice of you to offer, but please don’t be offended when we say through gritted teeth, “I can do it myself.”   (This is all completely negated if the woman in your life is clearly giving you the “if-you-don’t-get-down-here-and-help-me-I-might-die” look.)

3. You don’t need to compliment us when we drop the easiest ledge at Lunch Loop.

Seriously.  If you wouldn’t compliment a guy for doing it, don’t compliment us for doing it.  If you’re a significant other and it’s the first time we’ve ever ridden something, then yeah! That’s cause for celebration! But I’ve had random strangers say, “Nice job!” when I ride up over a rock that didn’t require any sort of skill at all.  Really?

4. Looks can be deceiving.

Just because a woman wears a bike skirt doesn’t mean she’s a sissy or a wimp.  My friend Adelle can out-bike some guys all day long on the trails… in a bike skirt.  With no pads. That being said, yes, we do like to wear colorful gear.  It doesn’t have to be pink, but don’t be surprised if you see socks with flowers, or bright teal jerseys.

5. We know crashing is part of the game.

And we’re ok with that. We don’t mind trying something new, even if it means we might crash.  Certainly we don’t look forward to crashing, and we really don’t like to crash, but we want to get better and ride more just like you do.  So we’ll do it: we’ll crash and we’ll get back up and try again.  Sometimes we even reenact our crashes:

6. We love to show off our bike scars and bruises.

Really.  In the summer, I wear skirts to work more often on the days when I know I’ve got a huge bruise on my leg.  We’re proud of our war wounds! No way am I hiding those babies under make-up or pants. When someone says, “What happened?” I want to be able to say, “I was bombing down Holy Cross, hit a rock and flipped right over the handlebars!” The cringes they give me are always worth it.

7. We can be quite competitive with each other.

Riding with Adelle has improved my riding, mostly because I want to ride whatever she rides.  We push each other to ride further, ride harder, and go bigger. It’s sometimes hard to compare myself to my boyfriend on a bike.  He’s been riding for years longer than me, has more upper-body strength, etc.  But I can compare myself to Adelle, and we can push each other to get stronger.

We want a good bike.  We’ll pay what we have to to get it.  Sure, I look for a bargain like everyone else, but some things aren’t worth the cheap version.  We want carbon, we want tubeless, and we want the best forks, brakes, and wheels too!  Just like you.

In the end, what we really want is just to ride.  We want to get out there, have fun, get dirty, and drink a beer. If you’re with us, bike the way you bike. You don’t have to slow down or take the “easy loop” because we’re there.  We’ll keep up.  Heck, before you know it, we might even pass you.

I loved this article because you described my wife to a T. My wife rides harder than some guys I know and I think it is awesome. You should see the look on guys faces when she rides by them on our rigid single speed…classic.

NOT my wife, unless we’re talking snowboarding, but yeah, that describes some of the women I ride with. 🙂 Great article.

Oh yeah! That’s my wife, too. All of it. The deceptive bike skort, flowered socks, even a pink shirt that has shown up in way too many photos. She’ll ride obstacles I won’t even try. Not afraid to crash and try it again. And the scrapes and bruises… she has, on mulitple occasions, had to defend me to people that think I may be physically abusing her. It’s a rare ride that I’m the one waiting for her to catch up.

I think it’s awesome to see so many women out on the trails these days!

Interesting that the article mentions all the trails in and around the Fruita / Grand Junction area as that’s the ONLY place I’ve ever seen multiple serious women mountain bikers at one time. Admittedly, that was at the festivals I’ve been to out there. I don’t deny that serious women bikers exist, I’ve had my doors blown off by a few on some climbs but they are very random encounters.

In the area where I live and ride (San Diego/OC), I’d say we run into a female that fits into the profile this article represents about once a month tops. The most hardcore female rider I personally know rides a MTB tandem with her husband. I’m sure there are more out there but I must miss them.

Come to Colorado Springs. I have had multiple women in a single group blow my doors off here. 😉

Love this! It is so true! I especially agree with number 3, about guys complimenting on the super easy stuff. It makes my inner feminist rage.

With regards to the article about ‘selling pink,’ I personally sport pink a lot. Mostly because I find some degree of satisfaction passing guys decked out in it (doesn’t happen often, but worth it when I do!) 🙂

Did you notice my pink shirt in one of those photos? Ha! I thought it was rather ironic…I didn’t notice that was the shirt I was wearing until after I’d sent in the article…

Thanks for representing! I am the chick with the bright pink Intense Spider bike (50 of them made worldwide) and matching pink shorts/shirts. And yeah, I carry my own bike, shred do-overs after falling on something and get tons of positive comments from guys about my pink bike (b/c I can ride with them!)
On that note…I’m riding Moab and Fruita early-mid May. I am always up for meeting new people to ride with…in the event you want the bright pink bike in your next blog! I tried to figure out how to contact you privately to no avail. Oh, and to the guy who said girls only ride Fruita…I’ve ridden all over CA, AZ, UT, NM, CO. We’re everywhere!

Love this article. Being only very new to MTB I am still tentative, non skilled and slow. But that won’t be forever. Like anything the more you do something the better the skill set and in the case of MTB the better your fitness level and fearlessness. I’m so looking forward to this, as my end goal is to bike anywhere in the world just because I can.

In regards to female clothing bring on variety. I still want to look like a girl that doesn’t just mean pink products. Make up means to me sunblock. But some days when I’m tired mascara keeps my eyes open. :-).

All in all who cares, it’s getting out there in the first place is where it’s at – living, taking life and terrain in, being open to new adventures.

I am 62 and have end stage liver disease and hepatitis c. I cycle for more life. I have had this disease since I was 21! Tell me I am not serious…i am stronger than the young with this disease, few are still alive that have had it as long as I have. I cycle alone because no one my age is cycling in the country on this island that is my age. I owe my strength to cycling.

That’s so awesome. You go girl! Cycle for life, i’m right along with you. Keep it up

I’m pretty sure you were describing me at the beginning, “girly girl” description.

This article totally describes what it feels like to be a female mountain biker!