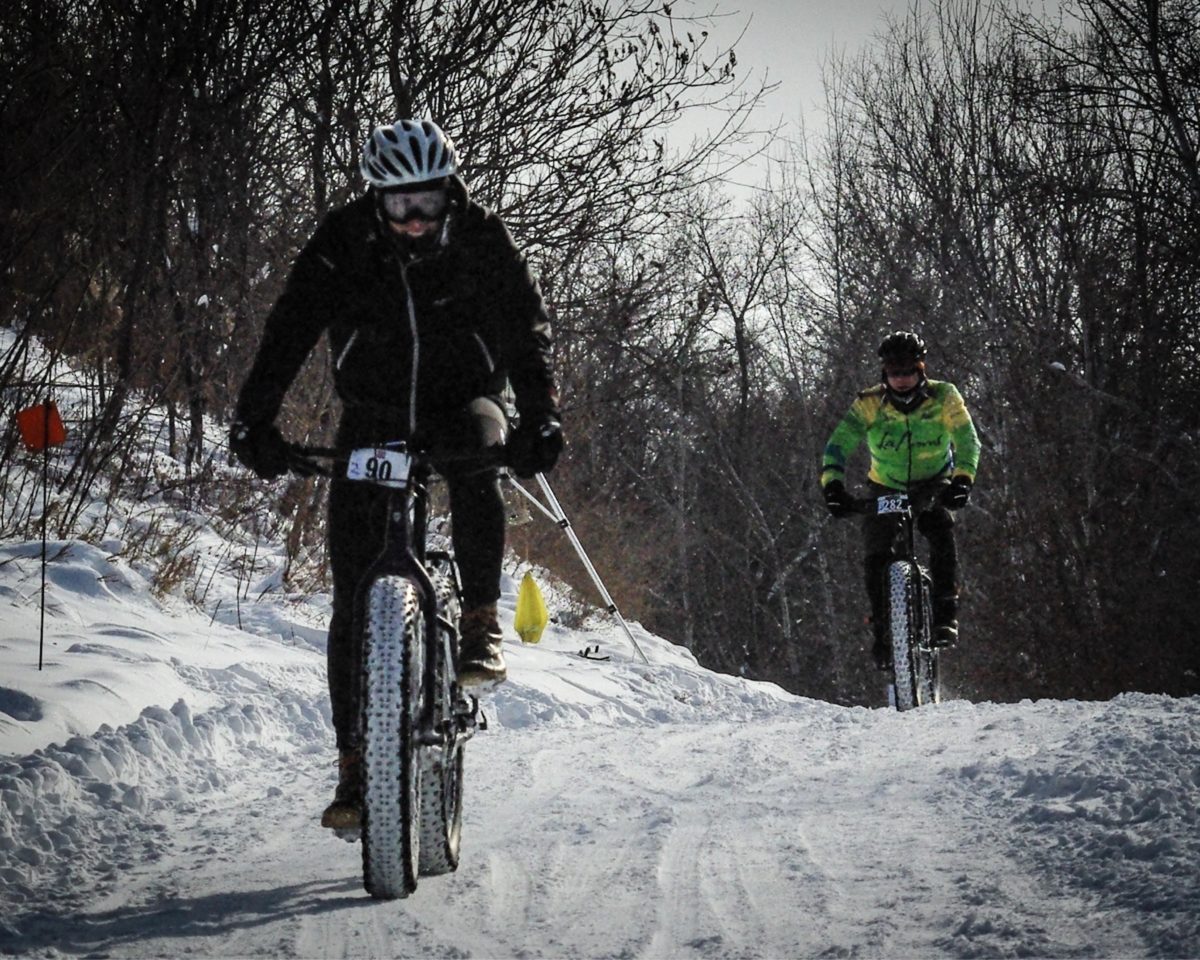 “What?” I replied, hearing the edge of panic in my race director’s voice.

“The owners have sold the property, where are we going to hold the event?”

For the last four years I’d assisted with marketing for the Solstice Chase fat bike race in St. Croix Falls, WI, and watched it grow from a fledgling event to the second largest fat bike race in the country. Fat biking remains a relatively new sport, but as more and more people purchase snow bikes, the demand for racing opportunities continues to grow. As a result, we’d seen our participant level double virtually every year.

“It’s going to to be hard to replace Big Rock Creek,” my director said, “there aren’t a lot of places with 1600 acres of rolling woodland with 15 miles of gorgeous trails.”

“How many people have pre-registered?” 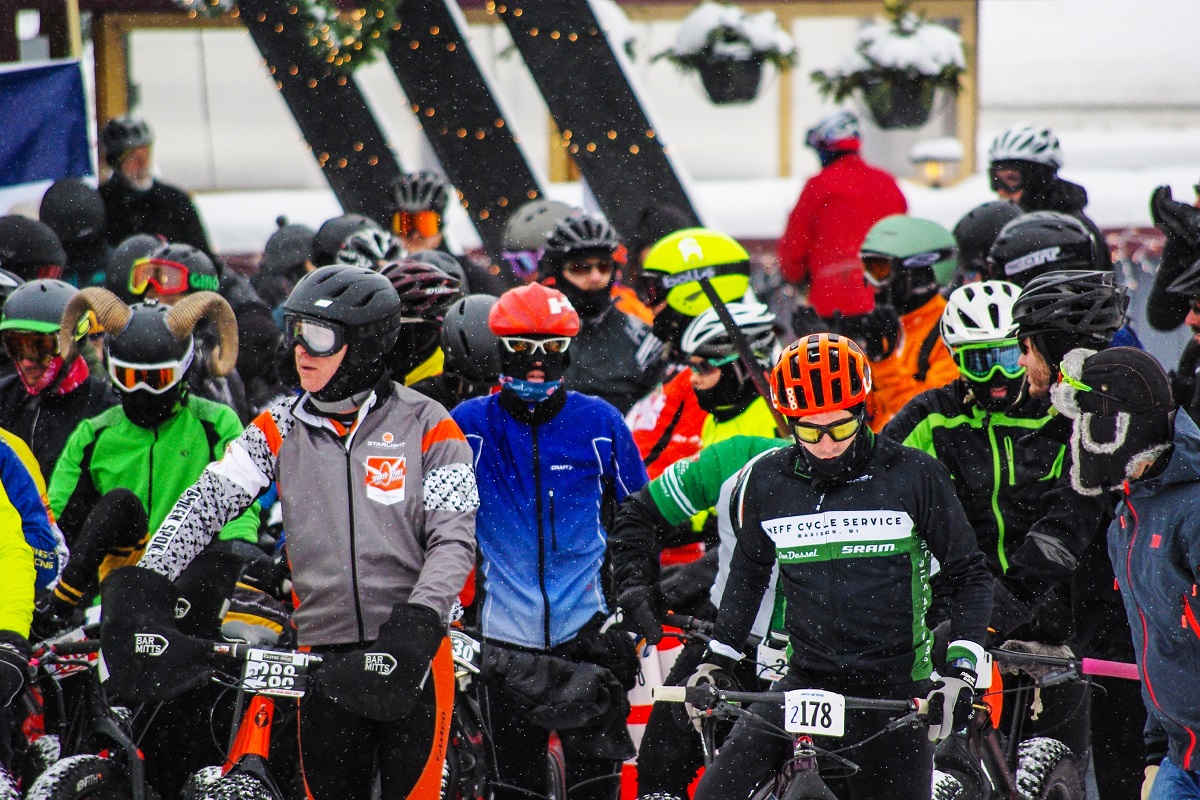 I hung up the phone. As the reality of the situation began to settle in, I couldn’t avoid feeling a twinge of panic myself.

There are certain safety concerns that are relevant to a bicycle race that you don’t necessarily have to consider for a running event. In bicycling, speeds are higher. Racers push each other on, so sharp corners and road crossings can become problematic. When putting on a race, the athletes put their trust in the directors to provide a challenging yet safe course.

For a moment, I considered canceling the event and issuing refunds. However, a race is something that gains in value over time. With every year, more and more people circle the calendar and make your event the focus of their season. Eventually, your race goes viral and becomes a sensation. Over the last few years I’d felt a palpable increase in excitement regarding the Solstice Chase. To cancel the race on the verge of a massive breakthrough was too depressing to consider. 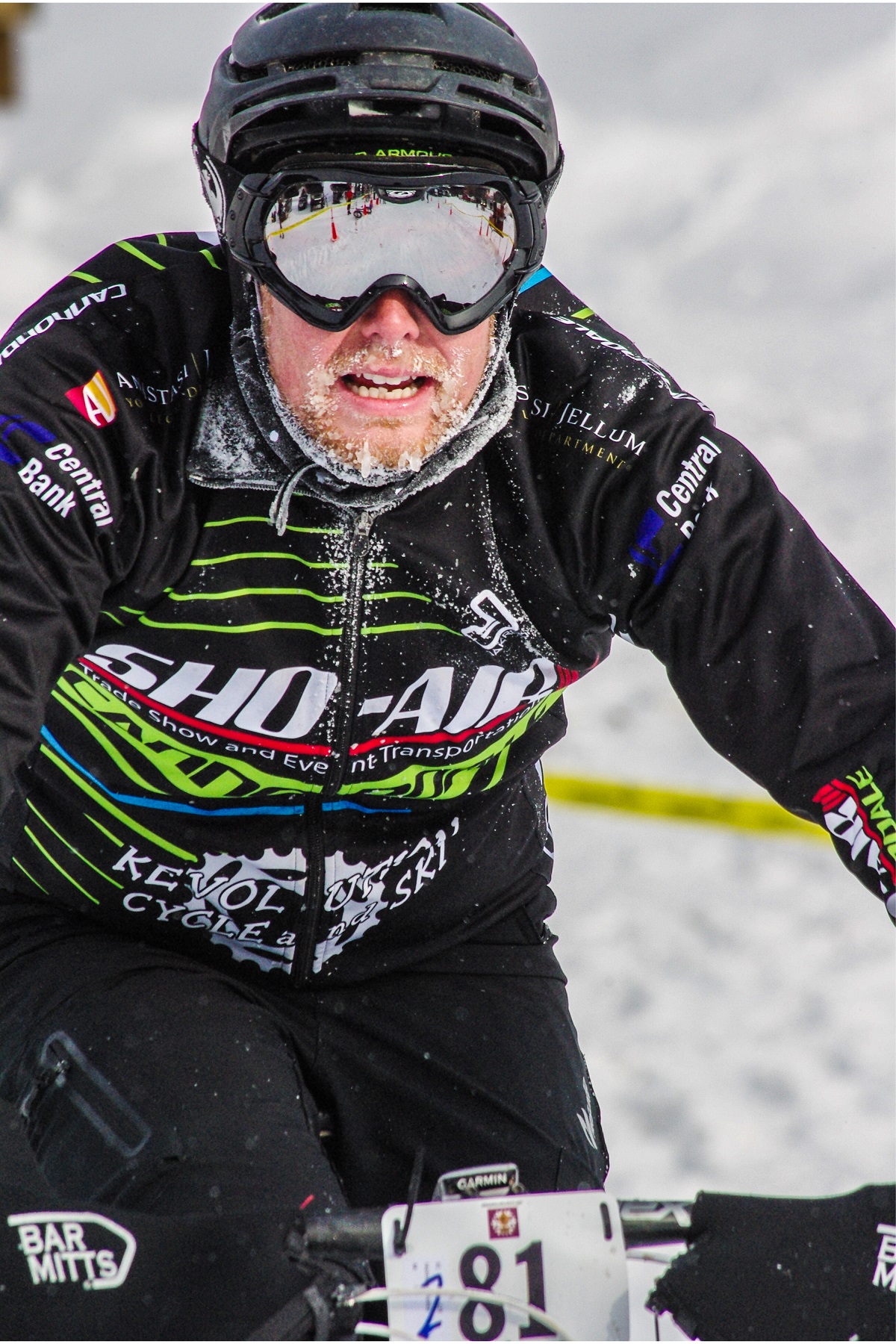 “The show must go on!” I resolved while firing up my computer.

Although the actual announcement of our venue change had been a surprise, we had heard mutterings that our previous location might not be available in the future. As a result, we’d done a minimal amount of work checking out other potential host sites.

One of the most promising areas was a downhill ski resort just 10 miles away from our previous race location. The Trollhaugen resort had several massive buildings and adequate parking for accommodating the thousand racers and spectators we were predicting. However, what it could offer in terms of a race course was still a mystery.

I navigated to Google maps and had a look at the Trollhaugen area. 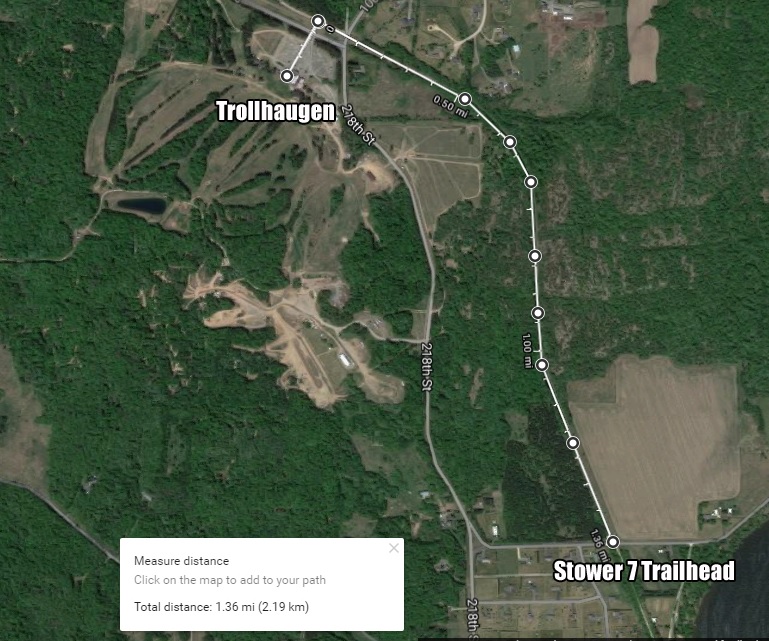 Designing a race course takes as much creativity as ingenuity. Fat biking is not quite like mountain biking because you can expect to be riding on frozen ground, so erosion and trail destruction aren’t major issues. Also, you don’t necessarily even need trails as much as clear areas free of scrub brush. If you can mow it before the ground freezes, you can ride it when the snow comes.

Our biggest concerns were: safety, distance, and course quality. I preferred to offer a two-lap course rather than three, but there was no certainty about finding 13 miles of good trail.

Pulling up Trollhaugen on Google maps revealed a network of potential trails behind the ski hill that bordered the buildings. Switching into the “Earth” feature allowed me to zoom in and get an aerial view of possibilities. You can even click on the map and take advantage of the “measure distance” function to see how long the trails are.

It didn’t take long to come up with a dozen or so possibilities, which I sent to my race director to check out. He seemed hopeful. 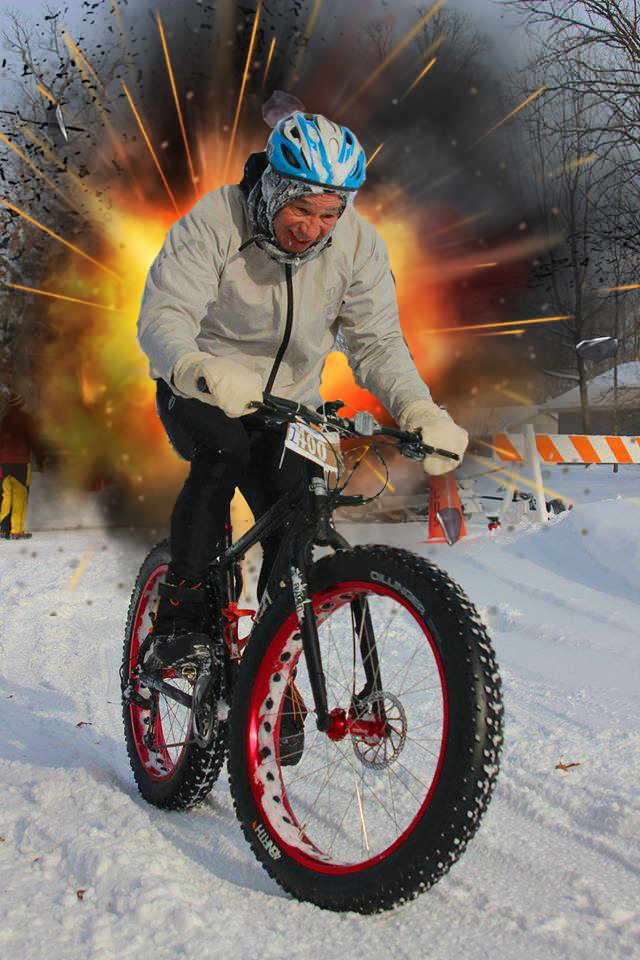 Having the information from Google maps was a tremendous help. It’s also possible to download maps into your GPS device using other features such as Garmin Connect. Sometimes you discover that what appears to be a trail based on the Google Earth photos taken in winter, might be a gnarly mess of overgrowth if you go to explore in summer.

A day later I received another panicked phone call.

“They’re all eroded from ATV use and impassable.”

“However, I did find a newly cut motorcycle trail that might work. But it’s only about three miles long.”

Three miles wasn’t going to be enough, so I returned to Google maps to see if I could find something promising for adding distance. This is where things got interesting, because about a mile from Trollhaugen there is the Stower Seven Lakes Trail, a limestone trail maintained by the state that is groomed for fat biking.

Our issue became figuring out a way to cut a trail from Trollhaugen to the Stower Seven trail.

Returning to Google maps, I sent my race director a map with three or four potential routes. 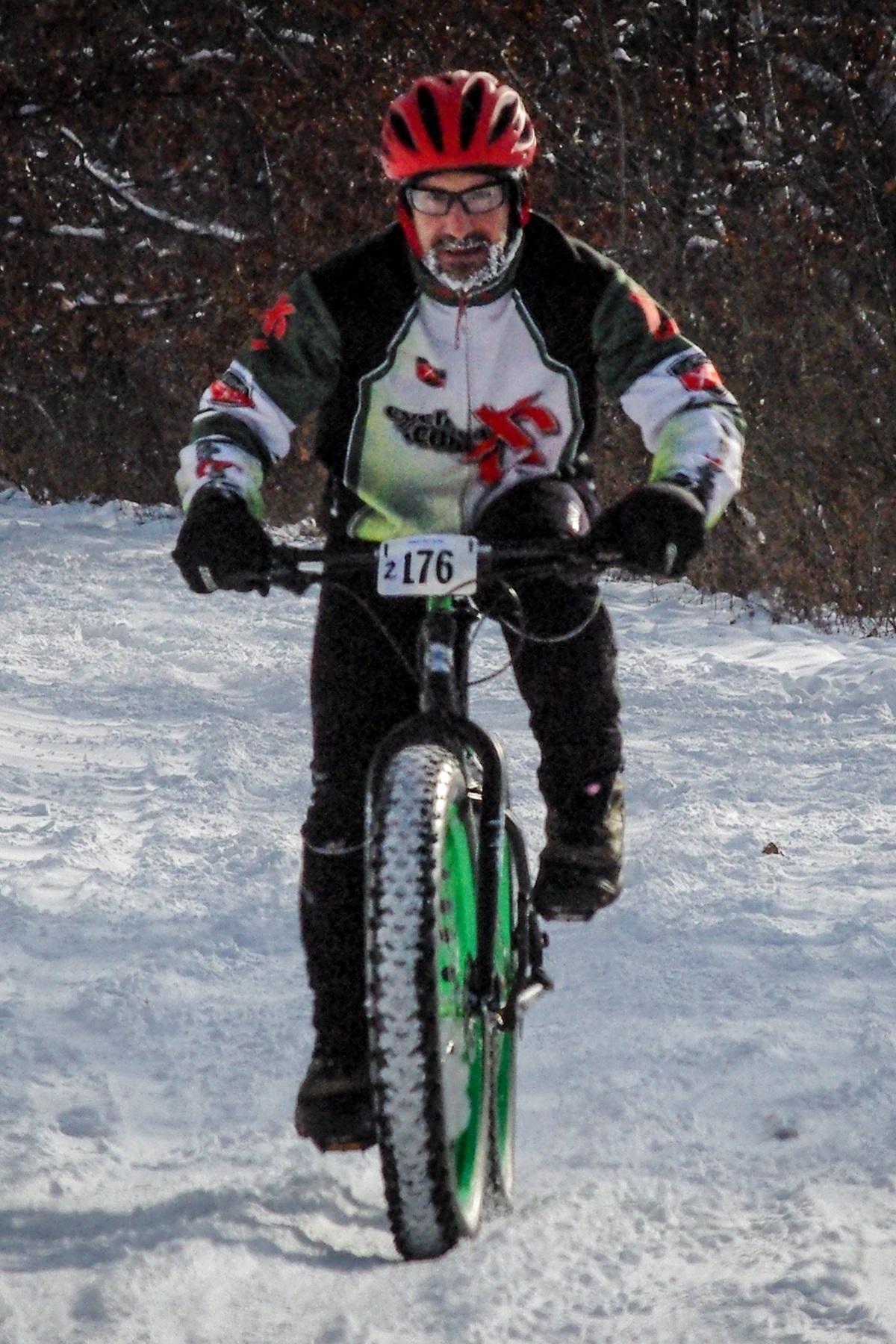 In only about a week, we put together a potential race course by using Google Maps data to help guide our reconnaissance efforts. The access to the aerial views made us aware of potential trails we never would have known about if our search was limited to hiking through the woods.

We were pretty excited about the Trollhaugen course but, in the end, the local mountain bike club offered us their trail network for the Solstice Chase. The Woolly trails are more established, so we decided to postpone the Trollhaugen trail system for a year to enable us to ride it on frozen ground before committing to a race. However, we’re excited about our discoveries and the possibility for bringing a whole new fat biking course into existence in the near future.

Adversity sometimes gets the ball rolling and sends you on to newer and better things. Assembling a 13-mile race course is like doing a jigsaw puzzle, but tools like Google maps certainly make an impossible task seem significantly less daunting.

Progression
How to Ride Flat Corners on Your Mountain Bike
Progression
Sizing Up or Down Based on Riding Style Can Work,...
Trails
Cuyuna and Pisgah Add New Trails, While Utah Gets a...
Gear
Would You Rather Ride with No Suspension, or No Dropper...
Subscribe
Login
Please login to comment
0 Comments
Inline Feedbacks
View all comments
Tags: Community | event, events, google earth, race, races
First published January 11, 2017 @ 4:05:09