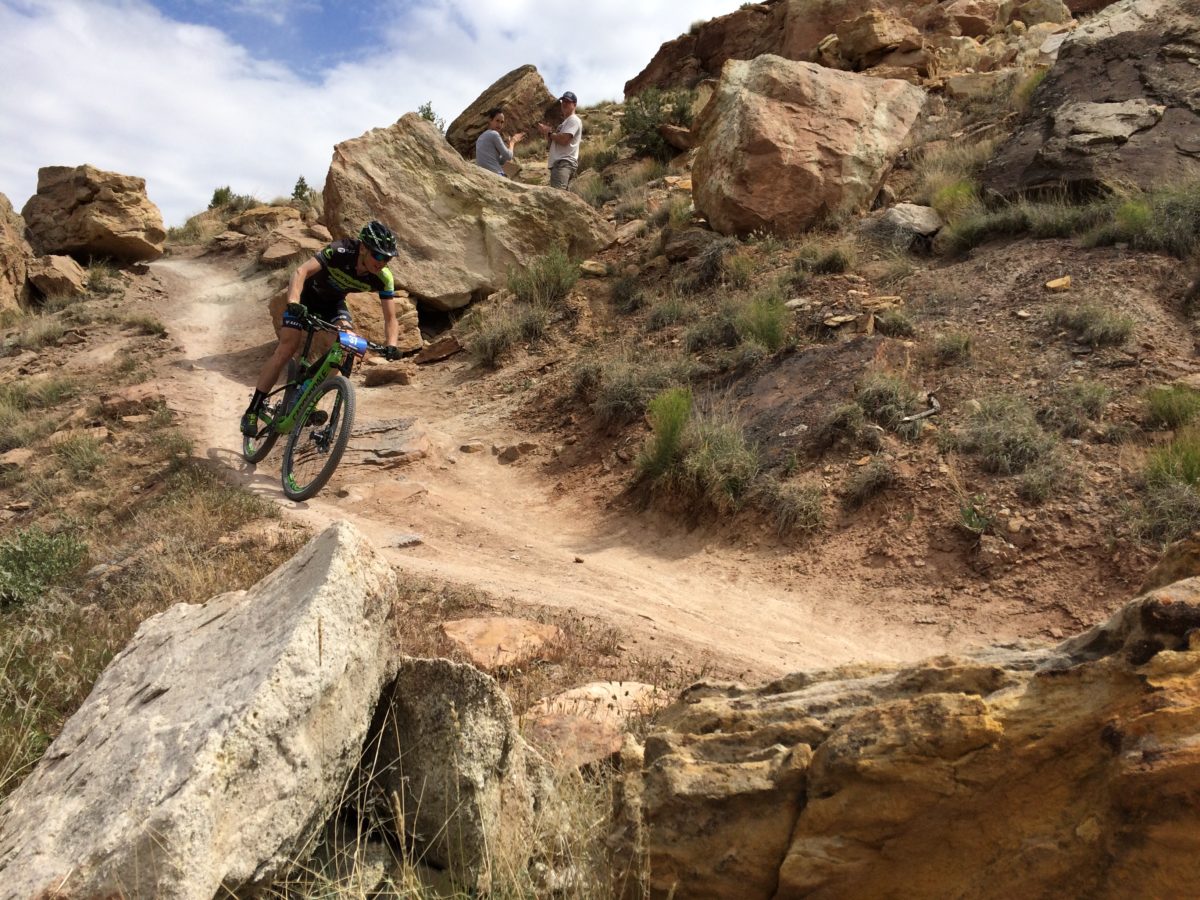 I heard the collective gasp of the crowd before I saw it. Rose Grant, the favorite to win, slid sideways across the pavement. Her bike struck the curb and then stopped, sparks flying into the evening air.

For a moment, the rowdy crowd subdued.  A medic ushered Grant to the side of the course; spectators stepped back to make room.  Any soberness, however, was short-lived.  The endorphin-fueled mass took up a collective ringing of cowbells as the women’s field of the Grand Junction Off-Road Fat Tire Crit passed by yet again.

The $100,000 payout at the Epic Rides Off-Road series is unparalleled, attracting pro riders like Geoff Kabush, Katarina Nash, and Todd Wells — but the racers have to earn their cash.  The Friday night Fat Tire Crit is the gladiator-like beginning to the Off-Road weekend.

“A good day on the bike” is the Epic Rides slogan, but it should be: “A good weekend on and off the bike.”  The Grand Junction Off-Road, like the other events in the Off-Road series, offers three full days of activity.  From the Klunker criterium, to the signature amateur endurance races, to the kids’ races on Sunday, there is no shortage of entertainment.

My first encounter with an Epic Rides race was 24 Hours in the Old Pueblo, ten years ago. I was straight out of college, lonely, and far from home.  Training for a solo 24-hour race seemed like a worthy diversion.  I don’t remember much of the actual race (other than the 3am misery), but I do remember falling in love with the Epic Rides culture.  It’s an environment in which it is just as important to have fun and to be nice as it is to be fast.  Todd Sadow, the owner of Epic Rides, has simultaneously wooed the big pros and catered to those of us who prefer beer to recovery drinks and playing in the woods to interval training.

In the decade since my first Epic Rides event, I’ve done all their races multiple times — with the exception of the newest race, the Carson City Off-Road.  This year, I returned to the Grand Junction Off-Road for the third time, embarrassingly out of shape and a bit hesitant.  Fortunately, my doubt quickly faded away as we joined in the festivities in downtown Grand Junction on Friday night.  My 4-year-old cheered as Geoff Kabush crossed the finish line first: “Look mama, he’s riding with no hands!”  A band played on the main stage, and we chatted with friends that we had made at previous Epic Rides races.  Between the friendly faces and the familiar itinerary, going to an Epic Rides race feels like going home.

That sense of ease had, unfortunately, dissipated by the time I arrived at the start line Saturday morning.  Having finished the race several times before, I knew the pain I was about to encounter.  Both the 30- and 40-mile courses are technical and grueling.  It’s a race that sends unprepared dirt roadies home crying.

Despite the sadistic nature of challenges like the near-vertical hike-a-bike on the Widowmaker, the course is the stuff of daydreams.  Anybody who eats, sleeps, and breathes mountain biking will appreciate the flowy Gunny Loop, the rowdy descent on Butterknife, and the painful but scenic climb to the top of the Uncompahgre Plateau.

For middle-to-back-of-the-pack racers like myself, the ride is nothing short of a social event.  By the time I made it to the second aid station, I was firmly entrenched in a group of riders that yo-yoed back and forth.  We chatted animatedly and shared gel shots — and for some, shots of Whiskey.

Four plus hours later, I arrived back downtown.  Coming thru the finish line was like riding a red carpet into a magnificent party.  Volunteers handed me a finisher’s wine glass, a wet towel, and a can of Four Peaks Kiltlifter.  I took photos of groups of friends, ate ice cream, and listened to live music—before heading back to camp for a much-needed nap turned early bedtime.

Even then, the weekend wasn’t over.  We drug our tired bodies out of our sleeping bags on Sunday morning, brewed some coffee, and frantically shuttled our son to the start line of the kids’ race.  Children of all ages, from toddlers to pre-teens, lined up with their parents in the same starting chute that the pros had been in half an hour before.  The next generation of mountain bikers were treated to a fully-stocked aid station, finisher’s medals, and a good dose of bike stoke.

Before leaving town, we headed out to the Lunch Loops trailhead to get in a little pumptrack action and to watch the pros ride through on the last leg of their race.  As had been the case at all of the weekends festivities, the other spectators were friendly and we made fast friends while waiting for the leader to come through.  Our collective group of bike lovers rang our cowbells and cheered when Carl Decker treated us with a wheelie on his way by.

Reluctantly, we packed up the car and climbed in as the last racers sped toward town. Driving home, the work week loomed like a dark rain cloud on the horizon.  It is hard to leave an Epic Rides event and it is even harder to leave your tribe.  The good news is that it’s never more than a few months and a healthy dose of training until you can assemble again at the next race.

The Grand Junction Off-Road is held the weekend before Memorial Day in Grand Junction, CO.  To learn more about the event, and the other Epic Rides races, visit their website: http://www.epicrides.com/