I first skied down a snowy slope at the age of 8 or 9 and from that point on, I’ve been addicted to flying down mountains at top-speed. I grew up reading all the skiing rags about the epic terrain, endless chairlifts, and deep powder found in the Alps. Ever since I was a pre-teen, one of my life goals has been to take a pilgrimage to the Alps and experience that formidable terrain for myself!

This summer saw my childhood dream finally come true! But with one notable tweak: while I originally envisioned traveling to the Alps with my skis, it was my mountain bike that finally took me there. I’m ok with that, though, as my time riding mountain bikes in the Alps was a truly incredible, once-in-a-lifetime experience!

France is a big place, and while I would have loved to explore every single resort and every single chairlift, I had to narrow my focus a bit. Specifically, I based my time in France out of the resort town of Morzine, and rode in the Portes du Soleil network of bike parks. 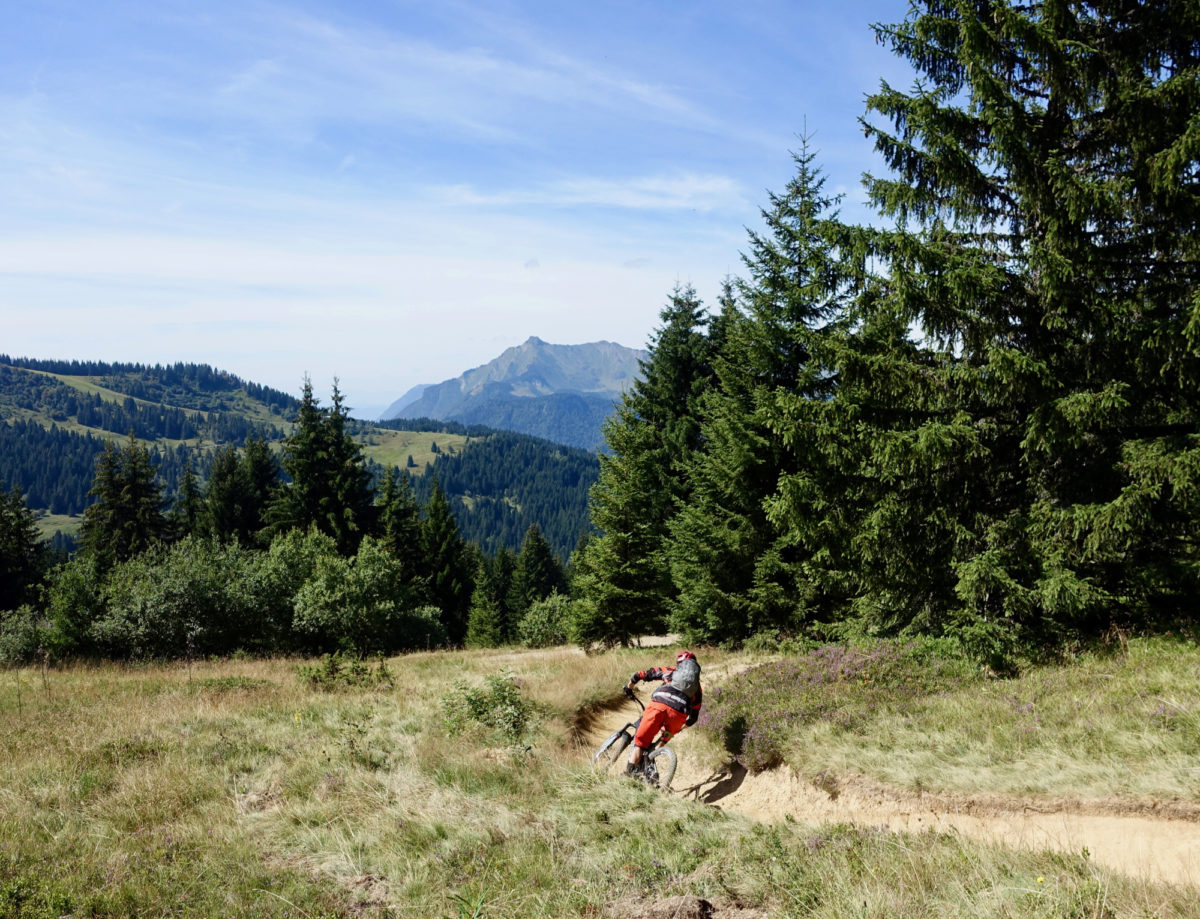 Let that sink in for a second: 25 lifts. For mountain biking. On one lift ticket.

For comparison, Whistler has two chairlifts that run for mountain biking.

And the lift ticket itself isn’t even that expensive. A day ticket costs just €23 (about $25 USD), and a season pass can be purchased for about €200.

While Portes du Soleil refers to the entire area, you’re more likely to have heard about each bike park individually, such as Chatel, Champery de Crosetes, Les Gets, Morgins, Super Morzine, and of course Morzine itself. Yes, all of these bike parks, each with its own flavor and area of expertise, comprising dozens of signed downhill runs and even more unsigned trails, are all ripe for the picking with a €23 pass!

The Pleney lift is a gondola that rises straight out of Morzine, forming the closest-to-town ski area and bike park. I met up with my guide, Jo Pauly of RideAbility, at the bottom of the lift, and I began to get the entire run down on the area.

The trails under the Pleney lift are famous for being some of the original downhill tracks in the region, with the main trail known as the “Main Line.” Morzine, along with nearby Les Gets, has hosted many downhill races over the years, from World Cups to World Champs. Consequently, the Main Line is a true-blood downhill race track, complete with brutal rock gardens, jumps, drops, endless braking bumps, and a general sense of gnar that can and will destroy you. We eventually rode just one portion of the main line, and on my puny Santa Cruz Bronson trail bike, it was plenty!

After ripping through high-speed berms, manualling through a few mud holes, skimming over webs of roots, and generally hanging on for dear life, I had a hootin’, hollerin’ good time! But as we reached the bottom of the mountain, I thought back on the run: “that’s seriously the easiest trail out here?! I’m glad I didn’t bring a beginner friend along for the ride.”

While Jo does some guiding, his main gig during the summer is mountain bike skills training, as his company’s name would indicate. While he doesn’t force skills training on anyone who doesn’t want it, there’s been more than one occasion where a guiding gig turned into a coaching gig because the client simply didn’t have the skills necessary to ride these trails.

After another run or two to warm up, we grabbed a trail across the mountain, over to Les Gets. Click below to read more…