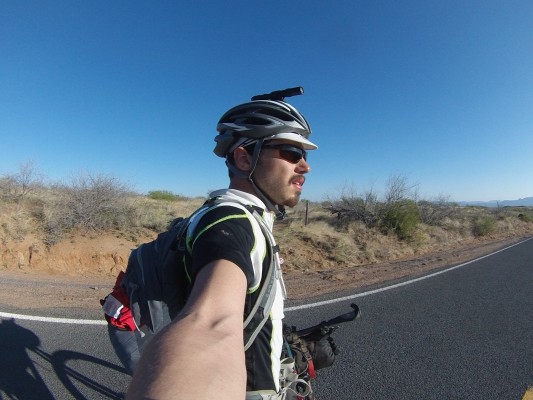 Getting into Oracle, I was pumped for the last section.

I was tucked into my bivy as the sun slowly rose; for some reason my alarm didn’t go off. Luckily I woke up just as Dave passed by. I hustled to pack up my sleeping gear and got moving, parting ways with Luke and Casey on the descent into the Town of Oracle.

I met Dave at the Circle K on the west end of town around 8:40am since the market on the east end was closed. We chatted as he was packing up the food he had just purchased and I told him I was feeling good and hoping to push for the finish. Dave simply said the next bit was “tough” and he took off as I began shopping: coconut water, Snickers, trail mix, a breakfast sandwich, an apple, and a Bomb Burrito (it’s a foot long.)

I chugged the juice and destroyed the apple. I took inventory of the rest of the food in my bags: beef jerky, Powerbar gummies, Cliff Blocks, two Cliff Gu’s, and my emergency bag of Uncle Ben’s pre-cooked rice. I figure this and the recent purchases would be enough to get me to the finish.

I was about to head out when Luke and Casey arrived. I told them I thought I was going to push on and try to finish in under 3 days. They were also feeling good and had thoughts of doing the same. I left Oracle and got back on the Arizona Trail having no idea what challenges lay ahead. 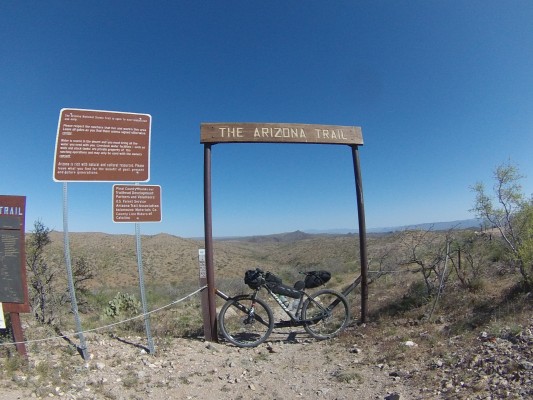 Back on to the Arizona Trail after Oracle. What a draining section.

It was now Sunday around 10:30am and the heat was already starting to get to me. I was now truly in the desert with lizards and rabbits scurrying across the trail, the saguaros waving to me, and the cacti menacing, especially the jumping cholla.

Jumping cholla is a very interesting cacti in that once the tree is brushed or the wind picks up enough the stems break off, thus creating a free section of the plant. The cholla were all over the trail and with the slightest contact they stuck to anything. People said to bring a comb to remove the needles since they attack in burrs. I had one encounter with a cholla that stuck to my hand; fortunately I managed to pry it off with another bush. It felt like getting a shot–except the “shot” stayed in me and wasn’t easy to remove.

That was my day, staring at jumping chollas, saguaros, lizards, and rabbits in the desert heat. It was only getting hotter when I saw Dave stopped on the side of the trail. He was tending to his slashed tire, a mechanical from the first day. We talked a bit about the heat and how far we had to go. While we were talking a few women who know Dave approached from the opposite direction on their own bikepacking trip. It felt good to see new people on the trail.

We continued on, riding together and finally got to the Beehive Well. We sat in the shade next to the well pump behind a shed. Dave talked about finishing the 300 last year and about his Colorado Trail Race experience on a singlespeed. He got back on the trail, and I followed. 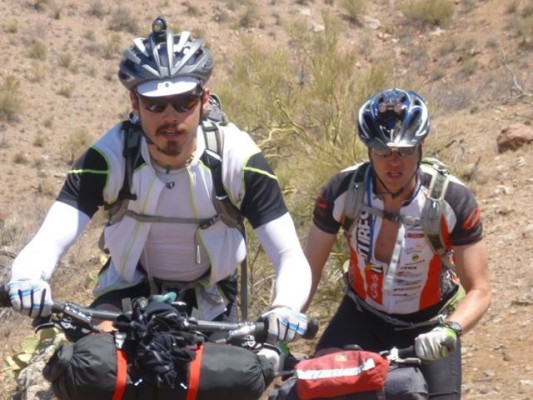 Dave and me climbing in the desert heat. Photo Compliments of Caroline Soong.

I biked past Antelope Peak and knew Freeman Road was not too far off. I was doing okay on water since I carried more than I needed for most of the race. As a rookie I decided it was better to have too much than to be without water.

I made it to the Freeman Cache and noticed a racer laying under a tree in the shade. I don’t remember his name; I just remember how comfy he looked laying down. I topped off my water from the cache and got going after 5 minutes or so.

After the cache, the route was super easy with a very fast mix of road and singletrack. I figured this was the perfect opportunity to make up for lost time from the day before. This was just what I needed, and although the sun was still out the temperatures were cooling down. I passed Big Dave as he worked on his tire once again.

Shortly after passing Dave, I stopped to eat my rice before the Ripsey Mountain Climb. Dave caught up and we pushed on to the climb together in hopes of making it to Kelvin before dark. Unfortunately this would not happen. All of a sudden Dave stopped me, saying “look!” I was confused until I saw the snake. I asked him if it was poisonous and he said “oh yeah.” This was the first rattler I had ever seen. 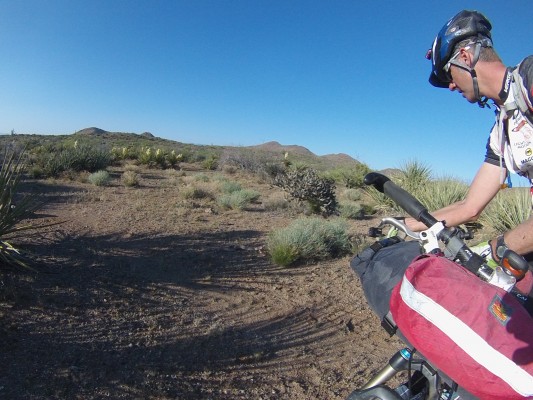 It’s hard to see, but the snake is in the middle of the picture, just left of the bush in the shadow.

The sun set as we reached the saddle. I tried to get my lights on but had a problem with my helmet light. I knew the batteries were still good but the light just wouldn’t turn on. I decided to rig my small headlamp to my helmet, hoping it would get me through. It worked but was not nearly as bright as I would have liked.

Dave and I made it down to Kelvin. We reached the parking lot off the highway and filled up on water. Here I chowed down my Bomb Burrito, and also changed my socks. I assessed my food situation again: one Cliff Gu, a half bag of trail mix, Power Bar gummies, a little bit of jerky, and two emergency packets. I was getting low on rations and was a little worried about it. I called up Lindsay to tell her that I planned on finishing that night or early the next morning. 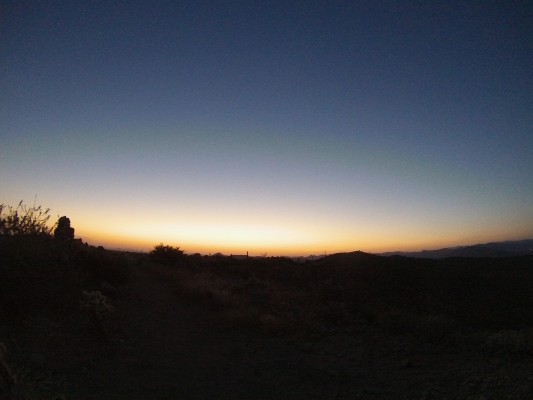 We began the long haul to Martinez Canyon and the first part of the trail was actually fun. The trail follows the Gila River and each climb is rewarded with a fun downhill. We paced ourselves, making sure not to to overdo it. We continued up and down the trail, in and out of the cool river air. Dave and I were exhausted but my goal to finish under 3 days was still in sight. We decided to find a good flat spot near the Gila River and took out our bivys for a quick 30 minute nap. It was just what I needed.

… I wake up from the nap next to my fully-loaded bike. I hear Big Dave rustling and I get out of my bivy. I needed the nap to at least attempt the last push up and over the very difficult climb into Martinez Canyon and eventually Picket Post Trailhead. It’s about 1:00am when we awake from our nap.

We continue grinding as the clock passes 4, then 5am. Finally I see cars and a few minutes later I reach the trailhead, where I see Dave sitting on a lawn chair watching me finish while eating bread and butter. My first bikepacking race is in the books!

I’m pretty sure this was the hardest thing I have ever done. The last few hours were by far the most mentally draining and physically demanding part of the race. I signed up for the Arizona Trail Race because I wanted a challenge. I wanted to try one of these self-supported, multi-day races, mainly to see if I could handle it, or even race a little.

But man, this race felt more like a fast-paced adventure. A lot of hike-a-bike, almost too much for my liking, although I knew that coming into the race. Another factor was the heat which was relentless, especially the last day from Oracle to Ripsey. Lindsay showed up soon after my anti-climactic finish. We made our way to Scottsdale and found a hotel. I slept 16 hours and ate an amazing amount of food. After it was all said and done, I traveled 306.6 miles with 31,794ft of elevation gain in 2 days, 21 hours, and 49 minutes.

See you all next year! 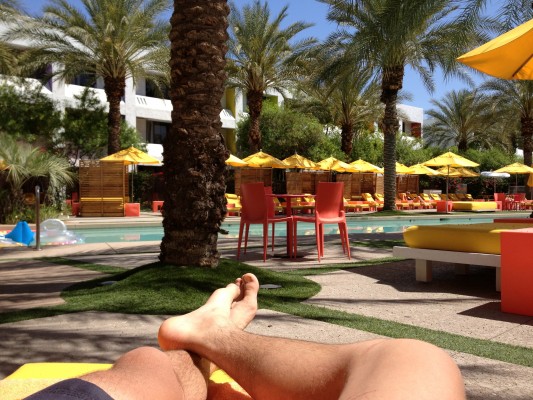 After 16 hours of sleep, I enjoyed some R&R next to the pool at our hotel.

Check out this page for more information about the Arizona Trail Race and final results.

Gear
The Maxxis Minion DHF Tire is Still the One to...
Gear
These MTB Deals are Fire, including 40% off Patagonia Dirt...
Progression
Sizing Up or Down Plus Handlebar Widths and Crankarm Lengths:...
Gear
Never Underestimate the Power of a Good Zip-tie
Subscribe
Login
Please login to comment
9 Comments
Most Voted
Newest Oldest
Inline Feedbacks
View all comments

Wow, what an adventure man. I was reading your blog and it seems like you brought a LOT of stuff with you…did you use most of it? What would you say was the most difficult part of being out there for so long?

I brought a lot because I did not know what to expect. I read plenty of blogs but conditions are completely different year to year. The weather forecast was on the good side so I did not bring a lot of extra warm clothes.

Things I could have done with out:
Long Johns – Never used them
Rain jacket – Used once up on Mt. Lemmon after eating. took it off 10 minutes later.
Long sleeve Thermal – I never used
Extra socks – I put on for the final stretch. I could have gotten away with not using them.
I did not bring my tent footprint – this was a last minuet decision and I’m glad I did not.
could have carried less water – Maybe not take any bottles, my load was heavy with all that water.
But that was about it. my saddle pack was not very full which was my goal.

I really needed to carry more food that was a scary last section without any food. oh and a spare needle would have been helpful.

FYI: My Fork was warranted because my internal negative air would not hold. No other damage to the thing! super happy about this!

Nice, glad to hear they took care of your fork!

Just broke again on the Kokopelli Trail on Saturday. Frustrating to say the least, got another race on Sunday.

Super impressive finish. Any more bikepacking races on your calendar for this year?

As of right now I’ve only got the CTR, but might attempt something else in the fall. Possibly a ITT of the grand loop?

Very impressive indeed. I was looking at the finishers list, 6 days-2 hours-22 minutes for Ron, Jeff & Donald, that’s a long time to be in the AZ heat. My wife would have gone crazy worrying about me.

Yes it’s a long time, but mind you those guys are sleeping long nights, doing little night riding and maybe even staying in a hotel. It’s more of a ride not a race for those guys!

Congrats on a great finish! I thoroughly enjoyed reading about your adventure and NOT having to pedal 300+ miles 🙂