If happiness is contagious, then it’s moving even quicker on two wheels in the Navajo Nation thanks to advocates in the Southwest. One ride can change a life and that life can change countless other lives. Tom Riggenbach, Claudia Jackson, and Nigel James — amongst other riders on the rez — are proving this.

Riggenbach moved to the Navajo Nation decades ago and started the Tour de Rez, a fundraising effort which has transformed into a race series. Claudia Jackson rode the Tour de Rez one year and was inspired to start the Tour de SiiHasin, a ride for suicide awareness, which in turn is leading young female mountain bike athletes and developing some of the first mountain bike optimized trails in the Indian Wells area. Nigel James, who rode the Tour de SiiHasin when he was in his mid-teens started the Rezduro, known as the first enduro race on the Navajo reservation.

All three programs are growing interest and showing there has been an unanswered demand for mountain biking in the Navajo Nation.

Tom Riggenbach, leading a bike movement on the reservation

Tom Riggenbach has lived on the Navajo Nation reservation for 35 years. Originally from Illinois, Riggenbach moved to Shonto, Arizona sight unseen after he graduated college to take on a job as a teacher. He now organizes the Tour de Rez, which has morphed from a few folks trying out bikepacking across the reservation before its heyday to a series of five different events including the Chuska Challenge, the Beclabito Bike Race, and more.

Riggenbach described the first Tour de Rez as “winging it” for a good cause. “We basically just took off from Shonto and our goal was to do fundraising for some community programs. And at the same time, we were trying to see how biking might go.”

They left Shonto and rode to the southern part of the reservation, and then to Window Rock in the east, and then through the Chuska mountains. “It ended up being a great ride,” he said. They did it again in 1992 with a group of young riders, and by 1993 it became an established event. In 2019, the Tour de Rez transitioned from the weeklong ride into the series of race/rides starting in March and stretching through the long, hot summer. The Chuska Challenge is the exclamation mark on the season and happens in the final weekend of September with both ride and race options, with route choices ranging from 15 to 55 miles long.

Riggenbach says The Chuska Route, an 80-mile route that can be bikepacked, is a fresh option for people who want to explore the reservation by bike, since private land can interfere with riding, and singletrack is few and far between in the Navajo Nation.

Though the reservation still appears rugged and vast, the infrastructure isn’t necessarily bike friendly. In Monument Valley, where he lives now, there is a 17-mile road that riders can share with vehicles, but mountain bikers are encouraged to go to Moab. Riggenbach says that reservation residents have used bikes as tools for tracking livestock, and cycling is growing, but even commuting with bikes is challenging since towns are spread so far apart. Hiking and mountain biking opportunities on the reservation are growing though. Riggenbach shared this Navajo Nation trail guide which highlights important etiquette rules, trail networks, and the Chuska MTB route.

In light of health issues common on the reservation Riggenbach’s hope, along with the Tour de Rez and Navajo Yes, is to “create communities where wellness is kind of the default option for families and folks in these communities so that it’s easy to be active and fit.” 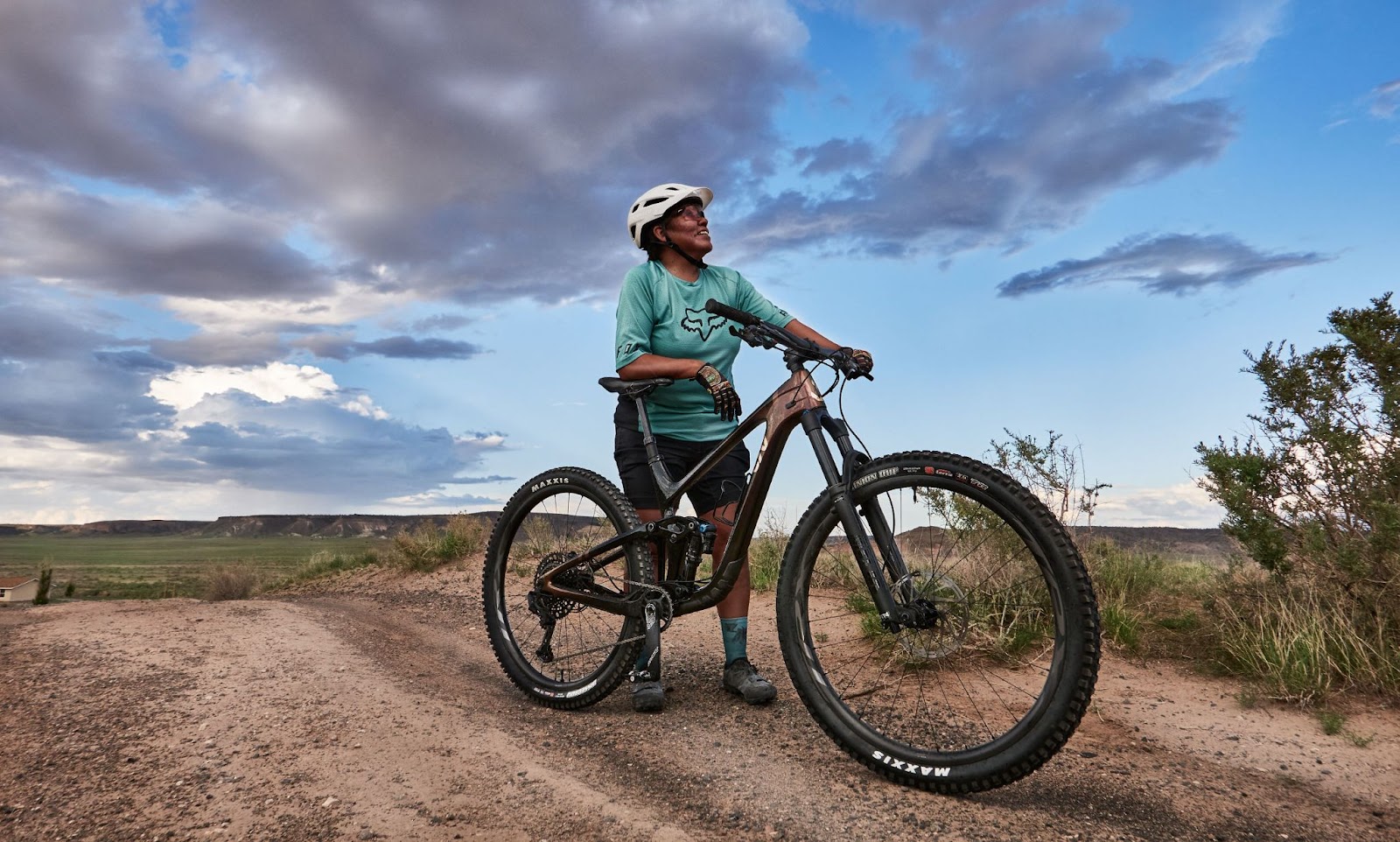 Claudia Jackson has come to be known as “the bike lady” around Indian Wells, Arizona in the southern part of Navajo Nation. When we spoke, she was in go-mode planning the Tour de SiiHasin, an annual bike tour around the reservation meant to bring awareness to suicide, substance abuse, domestic violence, and environmental issues on the reservation. The Tour de SiiHasin was inspired by the Tour de Rez after Jackson rode it one year. Jackson tells people if they can do the bike tour, they are capable of anything.

“I found that SiiHasin could stand for what our ride was about,” said Jackson. “You come in and bring something you’re dealing with but you leave with some type of peace or solution at the end.” The word SiiHasin roughly translates to “hope” in Navajo, and she found by asking elders in her community that it can mean a number of things, like nirvana, or finding peace in struggle.

Jackson started the tour in 2012. Ten years later, the ride is going strong and Jackson leads the Tour de SiiHasin and other bike programs on the reservation. It begins in Red Valley and ends in Twin Arrows, and each day involves riding anywhere between 14 miles and 60 miles, for a total of 400 miles over the course of 11 days.

Since starting the Tour de SiiHasin, she has left her former position working as a tribal councilperson for the government. Along with the Tour, she has been growing opportunities for women on mountain bikes and bike-optimized trails on the reservation. After garnering bike donations from Specialized and courting interest from potential student athletes, Jackson helped land cycling programs in Indian Wells schools along with some of the first mountain bike specific trails in the area.

Singletrack options are slim around the reservation.  “We have to travel far to get to a singletrack trail,” Jackson said. Her team would regularly travel to Flagstaff to ride. Otherwise training took place on cattle trails and dirt roads.

The red tape and bureaucratic layers of land management on the reservation make it hard to approve trails. The process starts at the community level and moves up regionally to the Bureau of Indian Affairs and must clear several channels. “It’s a huge process,” Jackson says.

After launching the SiiHasin bike team however, and working as a board member for the Holbrook School District, Jackson spoke with Indian Wells Elementary about developing trails on school property. The school could allow trail construction because cycling was a school program. Jackson hopes the trails will open in July. Running and basketball are by far the most popular sports on the reservation, but the bike programs are attracting more and more people, and even parents are getting involved as coaches.

The first is a beginner level trail, good for kids on Striders, and the second will have some bermed turns and rollers. They won’t be extensive — both trails will be under a mile long, but Jackson is excited since this is a brand new type of trail for the area and she’s hopeful there will be more. She’s thinking about how exactly to celebrate the openings.

“I mean I wouldn’t have tried to make a big deal out of it,” she said. “Just create some trails where we can ride bikes. But then when people come and say, ‘oh my gosh, this is something that nobody ever has done.’ So let’s make a big deal of it. And I just thought oh yeah, we should.”

Nigel James, 18, first caught onto mountain biking through the Tour de SiiHasin in 2016 before a mentor, Vincent Salabye of the Silver Stallion introduced him to enduro riding. James knew early on that he loved riding his bike, but enduro quickly became a focus.

Salabye and James would ride and session rocky features and drops around the reservation, said Germaine Simonson, James’s mother, and then James traveled with Salabye to Sedona, Phoenix, and Tucson to ride the technical, rocky desert trails down south. Before long, James toed the line and started racing regional enduro races.

James noticed something at the races; most of the athletes were white and well-off. There weren’t many, if any, other indigenous racers, and there weren’t events like this at home on the reservation. James wanted to bring a race back to his home in Hardrock, Arizona, south of Monument Valley.

At home on the family’s land in Hardrock, James started utilizing some of the existing livestock trails, adding features, but being cautious about modifications to the land. He wanted to host the Navajo Nation’s first enduro race.

“We’re trying our best to not alter the landscape too much because we’re in a drought situation here and we have to be really conscious of what we do with our land,” said Adrian Herder, James’s uncle and the event organizer. There are some challenging sandy trails and faster clay trails.

James is encouraged to speak with his grandparents about any potential changes to the landscape. A small change could yield big consequences.

In 2021, the Rezduro held their first event. The race was invitational only to be respectful of Covid policies on the reservation. About 55 people showed up. This year, Rezduro already has that many registrants and they’re hoping to have close to 100 more athletes. James’s mother has been organizing the event too. She is trying to garner more sponsorship since the race is relatively far for most people to travel, and since they will have more participants, the costs inherently add up.

Simonson has noticed that with the growth in bike programs across the reservation, James has found more people to ride with than ever before, but there is still plenty of opportunity to grow mountain biking in the Navajo Nation.

“All these bike programs happening, they’re all very good and there definitely needs to be more,” said Simonson. “The reservation is very big, and I like that there’s different flavors, different opportunities for whatever level and style of riding you want to do. And there could be more. We just need more people to step up to get the programs going.”

Gear
These MTB Deals are Fire, including 40% off Patagonia Dirt...
Gear
Mountain Bike Tire Repair Tips: From Emergency to Semi-Permanent
Gear
Never Underestimate the Power of a Good Zip-tie
Gear
The Maxxis Minion DHF Tire is Still the One to...
Subscribe
Login
Please login to comment
1 Comment
Most Voted
Newest Oldest
Inline Feedbacks
View all comments

That is pure awesomeness! Something that so many of us take for granted can translate into so many happy people having a good time can be contagious. A great pathogen to make into a pandemic is the bicycle!