Loop
Trail Description
About this trail
The Connector Trail (rating 2): From the shelter #1 parking lot go north on the paved path Just past the first turn on the right side of the trail is the entrance to the trail that connects the parking lot with Hank and Eddy. Just past the powerline crossing this trail intersects with Hank.

Eddy (rating 4-5): This is an advanced trail. Ride within your abilities. From the intersection of the connector and Hank, make a hard left then left on the paved trail for .2 miles to Eddy which is on the right. Just across the creek are the two log obstacles with optional lines around them. About a mile from the creek is an intersection, either direction will take you around the loop and back to the intersection. Going right is more difficult as it will take you up Killer Creek.

Hank (rating 2): This is a beginner/intermediate trail. Beginners may find the rocky sections moderately challenging. Keep going straight from the connector along the rock wall After you ride next to and then over the rock wall you will come to a three-way intersection. Either direction will take you around the loop and back to the intersection.
added by boffmam 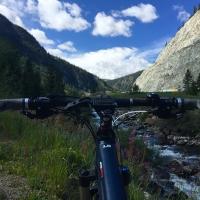 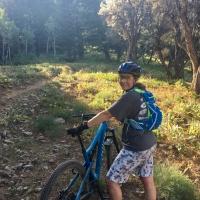 Review: The Hank loop wasn't very technical, which made it a lot of fun to ride. It's a hike to get here from the city, but worth your time if you bring some food and stuff to make a day of it.

Review: Not a ton of distance overall, but it's a nice trail to throw into the rotation every so often if you live in the KC metro area. Not much elevation gain for the most part, although if you cross the creek and head up Eddy, then you get a little technical climbing in.

Pretty fair amount of rocks to contend with, but other than the hard-core rocks on the Eddy section, there's not too much that is overly intimidating. There's enough low-intermediate track to take a newer rider, but enough rock to give a more advanced rider a little challenge to keep it interesting.

The fact that the trail sits pretty far to the southwest side of the metro area means there's usually not much traffic (bikers or hikers) to contend with. The major downside to me is the horrendous amount of chiggers during the summer riding season. My last 2 summer rides there left me badly eaten up (even with insect repellant). I conscientiously avoid the trail now during the summer months, which is a shame because it's fairly close to my house and a mostly enjoyable track to get a quick ride in after work.

Review: I adore this trail. On the route I ride here, there's just enough roots and rocks here for a beginner to practice technical riding without being overbearing. You can pick up a ton of speed in sections, and there are some spectacular views along this trail. Best of all, it's very hidden, and the trails are often mine alone.

Review: The Connector, Hank and the newly opened Hiking trails to the north of Hank are good, mostly flowing trails that intermediate riders and beginners who are looking for the next level challenge, will enjoy. There are some what I'd call moderately technical areas, along the Connector Trail that have rocky features alongside a drop-off.

Eddy... is a different beast all-together. It is not directly connected to the first system (Connector/Hank/Hiking) that you access from the parking lot. You'll need to follow the paved trail from the Connector to it's entrance and cross the creek to begin Eddy. Eddy is littered with rock gardens, logs and very tricky terrain. The term "ride within your abilities" most definitely applies to Eddy.
These are all well marked and maintained trails. Be sure to check trail status, as these trails are usually one of the the last to reopen after a rain.

Review: This was a fun trail. Some fast sections to get you loose, then the roots and rocks give you a jolt. Nothing to challenging but gets the heart pumping. my time ran short so I had to pass on the lower trail. could expand a bit to see more of that rugged landscape.

Review: Good trail. The rocks just keep coming. It gets frustrating in some places, but always challenging.

Review: Nice trail for the area. There are some lightly challenging roots and rock, but nothing too treacherous. It's easy to maintain flow on this trail and enjoy the few minor technical obstacles that come your way. There's not much in the way of hills and it doesn't last long, so multiple laps may be in order if you're looking for a workout.

Review: This is a nice trail. For some reason I only end up here in the fall with 4 inches of leaves on the trail, which makes it hard to give a great review because I'm basically just trying not hit unseen rocks and crash. The loop closest to the trailhead is what I normally ride. I've tried to cross the stream to go to the eastern trail, but always turn around at the long rock garden because I can never get through it. It sounds like they're opening up a bunch of new trail out here by allowing bikes on the "hiking only" trails, so I hope to check that out soon.