Other
Trail Description
About this trail
The trail starts at the West side of the parking area and follows great singletrack for the first several miles. As the trail curves South it enters a steep canyon and follows the river as it drops towards the town of Hermosa. There are several trails that cross this area, about 6 miles in you'll cross the Salt Creek trail, this has been well labeled in the past. There are some (3) river crossing, most have footbridges, and several small drainages. Hermosa Creek Trail drops about 1,500 feet total with 2 longer climbs occuring towards the end of the ride. This trail is a Point to Point with several options for leaving cars at the trails end. Usually the town of Hermosa is a good place, and you pass it on the way to the trailhead.
added by Jasonrgilbert

Q: how many hours to descend one way? -Guest Review: Mid-August 2014 we took a Saturday off between kayaking to bike the trail for our second time in five years. Used Hermosa Tours van, who we met on a pullout (near pavements end) down on the gravel exit road. Shuttled ($25pp) to the top of DMR for the 5 mile flyin' ride down the gravel road to the trailhead proper. Trail was mostly dry with scattered mud holes in shade, or where it collects in low drainages - your bike will get muddy. Encountered few on the trail for a Saturday, a few mountain bikers heading each direction along with a couple motocross. Second other reviewers caution to be prepared to fix your own problems out on the trail. And take plenty of water; most of ride's first half you're in the shade; afternoon in the sun - we each drank over 100 oz.

Took us six hrs to cover the 27 GPS miles we logged as we dawdled along. Hermosa Tours said the average ride duration was 4-5 hours. Middle section is the sweetest. We remembered it would be a grind climbing out the last third or so; but didn't vividly remember how much of a bitch it would be. Several times you think, "Ah, this is must be the top" spying an upcoming downhill, only to go a short distance and resume climbing again. Great ride, and you earn it even if you do take the shuttle

Review: First off, go to Pedal the Peaks and buy the Singletrack Maps Durango Colorado Trails map. It's worth every penny. Also, Cliff is the shop owner and he is a wealth of information!

We rode this trail the last weekend of April 2013, and it had just opened.

My buddy and I chose to do an alternate start and ride down Corral Draw for the first section of this ride. However, he was concerned about his Subaru crossing Hermosa Creek on Local Road 550, so we had to Death March it the rest of the way up. That took a lot of the fun out of our day.

But, Corral Draw was awesome! 4-inch wide, off camber trail, all gradual downhill, for over an hour. I have never been that focused on a ride! If you did go off the trail, there's nice soft grass, but you'd take quite a tumble! Every now and then there's a little rocky section to keep you on your toes!

We cross the creek and joined up with Hermosa Creek trail. It was mostly fast and open, with little rock gardens here and there that we just blasted through. This was an amazing ride until the last 25%, which was mostly constant uphill for a long time. We were toasted from our Local Road 550 climb, and this uphill was NOT welcomed. I have not suffered like that in a long time, if ever. Eventually it became an effort even to push my bike. We got back to the bottom of the trail, right at dusk.

Overall, this was an amazing ride. But, if I did it again, I would insist on driving all the way to the top. That Local Road climb was not a good way to start the day.

Also, keep in mind, this is a long back-country ride with consequences if something goes wrong! Be prepared!

Review: This is a trail that has a couple personalities. The middle portion of the trail, from the Salt Creek Trail intersection south to the Clear Creek Trail intersection is the poster trail for sweet singletrack. Nice and narrow with fast, long sweeping turns. Plenty of ups and downs to keep you entertained and you never feel like you are burning off hard won elevation gains in your brakes. Probably some of the best cross-country singletrack around.

The portion of the trail from the north trailhead down to the Salt Creek trail is ATV doubletrack, is full of exposed rocks, and just really isn't that much fun. The southern portion, from the Clear Creek Trail intersection to the southern trailhead is good, but is a lot wider since it is popular with equestrian and motorcycle riders.

Personally, I like to ride it as an out-and-back from the southern trailhead. That way you can enjoy the best singletrack from both directions and you don't have to bother with a shuttle. Riding north to the Salt Creek Traill is good enough, but if you feel like earning a full merit badge you could ride all the way to the top and back.

Review: We opted not to shuttle to the top and instead ride this trail up from the bottom. We went in about 10 miles and made it an out and back. This is a good option, but probably not what Hermosa Creek get's all the attention for. Spring for the $30 and shuttle it up. Amazing scenery and singletrack.

Review: Who was the shuttle through?

Review: Hermosa Creek Trail needs to be on your must ride list. This is a shuttle ride. If you are having some one drop you off, they need to occupy themselves for about 2 hours. I live at sea level and the two end of the trail climbs are a challenge. The shuttle, park one car at Hermosa off of 550 and drive the second further north to the ski resort and drive through the ski resort, follow the signs for Hermosa Creek Trail and park at the crest of the gravel road. ride two miles down the gravel road to the sign for Hermosa Creek Trail. There is a ridable creek crossing and the single track down hill starts for 9+ miles. the views are amazing. the trail can be wet. There were thuderstorms everynight while we were in Durango in mid-July which made the trail muddy but fun. Review the trail map as there are a couple of climbs at the end but more excellent down hill riding. almost all single track. Once at the trails end, there is a very long steep downhill gravel road and then a paved road back to Hermosa. We recorded over 22 miles of riding not counting the 2 mile road from the car to the trail

Review: Tough trail, lots of fun. Rode this when I was a super green rider and it was very hard, I'm sure if you have lots of time in the saddle you will be perfectly fine.

Review: Hermosa Creek Trail, listed as one of the Top Ten Single Track rides in America by Mt Bike Mag, is a must ride. If you are ready for an ALL day ride you can start from town and ride the 25 miles up Hwy 550 to Purgatory and up and over Hermosa Parkway, down to the trail head. 23 miles or so of sweet single track, back to Hermosa, and then road burn 8 miles to town. All told you would do about 55-60 miles and cover about 2500-3000 feet of elevation gain. An easier way is to either get dropped of at the top of Purgatory and ride back to down, or leave a car at Hermosa. Anyway you do it, this ride ROCKS! Be aware it is mostly downhill from Purg, but there is a 2 mile climb out of the canyon at the end.

Review: Awesome Trail!! rode this 3 weeks ago with a few friends.
There is a great alternate way to start the trail and it adds a few more single trail miles to it. Recommend to leave car in hermosa and shuttle up the the described T-junction (this is pretty much the crest climbing from Purgatory up to the Valley. (E.g. Durango Mtn Resort offers shuttle services) ride the dirt road down into the valley, then take a left towards the skilifts. you can find the trail on the Latitude 40 map "Seth's trail". it may be a bit hard to find in places (especially after the 2nd skilift), but if basically follows the trees on the south side of the valley. you will eventually get to the same parking lot descibed as starting point.

Review: Starts on double track to the creek and then downstream for a few to singletrack. The trail useage is high, espically early. When singletrack you'll climb and descend the canyon walls several times as you head downstream. 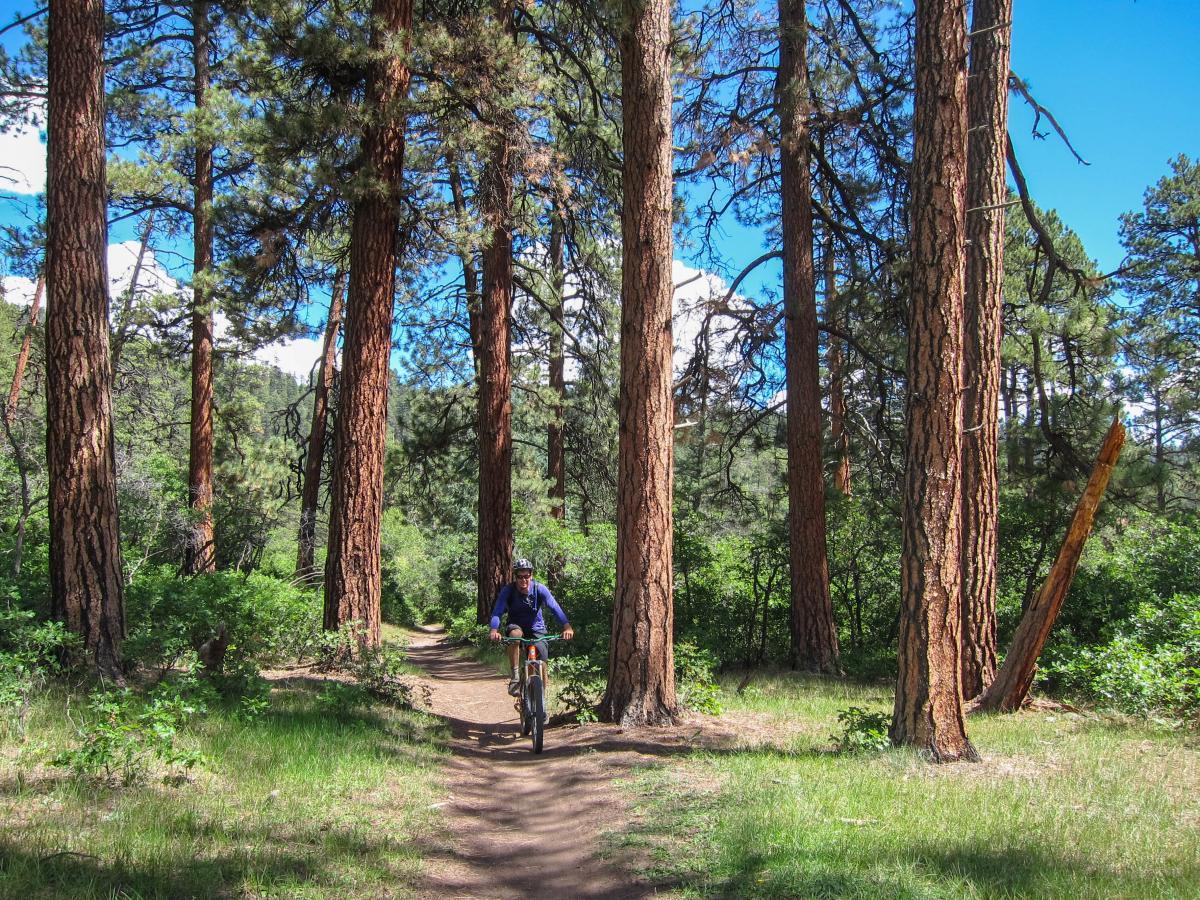