Born to Run was on the radio when I was a kid. Am I too old to start jumping a mountain bike?

My wife and I have always tried to share as many pastimes as possible. I love bikes and enjoy being in the woods. She loves the woods and enjoys riding bikes. Mountain biking seemed like a great way to excite both of our passions.

But I was 54 and she was… a little younger. Were we too old to start?

Fortunately for us, the bike shop didn’t ask for an ID, and no one at the trailhead asked us if we would prefer an adult tricycle and a nice paved trail. So off we went.

It’s now 18 months later and I can tell you the answer is emphatically no. We are not too old.

If you are new to the sport or considering giving it a try you will be pleased to know that there are trails for all skill levels. You can literally ride a bike on a smooth dirt path through the woods, roll over roots and rocks as you go up and down reasonable hills, or pitch yourself through an amazing variety of terrain including the smoothest terrain of all… air.

It really is up to you and you can progress as much or as little as you prefer to find your sweet spot.

Just a few weeks after we started this new adventure we decided to make the 90 minute drive up to Santos to see what a Bronze Level Trail Center has to offer. It was there we encountered THE GAME CHANGER: progressive jump lines.

A progressive jump line is an area with a few jumps, typically from three to six designed so landing one jump sets you up for the next one. One line will have small, beginner jumps, the next slightly bigger, steeper and or longer jumps, and so on. It lets riders build confidence and skills on the smaller line before moving up. It was here my wife found something else she loves — getting air on a bike. 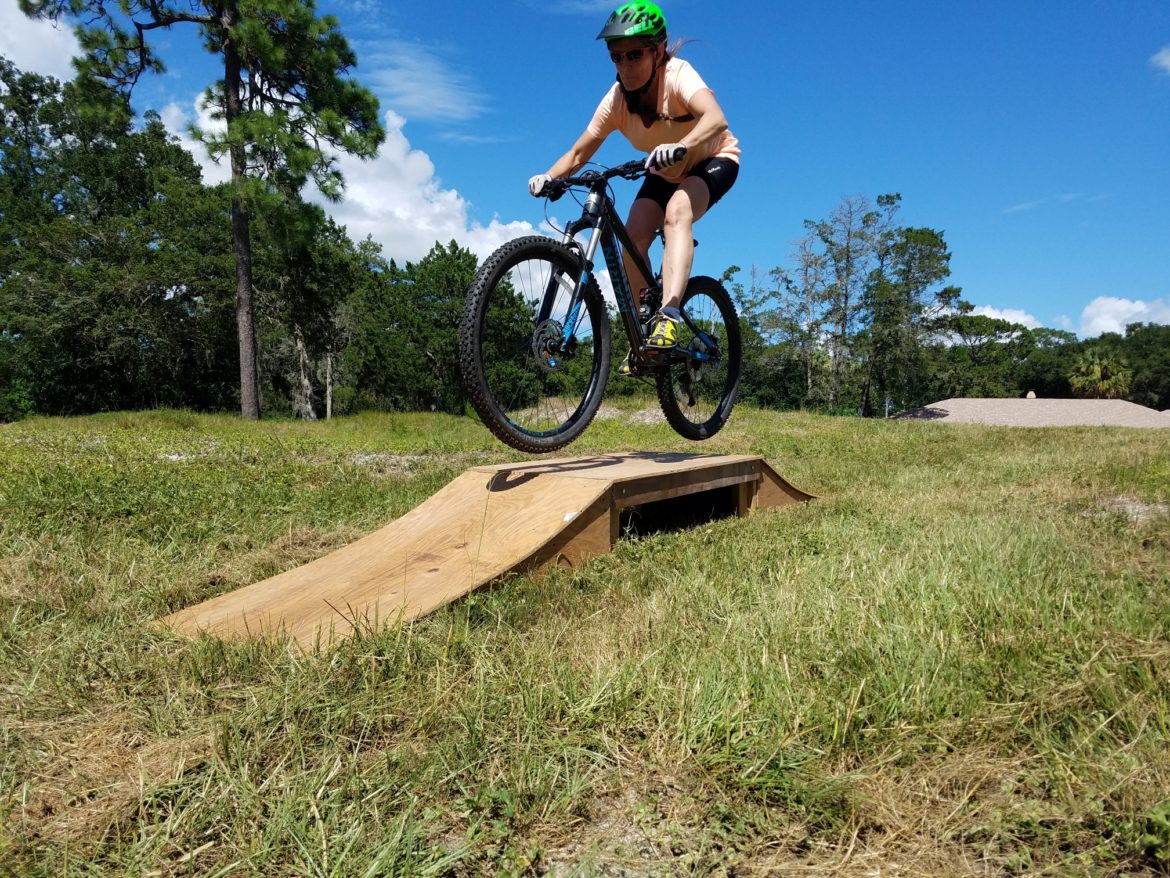 Not being one to discourage any new interest, I quickly did a little study on ramp design and built a 12-inch high jump with a 4-foot table and a landing ramp. I mean like literally, the next day. When an opportunity like this comes up you do not wait around to see if it will pass. Statistically speaking I have half as many todays left as a 34-year-old, so I can’t waste any of them. We set it up in the grass (please start on grass or dirt) on the fairway down the street, and the learning began.

The earliest sessions involved systematic desensitization. That is just a fancy way of saying we rode over the 12-inch table jump repeatedly, increasing our speed but staying on the ground. The idea is to get used to riding toward a jump at speed and not tensing up.

Pretty soon though, the front wheel was leaving the ground. It was a little freaky feeling at first, but with more repetition you begin to think of that as normal which allows you to relax.

Guess what happens next? You sail through the air just like the guys in the video and start working on perfecting your tail whip. Uh, no.

What can and often does happen next is you start trying too hard, over thinking it, pulling up with your arms, landing crooked. 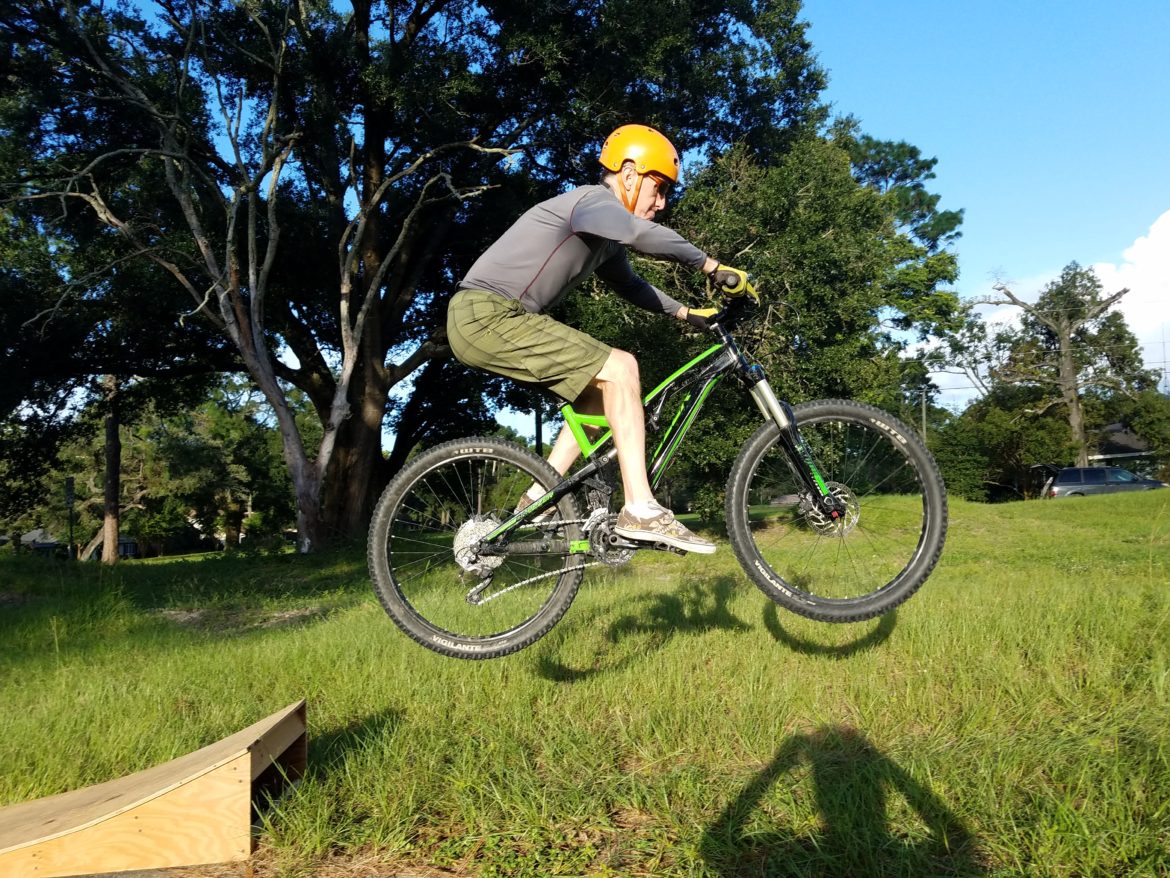 Once we realized we needed to learn a little technique we turned to the web, read some articles, watched some videos and tried to apply some of what we learned.

The key concept is to understand what it means to ride with light hands and heavy feet. Keeping your weight centered over the bottom bracket will keep you a lot safer than doing otherwise. This applies to many more situations than jumping by the way. I think mountain bikes should come with a sticker on the top tube that says this.

Armed with this information we kept on practicing. Soon we were both happily casing the jump and celebrating the 3 inches of air we could see under our back tires.

Casing, by the way, is when you don’t clear the whole flat part in the center and land on it instead of on the sloped down landing section of the ramp. This center section, called the table, is there specifically so you can land on it with the only ill effects being a bumpy landing and a bruised ego if your friends (or wife) are watching. Not that she would ever mock me.

You should know by now I’m a big fan of repetition. We would set the ramp up two or three times a week and hit it until we started making the same mistake, usually launching or landing crooked. This was a sure sign of fatigue. Most nights this would mean 50 or more passes for each of us. The benefit of all this repetition is the development of muscle memory (I am a true believer) and the fact that, when you do something over and over it becomes less intimidating. Jumping is one activity where it pays to be relaxed and confident.

I can tell you now, if you are willing to put in a little time and effort this level of jump proficiency is within reach of most people who can ride a bike off road. Yes, even if you are old enough to remember when Fly Like an Eagle was released. Even a little air is a ton of fun.

We are both riding what are considered beginner-level, full suspension trail or all-mountain bikes, so you don’t need any amazing gear to get started.

These days, my homemade portable jump line consists of an 18-inch table jump, 12-inch-high table jump, and a 12-inch kicker for hucking to flat. We set the kicker up several times a week just for the guaranteed grins. Did I mention we love to jump?

Beyond the ramps, jumping can add a new dimension to your local trail. You will never look at a root or rock the same way again!

Brent Carter
Not much is known about Brent Carter, though the legend grows each day.