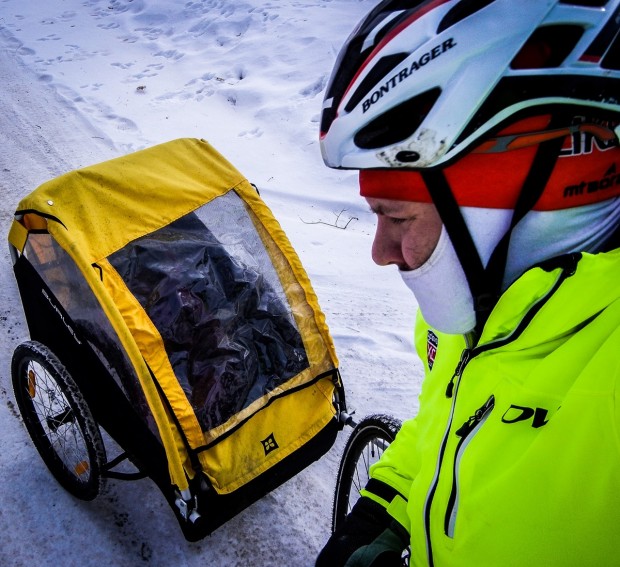 One of my responsibilities as a work from home dad is picking up my kids from school every day. We’re a one-car family and my wife needs the vehicle for work, so that leaves me with a great excuse to ride my bicycle!

Here in northern Wisconsin, we sometimes have kind of intense weather. Wisconsin is one of the few places on Earth where people will exclaim, “it’s freezing” when in fact the temperature can be 40 or 50 degrees below freezing.  In all honesty folks, 32 degrees is pretty balmy, and kind of boring since your likelihood of death by hypothermia is so low.

It’s only a 20-minute round-trip ride to my kids’ school, so it’s not a “real” workout. On these rides I wear an extra warm “coach’s jacket” by One Way. I like it for the color since it’s especially important that cars see you when you have your kids in tow, and the roads are covered in ice. My already low patience for having cars mess with me plummets when my kids are along. Mainly I avoid the roads, but minimal interaction with traffic can’t always be avoided. If there isn’t a snowstorm raging, we’ll take extra loops. 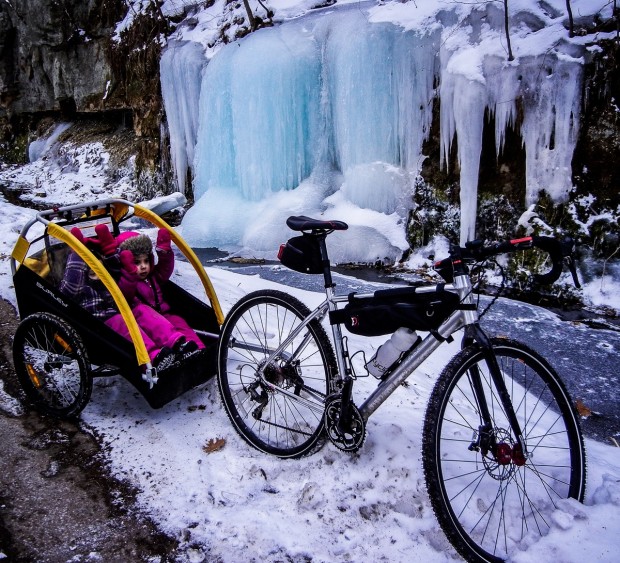 Lately I’ve been finding myself on the Crossrip more often than the mountain bike, but either one is just as effective for this kind of ride. Near my house there’s a park with some spring-fed stone cliffs that create nice ice stalactites in the winter. I pulled up to a formation, dumped the bicycle in a snow pile, and said, “kids, lift up your arms!” I thought the action would make the photo more exciting. They instantly did it, of course, without questioning me.  Kids are awesome.

As I was taking this picture, an older guy came walking by. He must have been on vacation because he thought he had cause to berate me.

“Those kids are going to freeze to death in there!”

What the heck? I’m willing to bet the guy was on his way to his favorite coffee shop where he sat around grumbling about “kids these days” and how they spend all their time “frying their brain with video games and TV.” Sure, but If I decide to take my kids ice biking on a lovely winter day, I’m the bad guy.

“They’re fine in there,” I replied, “it’s got a wind shield and they’re wearing snow pants.”

“Do they have a heater?” he persisted. “How do you know they’re OK?”

I put my hand to my ear, “Do you hear anything?”

The guy shook his head in the negative.

That was enough for him and he wandered off. I took the time to snap a photo of my awesome Gravdal tires from 45NRTH, which make winter riding possible. 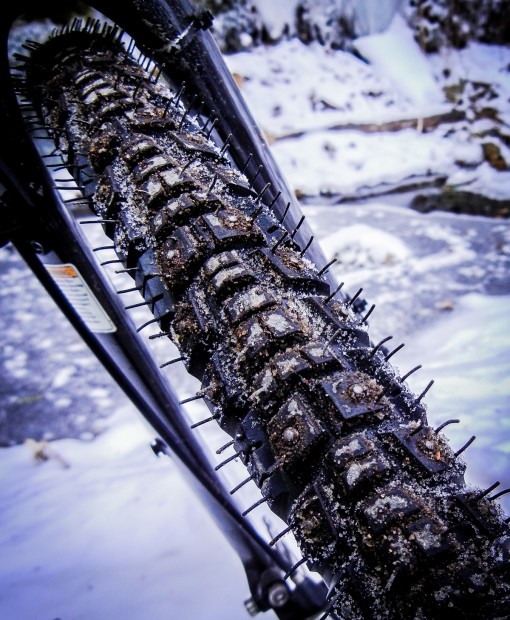 The studs on these 700x38s will take you right up an ice wall if you want. Cornering can be a little sketchy, but if you’re going in a straight line you can ride across a lake.

This is the first year I’ve had a child in school, and the brunt of winter is now over. Let me assure you all that it has been an absolute joy doing a daily ride with the kids throughout the cold season. Don’t listen to naysayers. The Burley is the first step in manufacturing the next generation of cyclists! My kids love it!

How could they not love it? Natural ice sculptures and bicycles are beautiful! 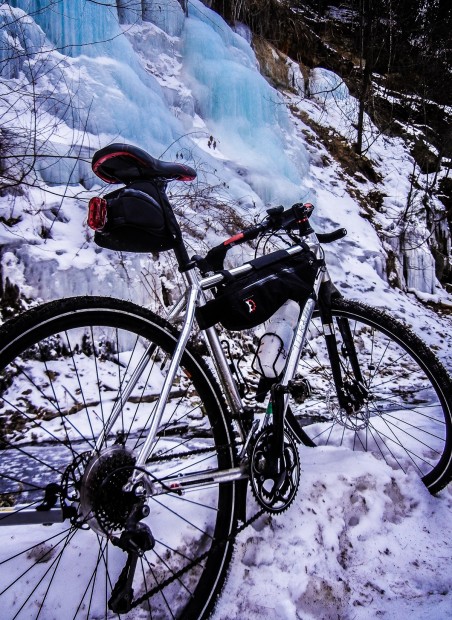