It’s hard to believe that 2013 has already come and gone! I don’t know about you, but my 2013 was packed from beginning to end with awesome, unique mountain biking adventures! With over 3,500 miles of riding (road + mtb), I covered a lot of territory and accomplished quite a few goals.

Without further ado, here are some of my mountain biking highlights from the past 12 months:

One of my main goals for 2013 was to complete a dirty century, and my training actually started in the last couple of weeks of 2012. However, once January hit, training began in earnest–both on the mountain bike and on the road bike.

Training continued to heat up in February as the temperatures dropped, and even North Georgia snow couldn’t keep me off the trails:

Jeff and I also attended the Southeast Bike Expo in late February: 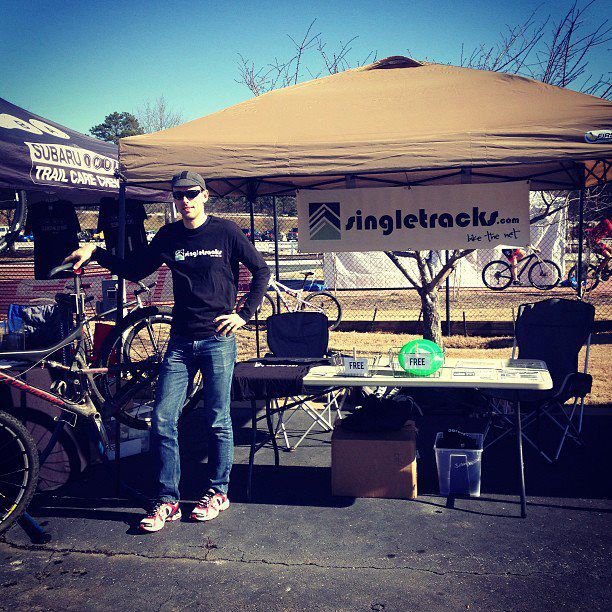 March was full of long, arduous training rides, despite a week off the bike due to sickness. After getting tired of riding my local trails day in and day out, I traveled around North Georgia quite a bit in March for a change of scenery. Thankfully, I was able to recruit some friends to suffer with me on my long rides.

While my dirty century hadn’t arrived yet, I did one of the hardest mountain bike rides of my life at the end of March. While only 67 miles in length, the rough trails and crazy 10,200 feet of climbing made this ride absolutely brutal:

Check out this article for a blow-by-blow from that arduous training ride.

There were plenty of training rides with friends in April, including some gorgeous road rides:

We also dropped by the Ales for Trails fundraiser in Atlanta at newly-opened Monday Night Brewing: 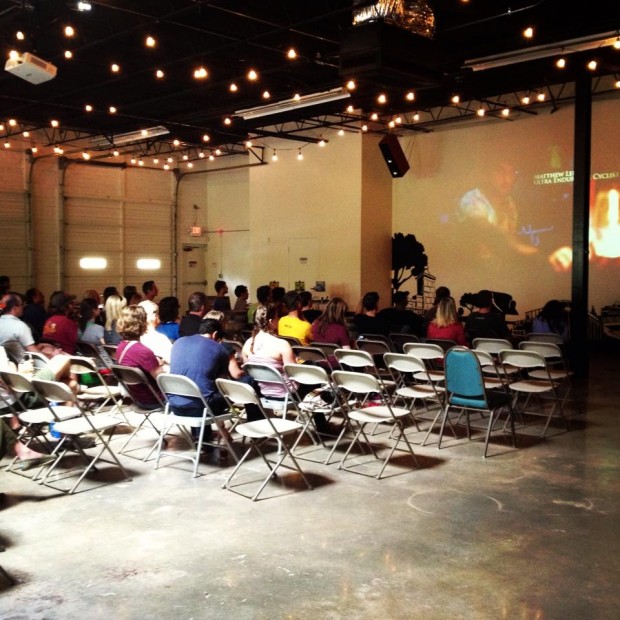 But the big event in April, that I had been training for for over 4 months, was the Cohutta 100! To read how the Cohutta went, check out this article.

While being defeated by the Cohutta was frustrating, there was no way that one DNF would keep me from completing my goal! After about a week of recovery from the punishment that the Cohutta had doled out on my legs, I stocked up my truck as my personal SAG station, drove out to my local trails at Bull Mountain (home of the Fools Gold 100) before sun-up, and dropped the hammer. Over 100 miles (Strava cheated me), 12+ hours (10:23 moving time), and 13,000+ feet of climbing later, I had completed my dirty century milestone!

For more details on my 100-mile ride, check out this article.

Just a few days after completing my dirty century, I accomplished another major life goal: I finally graduated college with a BA in English with a Writing and Publication Emphasis. Then on the Monday following graduation, I started full-time as the Editor in Chief for this fabulous website!

Later on in May, I hopped on the Superfly to race again, but this time it was just a short cross-country race in Richmond, Virginia at the Dominion Riverrock Festival. I finished this time, but got caught in the rain again: 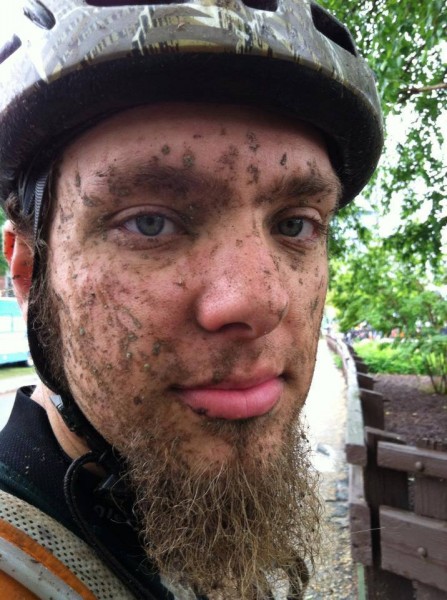 I had many other great mountain bike adventures in May, including a great trip to Pisgah National Forest (one of my favorite places to mountain bike EVER) in North Carolina: 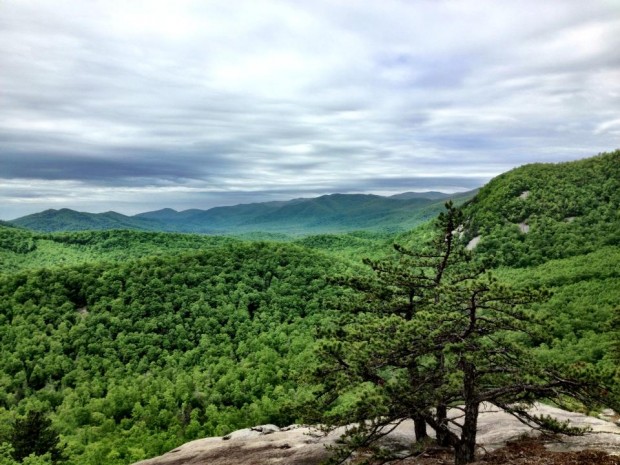 June began with my first completion of the 6 Gap Century road bike route. While this 100-mile ride was on pavement, with over 11,000 feet of climbing 6 Gap is no joke!

This spring and summer we had some fantastic group mountain bike rides out at Bull Mountain, with new and old faces alike:

However, the group ride of group rides was the Dahlonega Dirty Thirty ride on the 22nd, which I organized. While at first I thought only about a dozen people would show up, we ended up having roughly 100 people from all over the Southeast show up for the ride! The Dirty Thirty was the funnest group ride I’ve ever been on, if I do say so myself.

July and August were full of mountain biking fun, as my wife and I traveled from Georgia to Oregon for the Sylvansport GO Coolest.Camper.Ever contest. I rode a ton of trails and met some awesome people, so I’ll try my best to keep this short. 🙂

Our first stop was Bend, Oregon: 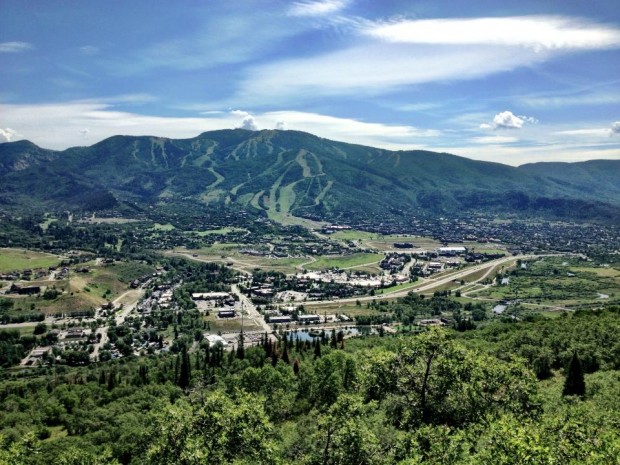 My friend Max flew out to Colorado to join me for a week of riding in Steamboat, and he snapped this shot of me: 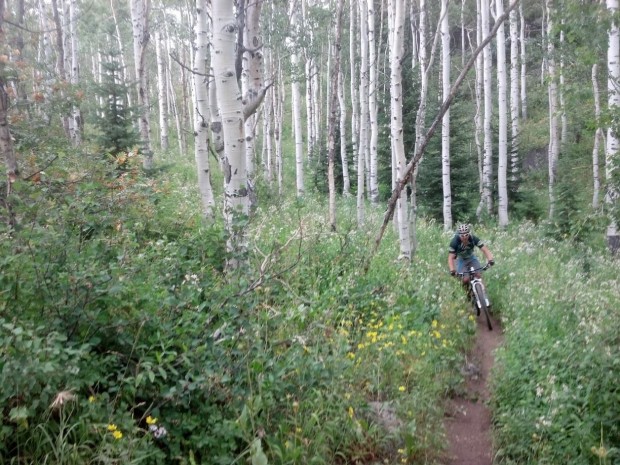 While I’ve already written several articles from my travels this past summer, I plan to complete my coverage this coming spring. Stay tuned for more details from Oakridge and Steamboat Springs!

If you thought July and August were packed with activities, hold your horses and wait for September! The beginning of the month marked our relocation to the gorgeous town of Salida, Colorado. We had spent a week in July house hunting, and the official move happened at the end of August. 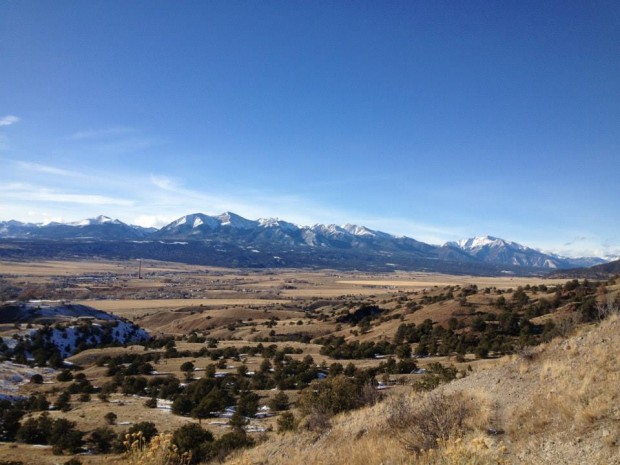 For a breakdown of why you shouldn’t move to Salida, check out this article.

The Singletracks crew traveled to Interbike in mid-September, and I also hit Fruita on the drive out and Gooseberry Mesa on the drive back.

Shortly after returning from Vegas, I hopped on a plane for the Park City media trip. While it was cold and snowy for most of the trip, it was an absolute blast all the same! 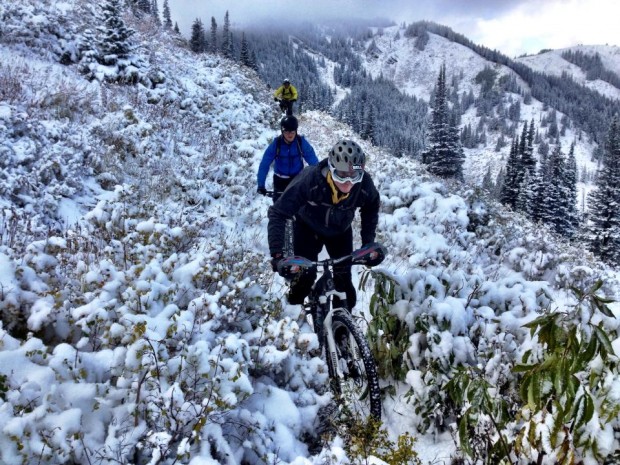 Hot on the heels of my Park City trip, maddslacker and I loaded up the pickup and headed to Outerbike in Moab. 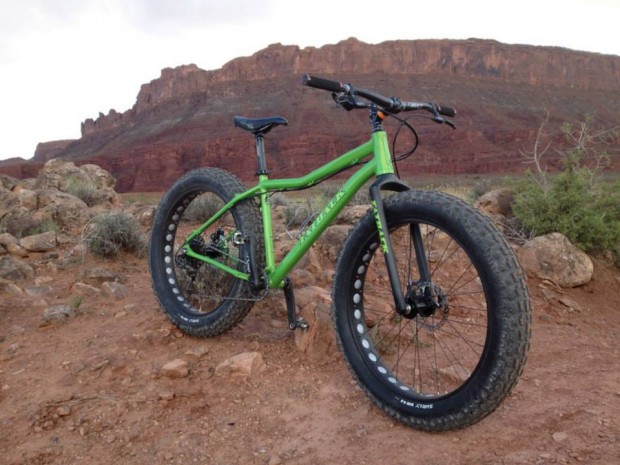 Shortly after returning from Outerbike, I got in one last ride on Monarch Crest before the snow really hit: 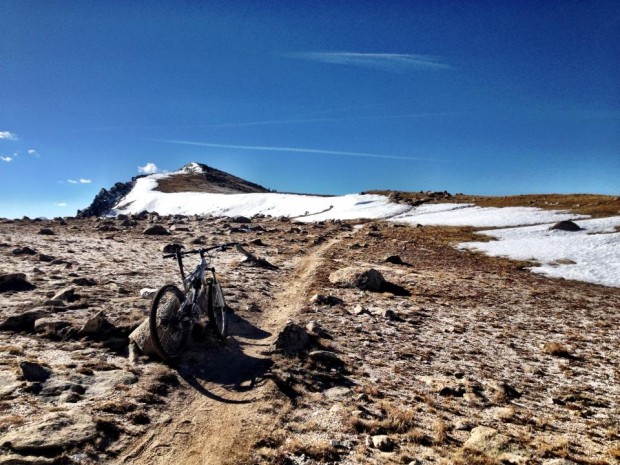 The rest of October I spent feverishly exploring my new local trails, trying to cover as much territory as possible before the snow started to pile up:

The above is a still from a video I compiled on the Uncle Nazty trail in Salida:

As the snow accumulated up high, I continued to explore by bike at lower elevations. One major highlight of the month was a trip to ride with skibum and his son, miniskibum, in Colorado Springs, which happened to coincide with my birthday:

I just kept on riding, until a major snow storm in late November quickly catapulted us from bike season to ski season. Until that snowstorm, the longest I had gone without riding a bike since the September 1st move to Salida was 2 days.

However, I was excited for ski season to be here! I skied for many years before taking up the sport of mountain biking, and if there’s powder to be skied, the bike is going to be gathering dust! After a 5-year hiatus, I was so stoked to be skiing powder again:

December is winter, and so I just kept on skiing! We had a few fantastic powder days–skiing from the Continental Divide is just gorgeous: 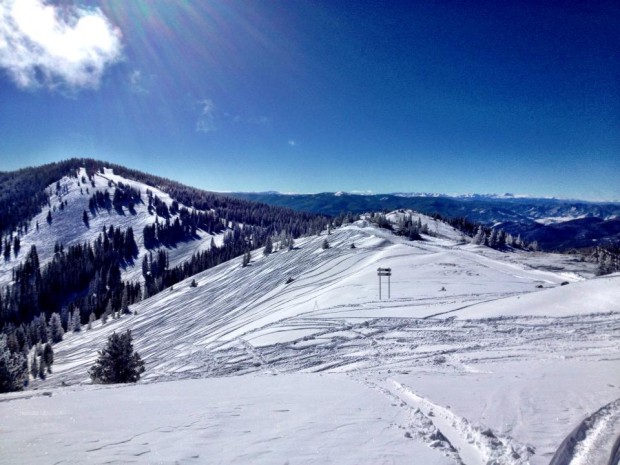 Of course, I never abandon the bike altogether. I had to review the Mongoose Salvo Expert 29er, so I got down to Oil Well Flats for a great ride: 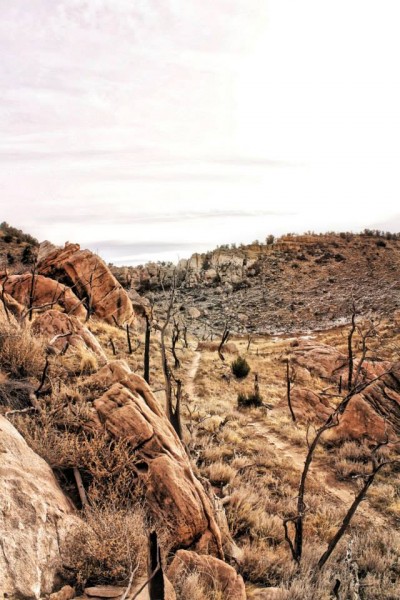 I had some great rides with friends during our holiday visit to Georgia, and then on the very last day of the year, I completed a new first: my first time skiing and mountain biking in the same day: 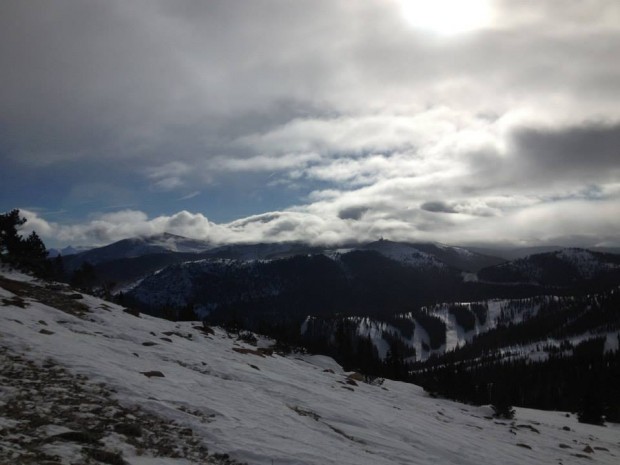 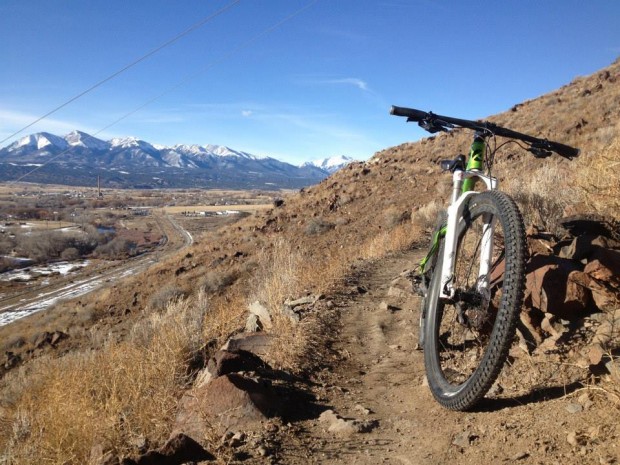 Let me tell you: spending a full day skiing and riding isn’t as easy as it sounds! Combining these two sports into a one-day event is a serious leg workout!

When I set out to recap my mountain biking highlights from 2013, I had honestly forgotten how long a year is… I’ve covered a lot of territory and had a ton of fun over the past 12 months! While it’s hard to believe that anything could top this, I am stoked to see what 2014 holds and I look forward to taking my riding up a notch this coming year

Your Turn: What were some of your mountain biking highlights from 2014?

Thanks Jeff! I expect that 2014 will be quite different, but I’m excited for what it holds!

As usual, great pics . . . and an even bigger than usual year for you! Gonna’ be tough to keep up that pace. Looking forward to seeing what 2014 brings for us all.

That reminds me . . . I gotta get Miniskibum out to Hartman Rocks!

Gregg you are an extremely hard worker following your dreams so keep it up. Your quality writing really shows the passion you have for the sport. Hopefully you can organize the Dirty Thiry again so us Eastern band of riders can ride with you again. Best of everything in 2014.

Thanks so much for the kind words, Matt! I would love to do the Dirty Thirty again… we’ll have to see what the summer schedule looks like!

I hope you have a great 2014 on the bike as well, it looks like you are off to an AWESOME start! I hope you dominate the Cohutta 100 so at least one of us will have finished it, LOL!

What an exciting year! I look back at 2013 and cannot believe all that happened in the past 12 months either…and my life has not had near as many changes as yours! Best of luck to you and keep of the good work. A lot of us really enjoy reading singletracks.

Thanks Paul, it’s been a great year indeed. I hope you have a great 2014 on the bike!