We’ve reported in the past about mainstream companies using mountain biking in their advertising campaigns, but Mitsubishi’s newest campaign might be one of the most far-reaching thus far. Instead of a single TV spot, Mitsubishi has put together an assortment of videos, complete with behind the scenes footage and more.

And while yeah, we know that we might be playing right into Mitsubishi’s hand here by promoting their ads, but with McCaul and Zink both on board, the riding is pretty spectacular! 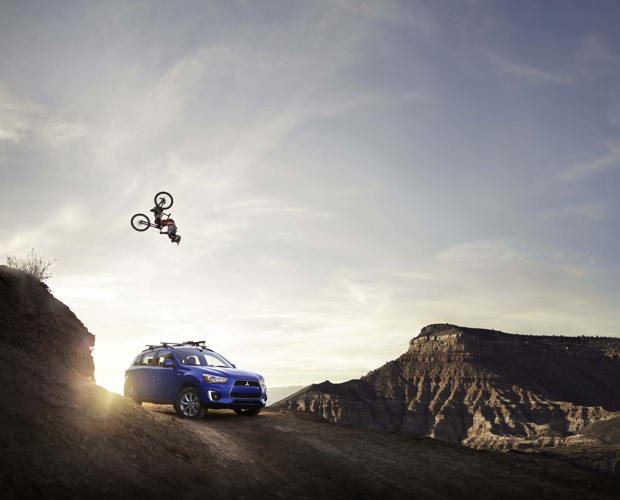 Check out the official copy from Mitsubishi, and scroll down to watch the rest of the videos:

The irony of mountain biking mecca Virgin, Utah, is that virgin territory hardly exists anymore. But for two of the world’s best mountain bikers, Cam McCaul and Cam Zink, that meant a welcomed challenge.
“When Mitsubishi called and said they wanted to do a campaign around freeride mountain biking, I was immediately on board,” says Cam McCaul. “The sport’s so up and coming that having a brand like Mitsubishi shine some light on it is huge.”
Mitsubishi set “the Cams,” as they’re affectionately known, on their way with a fully-loaded, newly re-released Octane Blue, 2015 Outlander not only find a new place to ride, but to do a trick somewhere it’d never been done before. The result was an epic flip over the very car that got them there.
“Cam McCaul and Cam Zink are all about blending style with technical ability. And that combination is a great example of what makes the Outlander Sport unique. It not only has the technology to handle the rough terrain, but it looks pretty cool too,” says Carl Corbitt, Creative Director at Mitsubishi’s ad agency, 180LA.
The culmination builds to a :30 TV spot, “Get There,” which airs nationally August 6th and goes live online today.
Mitsubishi also released today an online content series that provides a vicarious ride along and behind-the-scenes look into their adventure. It’s a compelling, and at times stomach dropping, story of the Mitsubishi Outlander Sport proving it as the tool to get wherever you want to go.
“The campaign demonstrates how we want to encourage everyone to find their own sense of adventure whether that be as big as freeride mountain biking or simply finding a new favorite weekend get-a-way spot.” says Francine Harsini, Director of Marketing for Mitsubishi Motors. “To help give this encouragement we love working with authentic talent and musicians who embody this spirit.”
Featuring the music of up-and-coming artist, Blonde Acid Cult, the YouTube content series plays like a “choose your own adventure” book, each ending with a tiled end frame of additional videos in the series to choose from. Print ads and an interactive 360-degree view of the Outlander Sport on mitsubishicars.com show fellow mountain biker Cam Zink doing similar stunts over the Outlander Sport.