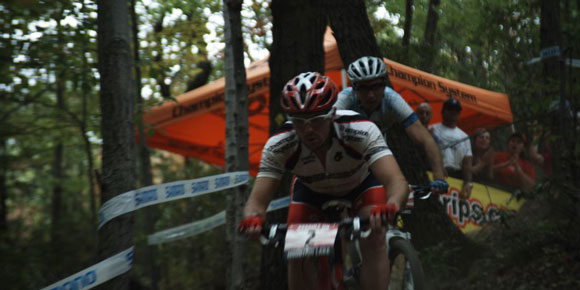 I’ve often wondered: are documentaries and shred films like the Collective series the only way to get mountain biking on screen? I mean, sure mountain biking makes a cameo in regular movies from time to time but it’s never been a central part of the backdrop in an on-screen drama. Until now. 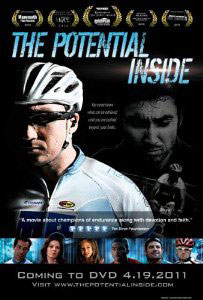 The Potential Inside is an independent film about a mountain bike racer named Chris Carmik who experiences a tragedy in his personal life and works to piece things back together while (reluctantly) agreeing to coach a mountain biking prodigy named Jake. In a way it’s sort of a classic sports movie plotline but because it’s centered around mountain biking the story has a fresh feel to it.

Director/producer/writer/lead actor Scotty Curlee is a mountain biker himself and he took real pains to keep the mountain biking action authentic in this film. Curlee even enlisted pro riders like Jeremiah Bishop to appear and act as technical consultants on the project while sponsors like Giant, Shimano, and Champion Systems provided props for even more realism. In one scene Chris pulls up in a Ferrari at which point I chuckled to myself: pro mountain bikers don’t make enough money to drive Ferraris. But sure enough, during the commentary Curlee says the Ferrari belongs to pro-rider Hunter Allen who appears in the film. Nice. Of course that realism can go a little too far – isn’t the name Chris Carmik pretty similar to another cycling coach who uses cutting-edge techniques to train elite athletes? 🙂

Much of the racing action takes place on mountain bike trails in and around Lynchburg, VA and the visuals are amazing thanks to the RED camera the crew used for filming. Some may recognize the technical side trails at Black Water Creek and the steep Candler’s Mountain trails at Liberty University making cameos in the film.

Beyond the rich visuals and exciting mountain bike racing scenes, the plot centers around the idea of individuals reaching the full potential that exists inside them. The message is explicitly Christian which might make some viewers feel uncomfortable but more broadly the theme is about dealing with tragedy and pushing oneself to his/her maximum potential. This message can be seen throughout the film; early on in Jake’s training there’s a scene where the rookie rider takes a VO2 max test and his coach explains how everyone is born with a certain VO2 max but they have to exercise to unlock that potential. It’s a cool concept I hadn’t thought about before and it’s a great parallel that mountain bikers and other athletes can easily understand.

If you’re tired of the same old MTB documentaries and shred films or are looking for a movie to share with your non-biking family members and friends, The Potential Inside is an entertaining flick. While it’s not exactly a big budget movie, the visuals are great, the action is believable, and the story is definitely uplifting.

The Potential Inside releases on DVD April 19, 2011 and you can pre-order it at Amazon.com today. Thanks to Scotty Curlee for providing an advance copy for review.

This looks like a pretty sweet movie…I have already pre-ordered. I am excited to watch, I have ridden down in Lynchburg before. My sister lives and graduated from Liberty University down there. As a christian it is refreshing to see a good movie and to top the cake its about mountain biking…awesome!