If Sesame Street were for grown-ups, I’m pretty sure that beer and bikes would be two of those things that “go good together.” This seems to be especially true of mountain biking.

You don’t have to look too hard to find proof of the affinity between these two. Peruse this website, or any other MTB medium, and it won’t be long before you find some reference to the sudsy libation so many of us enjoy. And virtually every major MTB event is fairly awash in both advertisements for the stuff and in the brown bottles of bubbly brew themselves.

Further proof of this connection can be found all across the hilly landscape of America. Every MTB Mecca on the continent has a pub where people dressed in funny clothes with muddy stripes up their backsides go to wash down the dust in their throats after a day on the trail. And it’s always beer they’re flushing their phalanges with. It’s not wine. It’s not whiskey. It’s not vodka or schnapps. No—it’s beer.

Having spent plenty of time around MTBers over the years, this comes as no surprise to me. Heck, even the folks who make the stuff know it’s true. I’ve never seen a bottle of Chardonnay with a picture of a bike on it, but I’ve surely downed my share of Fat Tire ales and Chain Breakers. What did surprise me the other day, however, is that acknowledgement of this fact has now made its way even into the technical realm of bicycle repair manualdom. 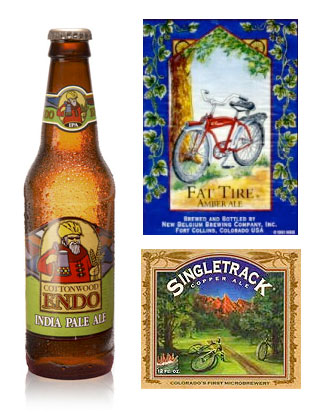 I bought a copy of Park Tool’s Big Blue Book of Bicycle Repair-2 last week, and lo and behold, on page 3 of the first chapter—Basic Mechanical Skills—I found the author’s explanation of torque values related to the reader in terms of how much a six-pack weighs! Now, it very well may be that they had in mind a sixer of Diet 7-Up, but I seriously doubt it. I suspect they know perfectly well that your average (adult) biker is more familiar with the heft of a six-pack of brewskies than nearly any other commodity on the market; and that’s why they chose “beverage” cans instead of, say, soup cans to make their illustration.

Now, If it were only this reference to the six-pack (and the half-rack, too, by the way) that Park Tool has included in their repair guide, I might harbor some doubt as to whether they were really tapping into (pardon the pun) the beer-bike relationship that’s such a prominent facet of the bicycling culture. If that were the case, perhaps it would be only fair to afford them the benefit of the doubt. Heck, maybe it was Diet 7-Up they had in mind after all! But such is not the case. No; there’s more to the story than that.

Among the vast array of specialty bike repair tools that Park Tool produces—tools such as the CSR-1 (a crown race setting tool), and the PW-3 (a pedal wrench)—they have seen fit to include in their lineup the BO-2, the BO-3 and the BO-5. No, they’re not antiperspirants made for bike enthusiasts. The BO-2 is a custom-made, high-grade stainless steel bottle opener. It sports a comfortable vinyl grip in the company’s signature blue color, and it comes emblazoned with the internationally recognizable Park Tool logo. The BO-3 is a pocket sized opener touted as a “…take along tool you shouldn’t be without,” and the BO-5 is a full-sized wall mount opener that’s “…cleverly disguised as a water bottle cage,” according to the company’s website.

For me, this seals the deal. Think about it. What other specialty tool company makes a devise expressly intended to crack open a cold one? And how likely is it that that cold one is supposed to be a pop? They’re pretty much all plastic nowadays—aren’t they? And Park tool didn’t just stop at one opener. No, they’ve got three! And one of them is “cleverly disguised” to boot. My question is this: From whom would one need to hide the fact that they’ve got a pop bottle opener mounted to their repair bench?

You’ve got to give these guys credit. I bet they’ve sold a boat load of those openers to beer-drinking, bike-riding wrench turners just like me who find a special place on their peg boards to hang ‘em—right next to their Park Tool-blue-handled cone wrenches and cable cutters. It’s pure genius! Even if they sold them at a loss, they’d still win. They’re building brand loyalty by marketing more than just tools—they’re marketing a lifestyle. Whether I’m right or not about all this, I’ll leave up to you to decide, but I’m willing to bet my spoke wrench that I am.

Yep—beer and bikes go together like a chain and sprocket. Even Park Tool knows it. I’m just not sure if this is something we should be proud of, laugh about, or cry over. Maybe it’s all three.

Your Turn: What brew do you prefer to crack open after a long, hard ride?

MarcS
MarcS is an author and Singletracks contributor.

Great post! Beer and bikes go together like two peas in a pod. My current favorite brew is Sierra Nevada’s Pale Ale, but I love experimenting and trying new beers! Recently checked out Oskar Blues’s Dale’s Pale Ale and that was delicious!

I don’t fully understand the connection, but mountain biking and beer drinking definitely have one. I believe a university should fund me for a statistically valid survey. We typically have one at the trailhead after a ride and the words you don’t want to hear are “I thought you were bringing the beer”.:)

Where do we sign up for this research project?

I eventually canceled my Dirt Rag subscription because I got tired of being told that as a mountain biker, I should like particular micro brews and hipster beers after my rides.

I honestly can’t count the number of people I’ve watched have 2 or more beers right before hopping in their car to go home after a ride. I find it incredibly sexy and undeniably cool.

This writeup originally ended with a reminder to all not to drink and drive. There was no way to keep it in, though, and still keep the article short enough to publish here. Besides that, I fugure we’re (mostly) all adults and ought to be responsible for our own actions without my including a public service message. PS–Don’t drink and drive!

This is why we normally drink our beer half-way through the MTB ride. That way by the time you’re back to the car, the buzz has worn off and you’re ok to drive. Plus, that makes the last half of the bike ride that much more fun! 🙂

True. It keeps pretty well in a stainless steel bottle if you don’t want to pack glass. Most folks around here (including myself) stop at the Local 180 Brew Pub for a burger and a pint of English style ale post-ride if we’re anywhere near the town of Oakridge.

Hmm 180 Brew Pub in Oakridge? I’ll have to remember that… gearing up for my Oregon trip in August!

That irks me too schwimm. Everyone will tell you not to drink and drive, but most people do it all the time, and not just MTBers after a ride. How often do people have a few drinks at dinner then load their family up in the van and drive home? Just because you’re not drunk doesn’t mean you’re not impaired, alcohol slows your reaction time, meaning you have less chance of avoiding a wreck if someone else does something stupid.

I’ll get off my soapbox now.

I always felt the mt bike crowd is vary similar to the skiing crowd. Beer is part of it for many.

mtbgreg1: You definitely ought to go to Oakridge for the MTBing–it’s world-class for sure. And you can’t go wrong with the food and brew at the Local 180. Have you checked out the trail listings for the Oakridge, Westfir & Lowell areas on singletracks? There are several of them with plenty of pictures.

Yeah I have definitely been doing my research. My two main destinations are going to be Oakridge and Bend areas… and conveniently enough they aren’t that far apart!

I usually wait until i get home for the after ride brew. I work for the phone company and any type of dui or would be the end of my job. Best not to risk it. However i do love a cold beer or 6 after my ride.

We have an outdoor enthusiast group here in Colorado, based out of the Springs, called UpaDowna. The basis for this group is to go up a mountain and down a beer. People sharing their love for the outdoors and good beer….and yeti stickers!

I just gotta have at least one of those park tools, haven’t decided if its BO-3 or 5. And if I get through a 6pack in a year, I think it was one big party 🙂

SHA-BOOM! Who cares? Down a good ale and enjoy the good times with friends that you ride trails with. Bikes and beer have a symbiotic relationship. The more I drink, the more I wanna huck off a 10 foot drop..resulting in a horrendous crash and necessitating the purchase of a shiny new steed or replacement of thrashed/busted components. It’s the circle of life. Pass another one, I’m gonna ride that black diamond on my beach cruiser.