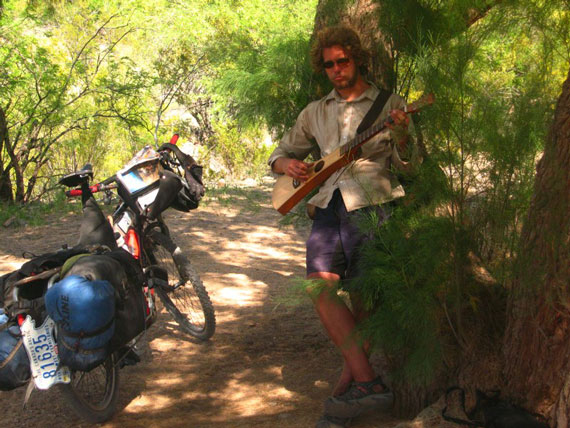 Incredible news: After three and a half years and 21,000 miles in the saddle, the Riding the Spine crew has made it to the southernmost city in South America. The guys started out in Alaska in 2006 to mountain bike the longest continuous mountain range in the world and on January 10, 2010 they completed their journey.

From what I read, the team faced some unusual obstacles along the way: wolves, gun-toting drug lords, active volcanoes, freezing temperatures, and of course, monkeys. The guys “wild camped” each night, cooked their own meals, and did their best to avoid paved roads in favor of dirt and singletrack.

You can read more on the Riding the Spine website where there are tons of pics and videos. TopoFusion is hosting a Google Map showing the route just in case anyone else is thinking of making the trip. Word is there will be a book about the journey sometime early next year and we can’t wait! Why aren’t these guys on TV and all over the news right now?

Community
A Chain of Inspiration has Grown Mountain Biking in the...
Gear
We Tested 5 Tubeless Tire Sealants to See Which Ones...
Gear
Enduro Deals & Early July 4th Sales
Gear
The We Are One Arrival Is a Mid-Travel Bike With...
Subscribe
Login
Please login to comment
3 Comments
Most Voted
Newest Oldest
Inline Feedbacks
View all comments

I just took a look at that route…Thats just insane..Somebody should endorse these guys

That’s insane (in a good way). I bet when they finished they looked at each other and said “So…what are we gonna do now?”

truly amazing. How would you ever go back to a job after doing something like that??!!