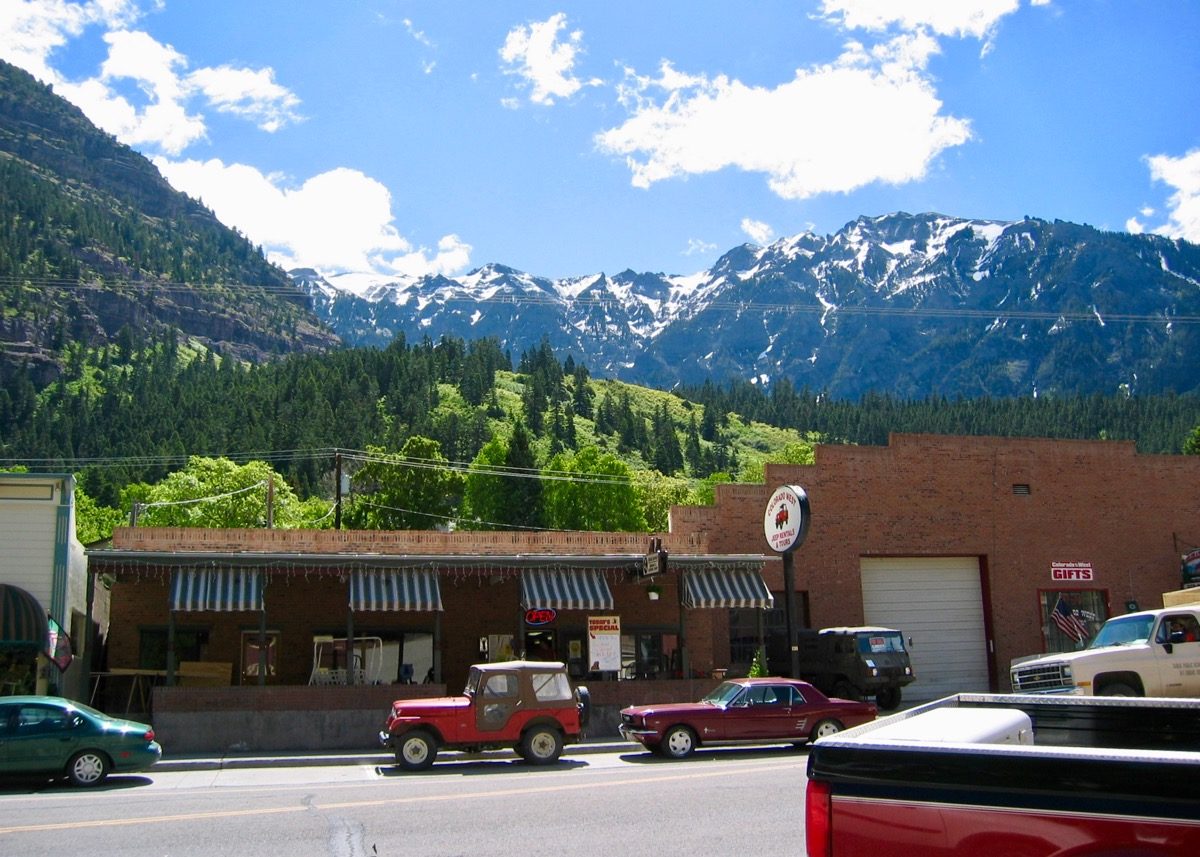 At the end of last year, I came across this article from ABC News Australia about some of the challenges the tiny rural town of Derby is facing in light of its newfound popularity among mountain bikers. Read the full article if you have the time, but here’s a recap.

The town of Derby is tiny. It’s an old mining town that at its peak had 3,000 residents, but in more recent times the population has dwindled to less than 200. The folks who live there mostly work in forestry and farming. Several years ago, the area received a big grant to build MTB trails, and they ended up creating some incredible trails. The Enduro World Series made a stop there in 2017, and it was voted the best course on the circuit. Tourism is booming, with 30,000 visitors to Derby in 2017 alone. New restaurants and bars are opening up, and there are new hotels, too.

As a result of this boom, real estate prices have almost doubled in recent years, potentially making it difficult for some longtime residents to stay as rents rise. (Some who owned property have already cashed out and moved on.) Now, some mountain bikers are beginning to oppose area logging operations that employ longtime residents because the mountain bikers are worried about how this might affect the trails and the scenery.

On the whole, it seems most Derby residents are benefiting from increases in tourism. But clearly, there are some–like loggers and other working-class residents who can no longer afford to live there–who are not benefitting equally from mountain bike tourism.

Much digital ink has been spilled on the great success that is mountain biking in Fruita, and it’s all true. What started out as the home of “Mike, the Headless Chicken,” is now one of the best-known mountain bike destinations in the USA, if not one of the best known in the world. Eighteen years ago, Troy Rarick, founder of Over the Edge Sports bike shop in Fruita and the Fruita Fat Tire festival, wrote this in the foreword to Bob D’Antonio’s Mountain Biking Grand Junction and Fruita Falcon Guide:

“(In 1995) Fruita was a pretty quiet, okay very quiet, town just west of Grand Junction, Colorado. Home to less than 4,000 people and, in that day, not even one coffee shop. Wow, how things have changed.”

Things in Fruita have changed indeed. The Fruita Fat Tire festival now attracts thousands of riders each spring, and the Colorado Plateau Mountain Bike Trail Association (COPMOBA) continues to etch more and more high-quality singletrack trails into the desert surrounding the town of Fruita. In 2017, the population in Fruita was estimated at nearly 13,000 people, more than triple the number Troy Rarick referenced in 2000.

In 2000, the same year Rarick wrote his foreword and just five years after that first Fruita Fat Tire Festival, the average home price in Fruita was $95,000. Today, according to Trulia, the average home price is $235,000, an increase of 147%. That’s more than triple the rate of inflation since 2000. Increased housing costs mean rising rents and property taxes, which can make it difficult for longtime residents to stay in a place like Fruita. Of course, that rise isn’t just due to an increase in tourism; clearly many factors are at play when it comes to real estate prices.

Representative Yeulin Willett represents Colorado District 54, which includes Fruita and Grand Junction. Not only that, he’s a dedicated mountain biker who rides 2-3 times a week. Willett has done a lot to promote tourism in the Grand Valley, but notes that he’s also “strongly cautioned that we need to not make [tourism] the top of the pyramid, but a strong adjunct to our economy.” He also notes that tourism certainly has some downsides, including overcrowding, low paying jobs, and “physical stress to our trails.”

In the Fruita guidebook foreword, Rarick notes that, “exploring and developing the cow trails north of Fruita began to yield more and more of the finest singletrack we had ever ridden.” Ranchers had been grazing cattle on the land north of Fruita for decades before the mountain bikers arrived, and many of them remain today. However, looking at US Census data, it’s clear that a significant number of ranchers and farm employees have moved on in the last decade and a half.

“Farming, fishing, and forestry occupations” accounted for 1.1% of the jobs in Fruita in 2000, representing 31 jobs. In 2016, that number dropped to zero, both in percentage terms and in absolute terms. Similarly, “construction, extraction, and maintenance occupations” accounted for nearly 12% of the jobs in Fruita in 2000; by 2016 just 5.6% of residents were employed in similar jobs. Not only did the percentage of workers in this category fall by half, but the overall number of workers employed in these fields fell, from 345 to 292.

On the flip side, Fruita saw a rise in service-related jobs from 2000 to 2016. Back in 2000, 222 people were employed in “arts, entertainment, recreation, accommodation and food services.” While the 2016 data uses slightly different categories, “food preparation and serving related occupations” alone accounted for 404 jobs in 2016. Add in entertainment, recreation, and accommodation positions and this is potentially a huge uptick. Unfortunately, these types of service industry jobs don’t usually pay as well as the construction, extraction, maintenance, and forestry jobs that may have been lost.

Mountain bikers give, but we also taketh

Another potential downside to mountain bike tourism is the added costs involved in providing community services to a transient population. Strains on everything from local emergency services to roads and parks carry a very real economic cost. If communities are able to plan for this, they can introduce hotel and restaurant taxes to cover costs, but this can take time. And, tax increases like this often have spillover effects on local business owners and consumers alike.

Have you seen any downsides to mountain bike tourism where you live? We’d love to have you join our conversation.

Interesting article with MTB specific impact. Thanks for the article.

If a ‘local’ was there first, they will have had the chance to do very well economically by doing next to nothing and riding the gravy train as their local economy grew.

If they chose a different path and are now priced out, the best attitude is probably to look back and be thankful to have lived so inexpensively for so long in such a desirable area. There are still plenty of amazingly sparse and cheap areas in this country that haven’t hit most people’s radar yet. Do your best to find the next one…and make different choices so you aren’t displaced again.

No one is guaranteed cheap rent in paradise their whole life. I’m sure we all wish that weren’t the case.

Good points. One missed though, is that frequently these rural, resource dependent areas are told that recreation will be their salvation. Instead, blue collar jobs are replaced with minimum wage tourism based jobs, while housing costs dramatically increase.

That top picture is Ouray which has zero mountain biking but 10 miles North is Ridgway with the RAT trails we started 11 years ago and finally got adopted by BLM only last year. It’s yet to be seen how MTBing will impact Ridgway but more MTBers are coming to town and spending money. Anyway…Fruita MTB tourism has a lot to do with location and weather and is very seasonal. I don’t think real estate has been impacted by mountain bike tourism but rather the rising cost of real estate in Colorado and more people from Denver moving west and making the Grand Junction area more appealing. There are also places like Oakridge that have incredible mountain biking but still are mostly meth lab towns. It’s interesting why Oakridge hasn’t taken off.

Good eye! That first photo was just used as a stock photo. 🙂 The article isn’t about any one place in particular, just about the impact tourism can potentially have on a place.

And yet Oakridge is frequently touted as a success story. Off the main street, it is like a ghost town of boarded up businesses and run down houses. It’s a great location, with lots of opportunity for outdoor recreation. The problem is that with the demise of logging and the mill*, jobs are few and far between, and even more rare if looking for greater than minimum wage. And Oakridge is just a little far to commute into Eugene, while also not being a mountain destination for the masses. BTW, poison oak in that area can be horrendous.

*Oakridge was particularly hard hit due to being almost completely surrounded by federal land, and having only one mill. My hometown, for instance, is surrounded by private, state, and federal lands, and have multiple mills. Consequently while impacted by fed land changes, state and private have been able to continue on. Just like investing, diversification helps.

Thanks for adding that @ACree. I had hoped to use Oakridge as an example but wasn’t able to get enough info in time.

I’m suprised that more towns that have adjacent public lands where trails could exist don’t promote mountain bike tourism. If your get 50 bike tourist spending $100 a day on lodging, dining, fuel, etc. during the 100 days of summer, that’s a $500,000 boost to the local economy. With volunteers, you can build trail networks almost for free. I’ve seen many small towns in Colorado with sluggish economies get with mountain bike tourism and now their economies are thriving. Small Colorado towns like Durango, Salida, Crested Butte, Winter Park and Fruita have all seen huge boosts to their economies due to bike tourism. Before mountain biking and with the uranium industry gone bust, Moab was little more than a truckstop. Now it’s filled with restaurants, hotels and bike shops. Many of the high paying extractive industry jobs of the past are gone and they’re probably not coming back. People from large cities are eager to get out of town and go ride. Makes sense to take advantage of that demand? Service economy jobs are better than no jobs at all!