Martin Maes has had another phenomenal start to the 2019 Enduro World Series racing season, winning six of the eight stages at the recent event in Madeira. During the opening EWS race this season, in Rotorua New Zealand, Maes suffered a nasty gash in his leg and received medical attention in the field.

Unfortunately, the medication that the emergency doctor administered will cost him the rest of his season, as its inclusion on the UCI banned substances list carries a 90-day suspension from competition. Maes applied for a Therapeutic Use Exemption (TUE), stating the medical necessity of his situation and the fact that the drug doesn’t offer any performance benefits, but his exemption was denied.

From GT Factory Racing: “The UCI complies with a set of strict rules and regulations, but also fully acknowledged the circumstances and that this was not a deliberate violation of any anti-doping rules. As a result, Martin will be prohibited from racing for a period of ninety days. He will be disqualified from rounds 1 and 2 of the EWS and will be required to pay a fine of 2,500CHF. However, his win and results from EWS Madeira will not be affected as he returned a negative test result after going through doping controls at this event.”

The folks at GT Factory Racing reported that “Martin Maes was notified by the Cycling Anti-doping Federation (CADF) of an Adverse Analytical Finding (AAF) for a prohibited substance. There was a high level of Probenecid in his test samples from EWS Round 1 in New Zealand and EWS Round 2 in Tasmania in March 2019. Probenecid is on the UCI’s List of Prohibited Substances and Methods. The Probenecid and a related antibiotic were prescribed by an official race doctor at the New Zealand Enduro to help treat a serious infection in Martin’s leg.”

The medical team didn’t consider that Probenecid would be on the UCI’s banned substances list, as it has no performance enhancing benefits to speak of. According to the official race director “Martin sustained a lower leg laceration which developed a serious infection while racing the New Zealand Enduro (March 8-10, 2019). The infection was worsening despite standard doses of antibiotics, and it had the potential to become life-threatening. The doctors at the New Zealand Enduro elected to add Probenecid, which is commonly used to boost blood levels of penicillin-type antibiotics, and it was effective in treating Martin’s infection. It is a common part of all of our practices to use this medicine in the setting of serious infection.“

GT Factory Racing said that Maes has their full support going forward, and they understand that neither he nor the team did anything to intentionally violate anti-doping regulations. 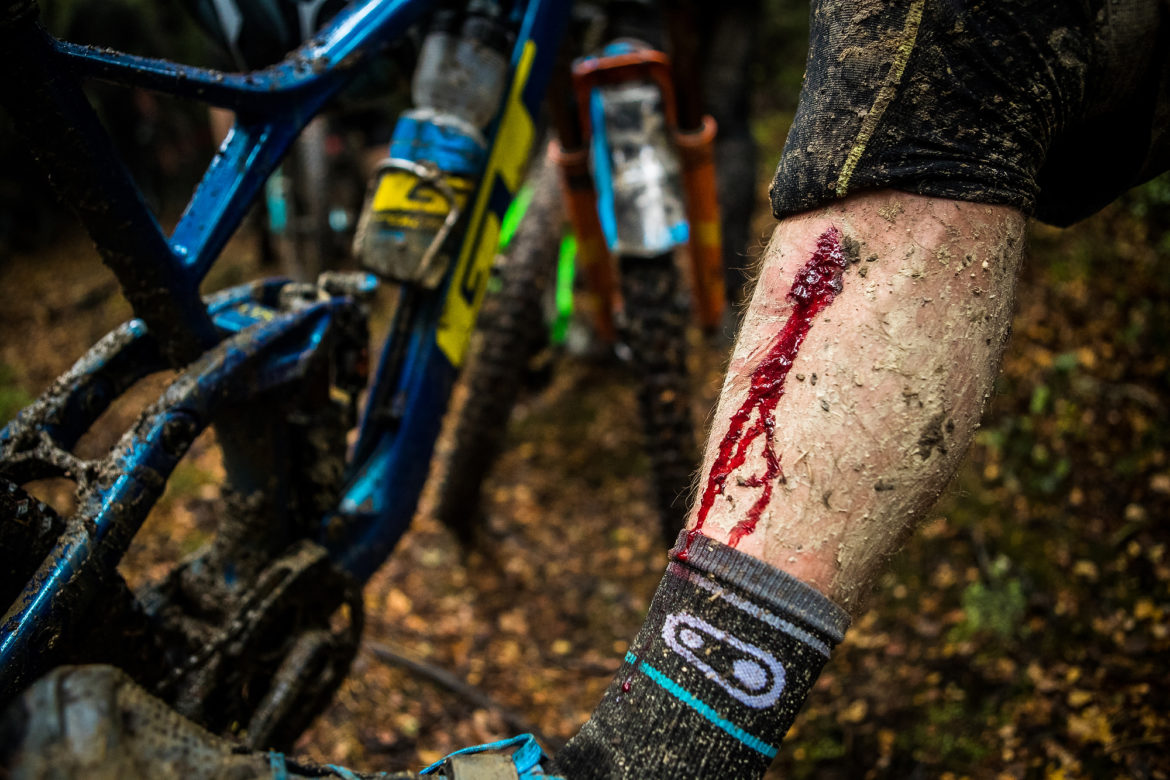 A note from the administering doctor

To Whom It May Concern:

I am a Specialist Emergency Physician, and have been practising Emergency Medicine for over 15 years. On March 8th -10th 2019, I was acting in a voluntary role as a event doctor on the New Zealand Enduro, a backcountry mountain bike race in Marlborough, New Zealand.

On the afternoon of March 8th 2019, I was reviewing and treating a number of riders who had been injured in the day’s racing. Mark Maurissen approached me, and asked me to review Martin Maes, who had sustained a significant laceration to his right pretibial area (lower leg) during the day’s racing. Martin had sustained an approximately 5 centimeter long vertically orientated burst type laceration to his lower leg. There was significant soft tissue damage, and the wound was grossly contaminated (conditions were particularly muddy that day) I irrigated and debrided the wound extensively, applied a topical antiseptic solution, and sutured the skin using 4 x interrupted sutures. I was concerned about a significant risk of infection given the wound location, tissue damage, and initial contamination. At that point I dispensed a course of flucloxacillin (an antibiotic) in a standard dose (500 milligrams 4 times a day for 3 days with a goal of preventing infection). I gave Martin standard wound care advice, and planned to follow him up in 2 days

On March 10th 2019 at around 10 am, I reviewed Martin’s wound. At that point, he had a clearly established serious infection surrounding the wound, despite the prophylactic antibiotics. This infection had developed over the last 24 hours. I removed 2 of the sutures, draining a small amount of pus, and irrigated and further debrided the wound. A higher dose of antibiotic was clearly indicated, as the infection was significant enough [to] be life or limb threatening if left unchecked. My standard practice in a case like this is to give a higher dose of flucloxacillin in combination with a medicine called probenecid. In this case, probenecid acts to reduce the excretion of penicillin type antibiotics from the kidneys, thus boosting the blood levels of antibiotic. These higher levels of antibiotic are particularly important for treating serious infection, and I do not believe Martin’s infection would have resolved without them. The only other option would have been hospitalization for intravenous antibiotics, which carries its own set of risks and costs, and would not necessarily be more effective than adding probenecid.

I provided Martin with a prescription for 2 grams of flucloxacillin 3 times a day for the next 2 days (dropping to 1 gram 3 times a day for a further 5 days), and probenecid 500 milligrams 3 times a day for 7 days. I discussed all of this with Dr Julian Balance, an Orthopaedic Surgeon also volunteering as a race doctor. He agreed with the management plan as above.

Both Martin and Mark asked if the medications were permissible for racing. I informed them that probenecid has no performance enhancing effects, and as far as I was aware was not a prohibited substance for racing. I checked this with Dr Balance, as well as Dr Sam Grummitt (another of the race doctors), neither of whom were aware that probenicid was a prohibited substance. There was no cellular data coverage at the event to enable us to check this. Martin began vomiting that afternoon, likely as a result of the higher doses of flucloxacillin, which often cause significant gastrointestinal upset. At that point we discussed referring him to hospital, and elected to give him a trial of an anti-vomiting drug prior to this. I dispensed 4 milligrans of ondansetron, which settled his vomiting, and enabled him to take the prescribed antibiotics.

I understand Martin made a good recovery, and was able to race 2 weeks later.

I also understand that Martin returned a positive urine drug test for probenecid at that event. I have subsequently learned that probenicid is on the UCI prohibited substances list, and has previously been used as a masking agent, although it has no performance enhancing effects.

The probenecid I prescribed Martin was clearly medically indicated and I would do so again given the same clinical scenario. I believe he would have experienced a significant impairment to health had I not prescribed it, with the potential for life threatening spread of infection. Had I known it was a prohibited substance, I would have been happy to fill in a therapeutic exemption form. I am confident that there was no performance enhancing benefit from the prescription, and in fact, the severity of the infection was likely to have been detrimental to his performance in the next few weeks

Please let me know if I can be of further assistance

We will follow up with more news on Maes’ case as we receive it.

The fine seems a bit over the top . Of an already stiff penalty.

I agree, especially having the administering medical professional willing and able to express the need for the Probenecid.

Wow, crazy over the top reaction. Making a ruling like this is NOT good for the sport. Now riders will seriously consider refusing potentially life/limb saving treatment to avoid nonsensical bans.