Time is the greatest limiting factor in all of life. It is the ultimate non-renewable resource. As each moment greets us, it is instantaneously gone forever.

Are you sure you want to spend your precious time reading this?

But the number of meaningless things that we spend our time on is mind-boggling, so spending less than 5 minutes to read this article is nothing.

What am I doing with my life?

The average time required to commute to work in the United States is 26.1 minutes, according to new data from the U.S. Census Bureau reported in the Wall Street Journal. That equates to 52.2 minutes per day, 4.35 hours per week, and 226.2 hours per 52-week year. Put another way, Americans spend 5.7 work weeks just getting to their job.

While some politicians assert that Americans need to work harder to increase their income, according to CNN Money the average American that’s employed full-time reports working 47 hours per week. Not only that, “nearly four in 10 workers report logging 50+ hours [per week] on the job,” according to CNN.

Including commuting time and work time, we’ve arrived at roughly 51 hours per week invested in work, on average. Now, consider all of the other daily tasks that are required just to stay alive: food (purchasing, preparing, and consuming), sleep (that’s a big one), hygiene, bodily functions, and more.

While numbers vary pretty widely, some studies show the average American spends 37 minutes per day preparing food and 67 minutes per day eating food and drinking beverages (Source). According to the Washington Post, we spend roughly 40 minutes per day on hygiene. Food preparation, consumption, and hygiene activities collectively account for 16.8 hours per week.

There are 168 hours in every week, and we’ve just determined that 124 of them are burned up doing the things we have to do. That drops our total amount of time available down to about 44 hours. 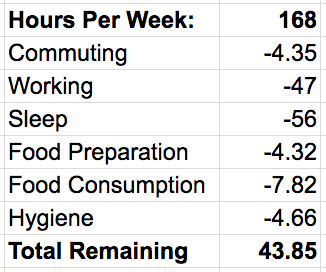 So where does mountain biking fit into this picture?

Time–or rather, a lack of it–is often used as the biggest excuse for not mountain biking more. “Oh, I would love to bike more, but I just don’t have time for it,” we hear. Sometimes, those of us who prioritize our biking over other activities are even made to feel guilty–or lucky, or an outlier–for doing just that. But is this truly the case?

Since work, food, sleep, and hygiene account for our most basic of needs in order to survive, we have 43.85 hours per week to work with–or rather, play with. While on the outset this sounds depressing–51.35 hours have been dedicated to our occupations, after all–if we take these 43.85 hours and use them wisely, we can accomplish a great deal–a great deal of mountain biking, that is.

So how fast is the average mountain biker? According to a report on Singletracks way back in 2007, the average Singletracks member rides trails at just under 7 miles per hour. If you could someway maximize all 43.85 hours of your free time and channel it into riding, you could cover some 307 miles of singletrack trails every single week. That would be an astonishing 15,961.4 miles of singletrack per year–an absolutely massive amount by any standard.

And, if you’re riding that frequently, presumably, your speed would increase too. Could you eventually achieve a 10mph average? Faster? If you could average 10mph for 43.85 hours per week, suddenly we’re talking about 22,802 miles of singletrack per year.

Alright, we’re getting a little number-crazed now, aren’t we? Real life doesn’t work like that, does it?

None of us ride 22,802 miles per year, so where does all of our free time go? Well, we waste a large percentage of it.

The New York Times reports that the average American watches 5 hours and 4 minutes of television per day. That’s 35.47 hours of TV per week, or more than 1,844 hours per year. (Note: there’s some disagreement on these statistics, with the Washington Post reporting 20 hours per week spent watching TV. However, the Post article is a few years older and cites a different survey.)

If you’re an average American, based on these statistics, watching TV takes up nearly 81% of your 43.85 hours of free time per week, leaving just over 8 hours open for the week.

We haven’t even gotten to social time, time with family, time with pets, time reading books, time spent mindlessly browsing social media, time focused on spiritual pursuits, time spent fixing the house or mowing the lawn… any of the hundreds of other ways that you could spend your time, wasteful or not.

The point is this: we get to choose. Even when we don’t think we have a choice–for instance, the 4.35 hours per week spent commuting–we do have a choice. We can switch jobs. We can move closer to our job. We can always make a change.

But when we focus our gaze on time wasters, realizing that the average American spends somewhere between 20 and 35 hours per week (or even more) watching TV, the choice becomes that much clearer.

Time is ticking away.

Besides time with my wife and family (very little of that is watching TV or movies), I spend most of my free time either riding my bike or researching new trails to ride, or documenting the trails I have ridden. The last two take quite a bit of time.

Heh, I get amused when I spend more time deliberating about my ride–where I’m going to ride, what route I’m going to take–than I do on the actual ride. So now I try to cut down my planning time, and just start pedaling & figure it out.

The anticipation of a trip is a big part of the “value” we analyze in recreation management. In other words it is a very real part of our experience as users as we recreate. For me in Mongolia I have to spend the hours perusing and interpreting sat images on Google Earth just to find potential trails and to have a precursory knowledge of what is out there and options I may have when I am out there. So it takes time, but I love it. And the sat images are the only “data” available.

I’ve heard a lot of people talk about how important anticipation is, but I guess I’m personally questioning that so-called value. If we’re always looking forward to the next adventure, can we truly enjoy what’s going on in our lives right now?

I know that lots of times I personally live that way, anticipating the next adventure. And right now, I don’t really have any adventures planned due to injury recovery. Consequently, I feel sort of lost, as I don’t have a goal or a new trip that I’m looking forward to. The easiest solution would be to put a trip on the calendar. The more complex solution would be to ask myself, “why do I feel this way? Can I be content and fulfilled even if I don’t have any trips or adventures planned in the future?”

Haven’t fully sorted that one out yet.

Also, don’t forget about the time required to commute to and from the trail. Some people have substantial time invested in getting to trails. But in places like CO that’s not all bad.

People say “time is money.” But I think the saying “money is time” is more correct. I always try to remember that when I work, I am trading the real currency of life, time, to get the money I need to live. Nobody is lying on their deathbed regretting they didn’t worked more. Work less – ride more!

I’ve finally purchased a good light to enable night riding – my tv watching time is about to get drastically cut in favor of my bike riding time! The only problem is TV time also corresponds to wife time (we love laughing at our shows together). With all of these decisions of how to use your time, there is a trade-off. I figure I won’t be night riding every night. Rather I’ll trade a night of watching tv with my wife here and there for a ride instead.

I used some of your times to average and added my two hours a day of commuting and man a week goes by quickly. I try and run or bike during my lunch to get a little more time in. I have pretty much given up TV, I have become a poor fan of my sports teams. I am lucky enough to have a wife who loves to bike (rode and gravel, no single track) and when we plan vacations biking is always part of it. In April it is Tennessee and Arkansas because Wisconsin is mucky then. The key is maximizing your available time. Putting the important things first.

Way to go Bobzer on dropping TV. I keep up on my favorite sports teams by looking at boxscores and a few highlights. Minimal concentrated quality time. I was blessed to have a dad that did not let us watch much TV when we were kids (back in the 60s and 70s). He said two TV programs a weeks, and the five of us kids had to agree among us which two programs we would watch. CRAZY, but effective. The TV was only on in the house two hours a week. So we used our free time reading, doing school work, taking care of animals (dogs and horses), playing in the woods (thousands of acres of hardwood forest), playing sports and working. My dad was far from perfect, but he had the TV thing figured out.

Wow, the TV watch time just makes me sad. What a waste of a life for folks.