One of the reasons we decided to travel to Portland this summer was because the city is billed as one of the most bike-friendly places in the country. Among cities large enough to support an NBA team, Portland is easily #1 when it comes to big city biking. Here are eight observations we made during our week-long trip.

1. You can ride your bike to the airport. Not only are there safe bike paths and bike lanes leading all to way to the terminal, there’s even a “bike assembly” area within the terminal itself. No need for a rental car when you fly to Portland – just bring your bike on the plane! (though I don’t recommend carrying a lot of luggage)

2. Bike infrastructure is important. Aside from the obvious stuff like bike lanes and sidewalk racks, Portland has special bike traffic signals, dozens of “bubbler” drinking fountains, signage, and even a dedicated drawbridge path that raises and lowers for river traffic. 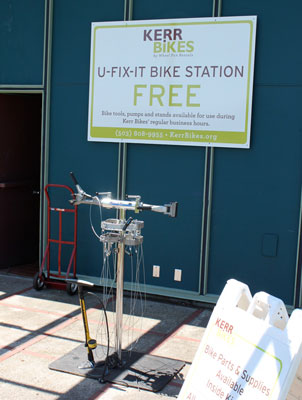 3. You’re never far from a bike shop. Clearly a lot of bikes and bike parts are sold in Portland but it isn’t like there’s a big bike superstore where everyone gets their stuff. Instead, neighborhood bike shops are practically on every corner which supports commuters who need to pick up a tube or borrow a tool. We even saw this well-stocked (and free) bike repair stand near the city center. 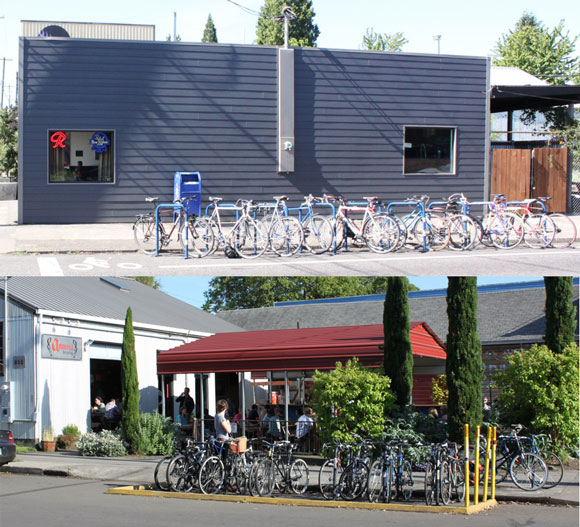 4. Bike parking can come at a premium. At night the bike racks outside popular bars were completely filled with dozens of bikes – so much so that people would be circling around, looking for a place to lock their ride. As a cyclist it felt good to see people biking to do errands, to hang out with friends, and to get to work in addition to pure recreation.

5. We saw zero bike-on-car conflicts. I was a little nervous about driving a rental car around Portland at first because of all the cyclists on the road – frankly we (cyclists) can be hard to see sometimes. In fact it took no time at all to get used to checking the curb lane when making right turns and allowing groups of riders to clear intersections before proceeding. Back home I found myself looking for cyclists when driving familiar roads, even though I rarely (if ever) see bikers on certain stretches. Just goes to show that drivers CAN learn to deal with cyclists but it’s a lot easier when there are more opportunities for interaction.

Along the same lines, most of the bikers we saw obeyed the traffic laws to a tee. By obeying the rules, cyclists become more predictable on the road which helps drivers make better decisions. 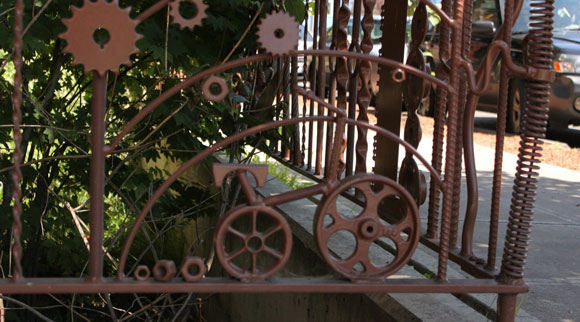 6. Bike art is everywhere. There’s a reason people talk about a “bike culture” in Portland rather than just saying a lot of people ride bikes there.

7. Mountain biking in Portland is a bit of an afterthought. Sadly for all the bikes in Portland, very few of them are ridden off road. We did manage to find a MTB-specific bike shop (Fat Tire Farm) which had a great selection of bikes and parts plus rentals but other than that, most shops are focused on the larger commuter / road markets. 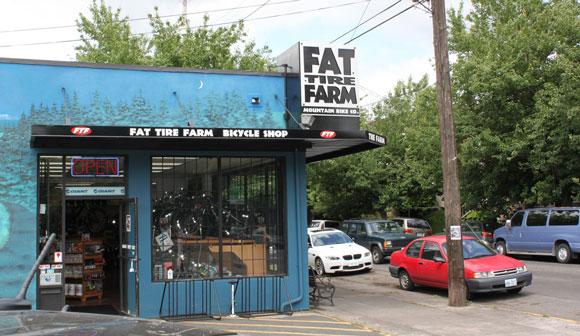 Unfortunately the city parks aren’t really friendly toward mountain bikes either. Forest Park, the largest forested city park in the US, prohibits bikes on the dozens of miles of singletrack trails through the woods. Instead, bikes are relegated to smooth, wide Leif Erikson drive (though at least it’s dirt!). Mountain bikers in town have been known to poach the trails around the Oregon Zoo area but the threat of stiff fines keeps this activity strictly on the DL.

8. The term “biker bar” has a totally different meaning in Portland. Enough said.

The Portland bike culture is unique among US cities and to me it’s a great model for how bikes and cars can coexist in a big city. Now if the city could just get behind mountain biking off road as much as they support biking on the road this could be my nirvana.

Gear
13 Reliable, High-Quality Mountain Bike Products Designed to Last
Progression
Mountain Biker's Guide to Paleo: Reviewing the Whole Foods Diet...
Gear
Why are Good Rain Jackets so Expensive? We had to...
Progression
How to Stay Strong in the Off-Season, Even if You're...
Subscribe
Login
Please login to comment
7 Comments
Most Voted
Newest Oldest
Inline Feedbacks
View all comments
49637

Man, I was ready to pack my bags and move to Portland until I hit #7. Bummer!

Still pretty cool to see cycling deeply embedded in the culture though. With bikes being such a prominent mode of transportation did you notice less traffic than other major US cities? Cleaner air?

Oops, I wasn’t signed in!

Yeah but the main thing here is most of us have to drive to the cool ass single tracks and suffer the inner city or non biking communities.. Oregon is a gorgeous state that has TONS of mtns to explore and 1000’s of feet of elevation to climb and descend. don’t let 7 dishearten you! 🙂

Great article! I wish it were like that here. I could see sooooooo many issues soved if people rode to work instead of drove. It’s hard to eat a big mac and fries with a large coke while riding your bike 🙂 I’d like to see one of these on a mountian bike heavy town… if there is such a place. Somewhere in Colorado perhaps? Utah?

I remember going to Powell Butte Park and having lost of fun. It’s small network of singletrack with a fair amount of climbing. Is that still open to mountain bikers?

Not only does the bike shop in #3 (Kerr Bikes) provide free tools at the ‘u-fix it’ stand, it is also a local nonprofit that supports youth and families with mental health challenges, and children and adults with developmental disabilities.

Its great that a bike culture has developed there. I just returned from Europe and noticed how over there the infrastructure is also in place. Every road of any size had a parallel paved greenway. Everyone there rides and obesity is almost non-existent. High gas prices and population density are the drivers there. Portland shows that it can be done here if there is enough political push to spend the money required.