A web of natural singletrack lines the inside of Slovenia’s chicken-shaped border, covering the country’s pristine forests in fun. Like much of Europe, former military and farming paths ribbon around on the forest floor, leaving behind the story of what was while laying the groundwork for something new.

I recently had the good fortune to tour a smattering of Slovenia’s prized trail centers with Trans Julius Enduro promoter, Vesna Stanic, as my native guide, and I was nothing short of dazzled by the quality and quantity of riding throughout the country. There are three trail centers in the capital city of Ljubljana (pronounced Lubiana in English), and from there, visitors can further explore the hillside wonders that Slovenian shredders are working hard to create all around the country.

Slovenian land is more than 50% forest canopy, and nearly every treescape has its own trail system. If you don’t yet have plans to visit Slovenia, you can “Naj te koklja brcne!,” or “Let the chicken kick you” into motivation mode. For natural singletrack lovers, this place is magical. 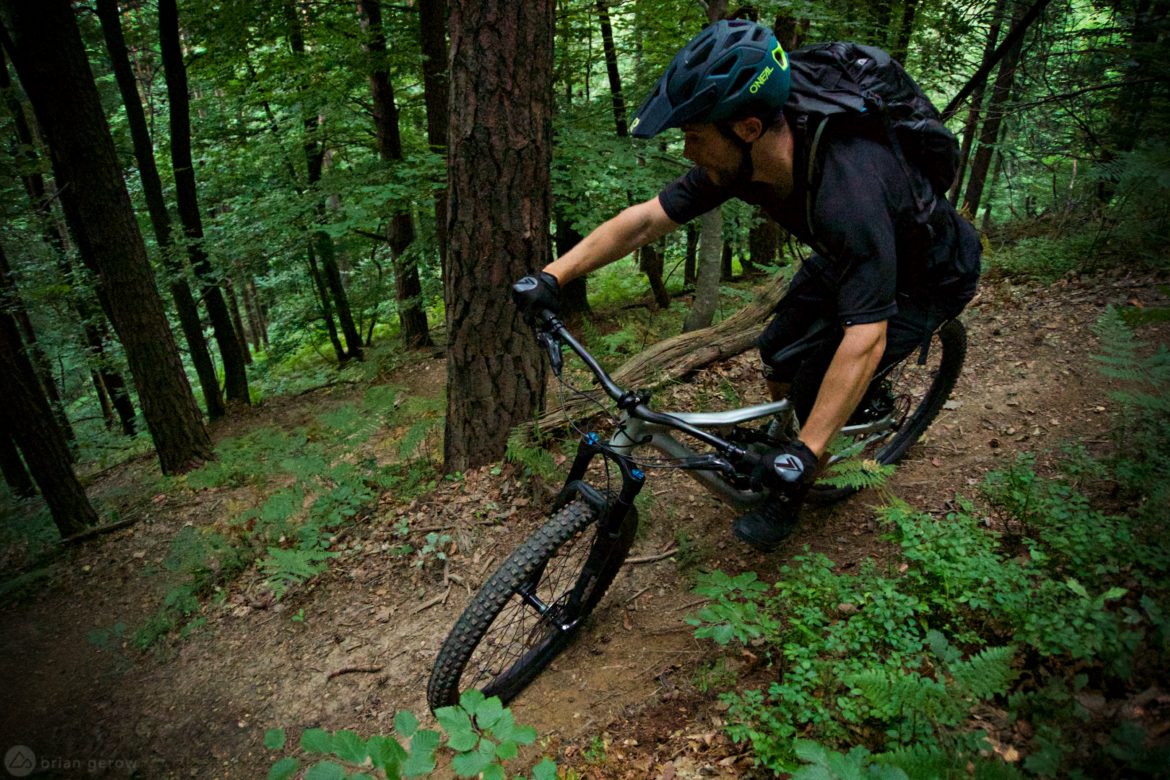 Golovec Trails fill the forest just a brief 10-minute pedal from Ljubljana’s city center, and the locals love this system. There are roughly 10 different trails in the network so far, and many more in the works. Similar to networks around the globe, Golovec started as a handful of hand-dug tracks 15 years ago and is slowly being adopted by the city. Signage and maps are currently being created, and riding with a guide for your first tour is the best way to link up all of the best routes. 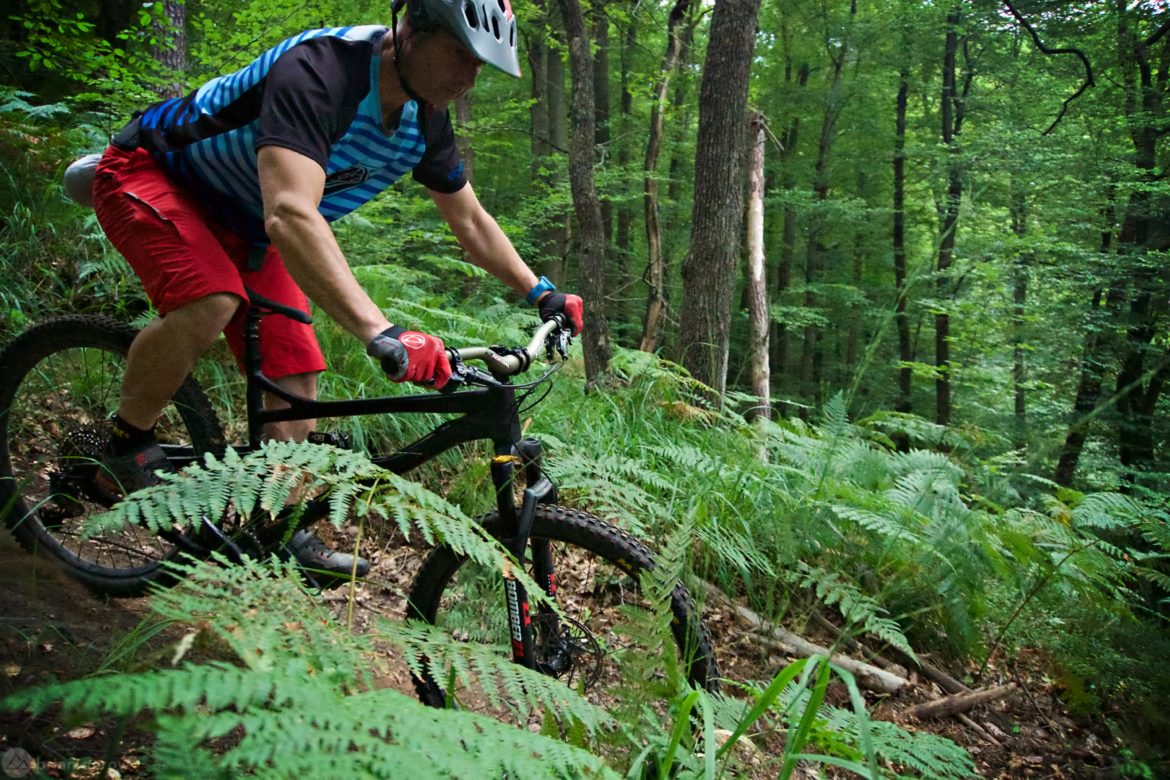 The system consists of a series of natural tracks, replete with Slovenia’s signature above-ground root mattes, interlaced with a few bermed flow trails. All but the one massive jump line were built by hand, with an old school twisty and fun ride quality throughout. 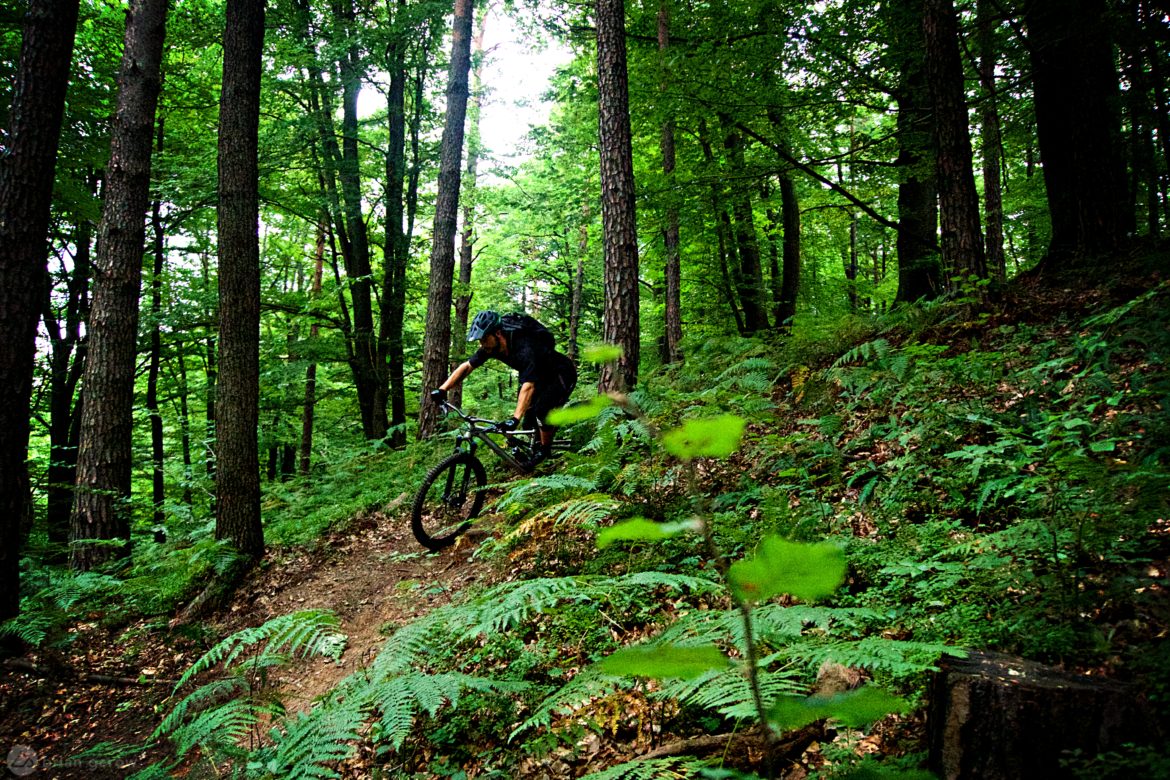 My guides, Tadej and Matej run a tour and MTB school service for the singletrack trails in an around the capital, and riders can sign up for a free guided ride and bike rental here. If you’re on the hunt for lift-assisted park runs, check out Bike Park Ljubljana, and for guide services further out of the city, Outdoor Mania has a solid selection on offer.

If you want to dip your tires into some racing action, the SloEnduro Series includes five, high-level events and a separate “for fun” series with an additional nine races to choose from. Race promoter, Matej Okorn, designed the series to give contestants a taste of racing while making sure to include events that suit everyone’s riding ability and desired risk level. Slovenia’s EWS racers regularly compete in the elite SloEnduro events, while the “for fun” series opens things up for first-time contenders.

Every mountain bike wonderland has its version of Whistler; a network that all visitors simply have to ride. In Slovenia, that place is up near the Austrian border, in the Koroška region. The Jamnica trail center is largely orchestrated by the Štrucl family, who run a bed and breakfast from the center of a massive trail-web that they have built over the years. The family also curates the Black Hole trail and associated museum at a defunct lead and zinc mine near their home.

In 2018 Anej Štrucl convinced Enduro World Series director Chris Ball to hold an EWS race in the area, with stages split between the Jamnica network and the Petzen Bike Park that lines the ski slopes about 15k away, in southern Austrian. The race will return to Jamnica in 2020, and the dig crew is steadily scouting new tracks for the event.

Apart from a few of the flow tracks on the Petzen side of the border, the trails in this region are carpeted with beech and oak roots, often off-camber, and fall in the blue to double-black difficulty range. All of the trails in the Jamnica network are hand-built, and clearly designed to challenge riders with a uniquely engaging style of building. There are a number of trails and forest roads to relax on between shreds, including some that Anej’s kids ride, and one snaky switchback track that returns to the top of the network.

Stay tuned for a forthcoming article that will dig into the substrate of what’s going on in the Koroška region, and the impassioned people who make it all happen.

The Slovenian-Austrian border is dotted with fantastic places to ride, and Trži? is one location that’s on its way to greatness. The hand-built trails are largely accessible via fire roads and maintain a truly classic ride feel throughout. They are very narrow, the soil is loose and forgiving, and, like most of Slovenia’s singletrack, the trails cradle your tires in tree roots. 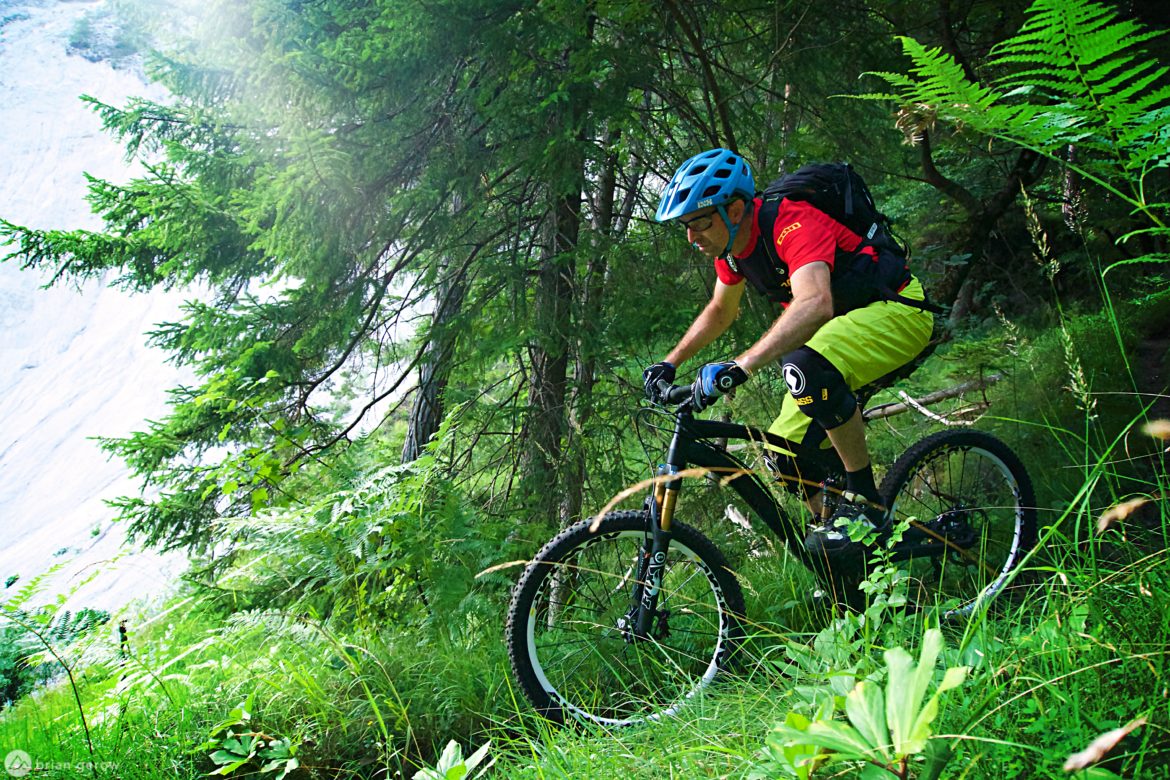 Riders in the area are working hard to gain authorization for their trail system, and have made some progress with the municipality. Finding the trails in Trži? can be tricky, so stop in the local bike shop and ask for directions. There is a good chance the mechanic has a friend who can show you around. 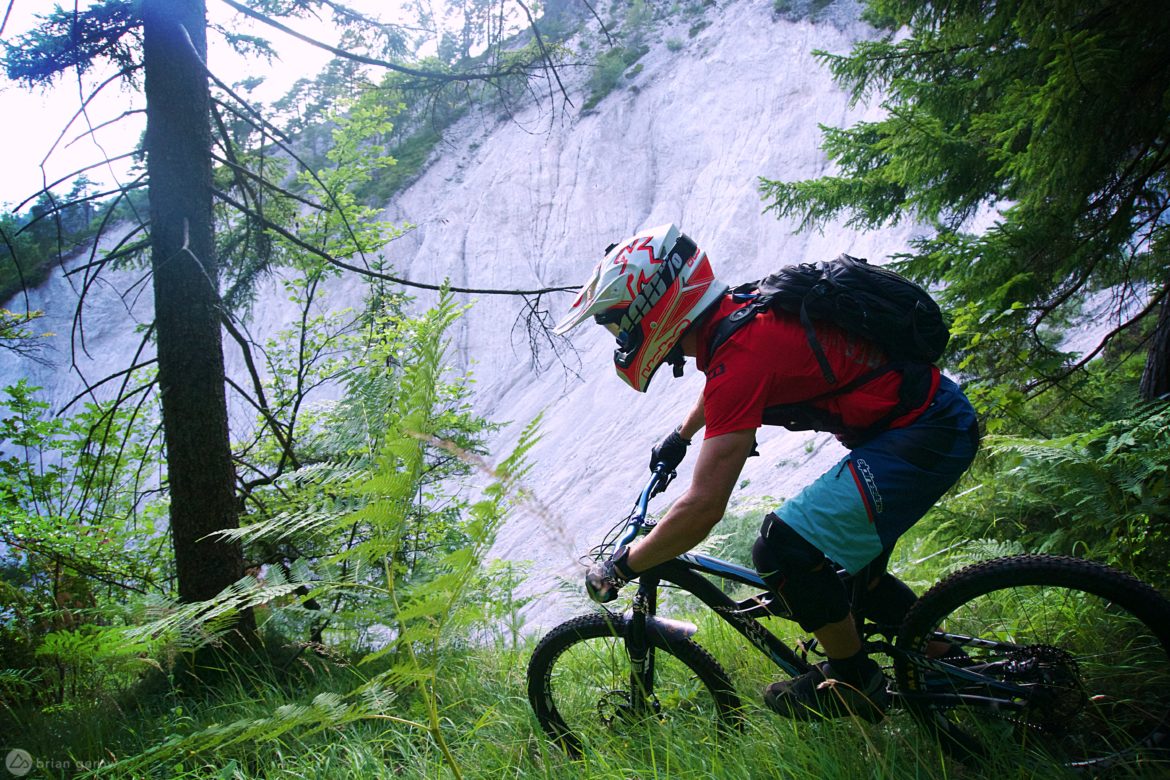 The bright green forest understory in northern Slovenia reminds me a lot of riding in the Pacific Northwest of the U.S., but this dusty white stone beneath it all was something new entirely.

Look for the trails in Trži? to gain popularity as the city continues to see the value of mountain bike tourism. For dirt-rider-friendly accommodation in the area, hit up Base Camp B&B. Their breakfast is more than enough grub to fuel a long day. 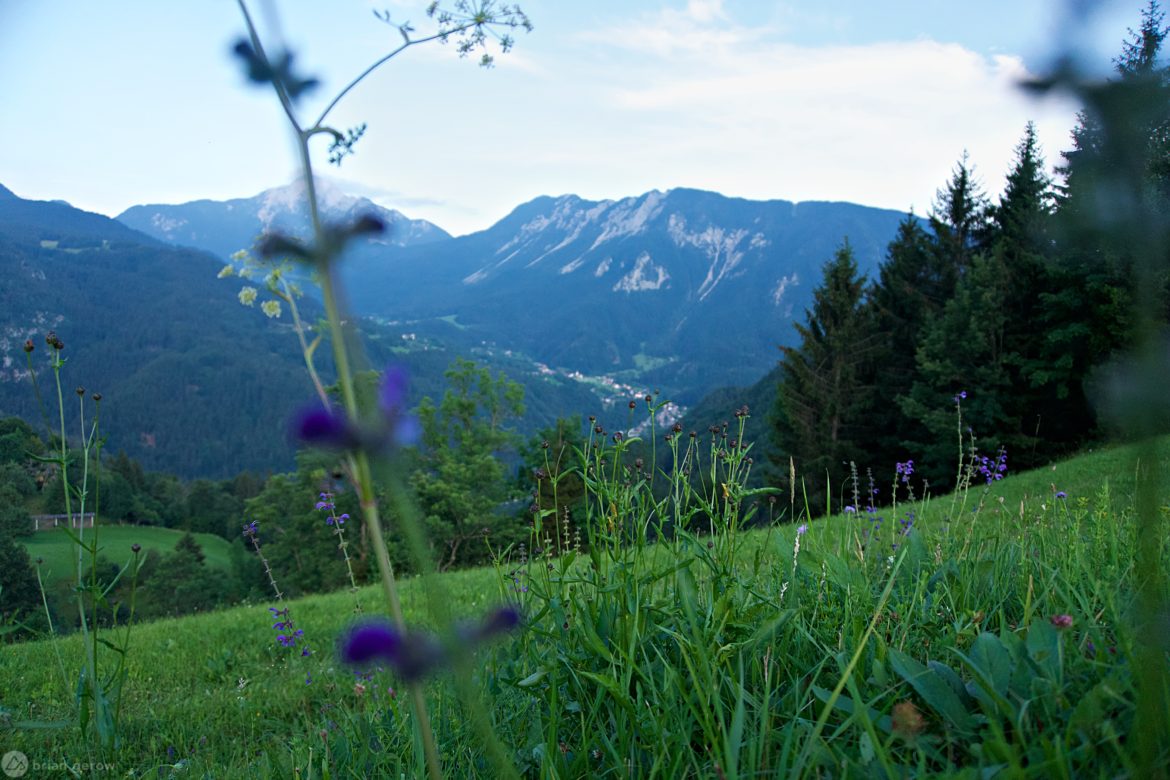 On the north-western end of the Slovanian chicken, near the Italian border, the Julian Alps push the trails upward with slightly rockier footing than much of the country. The city of Bohinj, siting tightly walled by mountains in the valley below, plays host to the annual Trans Julius multi-day enduro race.

In June, the race traversed trails above and around the town and finished in Bohinj proper. The event kicked off with two runs in Cerkno Bike Park, one during the day and a second go on the same trail in the dark, then through the So?a Valley on day two, finishing above Bohinj for the final two days of gravity racing. Vesna has intentionally designed the event with a keen eye on fun, shredding 1-2 stages per day, and leaving plenty of time for socializing and swimming.

The race prologue took place in Cerkno Bike Park, on a natural track that starts from the base of the park and ends in the town below. The trail consists of steeper sections, a ripping fast meadow traverse, and ample off-camber rooty turns to keep everyone on their toes. All of the Trans Julius stages are raced on-sight, meaning that most riders have not yet seen what lies ahead of them.

Cerkno Bike Park consists of several flow lines up top that all split and interweave with more natural trails, and a family-friendly line below. For more info on the tracks in and around Cerkno Bike park, contact the builders directly through the park website. The main trail crew is made up of two professional guides, Tadej Razpet and Martin Rupnik. This hard-working pair has built, advocated for, and orchestrated everything that Cerkno has to offer mountain bikers today, and Tadej is one of the fastest enduro racers in the country to boot.

In addition to their work in the park, Tadej and Martin run guided rides throughout the region, including an impressive network of trails near Tadej’s home. Hit them up for a good time on the trails, via the park webpage.

For a quiet place to sleep in town, the Hotel Cerkno is hard to beat, and the nearby Smuk restaurant serves up the traditional flavors of the region.

Several of the trails in the Trans Julius were built specifically for the race, including Double Black, which Vesna and her crew shaped over several hard weeks of nonstop digging. The track is a series of tight switchbacks across a steep slope, in loose and soft soil. If you misjudge a nose-pivot, the hillside makes a nice landing pad.

I’ve long wanted to visit Slovenia, even before knowing there was great riding there. This just amps up the stoke!