The area surrounding Western Carolina University (WCU)–and Jackson County, North Carolina as a whole–is just one steep ridgeline after another, encircled by 5,000’ and 6,000’ peaks towering above the Nantahala National Forest. Since this part of the world is a temperate rainforest, there are deep woods and lush, green, rhododendron tunnels around almost every bend. It’s easy to get lost in Mother Nature’s embrace, just a mile from a college campus bustling with 11,000 students.

The trails at WCU were built in 2013 after a diligent drive by Josh Whitmore of Basecamp Cullowhee. Josh procured funding, convinced the school leadership that mountain bike trails were a good idea, and ultimately ensured the trails were built. Nearly $100,000 in grants and over 1,500 hours of volunteer labor transformed a steep and unbuildable parcel of university land into a respectable set of trails that literally begin at the edge of campus. These trails bolster WCU’s reputation as one of the top-rated outdoor schools in the country.

The campus trailhead is just around the corner from the school’s main entrance, past the solar-powered hammock hangout and before the softball field. The 10-mile trail system features great signage and there’s even a permanent work stand/tool caddy/air pump station that’s saved me some aggravation more than once.

The trail starts through a tunnel under the highway, leading onto the adjacent campus of the NC Center for the Advancement of Teaching. The singletrack (and the climbing) picks up immediately on the left.

The WCU trails are sort of the big sister to the new Fire Mountain trails in nearby Cherokee, NC. They were both lovingly crafted by the good folks at Trail Dynamics, the masterminds who carved the epic Ridgeline Trail over in DuPont State Forest. Riders will feel a lot of similarities in the trails, in the beauty of the bermed curves and the excellent use of terrain, that together create a flow that approaches the sublime.

In most places the WCU trails are smooth and hard-packed, with good traction and great drainage, though there are a few surprise rocks and gullies that’ll get riders’ attention. The initial climb from the trailhead dishes out 12 switchbacks full of pain, with a 5-pack at the very beginning that is incredibly humbling.

The downhill runs dodge deftly through the trees to riders’ great, swoopy delight, but they get tricky when speeds start approaching ludicrous levels. And the waterbars… oh, the waterbars are wonderful and smooth, with cool curvy jump lines in and out, and they are simply everywhere! Seriously, just the run back down the yellow trail will net at least 50 chances to rise above the earth, and there’s at least that many waterbars waiting along the other trails as well. 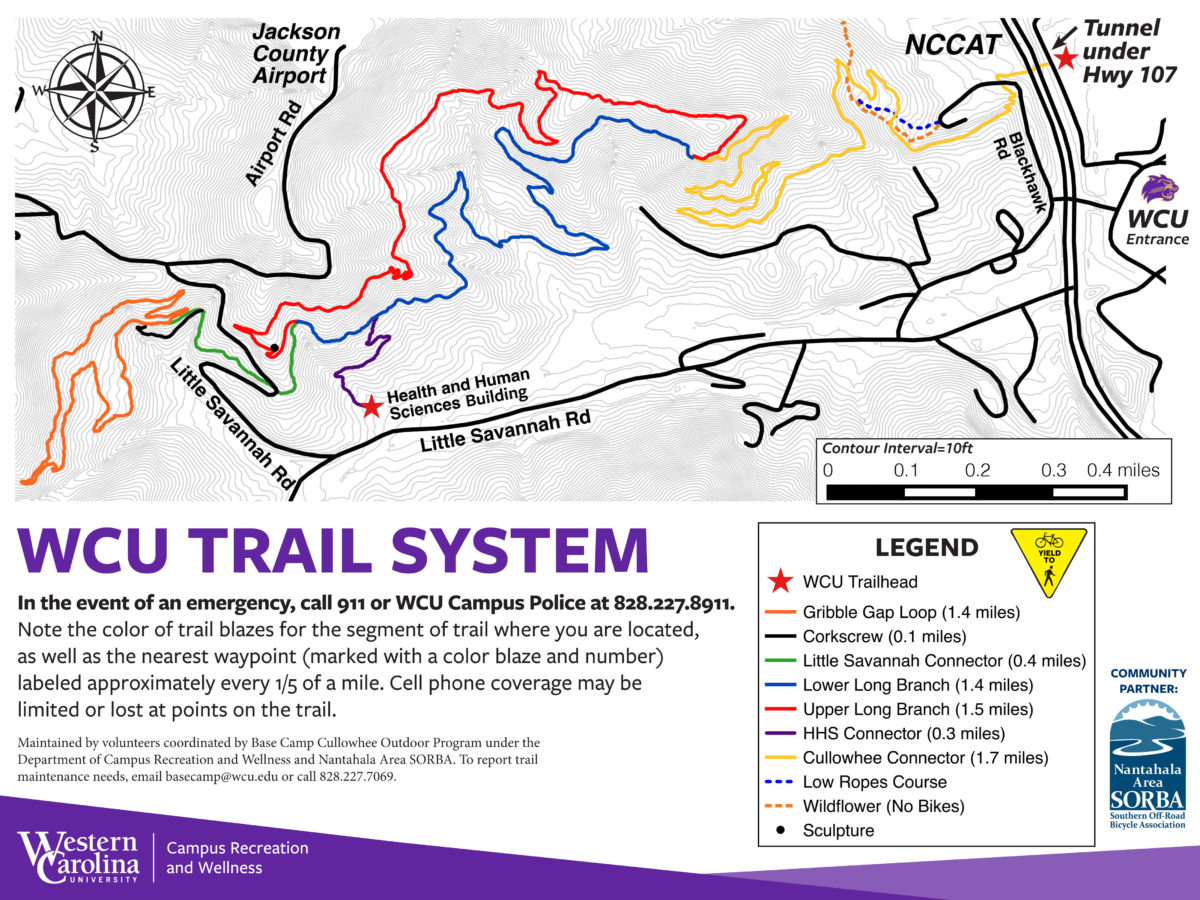 From the bottom, the trail system looks like a big lariat, with a smaller lariat on top. I generally start at the bottom, tackle the big climb up the yellow Cullowhee Connector trail first, run the top loops, and finish with a near 2-mile long, jammin’ downhill back to the trailhead. Though to be fair, that climb up the yellow trail just sucks, every single time, every single day. That’s probably why some folks prefer to ride the Long Branch and Gribble Gap trails as a figure-8, parking up top where the connector trail crosses Little Savannah Road, near the Cullowhee airport. However you run it, WCU offers up a sweet serving of singletrack pie.

Do you have that favorite local trail that you always fall back on, that go-to bit of dirt that calls to you: “You don’t need to work right now. And the grass looks fine. You can spare a few hours. Come ride instead!” For me, that siren’s call leads to the trails at Western Carolina University.

Sometimes, a trail is more than just a trail. Sometimes, a trail is your comfort, your sanctuary. Sometimes it’s your counselor or confidant. Sometimes it’s there to teach you a lesson, and sometimes it’s there to remind you how to play. There’ve been days this trail humbled me, but many more days where it made me feel like Superman. It’s granted me both solace and perspective when I needed them most. This trail forced me to confront and overcome a long-creeping fear of jumping and (poorly) landing my bike, earned from a lifetime of hard crashes. And it gave me back that feeling of child-like joy I get when my bike sails through the air.

This trail has been many things for me. My son and I helped clear sections of it when he was just a wee lad, and now he chases me down it on a bike larger than mine. I’ve taken old riding buddies out to these trails, and shown the trails off like a proud papa. These trails have tested me, and strengthened me, and shown me time and again how good it is to be alive. Yes, sometimes a trail is more than a trail–much more. Sometimes, it’s a Gift.

If you like riding with a good mix of respectable climbs, meandering singletrack, raging descents, and dozens of waterbars to leap from atop, and don’t want to spend all day in the woods, then the trails at WCU are definitely worth your attention. The WCU trails are located about an hour west of Asheville–just follow the signs on I-40 and US 74 for Western Carolina University.