Open a map of Virginia’s Blue Ridge Mountains and you will find a spectacular array of trails and dirt roads that lead from one end of the state to the other. This stunning ridge line is one of the defining features of the Old Dominion. Its blue and purple sunsets, cascading mountain streams, and stunning vistas cultivate this incredible landscape. I have spent my entire life living and playing here, paddling rivers and creeks along its valleys, and spending nights camping in the backcountry by its peaks. Here in the Blue Ridge, I feel at home.

Unlike the Alleghenies to the west, the central and northern Blue Ridge Mountains are protected by several Wilderness Areas, as well as the Shenandoah National Park. This means there is not a lot of permitted riding. However, if you do spend enough time looking at a map, you will find a few trails tucked into the landscape. One example is the Whetstone Ridge Trail, trail #523. This sharp, thin ridge drops off the back side of the Priest Wilderness and is one of the most demanding/stunning trails in the area.

We chose to park at the bottom of the ridge and make the 10-mile climb to the trailhead, figuring it would be much more enjoyable at the beginning of the ride as opposed to several hours later when we were tired. The gravel road up wound along Irish Creek, a small stream trickling through George Washington National Forest. The gradual climb was a good warm up, and before long, we were crossing the Blue Ridge Parkway and turning onto singletrack. 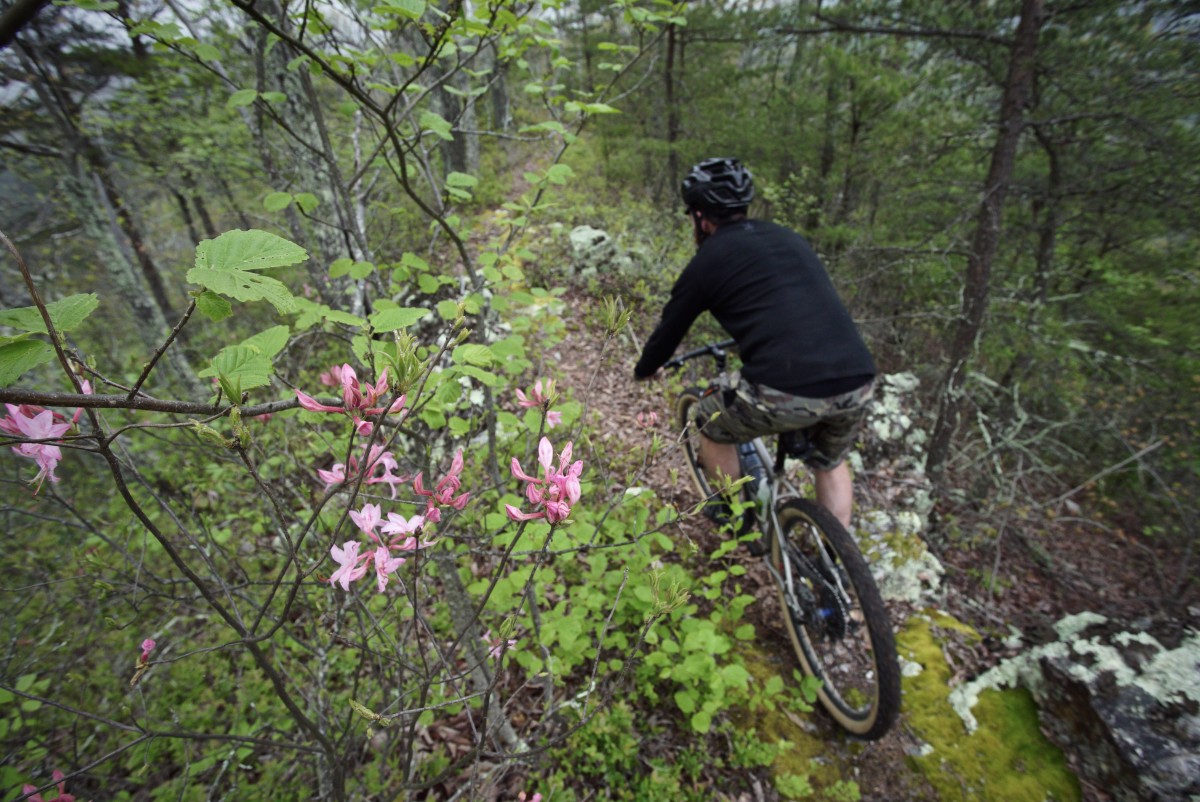 The first few miles were nicely built bench cut, bobbing up and down and gradually making its way up to Whetstone Ridge proper. The riding was fast and fun as the trail started to lull us into a false sense of security. After a short stint on an abandoned, grass-covered logging road, things started to get interesting. The climbs got steeper and descents became rocky and technical. The first big descent came as the trail broke to the north and dropped through a saddle towards South Mountain. The initial steep loose rock kept us off the back of our saddles, but it didn’t take long before the brakes came off and we were hauling through the woods. 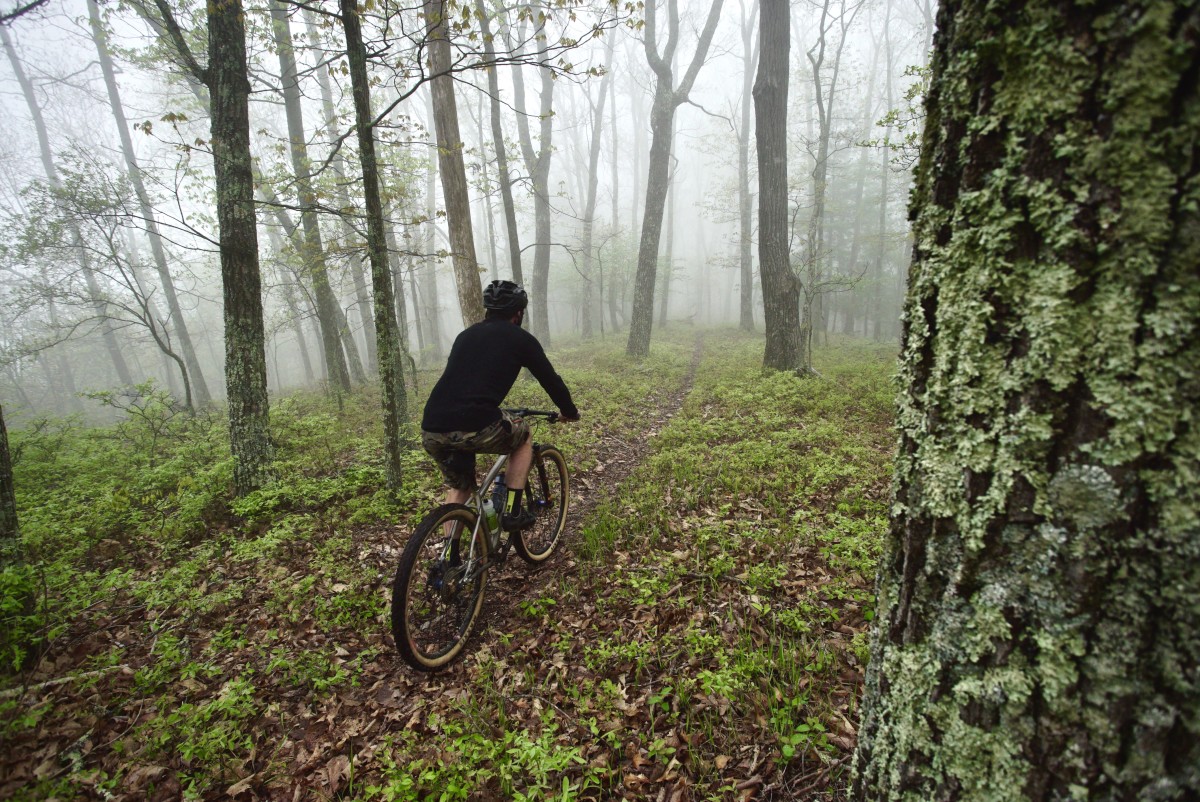 Steep, powerful climbs, boulder-strewn ridge lines, and white-knuckled descents were what characterized the trail as it traversed South Mountain. A majority of the ups and downs were rideable, but for most mortals, there were a couple of hike-a-bikes. At this point, we found ourselves in remote backcountry, with little wonder of why the drainages to either side of this abandoned landscape were named “Dismal Hollow” and “Dark Hollow.”

While traversing the ridge line, the boulder-littered crest of singletrack required concentration to not lose a wheel. When there was an opportunity to look up from the lichen-encrusted stones, the views were stunning–mountain laurel, black birch, and moss-framed ancient mountains, blanketed by the world’s largest deciduous hardwood forest.

Eventually, a trail marker appeared and routed a sharp southern turn. Two miles and 1,000 feet of elevation is all that remained between us and the parking lot below. Stellar hand-built, bench-cut trails made the riding fast and flowy. After hours of concentration on loose, chunky downhills, it felt great to open up and let the bike go. This was the icing on the cake after a long hard ride. 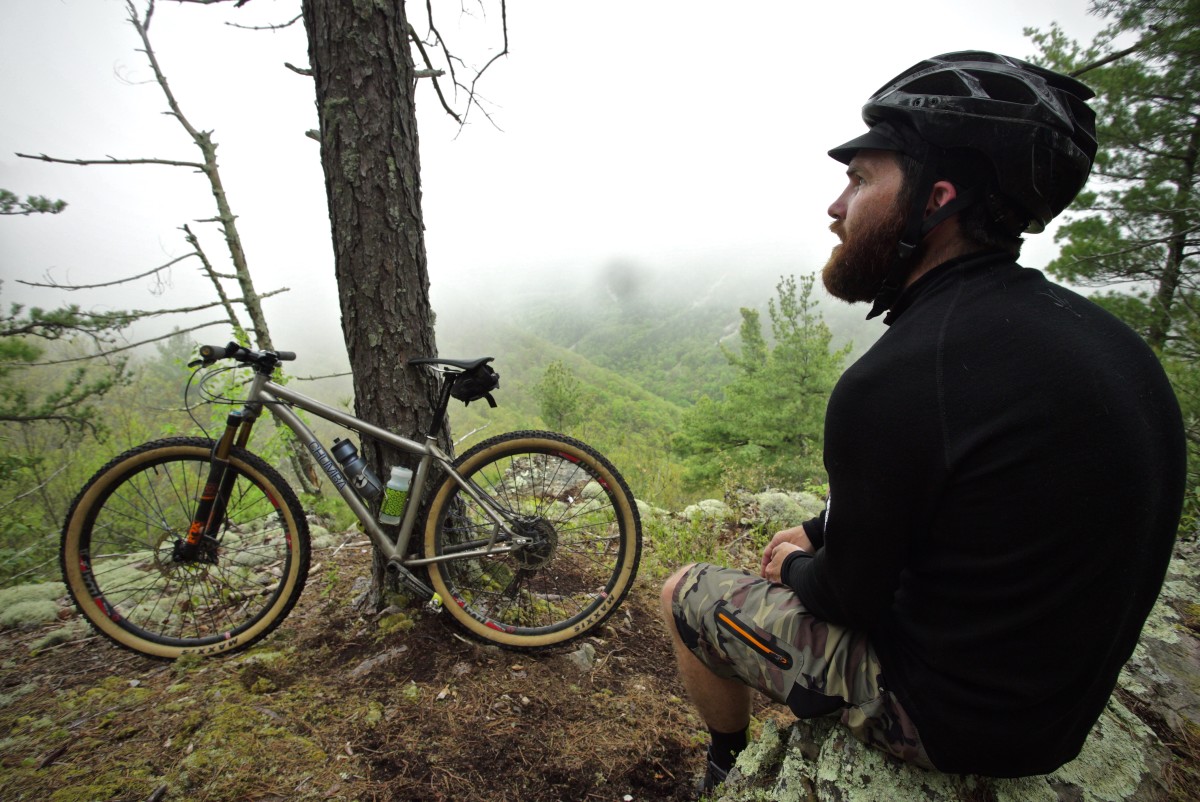 Gear
Why are Good Rain Jackets so Expensive? We had to...
Gear
Our Favorite Mountain Bikes of 2022, And All the Rest...
Gear
This Gift for Mountain Bikers Will Knock Their Socks Off
Gear
How Fat is Your Seat Tube?
Subscribe
Login
Please login to comment
1 Comment
Most Voted
Newest Oldest
Inline Feedbacks
View all comments