Grey winds whipped around us as we stood in the supermarket car park, shopping list in hand to buy enough supplies to last eight people for five days. Top of the list was enough beer and whisky to last us the week! 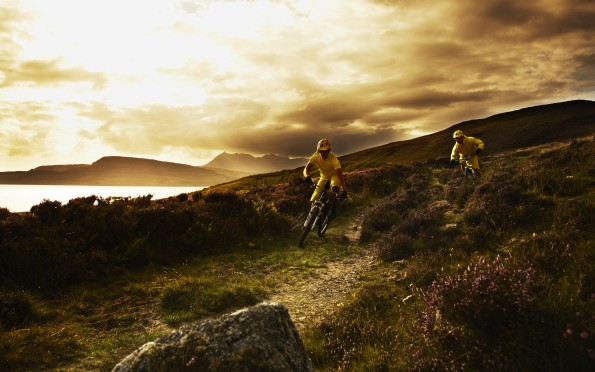 I was part of the advance party for a week-long mountain biking foray into the Torridon and Skye mountains situated on the northwest coast of Scotland. I was traveling with Euan Wilson, guide and owner of H&I Adventures, to help him set up a base camp in a traditional cottage situated smack-bang in the middle of this fantastic landscape.

I work for Haglöfs: we had designed a new range of mountain bike clothing, and wanted to expose the equipment to an array of challenging environments and riding styles. We’d enlisted H&I Adventures to host our riders and product designers from Sweden.

As we drove west from Inverness, the weather improved from overcast and windy to a calm and sunny 22 degrees. Once we arrived at the cottage, we set about furnishing the cupboards and fridge with food before settling down to a map, beer, and open-fire evening to hatch our plans.

I awoke in the small hours of the morning to hear talking, but not in English… the rest of the team had made it! 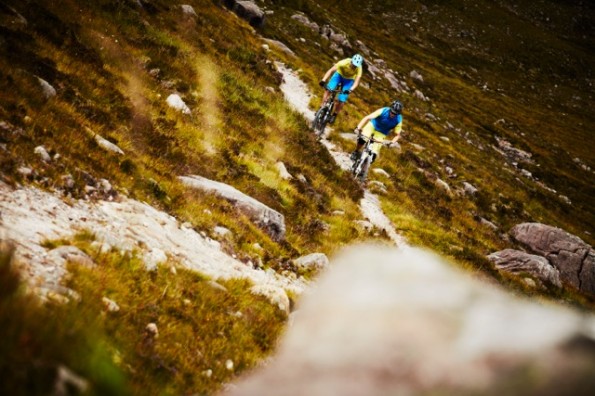 After breakfast, Euan gathered us around the kitchen table to discuss the day ahead. The words “epic,” “challenging,” and “spicy” were tossed around the table like rubbish on a windy day. Nobody really knew what he meant by “spicy,” but nevertheless we set off, following our fearless leader into the Torridon hills.

Shortly after our first climb to a 650m pass, the “epic” part of our tour started to unfold. The views were akin to full-blown 3,000m-high alpine scenes, but we were only 650m up on a Scottish mountain side! A ribbon of pristine singletrack wove its way out in front of us and disappeared out of sight, teasing us with the unknown. We dropped in in an attempt to chase the unknown, finding that the trail delivered us right back to sea level. 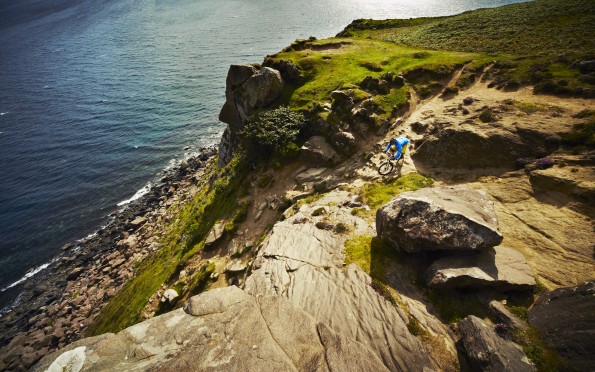 Day two started in a similar vein, but with the added bonus of riding the best descent in the country into the Torridon valley!

As ever, we had to work hard for our descents, but it was always worth it. The riding in Scotland was completely unlike any other riding that I have done. In the Alps, you can climb for a couple of hours and then enjoy an hour-long descent. The trails in Scotland, on the other hand, are “undulating”: short, sharp climbs followed by technical descents. The trails offered a new style of riding which allowed us to conserve energy for later in the day, which was crucial. 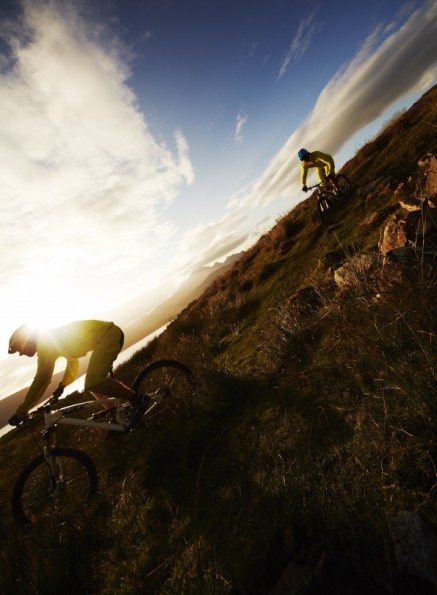 By late afternoon, we were deep in the Torridon mountains, surrounded by kilometer-high grey mountains, beams of sunlight shooting through the clouds like laser beams, as the clouds raced across the sky. As if that wasn’t dramatic enough, Euan turned to us and announced, “saddles down, suspension on downhill mode, and buckle up… things are about to get “spicy” around here!”

We raced down drops, over drainage bars, big rocks, loose rocks, and cobbled sections. It was a truly awesome, technical, fast-flowing descent, the likes of which I had never seen before! I had to employ every trick and skill in the book to make it down in one piece.

That night, we relived the day’s excitement over and over again while enjoying a glass of whisky. 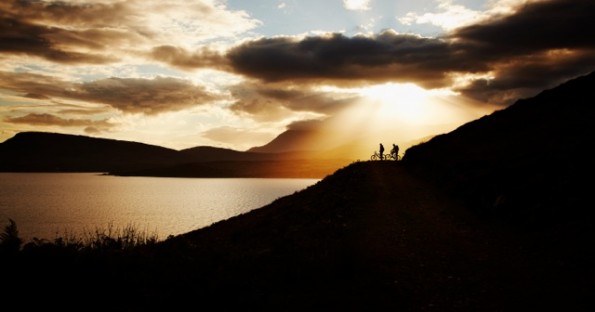 On day three, we headed to the Isle of Skye for some fun, frolicking on mountain bikes. We passed by Broadford and Portree on our way to the far northern end of the island, passing the imposing Lord of The Rings-style landscape of the Quiraing.

Once there, we started up a 320m road climb–a mountain biker’s dream. As soon as we reached the top of the climb, we peeled off on a trail and began to wrestle our way along a ribbon of perfect singletrack that cut its way along the cliff edge. 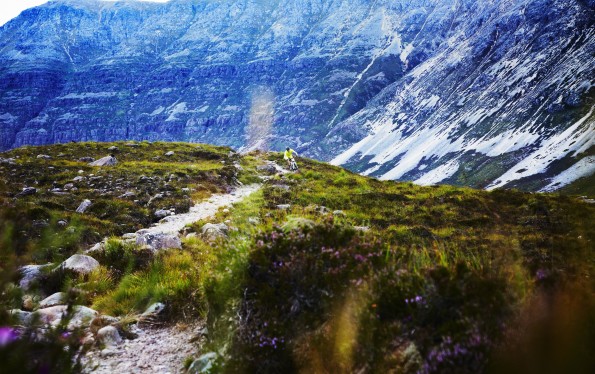 We had to negotiate technical terrain while keeping an eye on the 45-degree slope to our right that fell 150m to the sea below. Euan’s words, “fall to the left if you fall!” were ringing in my ears the entire ride.

We enjoyed an extended lunch and sunbathing session beneath a sunny bluebird sky, the light winds keeping the mosquitos at bay. Next up was a rocky descent down to the beach below, where we found a dinosaur footprint hidden amongst the seaweed.

We returned to the van tired and sore, but with a healthy glow from our day in the Scottish sun. 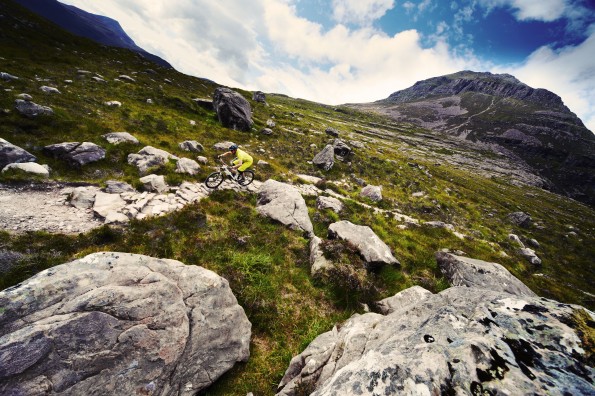 The following day we sailed back to Skye and set off along an old quartz mine railway track. It slowly gained altitude and opened up with views over the Cuillin Ridge, which cuts through the centre of the island and is world-famous for its impressive skyline. It’s the only Munro that requires ropes to summit, and is the perfect winter training ground for climbers heading out to the Alps or other far-flung climbing destinations.

At the top, the nature of the descent quickly became apparent: a grassy trail wove its way through old abandoned homes (which have lain empty for nearly 200 years) and out onto a rocky beach bejeweled with fossils! They’re hard to find, though: we turned over a million rocks with no luck, so we headed along the coastline to pick up our trail.

The singletrack hugs the lower flanks of an impressive sea cliff, before dishing out a couple of gold-star climbs. Even Euan, our intrepid guide, walked some of the route.

Throughout the ride (and indeed all, that week) we hadn’t seen another human being… that is, until we rounded the corner to find the Blue Shed Café serving a selection of coffees to put a London coffee merchant to shame and some rather spectacular home baking to help replace calories lost on the day’s ride. 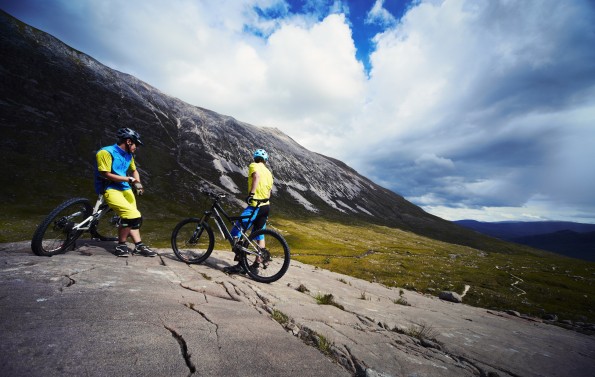 As we mounted our steeds for the final time, Euan explained that a part of this ride had been washed out over the past winter, but not to worry. It was a circular loop near the banks of Loch Maree that started off with a very challenging climb up a steep dirt road, but he assured us we’d be rewarded with one of the best views in the Highlands at the top.

For about an hour we picked our way along a fantastic singletrack before we hit the washed-out section. We saw Euan skipping around rocks and over drops, but we chose to take the safe option and walk.

Once the trail picked up again it was hard to keep our eyes on the track due to the stunning views over Loch Maree and beyond it to the Torridon Valley. 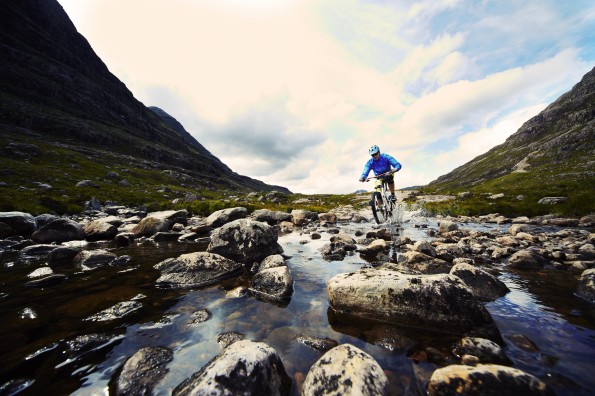 When we arrived back at the van, there were high-fives, man hugs, and “congratulations” all around. We celebrated with a feast of smoked salmon, venison, and Orkney fudge cheesecake, while watching the sun set out west over the Isle of Skye.

It had been an eventful week with plenty of ups and down–literally–and we raised our beers and made a toast to “spicy, epic” Scotland!

If this feature ignites your desire to travel with your bike, why not check out the amazing mountain biking trips offered by H&I Adventures at www.mountainbikeworldwide.com – they’ll surely have something to whet your appetite!

To join this Scottish tour during 2014 visit http://www.mountainbikeworldwide.com/bike-tours/scotland/torridon-and-skye, and check out the new Haglofs bike clothing at http://intense.haglofs.com

Man, this sounds like such a fantastic trip! I’d love to get to ride Scotland one day!

Wow…that seems like an appropriate use of the word ‘epic’. Pack me some hagus and a kilt and I’m there 🙂

22 degrees is Celsius, BTW 🙂
There are some brilliant places in this world, aren’t there? Just one more for the list.

I went to Isle of Skye in 2007 and was blown away by the majestic beauty… and dang, did I want my bike! This was a great tale to read. Thank you… BUCKET LIST.