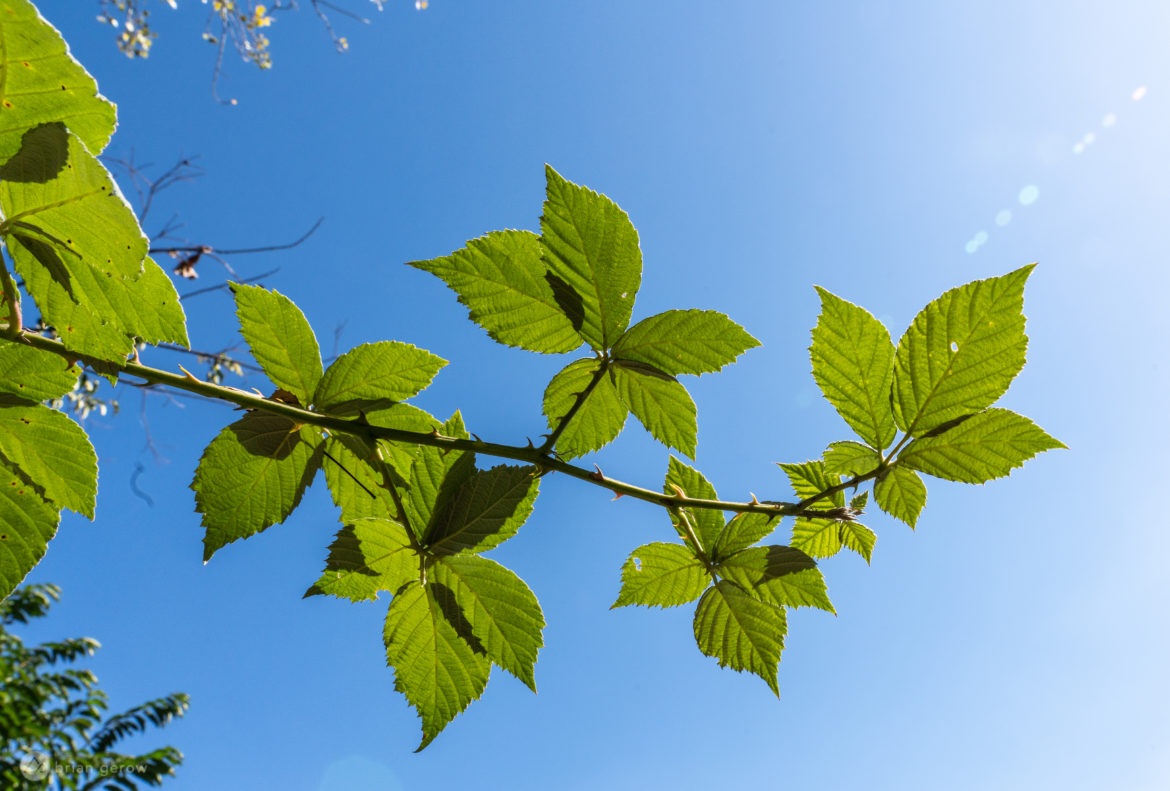 Left marching their natural rhythm, some plants would take over any open space and devour the sunlight and water from neighboring flora. These nearly unkillable species are able to survive outside their natural environment and often wipe out other more delicate native plants. Their bullying behavior often lands themselves on the invasive species list, which the USDA defines as “plants, animals, or pathogens that are non-native […] to the ecosystem under consideration, and whose introduction causes or is likely to cause harm.”

For many trail users around the globe, Himalayan blackberry vines pose a familiar and occasionally painful nuisance. Also known by their scientific name of, Rubus armeniacus, the perennial plants are natives of the culture-rich mountains of Armenia. According to the Invasive Species Compendium, the plant was “introduced outside of its native range as a cultivated crop for the production of sweet fruits. It soon escaped cultivation and has since naturalized in many temperate areas around the world.” The hearty vines now provide cactus-like obstacles alongside trails, thriving in any open space their seeds or vegetation land.

Blackberry plants can tolerate most climates between 31- and 47-degrees latitude, at altitudes below 1800 meters, including ecosystems with mean-maximum temps of 37° celsius, and mean-minimum temps of -4° C. They truly are the cockroach of vegetation.

Identifying blackberry plants is reasonably straightforward. At a prior job, I worked with a youth trail crew in Oregon, and roughly two-thirds of our time was spent performing trailside blackberry removal. I had bad dreams of running from tangled red and green spiny monsters for a while.

Some of the obvious call tags of these invasive vines are their long hexagonal stalks, and the way they spread in massive thickets in the bright sun. The plants thrive in disturbed soil where other species might struggle to establish root systems. They can grow more than 20 feet long, laying across vast fields in direct sunlight. Once blackberry vines intertwine and climb nearby trees they can be quite tricky to remove. In some areas, large crews are hired to march through the forests using long-bar chainsaws to mow down the plants like grass, followed by native plant seeding.

The plants’ flowers range from white to pink, and their bright blooms come seemingly overnight. It is best to cut the vines before they bloom if you are trying to clear them from alongside your local trails. While blackberries can spread via seeds and vegetation alike, stopping the seed before it develops will help your efforts. 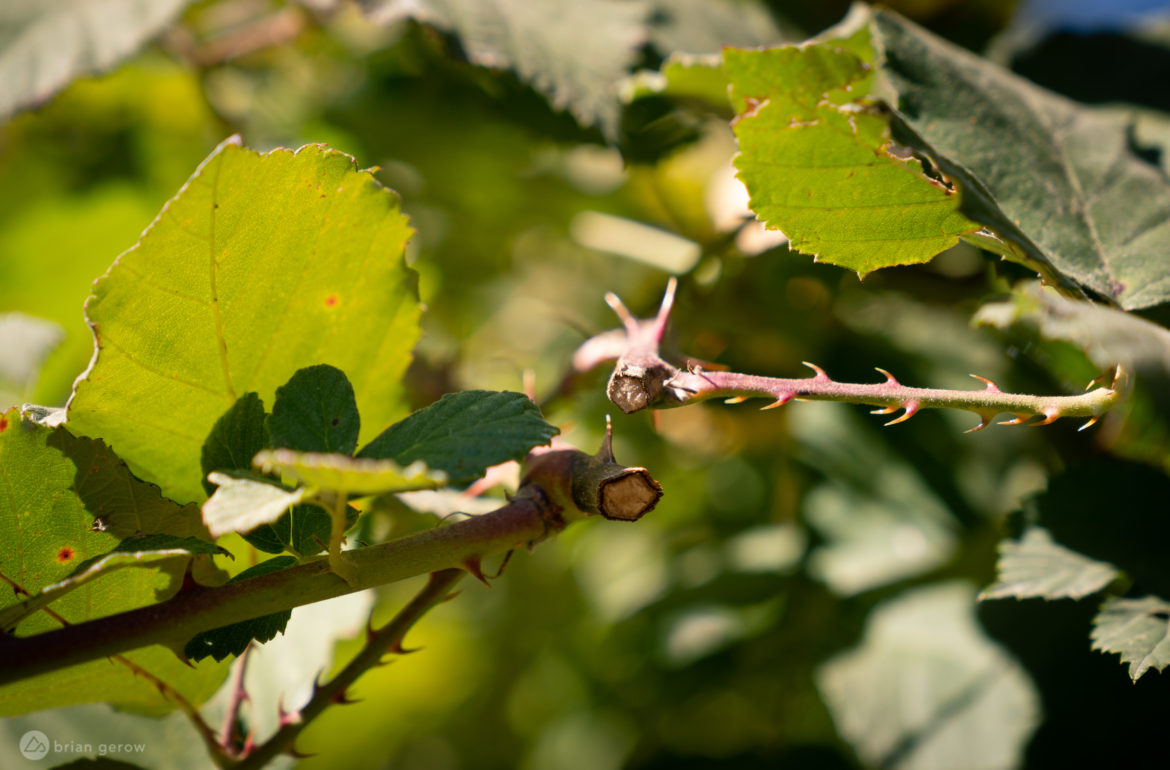 The plant’s central stock forms a hexagonal crosssection, with a wood-like character that grows harder and more brittle toward the end of the season.

The stocks start out light green in color, turning red toward the end of summer and early autumn. The vine’s coloration and angular shape help to differentiate it from Trailing Blackberry (Rubus ursinus), which is not an invasive plant. Trailing blackberry has a round vine with a blueish hue, far smaller thorns, and grows in small collections in the shade.

Check out this video on how to remove blackberries. Once the rootballs are properly unearthed, find the native plant species that thrive in the location where you are working and plant them vigorously. It often takes 2-3 passes through a field of blackberries to fully eradicate them, so make sure to return with a pair of clippers the following spring.

Blackberries cover a good portion of the earth at this point, and we will likely never cut them back to their natural population. Given that we have no choice but to suffer their scrapes, we might as well make some delicious food with their fruit. Check out this Berry Sorbet recipe from Oh She Glows next time you need a post-ride snack.

Directions:
In a blender (or a food processor may work too), process all ingredients until thick and creamy. Add the almond milk a little bit at a time, as needed. Serve immediately.

Rubbish.
This is just more Humans Know More Than Nature arrogance.
If humans are so smart then why didn’t they create the planet or even know HOW and why it even exists.
Humans are the 100% dependent guests on this tiny thing floating in the universe.
Now they want the host do do as they say? What arrogance!

The berries are awesome. Very versatile. However, The vine stalks SUCK!! They will easily rip your skin to shreds if you encounter them on a bike or even walking. Sometimes the thorns detach and get embedded in your body for a more painful event. I have gotten very good over the years of riding to spot the plant well in advance of being slashed by them them. Next to ticks, they are the most feared and respected of nature’s offerings in my riding region.

Interesting. I think I have these growing in my yard. 30 some years ago my Grandpa mailed us blackberry roots from the plant he had growing under the downspout at the corner of his house, on Vancouver Island, B.C., Canada. We had four plants, but only two still survive.
I live in SW Ontario, Canada. The map shown in the link does not have the plant as being in Ontario. I have never seen it anywhere else around here. Not in gardens, along roads or fences, not on the trails or in fields, and not in any wooded area. The scary plant to avoid when biking is the wild raspberries, and the ever present poison ivy.
My plants, which look just like the photos, have never had flowers. But they produce berries every year. Some years the plants do not grow much at all, some winters they die off quite a bit. Mild winters and wet summers let them thrive. The information states that they do not survive in temps below -18C. Our winters definitely go colder than that, sometimes staying down near -30C for days on end. After a cold winter, the plants will have a lot of dead loss, and not green up for a long time. Our summers also will get quite hot, and we can hit drought conditions. Hot, dry weather stops the growth.

Even if my plants are the same, I’m not particularly concerned. They don’t spread beyond what I can cut them back, and our weather seems to keep them under control most years. They grew really well this spring when we had record setting rainfall, but then they halted when it got hot and dry.

I do enjoy having my own blackberry supply, but it is crazy trying to pick them without significant blood loss! And the golden orb weaver spiders really love the plants.

blackberries and dewberries are native here in the southeastern continent of north america. i’m gonna let these tasty snacks stick around and pull up the privet instead.