The first time I rolled up to a drop at a bike park, I paused and looked down the gapped, zig-zagging wooden feature. I knew I could stick the landing, but I paused and mulled over the consequences. So did my buddy. “You gonna try it?” he asked. I wanted to ride the trail, but now I wasn’t so sure.

Most of us have seen a feature trail filter, known in some parts as a squirrel catcher, and often found at bike parks. Hell, maybe you’ve even been caught in one. It happens to the best of us. More properly known as a filter feature, these are the big intimidating rock gardens and drops or gaps that sit at the front of a trail, like a stocky bouncer would guarding the door of a nightclub, or a ‘You Must be This Tall to Ride’ sign posted ahead of a swirly roller coaster.

While they may feel like a signal to exclusivity, they’re meant to protect riders who aren’t yet ready for the trail from injury, and land managers from liability. If you’re like me, gripped with curiosity when you open a trail map at a new bike park and want to see everything there is to offer, these are meant to keep you from ending up like the cat.

“It’s become part of the standard of what everybody needs to do to protect themselves,” Aaron Rogers, president and owner of Rock Solid Trail Contracting says. Rogers worked for IMBA’s Trail Solutions for a number of years and now runs Rock Solid, the largest trail building company in the world.

There are two levels of protection, says Rogers: the sign and the feature itself. Through the sign, “You can tell people blah, blah, blah. This is a difficult trail, black diamond, ride at your own risk, you may encounter, unavoidable obstacles,” he says. “But we know people don’t really read signs all the time. So then the next layer of protection is the filter feature.”

The common ones are drops, “Just because you can make a drop look pretty intimidating, although they’re pretty safe for the most part,” Rogers says. Rock gardens are typical too, but the feature must set the tone for the trail. Typically the subsequent features and challenges on the trail are just as challenging or slightly less challenging.

Scott Chapin, a risk and insurance specialist with Marsh & McLennan Agency (MMA) handling insurance for mountain bike organizations, said the features have worked on him. “Personally, I have gone to a few trails that had a filter feature and decided I didn’t want to risk getting injured and turned around,” he told us through email.

Chapin added that warning signs may reduce the degree of liability. In a blog on the MMA website about risk on mountain bike trails, he wrote “Many of the claims we see are directly tied to technical trail features. Often, an injured party will allege that they were not properly warned of the ‘dangerous’ trail features, such as a berm, rocks or drops. We have seen claims paid in this exact scenario.”

Signage and filter features are recommended as way to potentially reduce liability. For an in-depth look into one case at the Whistler Bike Park, read Lee Lau’s piece on how signage was one part of the argument to keep liability off of Whistler in the case of a rider’s serious back injury.

IMBA Canada throws out some unique words when describing filter features. “A trail filter, sometimes referred to as a gateway or qualifier, is a high-skill-level, low-consequence obstacle that demonstrates the difficulty of the upcoming trail or trail feature.”

As a rider, I like the term qualifier. When I first started riding advanced and more technical trails, I felt like I was ready for some of them and the feature filter often served as a final test of sorts and a confidence booster before exploring the trail fully. That is, if you can nail it.

What are your favorite trails and filter features you’ve ridden, or decided against?

Trails
Challenges that Trail Builders in the UK Must Overcome
Trails
Building Trails and a High Alpine Mountain Bike Destination with...
Trails
Trail Building Classes and Recreational Investment: Trinidad, Colorado Plans for...
Trails
The Fire and the Trail: A Changed Perspective on Changing...

Trails
Trail Flow: Copper Mountain adds Pump Track, Adaptive MTB Trail...
Trails
An Intro to Bikerafting: How it Works, and How to...
Progression
Mountain Biking with Asthma: How One Elite Athlete Controls it
Gear
We Tested 5 Tubeless Tire Sealants to See Which Ones...
Subscribe
Login
Please login to comment
14 Comments
Most Voted
Newest Oldest
Inline Feedbacks
View all comments

Seriously, who sues when you crash? The squirrel catcher is a great way to show someone the skill required so they don’t end up walking their bike down the hill, but litigious people suck.

100% agreed and it’s likely true that nearly everyone agrees. However, when push comes to shove, i.e. you’ve somehow got to pay for medical bills and your new life in a wheelchair, many have no other choice. Not saying it’s right at all of course.

I’m in no way advocating for litigation for MTB related injuries, but they are an unfortunate side-effect of the United States’ healthcare system and lack of universal paid time off for illness/injury. I’m not a fan of it but I think if people are really honest with themselves they’d agree most people would turn to a lawyer if the only alternative is a lifetime of financial ruin. Again, not saying its right just saying what is…

BTW Zoso, apparently yours was the comment that was counted but I couldn’t see earlier. Didn’t mean to rephrase exactly what you said.

Just broke 3 ribs, fractured sternum, torn rotator cuff, and a partially collapsed lung on a jump at a park. With all this pain, still never thought about suing.

You are all doing a great job with articles like this that help educate riders about trails and why certain things are done. As a long time trail designer and builder I appreciate it. ✌️

I helped build some short, difficult trail sections (basically built a Lunch Loop, but in Laramie) a couple of years ago. Putting qualifier features in was a must to make sure folks knew what they were rolling into. Great article explaining how/why this is done!!!

At my local city dirt jumps and pump track they have a great qualifier for the big line. The platform had a nicely built 2-3 foot drop to the roll in. Even if you have the courage to drop in you have to nose into smoothly to have the speed for the wooden launch ramps on the doubles. I have many people unable to commit to the drop but courageous enough to attempt the jumps, even though they were above their skill level. 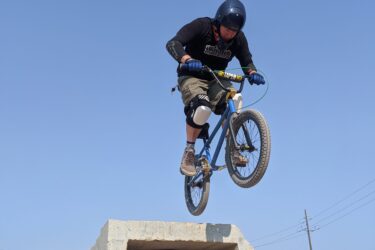 My favorite qualifiers (I prefer that to filter as well) are rock features between trees and steep inclines leading to big drops.

The fist time I heard of trail filters was several years ago when I was photographing Aaron Rogers at the top of his biggest filter, a drop taller than him, on the new Sylvan Hills trails in Wausau. Rock Solid builds great trails. Devil’s Den down Bentonville way is awesome! His campground at Copper Harbor is pretty cool, too.

9 Line SLC for sure. Unique technical challenge to enter the big jump line scared me off for a couple visits. Kind of a minimal approach acid/ bomb drop to E- ticket roll in.