While waiting for the bike trails in Grand Junction to dry out, we took off on a ski trip.  Because we were skiing in several of our favorite bike destinations, this trip gave us a great chance to start planning future bike trips.

Normally when we bike in Crested Butte in late July, we camp.  Camping is cheap and usually awesome, but Crested Butte is plagued by afternoon thunderstorms in the summer, and during almost every trip we end up with a soaking wet campsite at some point.  On our recent winter trip, we obviously weren’t going to camp, and staying in Gunnison made sense because we were planning to ski at Crested Butte one day, spend a second night in Gunnison, and then leave and head to Monarch Mountain on Sunday.

We chose the Western Motel because it was inexpensive, clean, and we’d had friends who stayed there.  For the most part, this was a great little find.  It was right in town, close to restaurants, and quiet.  I’ll say this, though: take a small fan with you in the summer, and one of those tiny keep-at-your-desk fan/heaters for winter.  The heater/ac there sounds like a jet plane when it comes on… which it does about every 20 minutes. Thankfully, our own heater/fan kept us warm all night, and we didn’t have to listen to that monstrosity.

That one small issue aside, it was good to check out this and other motels in the area, just in case we ever need them for summer bike lodging. Obviously, if you were doing all your biking in Crested Butte, staying in Gunnison wouldn’t make much sense, but if you planned to bike in CB and also ride at Hartman Rocks, Gunnison might be a good stop for you.

On occasion while camping on the Taylor River road, we’ve decided to go out to dinner instead of cooking in camp. (This often coincides with those thunderstorms I mentioned…) We’ve never really known any great places to eat in Gunnison, though.  Our ski trip gave us a chance to check out some new places, and boy did we luck out!  The first night we found an awesome little dive called Anejos.  This Mexican joint is fabulous! The salsa was fresh, the margaritas reasonably priced ($4.50 for a medium) and the food was excellent. I judge most Mexican restaurants by their mole, and Anejo’s was sweet, spicy, and delicious.

The next night we, of course, had to find some pizza.  I did some research on Yelp and Trip Advisor and came up with Pie-Zan’s.  The worst anyone said about it was that it wasn’t really “New York Style” pizza as the place claimed.  Whatever it was, it was great! The restaurant itself isn’t much to look at, but the pizza was hot and tasty and the beer was cold.

So far this trip had provided us with a wealth of great info for future bike trips to the area! Oh, so what about the skiing at Crested Butte?  Well, that just reinforced our belief that Crested Butte is a great summer destination.  The biking there is way better than the skiing; most people must agree with us, because we were able to easily find a parking space on Main Street and empty bar stools at The Brick Oven.

Of course, staying in Gunnison in the summer puts you right on track to head to Poncha Springs or Salida for a shuttle ride to the top of the Monarch Crest Trail.  Honestly, I’d never been on this portion of Hwy 50, driving from Gunnison over to Frisco, and getting a chance to see not only where the Monarch Crest Trail goes, but also several fourteeners, was pretty cool.

After you ride the Monarch Crest, you might as well hang out in Salida for a few days.  After all, according to Greg, there are plenty of trails and bike shops to keep you entertained!

Oh, and you just never know what you might see driving down the highway. 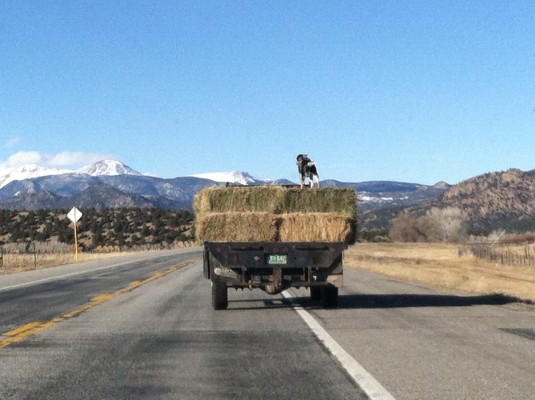 Our final ski destination was Vail.  We have friends in Frisco, and those friends had discounted tickets (I was not about to pay $129 a day to ski at Vail).  Our friend has not only skied at Vail a lot, but has also mountain biked in the area quite a bit. She was able to give us the low-down on the Commando Run as we skied the back bowls at Vail.  It was cool to be cruising the cat track back to the lifts in the bowls and have her say, “See that ski track over there on the side of the hill?  That’s right where the Commando Run goes!”

In the end, yes, we had an awesome ski trip.  Vail and Monarch are definitely places I plan to ski again.  Still, it was interesting to see how much bike trip research we could get in during a February ski trip!  Of course, now that all that bike beta has me ready for a bike ride, rain is in the forecast. Still, once April arrives, biking in Grand Junction will be in the front of my mind, and so will summer trip planning!

Your Turn: Have you ever visited a destination in the winter, and then just had to come back the next summer? Tell us about it in the comments section below!

Ironically, skiing is how I first fell in love with Fruita!

I was on a spring break skiing week in Aspen (staying at a hostel in Glenwood Springs and commuting) in 2004. Unseasonable warmth drove on-mountain temps into the 60s and I tired of skiing on a big white slurpee, so I took my last day, drove down to Fruita and rented a bike. I put in 20 miles on the Koko trails and decided I would come back for an extended stay and gathered as much beta as possible before leaving. After moving to Colorado Springs permanently, Fruita is still 5.5 hours from home, but is now a regular stop!

I also gathered data for riding in Taos NM, while on a spring break ski trip there with my daughters.

That’s awesome! It’s really cool to be able to ski and bike in or near the same areas so that you can experience them at different times of year too. It was bizarre to actually find parking on main street in CB. That never happens in the summer!

I’ve still got to ride the Butte (closest I’ve come is Hartmans) if only to check out your statement that the riding is better than the skiing. Proportionally speaking, I’ve probably skied more places than I’ve ridden and the Butte is one of my faves. Viciously steep, gnarly and lacking creature comforts; sometimes I wonder if they even own a groomer–it’s my kind of place. Conversely, most of what I’ve seen about biking around the Butte, while epic, scenic and full of vertical, appears pretty tame; mostly buff and largely lacking in technical challenge. That’s why I haven’t so far made the effort to go there compared to so many other destinations. I must rectify that, especially since it’s relatively close to home.

@John Fisch: CB is definitely not as technical as say…the Lunch Loop trails here, but the views are awesome, the downhills are fun and I think the climbs are worth it. For me it’s just a nice change of scenery to get to bike in the trees. I think my problem with the ski resort was 1. I didn’t think the layout was great…so many lifts and they all only seem to take you to 3 or 4 runs…2. the runs were short (unless you were skiing the funnel or something, which I definitely wasn’t). BUT that’s what’s great about it right? There’s something for everyone! Skiing or biking!

Indeed. I’m on the high side of 400 trails now, and there still remains far too much for me to explore before I’ll be too old to do it.

Ditto with the skiing. 73 resorts under my sticks and I’ll never make it to the two or three dozen more that sound like places I’d really love to go!