I lived in the Bailey, CO area for a summer back in 2008, guiding wilderness trips for Narrow Way Expeditions, a part of Camp IdRaHaJe. As I mentioned in a previous blog post, one of my biggest mountain biking regrets from that time was not getting to ride the epic Kenosha Pass to Georgia Pass route.

This summer my wife and I didn’t want to be completely hedonistic, shredding trails across the country and just living it up for two months (although it’s been pretty fun so far!), so we decided to do something we’ve talked about for years: returning to camp and giving back a little. We decided to volunteer as cooks for Narrow Way for a week… and I got to spend a day checking the Kenosha Pass to Georgia Pass route off my list! 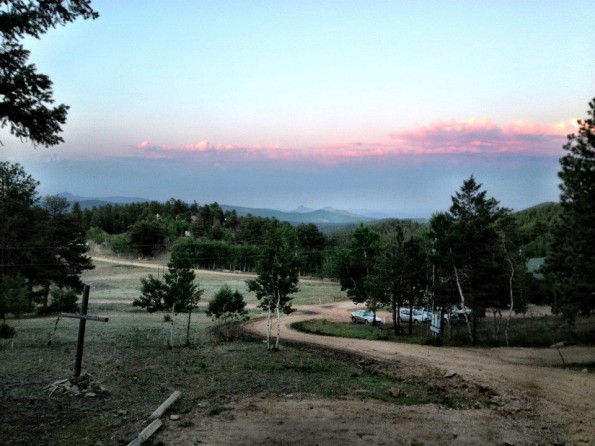 View from the Summit House, where Narrow Way eats when on camp.

Maddslacker has written in detail about Kenosha Pass, so I’ll spare you most of the details about the actual trail tread. But my ride on it was harrowing to say the least!

To start, this is a long route: 12 miles each way, with about 6,000 feet of climbing! I began the ride by flatting twice within the first 6 miles. Since I only had one spare tube, I stopped at a trail junction to try to patch it after my second flat. It was a serious snake bite, so it took two patches to fix, leaving me with only two patches left in my kit. With 18 miles still to go, I considered turning around to play it safe. 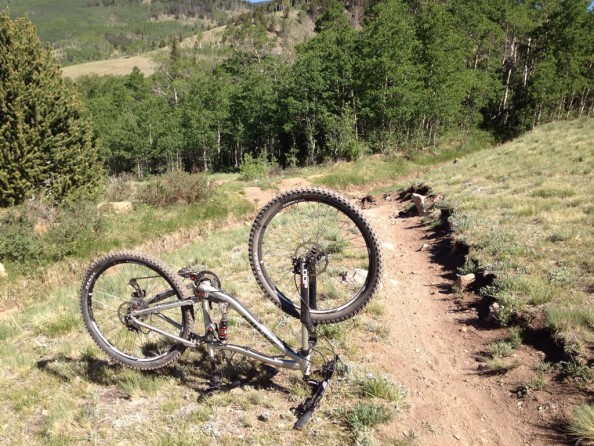 As luck would have it, a kindly pair of fellow mountain bikers came along and offered me one of their spare tubes! I hadn’t put the patched tube in yet, so I gladly accepted their offer and put in a brand new inner tube. With enough supplies to fix at least two more flats, I felt confident enough to carry on.

Further up the trail, I was cranking along, slowly grinding through the 6,000 feet of climbing and bam! my chain got sucked between my cassette and the spokes. It was wedged pretty good, and at first I thought I was doomed. Thankfully, I managed to pull the chain free… and the cassette was miraculously undamaged! Onward and upward. 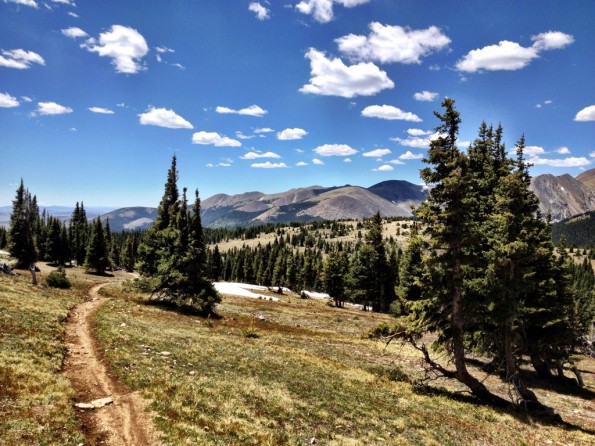 As I broke the tree line, I started to feel some resistance as I sucked water from my hydration pack. When I hit a trail junction shortly before the top of the pass, I opened up my pack to check my water reservoir–it was almost empty! I was at least 10 miles from the car, at high elevation, exposed to the hot sun, and almost out of water. I made the tough call to turn around–although I hadn’t quite reached Georgia Pass, I had broken above treeline and ridden the lion’s share of the trail.

My turn around point. The Jamis Dakar 650b Pro handled it all superbly–both the climbing and the descending. I have been having an amazing time on this bike.

The ride back down was a blast! There were rocks and roots everywhere, with plenty of opportunities for air. I had the technical sections under control, but at one point my front tire caught the loose dirt on the edge of the trail, and down I went. I lay there for a while catching my breath, making sure that nothing was seriously injured. The bike looked OK too, despite the handlebars being twisted a little.

Unfortunately, there were several miles of exposed (read: sunny, hot) climbing right at the end before I could make it back to the truck. I ran out of water well before the last climb, and was starting to feel seriously dehydrated. My legs were feeling decent, but I was so dry that I began to hike most of the climbs. At one point I even stopped to pull my reservoir out and drink the small bits of water that my hose couldn’t suck out. 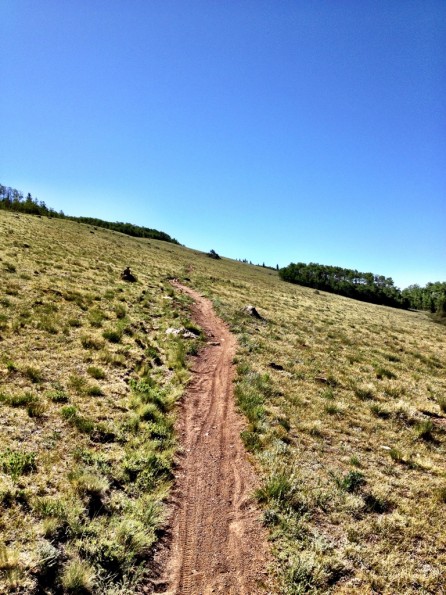 The final sunny, exposed climb. I shot this photo on the way down… it was a death march back up!

In the end, I made it back to the truck safely, although a little dehydrated. Despite all of the hardships, I had a fantastic time out on the trail!

Nice report, glad you made it back in one piece! I had a similar experience yesterday – flat tires, wedged chain, out of water – but I’ll leave that for another post. 🙂

The first time I rode this I also ran out of water and turned around at the Jefferson trail junction.

As for flats, I flatted my tubeless front tire at Mt Falcon this past week. : /

Before Georgia Pass, I usually chug a bunch of water at the car, fill a 100 oz. Camelbak and then pack a 16oz. Gatorade to chug right before that last stiff climb. You can also pack some iodine and refill along Jefferson Creek on the way back down – lots of water crossings as I remember. I also think that section of trail is more fun than the out and back.

Going to the top of the pass and back is fun, but it is well worth it to keep going and ride to Breckenridge. There is some really fun downhill and rock sections in there. Just need another vehicle to close the loop. Or, like a really hard-core group we encountered once, you can ride back from Breck. I don’t think I will ever do that…

Btw, if you had a big chain suck you better take a good look at the spokes to see if they have been scored at all. In my experience they are destined to snap at some really inconvenient time.

What a great place to ride!

Thanks for the condolences everyone!

Boy Greg, sounds like quite an adventure! This will have to be something I check out on one of my future trips to CO.

Out of curiosity, did the lack of this years snowpack mean less water at the creek crossings, or was there still water flowing? I’ve started carrying iodine tablets, and soon hope to invest in another filter system, for longer rides like this. You never know when you’re going to need water, better safe than sorry.

@phranquay, I used to always carry aquamira water treatment with me… And after this ride, I bought some to carry around in my pack again!!

Never liked Iodine–always happy to use the volume in my pack to carry a filter for the long rides. Delicious water!

Great story. I have a fairly serious fear of dehydration so I really back your call to turn around. It remind me of mountaineers Retreating from a summit attempt to live and climb another day.

Well I don’t think I was anywhere near survival mode, bc if I was there was plenty of snow around. However, I just figured I wouldn’t push my luck and risk getting to that point!

Awesome report, with lessons learned even for those of us living vicariously at low elevations 🙂 Just Monday I did the same hard look at a trail junction and the sun and the rock gardens and my hydration pack. I to regretfully turned around, although the terrain between me and the truck was more prosaic, it was significant, and the fun stops when the head aches start.
2nd lesson. 2 is one, 1 is NONE. Critical spares, bring 2 or 3. Cheers

Sounds like a great ride.Glad things worked out.Same water issue happened to my sons when we rode Rabbit Mountain.Have you looked into a Steri Pen?

Wow, despite the water and flats issues, this looks like a wonderful ride.

I am really starting to hate reading all these blogs (or is it really jealousy?) I am positive there was enough room in the back of the truck for me and my bike.

ps I am a really good cook…..and would of cleaned the dishes.

Brian, we could definitely use a cook and a driver!

Just rode this again yesterday. I packed a 24oz bottle of sport drink and filled the 100oz bladder of the new Dakine hydration pack I just got in for testing. I saved some of the sport drink and downed it on that nasty climb coming back out. When I got back to the car I checked the Dakine and it had less than 10ml of water left!