After spending a week hunting for a place to live in Salida, we were eventually successful! Yeah, I know, you figured that out already…

After finding our future home, Summer had to hop a plane back to Georgia, as her work was getting intense, and she also wanted to attend a family reunion. While we had both been working during the past three weeks we were on the road, things were really going to start amping up for her with the beginning of the school year.

However, it was the beginning of August, and since we weren’t able to move into our new place in Colorado until the beginning of September, I didn’t want to return to the 100 degree heat and humidity in Georgia any sooner than I had to. So, I dropped Summer off at the airport and picked up Max, a good friend of mine from Georgia, on the same day.

Max and I headed back toward the mountains, with the destination of Steamboat Springs, Colorado. I had heard much about Steamboat, but never had a chance to so much as drive through the area. Finally, it was time to check the scene!

On one of our first days in Steamboat, we wandered into a bike shop to ask for trail recommendations. All the people we spoke to initially told us the same thing: Ride Emerald Mountain. We even had one local tell us to “ride everything at Emerald, and then go from there.” So, we planned an epic loop to hit most of the best singletrack that Emerald has to offer.

We began our route by climbing up the front side of the mountain, mostly on the Lupine Trail. At first, it was hard to determine which turns to take on the lower mountain, but after a few false starts we hooked up with the main climb and began ascending. The lower trails were very exposed and quite hot, but the higher we climbed the more trees we encountered, providing a welcome relief from the sun.

We slowly gained elevation as we spun up the mountain, and that elevation eventually affording us an amazing view of the town of Steamboat and Steamboat Ski Resort: 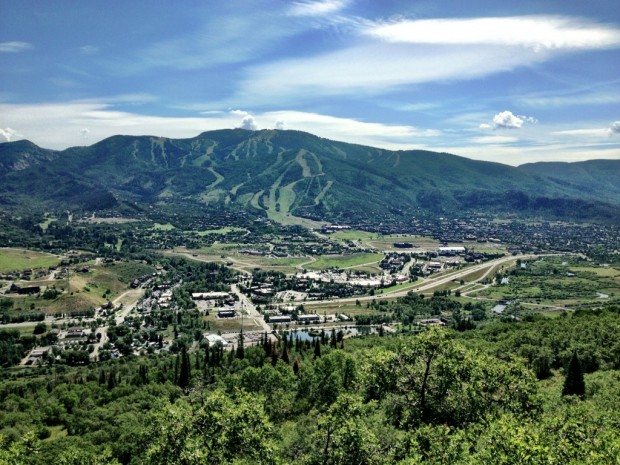 While most of the climb was buttery smooth, with just a few rocks mixed in, we stumbled upon the one truly challenging section on the mountain: Little Moab. While you can bypass this steep, rocky ascent, we decided to hike-a-bike up it and bomb back down. 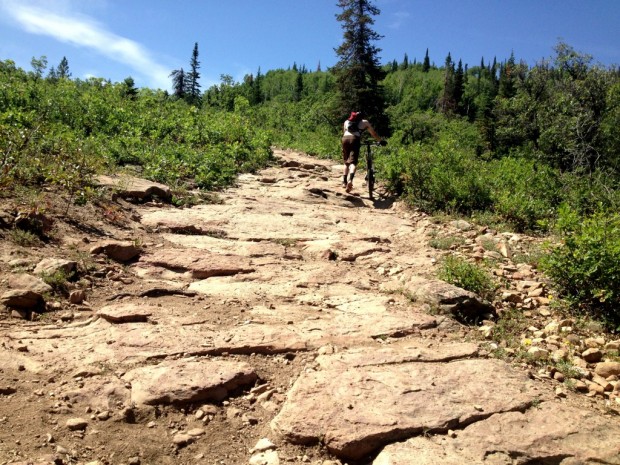 After a fun diversion, we continued our climb. As we neared the top of the mountain, we entered some aspen groves, and the dirt composition transitioned from dry and sandy to tacky and loamy. 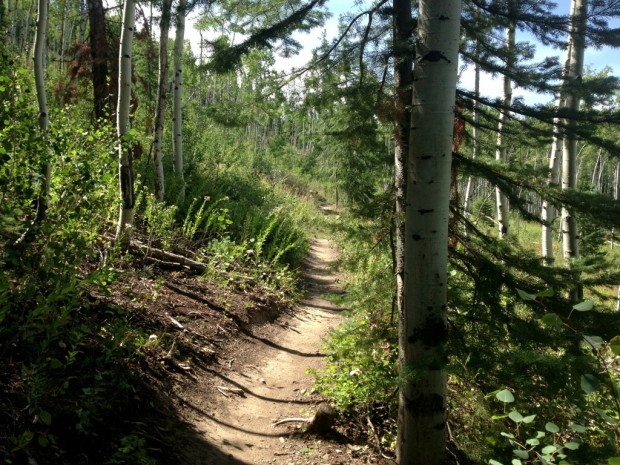 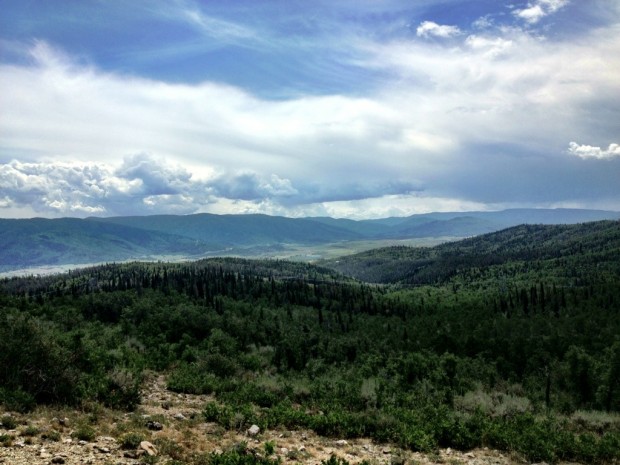 We were operating on limited time this week, so we decided to just go for it and drop down the backside into no man’s land.

The descent down the back was fantastic! As we whipped down the mountain, whooping and hollering, I still couldn’t help but think about the possibility of getting stranded on the backside, a mountain away from town, in the middle of a thunder storm.

After a rip-roaring descent, we arrived at the bottom and connected across on the gravel road to our intended singletrack climb. After less than a quarter mile, I started to hear a horrible grinding noise from the rear end of my bike, and my rear hub imploded: I couldn’t pedal, and we had about a 5-6 mile climb before we could descend down the front side of the mountain.

I detached my chain, and dropped back down to the gravel road. According to the map, the best thing to do at this point would be to circumnavigate about 7-10 miles around the base of the mountain, back into Steamboat. What a bummer!

Thankfully, near the bottom of the trail, I bumped into a couple of other riders that were just finishing up. I explained my predicament, and they were nice enough to give me a lift back into town. 10-mile walk in a potential thunderstorm, averted!

Having trails as beautiful and as expansive as those on Emerald Mountain, easily accessible from the town of Steamboat, is a true luxury! However, the recommendations we’d received at shops in town left me a little disappointed after my ride. Sure, we hadn’t ridden everything there was to ride, but we had enjoyed a healthy 18-mile sampler. And, from our vantage point on Emerald Mountain, we could easily tell that we weren’t truly in the big mountains, which are located just to the east of Steamboat. Surely there had to be trails in those mountains that were bigger and more epic than Emerald?!

Spoiler alert: there are! It took us a couple of days to get a real route recommendation, but eventually I was able to score the goods! While I think Emerald Mountain is a great resource for the Steamboat locals, and while it’s worthy of a day of riding if you’re spending a solid week or more in Steamboat, this isn’t the place to go if you’re going to be spending just one or two days in the area.

Perhaps the local shops just send people there because it’s convenient? Maybe they think the average idiot that wanders into their shop asking for trail recommendations isn’t capable of tackling the high-alpine riding in Steamboat? Whatever the case may be, if you only have one or two days to ride and you’re willing to log lots of miles at over 10,000 feet, don’t listen to those guys: stay tuned for my Rabbit Ears Shuttle ride report.

Gear
Never Underestimate the Power of a Good Zip-tie
Gear
These MTB Deals are Fire, including 40% off Patagonia Dirt...
Gear
The Maxxis Minion DHF Tire is Still the One to...
Gear
Mountain Bike Tire Repair Tips: From Emergency to Semi-Permanent
Subscribe
Login
Please login to comment
6 Comments
Most Voted
Newest Oldest
Inline Feedbacks
View all comments

I got the same recommendation when I visited Steamboat a couple years ago and since I was only in town for one day, this was the trail I rode.

As you said, the first part of the ride really isn’t spectacular: hot, exposed, and mostly devoid of singletrack. However, the upper portion of Emerald Mountain is what I had hoped to find in Steamboat. Excited to read about the even better trails you found!

Coming atcha the rest of this week! I did 5 days of riding in Steamboat, and I still want to get back there and hit the abundance of trails that I haven’t gotten to ride yet!

It is interesting to read other people’s opinions on Steamboat’s single track. Regardless of some of your complaints and praises, we are very proud of our trails. It has created a huge riding community.

Greg, What’s your definition of epic? When you asked for recommendations did you explain that you wanted “epic, high altitude” trails or did you just ask where are the good trails? Those trails on Emerald that disappointed you just happen to be the exact trails of the Steamboat Stinger 50 mile race. A race that sells out in hours and has received rave reviews for it’s course.

I think the Emerald trails are a great place to ride if you’re only in town for a day or two. They’re easily accessible, can be fun for all ability levels and you can ride for only an hour or 5-6+ hours. When you’re done, you’re right back in the center of town and can go explore and enjoy the non-biking aspects of town.

Not everyone wants to “log lots of miles at over 10,000 ft.” All of the shops in town are well aware of those rides, though. They would have gladly recommended them if you specified that’s what you wanted.

Hi 12snap, this is my definition of epic: http://www.singletracks.com/blog/mtb-trails/ride-report-rabbit-ears-shuttle-steamboat-springs-colorado/

And just because they’re an awesome race course and a popular race doesn’t mean they’re the best trails in town… Let me give you a similar example. I now live in the town of Salida, and we have two great trail systems accessible from town. We have popular races that are run on these trails, and they’re extremely fun. However, if someone shows up in the middle of the summer and asks for a ride recommendation, I’m not going to point to the in-town trails because “you can ride for only an hour or 5-6+ hours. When you’re done, you’re right back in the center of town and can go explore and enjoy the non-biking aspects of town.” Rather, I’ll ask them if they’ve ridden the Monarch Crest or not, because that’s a truly epic, world-class ride. So for me, if I only had one day in town, I’d rather spend it doing the #1 best world-class ride, not necessarily the most convenient ride… and I don’t think it’s a stretch to assume most riders are on that same page.

As you’ll see from my Rabbit Ears shuttle report, after some more chatting I was finally able to get good info, specifically from the guys at Orange Peel Cyclery. And as you’ll see tomorrow, I also met up with one of the dudes from Steamboat Ski and Bike Kare, and he personally showed me some of the more under-the-radar trails up in North Routt National Forest. My main beef is with the thinking that everyone “Should start at Emerald Mountain, and then go from there.” Emerald is good, but not great, so I simply don’t think that’s good advice.