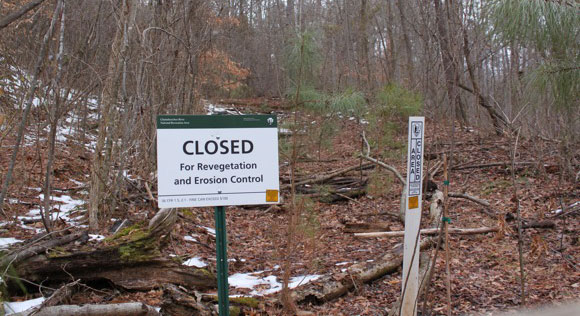 Professional mountain biker Mike West was caught riding in an area around Flagstaff Mountain back in March that’s closed to protect golden eagles. After pleading guilty to “driving a vehicle in violation of the regulations,” he was sentenced to 60 hours of community service, three days in jail, and slapped with a $500 fine. His three day prison sentence and the fine have been suspended – as long as he doesn’t get in trouble over the next year. The article I read also notes this isn’t West’s first offense – he was given 12 hours of community service in 2006 for a similar offense – so that may have played into the sentencing decision.

Boulder is clearly sending a message with the prosecution and harsh punishment. Unfortunately the timing wasn’t great: the city council was set to consider allowing mountain bike acesss in the West Trail Study Area just days after the news broke. Not surprisingly the council “voted to uphold a current ban on mountain bikes in the vast majority of the study area.” (though we’re guessing they would have done this anyway)

West says he didn’t know the trail was off limits and he regrets his actions. He’s scheduled to speak to students in Boulder about the negative consequences of riding illegal trails and the environmental impact that often follows. During his trial West was suspended from the Yeti team, though he’s since been reinstated by team leaders.

The video below shows a short interview with Mike and I really found myself identifying with what he’s talking about: the desire to explore new trails, experiencing natural beauty from the seat of a bike, and also the need to get involved in advocacy groups like IMBA. Very few of us can say we’ve never ridden an unofficial mountain bike trail; this incident should just solidify our resolve to get more great trails open to bikes and to promote the low impact nature of mountain biking to non-riders.

Trails
New Tech Trail Coming to AR, Big Grant to NC...
Gear
Why are Good Rain Jackets so Expensive? We had to...
Gear
Best Mountain Bike Gifts Under $50
Progression
How to Stay Strong in the Off-Season, Even if You're...
Subscribe
Login
Please login to comment
13 Comments
Most Voted
Newest Oldest
Inline Feedbacks
View all comments

i understand rules are rules, but jail time + community service + fine? sounds a little extreme. also, i’m no enviromental expert but i really don’t see how a mtb can endanger an eagle.

I’m with you on the eagles… how does mountain biking have anything to do with eagle habitat? But as it was off limits, I still think that’s a really hefty sentence if he honestly didn’t know the trails were off limits and was just riding his local territory.

Yikes! Sending a message for sure and yes sounds harsh but think about it, this guy’s a pro rider. He not only represents cycling companies and mountain biking as a a sport, but I’m sure all the local kids look up to him and if he’s going out there riding, they’re gonna think it’s OK and ride out there too. Pro riders are role models. I also think you’re crazy if you believe he didn’t know the trail was closed…come on! He’s been riding out there ever couple weeks.

I guess it’s just a crappy situation. Honestly, I can’t say you wouldn’t find me out there if I lived nearby but I think a pro should probably think twice. I guess the good thing is as long as he doesn’t go illegal trail raiding for a year the fine and jail sentence is waived.

I think eagle nesting areas are off limits to everbody. Won’t even try to guess if he knew or didn’t. I accidentally got on a 100 yd section of hiker only boardwalk that goes over a marsh last week. I stopped and asked the lady I met in the middle to please not push me off. A little humor went a long way. Don’t think they much of a sense of humor in Boulder.

Welcome to Boulder. The Oppressed Republic.

Yea that sentence is pretty light really. A lot of trails are closed to MTB just because of user conflicts- if its an area closed because of wildlife habitat issues it’s a bigger deal and probably closed to all users. Here in Alaska its not uncommon to run across areas like this at different times of the year.
I too have accidentally ended up on trails I was not supposed to be on, and Im sure it will happen again. Most common is out exploring trails only to turn onto a new one and follow it out only to find a ‘No Bikes’ sign at the trailhead- D’oh!

As far as the Eagles go, mtb isn’t really a danger to them but bike traffic through the woods near where they nest scares off the smaller wildlife they would hunt. Necessitating that they go farther for food thus leaving their nest and chicks for longer periods of time. I usually find these areas are only closed during certain periods of the year for raising young but am not sure if that was the case here or not. I wonder if the area in question was adequately signed and marked ‘closed’?

Yeah,the peoples republic of boulder,hahahaha.I got on a wrong trail once in town and didnt see the no bike sign till it was too late and this dude about crusified me with his eye’s for riding on his boulder walk path,it was actually kinda unsettling at the time.Dont know about boulder somtimes but I like the trails and mountains up there for sure.

Yeah, I think it would come down to the signage. If there was adequate signage, then fine, he shouldn’t have been out there. But if it wasn’t signed clearly, cut him some slack!

Ya know, this really wouldn’t be a problem if Mr. West would stop getting so much air and hitting the eagles mid flight. Please Mr. West, for all of us, please keep your bike closer to the ground.

SARCASM FOR THE WIN

+1 for: “the desire to explore new trails, experiencing natural beauty from the seat of a bike, and also the need to get involved in advocacy groups like IMBA.”

the thing is now that the Bin Laden hunt is over the authorities can now focus on the important issues in America like illegal downloading of mp3’s and illegal trail riding. It’s not like we have to worry about any real crimes anymore.

You’d have to consider several things: one, was the area clearly marked, was there actually a reason to close it to cycling, and was there an alternative area for cyclists to ride nearby? One can also ask was it legally closed or did some guy just make up a rule and post signs with no legislative authority, as has happened with county gov’t in certain NJ locales, where people have posted “no bike signs” and everything, and it took OPRArequests for bikers to realize there was never any ordinance or law banning them, the whole thing was concocted by unelected employees.

Don’t get me wrong, I want to protect eagles, but so much anti-biking crap is flat out stupid, elitist, and some of it is even illegal (like those not legally authorized signs). Let’s hold the gov’t to a higher standard than some fool bully and demand they prove a case.

Oh and not for nothing, if you consider riding a “illegal” or “closed” trail the equivolent of a vehicle infraction, how many drivers — even those that endanger people — do jail time for a traffic offense? Never mind it was commuted or whatever, that’s the sentence. So if you wanna make a comparison to something like running a stopsign which could actually kill someone (even tho what this mtb’er did physicially endangered no one) how about the same penalty as that? Which is, what, a small fine?

Or is anyone gonna argue that maybe scaring a bird is worse than killing a family of four with a car?