You know about Fruita, right?

Even if you haven’t ridden there, surely you’ve read a little or heard from others about what a great mountain bike destination it is (it happens to be one of my personal favorites).

But here’s the thing about Fruita — or its awesome mountain biking neighbor, Grand Junction, for that matter. They can be hot. Like frying an egg on the sidewalk kind of hot. And neither place has a lift to carry you and your heavy bike up the hill so you can bomb back down.

Located on the Grand Mesa, Powderhorn is about an hour-and-a-half from Fruita, and is much cooler temperature-wise. The base of the ski resort lies 3,700 vertical feet above Fruita, and the summit another 1,650 feet above that–a peak elevation of 9,850ft. It also has a burgeoning mountain bike scene that you just might learn to love… or at least like a whole lot.

Here’s why: They have honest-to-goodness fun trails. Not a ton really, at least by the standards set by so many of Colorado’s big mountain names, but still, Powderhorn is working on it and is getting the job done.

“Once people get here,” says Ryan Robinson, marketing and sales manager at Powderhorn, “they have a really good time.” 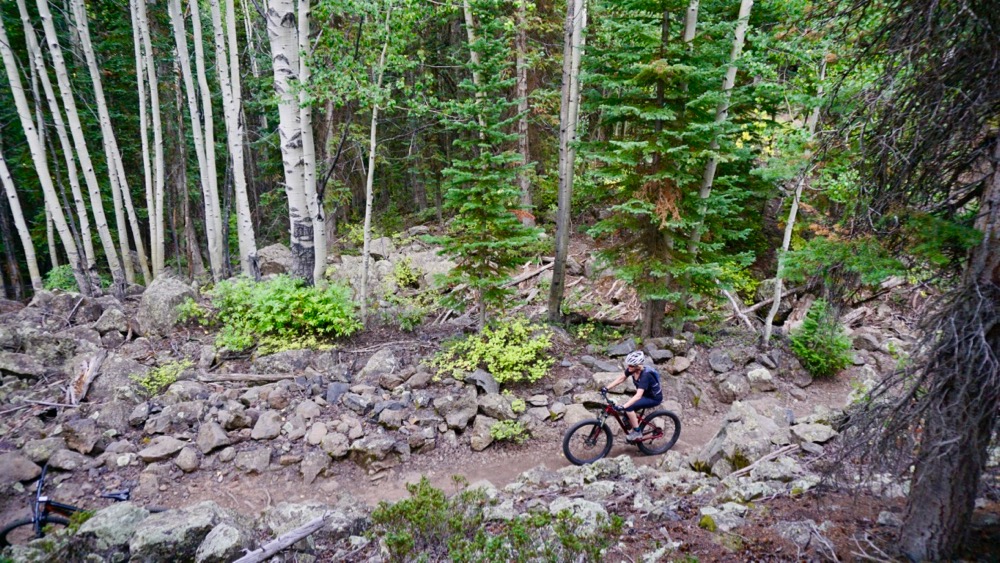 Nearby singletrack rings the Mesa, where you can ride through aspen and fir groves, dance around lava rock, and flow across ridge lines that open to views of the valley below. I rode a short section of the West Bench Trail and really enjoyed it. It wasn’t much; however, one of the ski patrollers, Steve, told me you can loop a number of trails together and end up with a ride that would cover 20+ miles and take you a few hours to complete.

When you’ve had your fill of pedaling, Powderhorn will help you explore the special allure of gravity (by the way, it’s not just a good idea, it’s the law).

A Blue Run Kind of Day

In case you’re wondering, Powderhorn – which is owned by a couple of guys who seem to really love mountain bikes – has only been running their lifts for mountain bikes for a couple of years. Still, they’re not wasting any time. By the time you read this, their newest downhill trail, a fast green run called Mutton Buster, should be open. Even if you’re into flying high and tossing tail whips, you’ll love the high-speed flow of this trail. All told it will be two miles long. And here’s a little secret: there are places on Mutton Buster to fling yourself into the wind.

They also have the service road, called Stagecoach, designated as a green run. It’s mostly smooth and made up of dirt and gravel, twisting down the mountain in a series of switchbacks for roughly four miles. It’s okay, but you’ll definitely enjoy Mutton Buster more.

Their intermediate run, called Blue Ribbon, shoots about two-and-a-half miles down, dropping over 1,600 feet from top to bottom.

If you can handle it, this trail will let you hit the afterburners and grab chunks of air big enough in a couple of spots to have onlookers staring straight into your bottom bracket. Along the way there are plenty of smaller jumps you can pop, berms that float in and out of the aspens, rock sections that will rattle your brain, dips through ravines, and high speed open areas shooting across flower-specked meadows.

I love Blue Ribbon, which you can easily ride on a shorter travel bike like mine… as long as you keep your speed in check. It was designed to give you a challenge and keep you smiling top to bottom, regardless of your skill. Dial your speed to your ability, and this run is worth repeating over and over, even if you’re accustomed to streaking through the woods like a ballistic missile.

Want to Get Rowdier?

Let’s say you want something a little spicier. The appropriately-named Pinball Alley will send you careening down the mountain across beefy (and I mean beefy) rock sections, into steep twists through the trees, around fast berms and, if you are so inclined, sailing through the air. On the lower end it flows like a rail right back to where you started.

While it’s shorter than Blue Ribbon – clocking in at close to two miles with about 1,200 feet of descending – you’ll have your work cut out for you when riding it. Expect some significant arm pump and more than a few places that will have you clenching… if you know what I mean.

Okay, time to be honest here. I already mentioned that Powderhorn doesn’t have tons of miles of trail, and only three legit downhill runs. And, truth is, there isn’t much happening in and around Powderhorn. It sits lonely, like a quiet sentinel forged into the base and hillsides of the mesa. The surrounding towns are few in population and far between. But that also means you’re far away from the typical ski town madness.

This is part of the allure, if you ask me. I’d rather go ride my bike and enjoy my time outdoors instead of fighting with huge crowds, or getting jammed up on trails choked with thousands of visitors. And most weekends, so I was told, you’ll find people camping in the parking lots at Powderhorn and sharing good times after they’ve finished riding for the day.

You want chaos, high prices, and attitude? Go somewhere else. Powderhorn is here to serve and help you relax while you do the dirt.

That means everyone – and I mean everyone – is nice. From the lady in Mesa who’ll grab you an IPA from behind the bar at Blink to the dust-covered cowboy sitting on the stool next to you. Or the folks operating the ski lift at the resort, the other riders young and old, the resort staff and owners… literally everyone in and around Powderhorn that we met were good, friendly people.

Of course, that’s not the main reason you come here, but it doesn’t hurt. It also doesn’t hurt that you’ll find some riding you’re guaranteed to enjoy.

“We think this is the final piece of the biking puzzle in the Grand Valley,” concludes Ryan.

When you’re ready for some downhill runs or a little less heat on your cross country ride, make your way to Powderhorn. It’s a small place with a big heart for mountain biking. And while there isn’t a ton of trail there yet, it’s still a fun place to ride. If you blink once or twice, you might find that they’ve cranked out more trail while your eyes were closed–and then invited you, all polite and friendly-like, to join them for some good times.

Powderhorn is open for bikes from late June to early October. Lifts run only on the weekends, from 11am to 4pm. That does not mean you can’t go during the week… only that you’ll be riding up before coming back down.

Lift tickets are $25 per day or $45 for the entire weekend. They have some nice Scott bikes available for rent, which cost $69 per day, including all the protective gear you need. They also have some smoking-hot package deals, specifically the popular $49 package, which includes a two-hour clinic, full-day lift ticket, bike rental, and protective gear. Also keep your eyes peeled for their annual race series, which includes a number of events during the season. 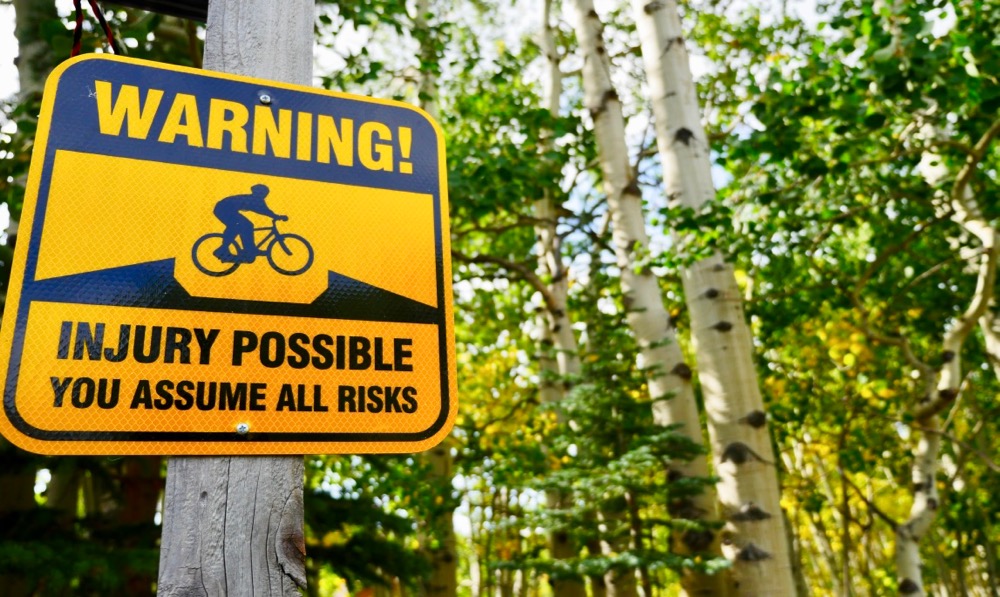