What is it that makes a ride memorable? Is it the scenery? The difficulty? The novelty? The location? The amount of travel it took to reach that trail? The people that you shared the ride with?

I think that all of these can be factors that make a ride memorable. This year, I (Greg) asked our editorial team to share with you their single most memorable ride from 2015–and narrowing it down to just one was no mean feat! Below, you’ll find memorable rides that embody all of the qualities mentioned above. Each ride is memorable to the one who took it for different reasons, but they all made for our best experiences of the past 12 months! 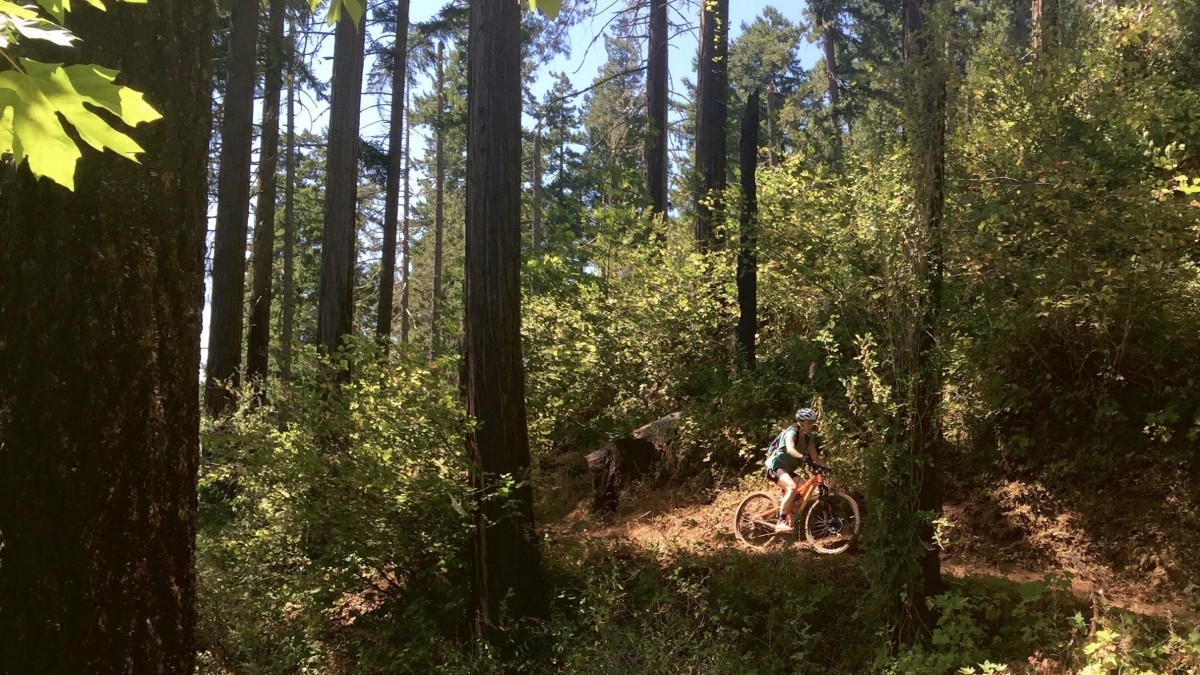 My most memorable ride of the year wasn’t the longest or toughest, at least for me. For my girlfriend Susan, though, those criteria were met. During a week-long tour of Oregon this summer, we spent a day in Oakridge riding the Alpine Trail. Its reputation precedes it, and with good reason. The trail is fun, fast, and the views are amazing. We rented a pair of Santa Cruz 5010s from the Willamette Mountain Mercantile and jumped on the shuttle from Oregon Adventures.

Susan had just recently gotten back into riding after a several year hiatus. In fact, we had built up a Salsa El Mariachi for her birthday only a few weeks before the trip. She got in a handful of rides, but nothing like the Alpine Trail. By the time we finished the 22-mile ride, she had more than doubled her longest ride. I know it was tough for her, but I was so proud that she pushed through and finished. The look on her face at the end–a mix of elation and exhaustion–said it all. As a proper end to an epic ride, we finished it off with giant burgers and beers from the Brewers Union. 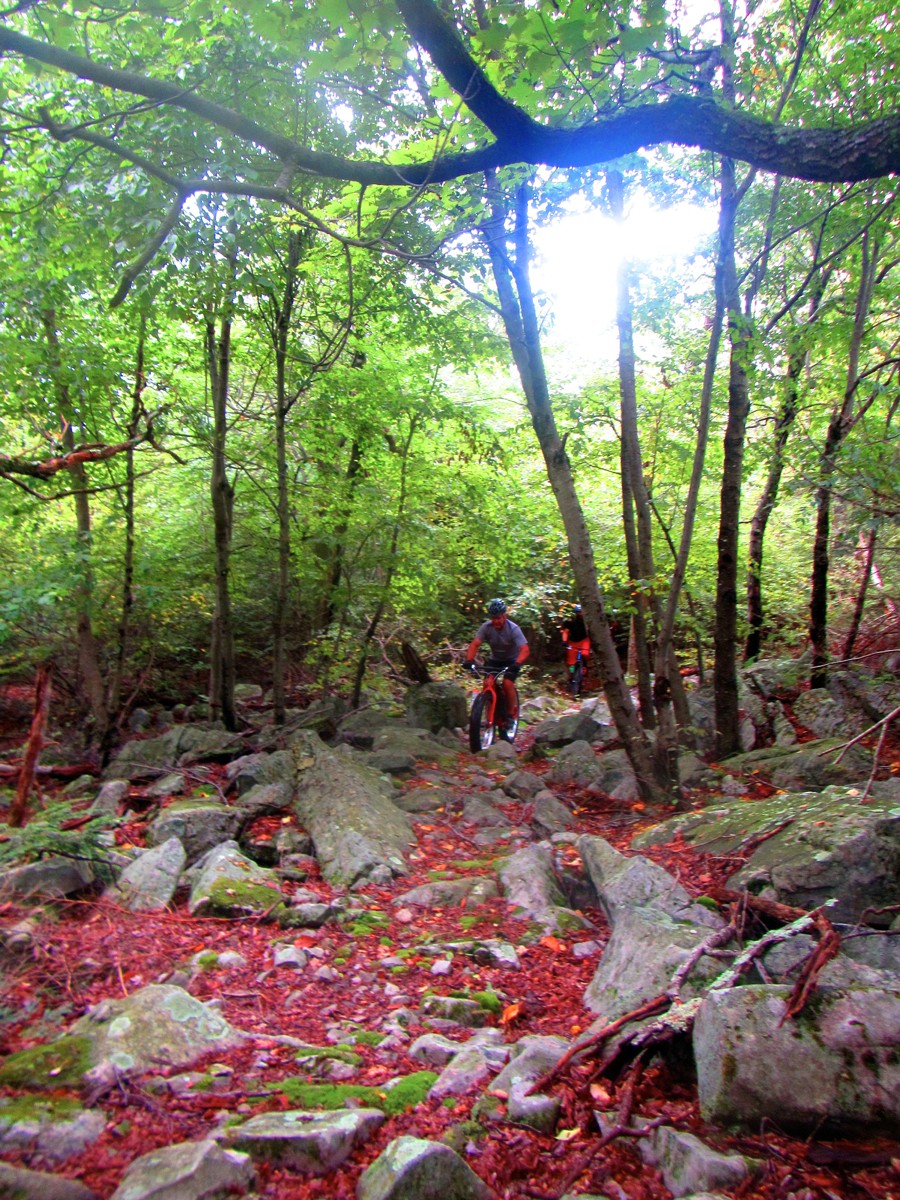 Many of my favorite rides are those in which I explore new places. Often, they are fairly long and difficult, and involve some hike-a-bike. In September, a group of friends and I explored some new territory in Bald Eagle State Forest, Pennsylvania. The ride began with a hike-a-bike up a mossy, rocky gorge, and then followed it up with a grueling grind up a narrow dirt road to the top of the ridge. We then jumped on High Top Trail, which followed the ridgetop for 10 miles before we dropped back down and followed a road back to the car.

We had absolutely no idea what to expect from this trail. We discovered a beautiful stretch of very rocky and technical singletrack that was overgrown in spots, but was still a blast to ride. Gnarly rock gardens tested our balance and technical skills, and there were a few sections that were nearly unrideable. But it was a really fun challenge, and there were also sections of smooth, pine-needle-covered trail that gave us a break from the hard stuff. I’m looking forward to returning to do this loop now that the leaves are off the trees to enjoy some incredible views! 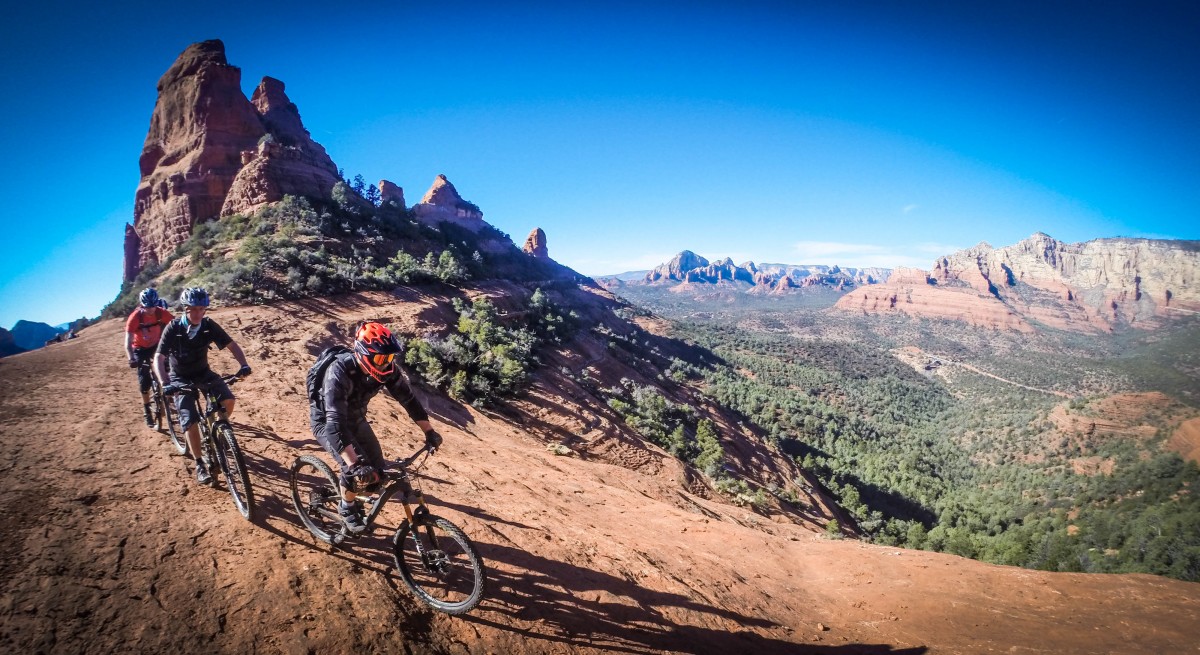 This year I was able to ride several challenging, epic trails and backcountry adventures (Canyon Creek, The Whole Enchilada, and Pikes Peak, to name a few), but undoubtedly the most memorable mountain bike experience was a long weekend in Arizona in January. Our local trails in Colorado had been buried in snow or mud for weeks, and on the heels of turning 40, I convinced three close friends to help me seek out the grippy rocks and dry winter dirt of Sedona. There are hundreds of miles in this singletrack mecca, and we rode as many as we could, but anyone who has ridden Sedona would agree that the crown jewel is embodied by what is known as the three H’s: Hiline, Hangover, and the Hogs. Each of these trails have unique qualities that help you remember why you loved them so much (scenery, technical ability, flow), but the Hangover trail was absolutely unforgettable.

After a brisk 4wd road climb, the trail turns into slickrock bliss as it meanders up to a breathtaking overlook, but not before skirting past seemingly-impossible off camber passes and harrowing drops marked only by cairns. From here, you can see into the infinite desert, interrupted by red-sculpted rock formations and hoodoos casting deep green and grey shadows. It is here that one of the most interesting descents begins, dropping into a bowl that then tapers into a narrow trail–inches wide at times–towering hundreds of feet above the ground below. The trail snakes around rock and tree, undulating high above the valley floor. The Hangover, aptly named, then evolves into steep, technical rock maneuvers as it passes back and forth over a bloated red rock belly before ending in a ripping descent through pinions and cacti. No one could forget this ride; there is nothing else like it on the planet, and the reason you should head to Sedona this winter when you are ready to give Old Man Winter the finger.

No offense to the backcountry epics, day-long shuttlefests, and my yearly mancation, but the Highlander Games Mini Enduro took the cake as my most memorable ride in 2015. And the fresh duff atop tight singletrack intertwining thicket and spilling racers down the hillside through steep, rocky pitches, over gap jumps, and step-ups only made up a fraction of the fun. Each stage transition consisted of a Highland-heavy event including the caber toss (lofting a long pine pole end over end while trying to approximate its landing in the 12 o’clock position), the stone put (the Scottish version of the modern day shot put), and archery (not technically a Highland event, but none of us were technically Highlanders either). And all this prior to climbing to the subsequent stage.

Perhaps more importantly, and the aspect making this ride my most memorable was supporting the one man and his family who owns the land, single-handedly built the trails, organized this event, and brought a handful of like-minded clansmen (and women) together.

Summiting a 14er on my mountain bike–and specifically, 14,269-foot Mount Antero–had been a goal of mine for years. Finally, late this fall, my friend Ben and I set out to tackle this epic endeavor. With almost 5,000 feet of climbing and over 6,000 feet of descending over the course of 20 miles, complete with a top-of-the-world view off the summit, this Mount Antero ride was one of my most memorable mountain bike experiences–not only of 2015, but of all time.

There’s nothing like poking around unexplored trails, getting lost, exploring until curfew threatens, getting found again, and then finishing by descending 3,000 verts, passing through multiple life zones, from ponderosa-filled cool high mountains to scorching low desert. Hooking up with Xen MTB, Miniskibum and I explored seldom-seen trails in the mountains east of San Diego, first in the very crisp March morning, and felt the sun’s rays loosen up as the day progressed, while our guide taught us about local flora, fauna, and showed us the remnants of ancient Native American activity. After burning more time than planned in our explorations, it was time to drop to the valley floor on a crazy variety of continuously-descending singletrack, punctuated by stops to reride gnarly sections and session launching off the various huckables along the way. In the end it was a little more time, adventure… and fun than we bargained for. It was exactly the kind of day that makes for a marvelously memorable ride.

I lived at the base of Pikes Peak for four years but never dreamed I would ride my bike down the massive 14,000-foot peak. 11 years after leaving Colorado Springs, that’s exactly what I did.

The trail down Pikes Peak is unlike any other shuttle or lift-assisted route I have ever ridden, with over 7,000 feet of constant descending through six distinct ecological life zones. Sure, I’ve probably notched more verts in a single day riding at a resort, but there’s something special about starting way above tree line in the alpine tundra and finishing in the prairie. I didn’t even come close to cleaning every line on the Barr trail that day, which is why I can’t wait to go back and try it again. And again, and again, and again. 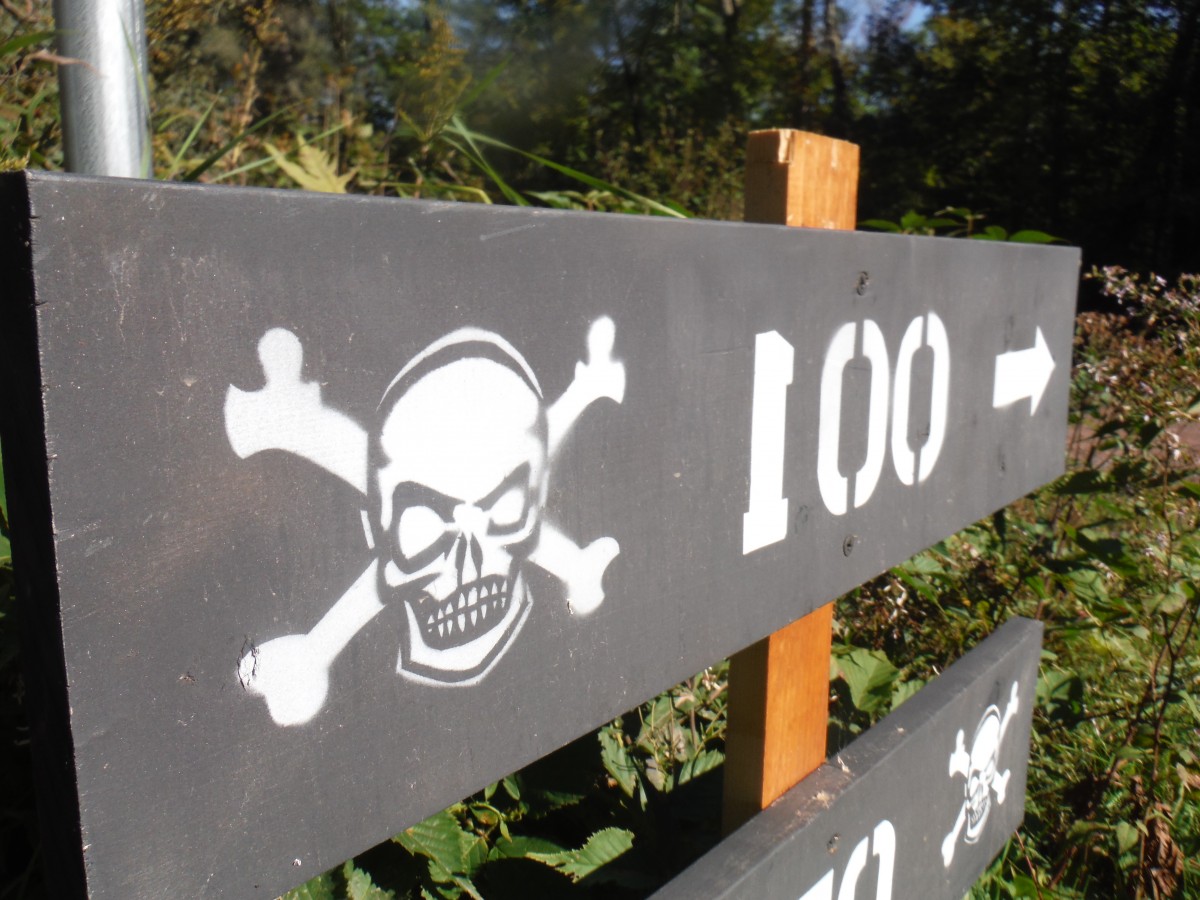 A week after my friend Chris got his Salsa Bucksaw stolen, he put on the second annual Skull-N-Bones Gravel Challenge. Putting on a bike race is a significant challenge all by itself, but the task can be downright debilitating when you’ve got the cloud of a stolen bicycle hanging over you. Chris was up to the challenge, however. My crew of intrepid riders showed up the night before and camped with a bottle of Smirnoff that didn’t make it through the night. In the morning, nobody was all that interested in tackling the 100-mile course (which was fine by me). I ended up doing the 50 miler, which left plenty of time in the evening for beers and white Russians. Chris didn’t ride–I think he’d sold all his other bicycles to pay for his Bucksaw–but he hung out at the finish line and congratulated every rider who came trickling in. Chris said the day helped lift the weight of the theft off his shoulders. Events befall us and we’re often helpless to do anything to right the situation. Cycling makes those moments bearable.

Your Turn: What was YOUR most memorable ride of 2015?

Great article! It doesn’t always have to be about typical biking benchmarks like distance or elevation, it doesn’t even need to be all singletrack (gasp!).
One of my most memorable was biking was riding the Mana Road trail on the Big Island of Hawaii. Starting at ~9000ft (2800m) above sea level you scream down a paved road, tucked in and hitting just over 50mi/h (80km/h) you have to slam on the brakes and head down a mainly doubletrack “road” around the mountain. While a lot of it wasn’t the singletrack we all crave, the trail takes you through all sorts of landscapes and rapidly changing weather from bright sun, heavy rain, and riding through clouds. You descend a lot, climb a little until you end up in Waimea ~50mi (80km) later where there is cool bike store (that let me hide from the torrential rain) conveniently located beside a brewpub.