Editor’s Note: The opinions expressed in this commentary are Chris Daniels’s alone and do not necessarily represent the opinions of Singletracks.com.

Enough whining already! Stop berating politicians and land managers for avoiding a fair public process, an absence of bipartisanship, unilateral decisions, dismissing scientific data leading to blind edicts preventing, prohibiting, and pilfering our trails under pretenses that mountain biking harms the environment more than other forms of trail use until…

…we put ourselves under the microscope.

The issue isn’t whether or not mountain biking degrades a trail or impacts the environment in some harmful way, but to what extent it does and how much control YOU have over it. While the impacts of off-road biking have been shown to be equal to (and according to some research, less than) hiking, it is dually important to develop and encourage a certain self-awareness to identify, break, and prevent poor but avoidable riding behaviors to mitigate environmental damage.

The International Mountain Bicycling Association (IMBA) has identified 6 avoidable forms of harmful environmental impacts caused by all types of trail use:

The following party fouls are real-trail examples of how poor technique, ignorance, and plain laziness can degrade trail quality and extend damage to the surrounding environment, along with some solutions. These cases also happen to be what anti-off-road extremists will include in their armamentarium to shut us down.

Your bike and clothing can carry and transplant unwanted, invasive, non-native plant seeds, which may compete and displace naturally-occurring vegetation. Between rides, wash you, your clothes, and your bike, you filthy animal!

…unless they’re made for it. Coming in hot through a corner without bank or berm will force you into a brake-mashing skid, causing trail widening and harm to bordering vegetation. I used to think if enough people came skidding through a fast corner, a berm would naturally form–but unless a berm is properly built, a naturally-occurring one prevents proper drainage and is only displaced soil, which is difficult to supplant. Get with your local trail building and maintenance crew and advocate for the construction of an appropriately-built berm or other means of lessening the impact while providing enjoyment.

It’s one thing to find yourself in mud, but it’s another to consciously make the decision to ride in known muddy conditions. Trampling muddy trails renders them less usable and very costly to fix after they dry. Trails suffer from widening, vegetation loss, and erosion as riders deviate from the intended path to less muddy ground. A muddy trail is less cohesive, fragile, and sick (not in the “sick drop, bro” way, but the coughing/sneezing kind). Don’t ride in the mud! 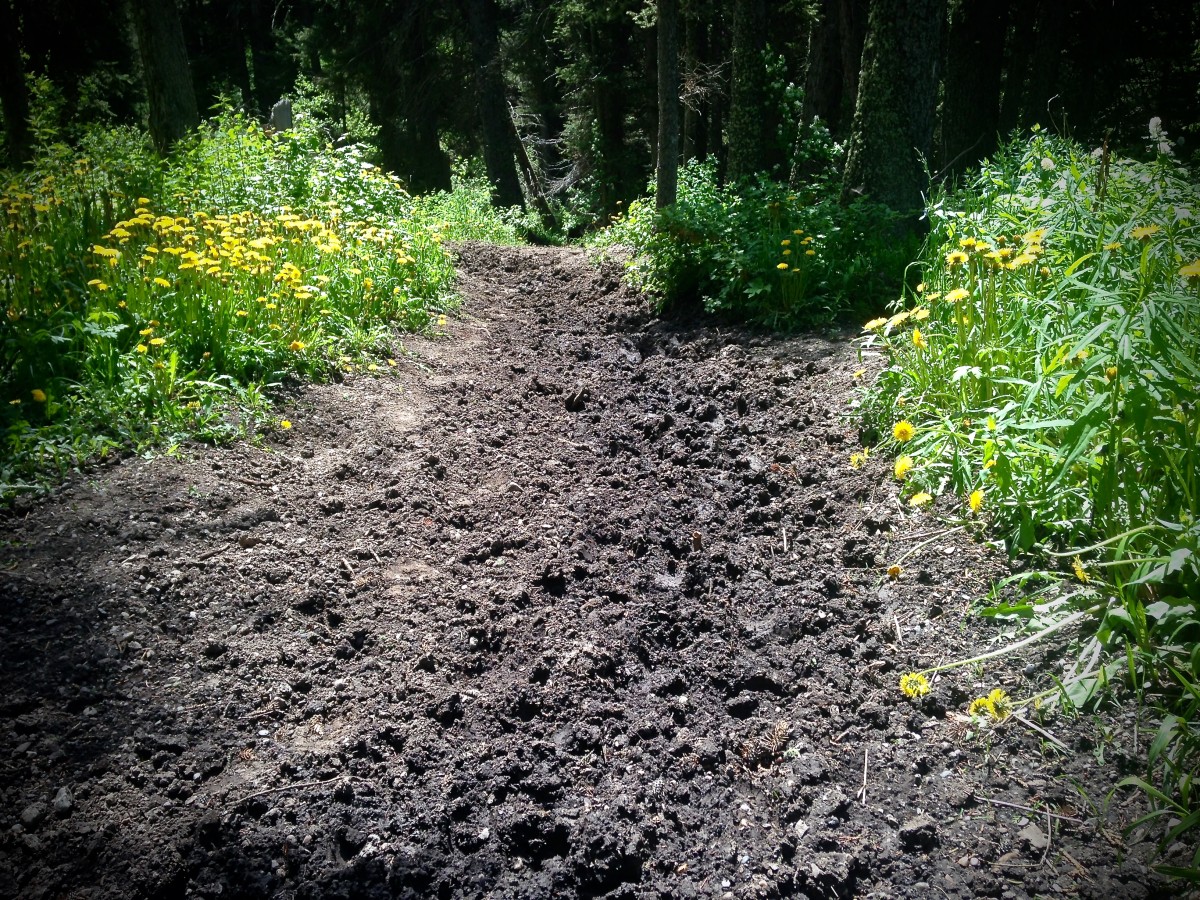 A fall line, as it relates to mountain biking or skiing, is a natural downward course, the steepest possible line on a given descent, the least sustainable type of trail in existence, and not fun to ride anyway. By their vary nature, fall lines suffer from ever-present erosive damage that is greatly compounded from soil displacement and trail widening when trampled by users. The International Mountain Bicycling Association advises that a trail’s steepness should not exceed half the grade of the hillside nor an overall 10% grade. Studies have also shown erosion rates are significantly increased on trails with grades greater than 16 percent.

Besides being unbelievably lazy, shortcutting a switchback (or any other trail segment) is harmful to Momma Nature. Shortcutting trail not only damages vegetation from trample, but creates a fall line inviting erosion to further harm vegetation and damage the lower trail section from whence you cut.

Ok I know, this is obvious. I doubt any of our readers are intentionally trashing our trails and when we do drop some debris, it’s probably by accident. So for this one, let’s go beyond the “not doing” and actually “do” something about it. Pick it up, even if it’s not yours. You may have to give up a KOM/QOM or come to a complete halt during a mid-mountain bomb, but we should develop the habit of picking up (some) stuff along the way. In Boy Scouts they taught us to “Leave No Trace,” but may I suggest we strive to leave our trails better than we found them.

Just this year an entire bike event was cancelled going forward due to trail trashing. As of June 2015, bikepackers will no longer enjoy the Oregon Outback due to the garbage, feces, and unburied toilet paper left along the route including crap (literally) in barns and land made especially available to riders by private land owners at the time. The small town of Silver Lake, OR even decided to ban camping altogether in the city park due to a similar shit show during the same event. Fellow riders, littering your trail will kill your trail in more ways than you know!

Harness the skill or get off the hill (or just get off the bike for a second). Don’t ride muddy trails, but be prepared to get a little dirty. And if you do, clean it up before the next ride. Stay in touch and work with your local trail crew to enhance and take care of your trails. And for hell’s sake, stop pooping on Mother Nature (or at least bury that…).

Your Turn: Do you know of any additional ways we can ease the impact of mountain biking on the environment? Share them in the comments section below!

Awesome article Chris! I’ve definitely been guilty of a few of these things myself in the past… always good to have a reminder on how to use the trails responsibly!

The skidding on purpose drives me crazy. Unfortunately, berm-blasting has become the go-to shot for MTB ads and videos. Many times those berms are built specifically for that shot, or they add a bunch of duff to an existing berm to get that SICK! roost. And, if done correctly, those riders aren’t locking up their rear wheel to get that spray. They’re using a lot of speed and a lot of skill.

I tend to see it from newer or younger riders and it’s a bad habit.

I’m guessing the author doesn’t approve of the riding style displayed in movie, “Where The Trail Ends” (available on Netflix). Some incredible talent and guts, but I wondered, too, about the destruction of natural landscapes from the fall-line riding. I welcome any comment on that vid.

On the other hand, as an aging tree hugger/intermediate singletrack rider/avid through hiker (age 50+) I’m of increased belief in the resilience of the natural landscape, and that bikes do significantly less damage to trails and the environment than do pack horses and mules. I appreciate the tips to be a better, more conscientious rider – but c’mon guys – don’t be afraid to enjoy the ride. This ol’ beautiful earth is going to outlive us all 😉

Fairly major one that IMBA mentions alongside the 10% rule: don’t ride through water/river crossings. Bad trail design begets bad riding. Also, it’s worth saying that you should only be riding trails that are being managed and maintained.

A few of these things are just bad habits, but others can be ameliorated by simply joining a trail-club. There you’ll learn the basics of good trail etiquette, but more importantly, you’ll be part of a solution that will lead to there being fewer problems with trail surface enroute to begin with (trail-maintenance days rock!).

My pet peeve with riders is that so few wish to pitch in, even a single afternoon per year, to help with trail maintenance.

Final thought; ask before you dig a new trail. This is bog-simple respect for your fellow man / woman.

We’re all stewards of our trails and maintaining them is an easy task. I carry a collapsible saw in my pack and in the windy rainy season a set of clippers. If it hit you in the head while riding or you had to get off and lift your bike over it get off and give your arms a work-out. Trim that low hanging branch, blackberry bush or stinging nettle. If you remove the fallen tree just think how you won’t have to stop at that spot again. If you’re riding in a group using a branch as a lever and 4 strong backs you can move almost any obstacle. We can all be like a moving trail crew while cross training. It tends to silence the whining hiker or disgruntled
equestrian when they meet us on the trail while we’re fixing it for everyone.

Great article and it’s a shame that folks have such a problem with doing things correctly. I haul out as much trash I can fit in my out pack pocket every ride I make. Surprising the number of riders/hikers that find water bottles too heavy to carry out after they have drain the water from them.

All good points that apply to hikers as well. Outside of horsey damage, I find the popular hiking trails have the most evidence of this kind of bad behavior.

You say don’t ride in the mud and in the same article you say ride through the mud puddles ? You can’t have it both ways.

Obstacles? If a rider can’t do the obstacle I would not recommend trying it and ending up with a trip to the emergency room.

Don’t bring mud and seeds home with you ? Is this hobby called mountain biking?

And yes please haul all trash out with you. Do not leave it on the trail.

Some of you act like the trails are on your very own property. That’s most often not the case. It’s just as much the other person’s trail as it is yours.

Thanks for the tips. Too bad people can’t naturally do this. Even with classes and articles some people still tend to do the wrong thing.

good article but I’m a landowner that borders a proposed mountain bike course on what is now a nature preserve. I dislike the idea of loosing the nature preserve and, while the author has very good suggestions, I see fewer and fewer people really inclined to follow anything but their own interests and everything else be damned.

Sorry to bump this thread, but it’s been Jan 2016 since this has been updated. What has happened between then and now? There has been a rise in MTB of two very distinctive groups of bikes: Enduro and E-Bikes. I wonder what the author would think of those bikes and the potential for trail damage they cause! I’ve heard there are some jerk E-Bikers out there but have personally not seen them riding like that…yet. Enduro, totally different story.

There is an Enduro/DH specific trail system about 25 min from me, I go there once in a while just to ride up and back down. A lot of the side trails are so abused and eroded I don’t even bother. It’s not fun to ride a V-shaped ravine instead of a trail. Going back down lately has been pretty blown out as well. Hopefully it will get cleaned up. But…that is their domain, if they thrash it, they either live with it or they fix it up. It’s their area to ride as they wish, I give them that. It’s when they bring a bro group to other areas and trash those trail systems, and then leave and don’t come back for a while…that’s what is irritating.

So really, whatever trail damage around the nation happened before 2016 is probably nothing compared to what many bikes and riders are doing in 2022: using capable, stable, fast, big bikes often with 2.6 or even plus tires that are able to literally shred a trail. Power, electric or not, is addictive…use it wisely.