Building the profile of a mountain bike destination is a nebulous art form. Movers and shakers in towns who want to capitalize on mountain bike tourism are desperate for insights into how to build the profile of their community, yet ask locals in places like Whistler, Moab, or Crested Butte for advice, and they’ll just shrug their shoulders at you.

Those three destinations have always been mountain biking hotspots. But sometimes it seems that towns burst into the limelight as brand-new, untried destinations. Yet in reality, it’s never as sudden as it appears on the outside–the locals have often been working for decades behind the scenes, sculpting sick slices of singletrack pie.

One such destination that has rocketed to prominence in the past two years is Northwest Arkansas. Part of this perception is due to their application and selection into IMBA’s Ride Center program, and then the selection as the location of IMBA’s World Summit in November, 2016. Photos, videos, and articles have poured out of Northwest Arkansas, singing the praises of astonishingly good trails surrounding Walmart’s headquarters.

The rise of Northwest Arkansas is certifiably meteoric: they’ve built 52 miles of mountain bike trails in 2016 alone, bringing their claimed total up to at least 210 miles, and have another 100 miles of trails set for construction over the next 18 months.

Naturally, I had to travel there to check it out for myself.

As my friends, Nathan and Steven, and I rolled out from our Airbnb rental, we navigated our way toward a paved bike path that leaves the urban core of Bentonville and heads north through the city. According to our app-based map, all along this bike path were singletrack trails splitting off, left and right and left again. While we didn’t have a route or much of a plan other than to eventually to arrive at Slaughter Pen, we just decided to pedal north and pick up as much singletrack as possible along the way.

It didn’t take us long to swerve off the pavement and onto dirt, grabbing a beginner trail filled with mellow progression features, like rolling bridges, low log skinnies, and rock obstacles. That trail flowed into what was essentially a mini bike park, with one climbing trail and three or four short descents of varying difficulties, filled with tabletop jumps, massive berms, and one descent where we literally were on a berm turning either one direction or the other the entire time!

Eventually we picked up a trail that had a more old school feel, with classic benchcut singletrack, sharp limestone rocks… and yet, even on this older trail, we stumbled upon some big ladder drops, teeter totters, and skinny rollers hidden out of sight in the woods.

Eventually we linked up singletrack all the way to Slaughter Pen, our main destination. Here, a full-blown bike park with massive tables, berms, and a three-tiered ladder drop feature beckons riders to challenge their skills and wrack their bodies. But not all the features were burly–a mellow pumptrack was filled with toddlers on striders.

The bike park could only keep us entertained for so long, and then it was back onto the singletrack that traversed the wooded ridge above the park. Hidden back in the trees we discovered a “downhill trail,” aka the longest descent in the area filled with big berms, massive tables, and a couple of near-vertical wall rides–a flow trail in the true sense of the word.

At that point it was about lunchtime, so we had a decision to make. If we kept going north, there was even more singletrack along the greenway, and eventually we’d connect to Blowing Springs and Back 40. However, Back 40 is a 30-mile loop in its own right, so I planned to turn that into a ride unto itself the next day. Steven also had flatted once and needed to buy a tube, so we decided to pedal back south toward downtown, picking up stretches of trail that we had missed on the way up. We rolled into downtown, stopping at Phat Tire Bike Shop for a tube and to ogle the bikes. But I was hungry, so we breezed through the shop and pedaled our way over to Chick-fil-A–my hands-down favorite thing about the South! 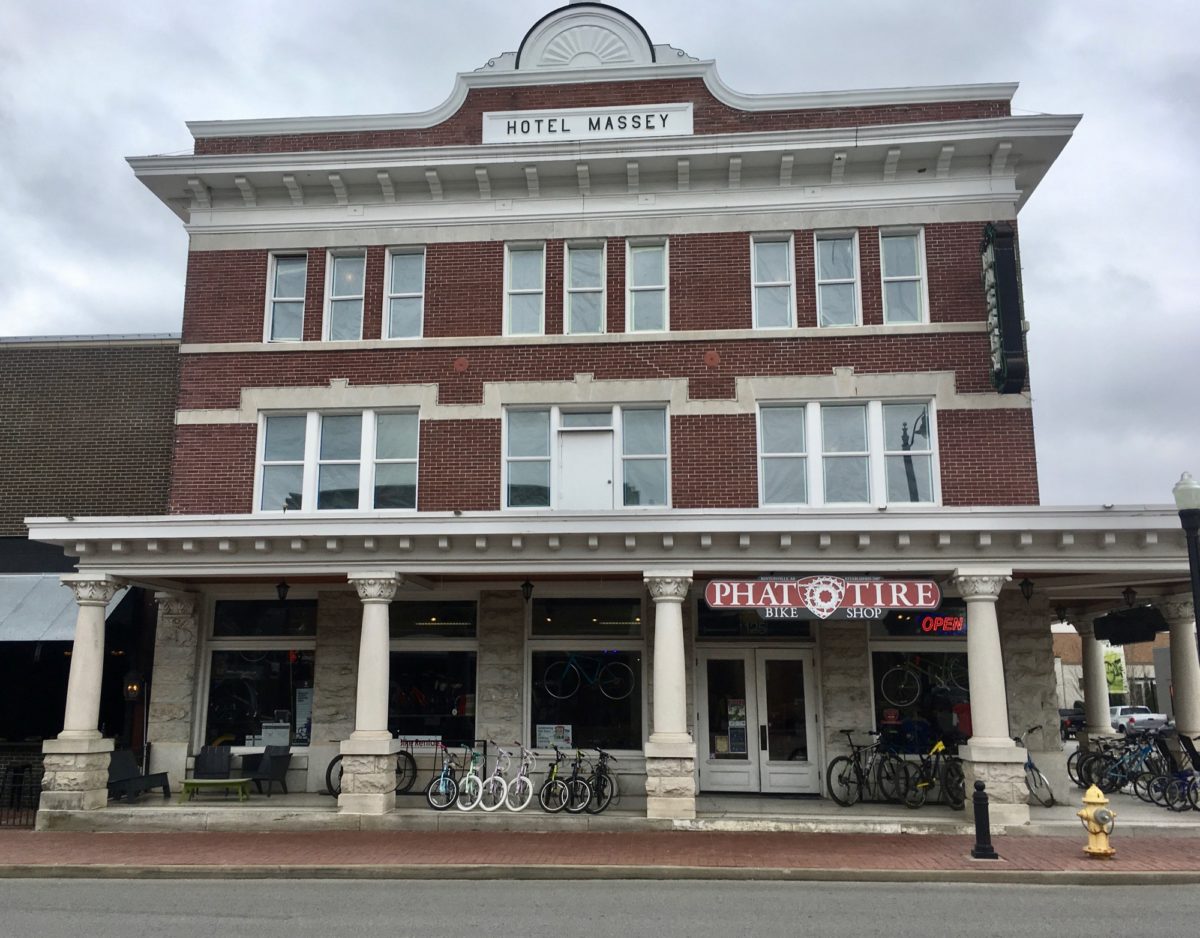 Bellies full of fried chicken, we pedaled over to a park named Coler. I’d heard from local contacts that this trail system was still under construction, but that we just had to check it out.

Despite not being fully built out, this tip turned out to be one of the best bits of advice of the trip. The core of Coler’s network is essentially a hub on top of a hill. You’ll find one or two good trails for climbing up the hill, but the fun starts once you reach the top. Radiating from this hub are no less than a half-dozen different downhill trails of varying difficulties–from green, to blue flow trails, to red/black flow/jump lines, and finally what’s labeled as a double black diamond downhill trail: “Rock Solid.”

We sessioned as many lines as we had legs for and discovered impeccable trail building. The flow and jump lines were superbly dialed–as we had found off of the main greenway–and the double-black diamond Rock Solid was certifiably gnarly. While Nathan and I were able to make it down the chunky rock gardens, berms, and table tops on Rock Solid in once piece, we also bypassed the massive doubles and rock-lipped kickers up high.

By the end of the day we’d pedaled about 35 miles… and this was only one of three days of riding we did. Over the course of those three days, we were only able to sample a few of the gems of this region, with so much left unexplored.

Around every bermed corner and wooden wall ride in Bentonville, I was astounded by the high quality of the trail building, and the care that went into even seemingly-simple details. Where volunteer trail builders might have just hacked in a switchback, the pro builders contracted here in Arkansas constructed features like the massive rock-stacked berm on Rock Solid.

If there’s one thing I’ve learned about trail building over the years, it’s that trails of this caliber are achievable and can be built almost anywhere–if only you have the money to pay for them.

Rumor had it that Walmart and the Walton family were the primary funders of the trail system in Northwest Arkansas, so I got in touch with the Walton foundation to learn more.

The Walton Foundation has a Home Region Program, which has the stated goal of “improving quality of life for businesses and residents, and [attracting and retaining] employees at all different levels,” according to Karen Minkel, Home Region Program Director. To that end, the Home Region Program invests between $40 and $50 million every year into this two-county region in Northwest Arkansas, and the Arkansas Mississippi Delta.

The fact that the Walton Foundation chose to invest in mountain bike trails is, in itself, an interesting decision. Why exactly did they choose to invest in singletrack? The Foundation and the Walton family looked at the area and asked themselves, “‘what are the assets that we have in the region, and how can we leverage those?’ One of the things people say repeatedly is how much they love the access to the outdoors and the access to nature,” said Minkel. “I think there were two purposes in investing in singletrack trails. One was, really being able to protect our natural assets and provide access to them. So it’s part of an overall green space preservation strategy as well.

“And then secondly, I think it really takes advantage of this opportunity to connect the urban areas with the natural areas,” she continued. “I think that’s a unique feature, where you can hop on a bike downtown and then get out onto a natural surface trail within minutes, and feel as though you are immersed in the woods even though you’re just a five-minute ride away from the downtown core.”

Minkel thinks that this strategy of investing in trails will be very successful in achieving their mission of attracting talented professionals to the area. She said, “I do think it’s going to draw in a lot of millennials who are looking for that work life balance, the ability to be outdoors pretty easily, and I think are looking for unique places in the country, in the world to make their home base.”

But even more money has been dedicated to the high quality, professional trail construction in Northwest Arkansas. While it depends on the project, many of the funds donated by the Walton Foundation are made available through grants, which require matching funds from the community. To that end, the local municipalities have also invested a significant amount of money in their trail systems. “One example would be the city of Fayetteville and the Mt. Kessler trails. It was a 50/50 split, so a one-to-one match,” said Minkel.

Locals versus Tourism, or Locals AND Tourism?

Generally when we write about trail development, the focus is on promoting tourism to a local area and boosting the economy through an influx of dollars. While some organizations in and around Northwest Arkansas, like Oz Trails, seem to have that as their goal, when you hear the stated purpose of the Walton Foundation’s Home Program, which has contributed $59 million to local bike infrastructure, at first glance the two goals seem to be antithetical. Or are they?

I put the question to Minkel in our conversation. She thinks that the push to increase tourism can only help her mission to attract and retain talent. “I think that the trails are certainly retaining people because they add to the overall quality of life,” Minkel reiterated. “But the wonderful thing about tourism is that you’re bringing people in all the time, and I think we hear over and over how pleasantly surprised people are when they visit the region. And when they go back out they are essentially serving as ambassadors for the region.

“So whether they come back again and again, or whether they tell their friends about how cool Northwest Arkansas is, I think we see that as a win-win for us,” said Minkel. “Whether they experience Northwest Arkansas and then ultimately decide to move here, or they stay here because the quality of life is wonderful, or they go out and basically market the region to the rest of the world.”

I personally found this both/and perspective refreshing. And the reasoning follows: trails are good for everyone, both visitors and locals alike. The relationship can very well be symbiotic.

The caliber and breadth of trails in Northwest Arkansas couldn’t exist without the influx of money from the Walton Foundation, and yet everyone–both locals and tourists alike–benefit. Stay tuned for more information on two key rides in the region over the next two days.

Trails
Is Eagle, CO the Next Fruita?
Events
My 2015 Epics: What Are Yours?
Trails
The Perfect Colorado Whirlwind Road Trip
Trails
Desert Trails Bike Park Opens in Phoenix, Arizona