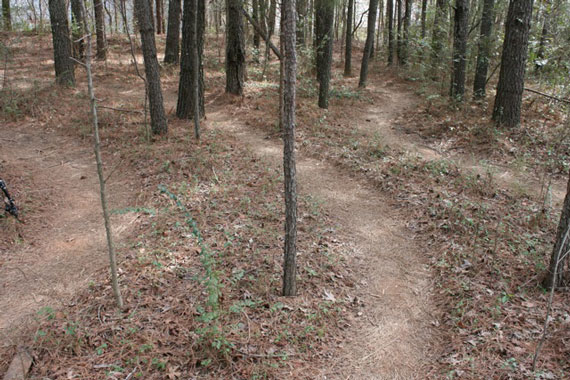 First and foremost, a mountain bike trail should be fun to ride and longer trails are generally preferable to shorter ones. But cramming 10 miles of singletrack into 10 acres will result in sharp turns, boring routes, and zero flow. Instead it’s important to balance length and rideability, though I don’t know if there’s a magic ratio of miles of singletrack to acres of land. I’ve ridden a trail that packs more than 7 miles into under 30 acres and it flows pretty nicely, though the sharp, twisty singletrack isn’t for everyone. (Yep, that’s 170 miles of trail per square mile in case you’re wondering.)

Densely packed trail systems can also feel like riding a gerbil wheel at times. In poorly laid out systems it can seem as if you’re riding back and forth without ever really getting anywhere. With a little extra effort planners can draw up nested loops to give a trail a little more interest and mystery (like the trail pictured below). Vegetation can help with the illusion as does limiting the number of intersections where the rider needs to make a decision. Dense trails can feel crowded since it’s easy to see other riders on parallel paths so it’s important to control traffic flow to avoid collisions. 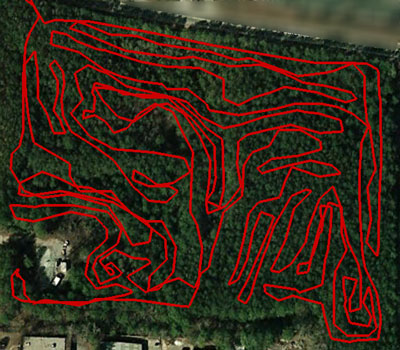 The other consideration for trail density revolves around environmental impacts. Dense trails generally necessitate removing more vegetation per acre and exposing more soil to potential erosion. In extreme cases it can also mean intruding into and taking over wildlife habitats which isn’t a good idea.

Trail density may also be impacted by natural features and topography. For example, planners may try to take advantage of a solitary hill by running the trail up and down several times to maximize elevation gain/loss. In other cases, a trail may bunch up in forested areas before running straight across open fields.

As suitable land for bike trails becomes more and more scarce, trail designers will be forced to consider trail density more carefully. The good news is that constraints often yield the most interesting solutions – who’s up for a double- (or triple-) decker trail system!

Progression
Mountain Bike Race Prep Tips: Event Logistics to Know Before...
Progression
How to Survive in the Backcountry In an Emergency [Podcast...
Progression
5 Things to Do When Recovering from a Traumatic Injury
Culture
Planning Your Summer MTB Adventures

Gear
Why are Good Rain Jackets so Expensive? We had to...
Gear
13 Reliable, High-Quality Mountain Bike Products Designed to Last
Progression
Mountain Biker's Guide to Paleo: Reviewing the Whole Foods Diet...
Progression
How to Stay Strong in the Off-Season, Even if You're...
Subscribe
Login
Please login to comment
7 Comments
Most Voted
Newest Oldest
Inline Feedbacks
View all comments

I ask myself that same question. In Ontario it’s not too bad however there are a few places where the trails double back really close to one another. I just don’t find that all to much fun. I prefere those rides where you have a larger loop or point to point type of trail.

Some how I don’t feel it’s a real trail when you can high five on comming “traffic” from the opposite way.

That is a very good question, and one that has crossed my mind many times due to all of the riding I’ve done here in the southeast and the midwest. I totally agree with your post: there has to be a balance between trail length and rideability.

I enjoy really tight and twisty trails. We have a trail like that in my area with corners so tight you nearly have to stop completely to make the turn. It’s just a different experience. Great place to hone your bike handling skills. I like the wide open trails too though.

Thing for me as a rider, is we call it mountain biking for a reason. To be outdoors and in the presence of nature and vegitation. To see layers of trails like this are very unejoyable for me. Maybe its because I grew up in an over populated and flat city of Miami, but I love trails that have minimal impact to the land. Scenery to me is just as vital as the ride itself.

This specific trail is a super fund site so it may never be developed – so no worries about impact.

Our local IMBA chapter is in growth mode, so we are frequently assessing land and trying to determine how many miles of singletrack it can sustain. I’m using acres per mile of trail to assess trail density. In the midwest, I find that small urban parks can get down to less than 10 acres per mile. 15 acres per mile is a target we work with, and the trails that really make you feel lost in the woods can be 20-30 acres per mile.

I’d be interested in any relative measures others may see elsewhere. We use this measure throughout the planning process to make sure everyone is on the same page regarding the type of facility we are building.