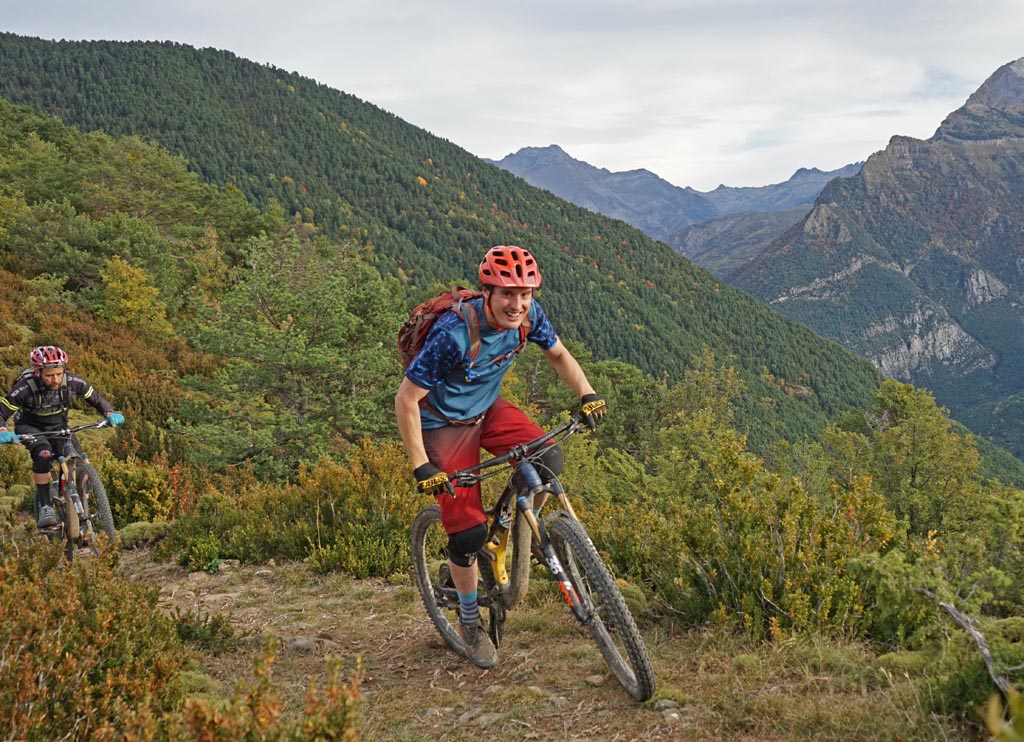 This is part two in a three-part series on mountain biking in the Spanish Pyrenees. You can read part one here.

On the fifth day of our mountain bike tour in the Pyrenees with BasqueMTB we arrived in the small town of Biescas in Val de Tena, a place with 1,100 full-time year-round residents.

Biescas has a similar story to many places in the Pyrenees. Much of the population left for larger towns, brighter lights, and jobs in the cities of Spain. But today the people of Biescas are hoping to bring year-round tourism to support local workers, much like Zona Zero in the Ainsa/Sobrarbre region has.

Biescas is located at just 875m above sea level, near Valle de Tena, a North-South running valley that was carved by glaciers, home to the highest concentration of 3,000m peaks in the Pyrenees. Historically an agricultural area, it is now a destination for skiers, hikers, and increasingly, bikers.

Our shuttle driver Andres is the main trail builder here. He’s the primary trail worker in Biescas and gets by on the odd grant from the town while putting in countless hours of volunteer time shaping the land. He is also chief maintainer, map maker, sign poster, and head janitor for the region’s fledgling sports and tourism initiative BTT Pirineos Alto Gállego.

As with Zona Zero, the BTT Pirineos initiative aims to bring together all aspects of the tourism industry in Biescas, including hotels, restaurants, adventure tourism companies, and transportation companies. Part of their work involves erecting trail signs and providing maps of the area. However, due to land ownership issues and the ever-changing nature of trails in general, not all of the trails are present on the map. This is another reason to utilize a service like BasqueMTB that can coordinate a local guide like Andreas to find the best trails.

Our Biescas rides involved a traverse of alpine trails in the Val de Tena and rides in the Panticosa ski area covering both sides of the valley. By this time we were used to stunningly good weather and stupendous views. Luckily we were also used to consuming massive quantities of food in preparation for a lot of riding. Today was no exception as we descended 2,500m on one ride from the Val de Tena at Piedrafita Lake.

We then had two uplifts and mostly downhill laps at the ski areas of Panticosa and Santa Elena.

Valle de Tena is mind-blowingly beautiful. Even by Pyrenees standards where every valley and its peaks look like they’re carved out of the ground by worshippers of aesthetic lines, the valley’s lines are hard to describe. For skiers the place is lousy with couloirs and rowdy chutes. For hikers, there are meadows, lakes, furrows, caves, cracks, and views galore. And for mountain bikers? Well there’s a reason that Andres’ PirineosMTB enduro tour runs dedicated mountain bike trips, either hut-to-hut utilizing Pyreneean refugios or via town-based trips.

If anything showcases the remoteness of the Pyrenees and the relative absence of people, it’s the trails surrounding Biescas and winding their way through the Val de Tena. 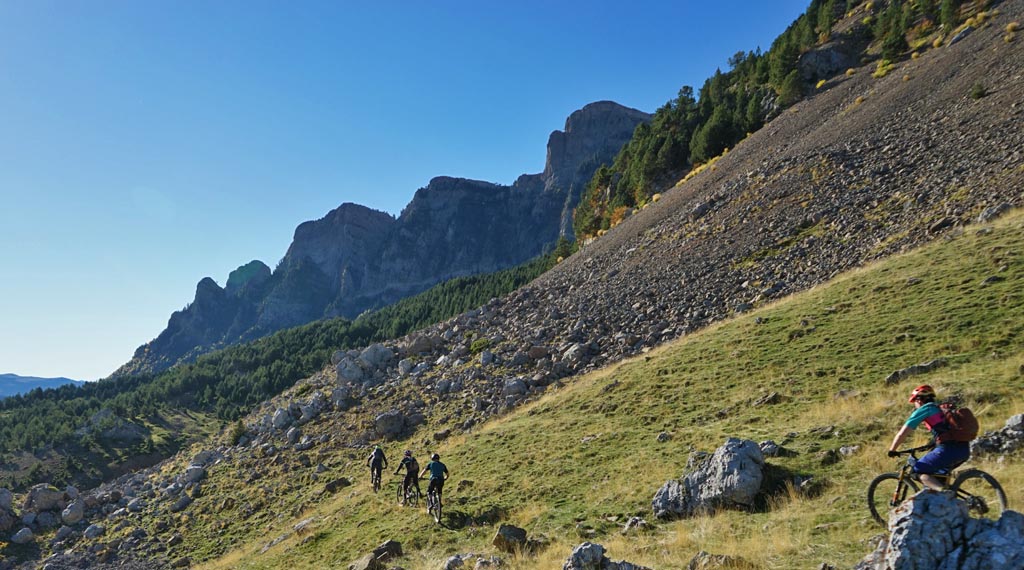 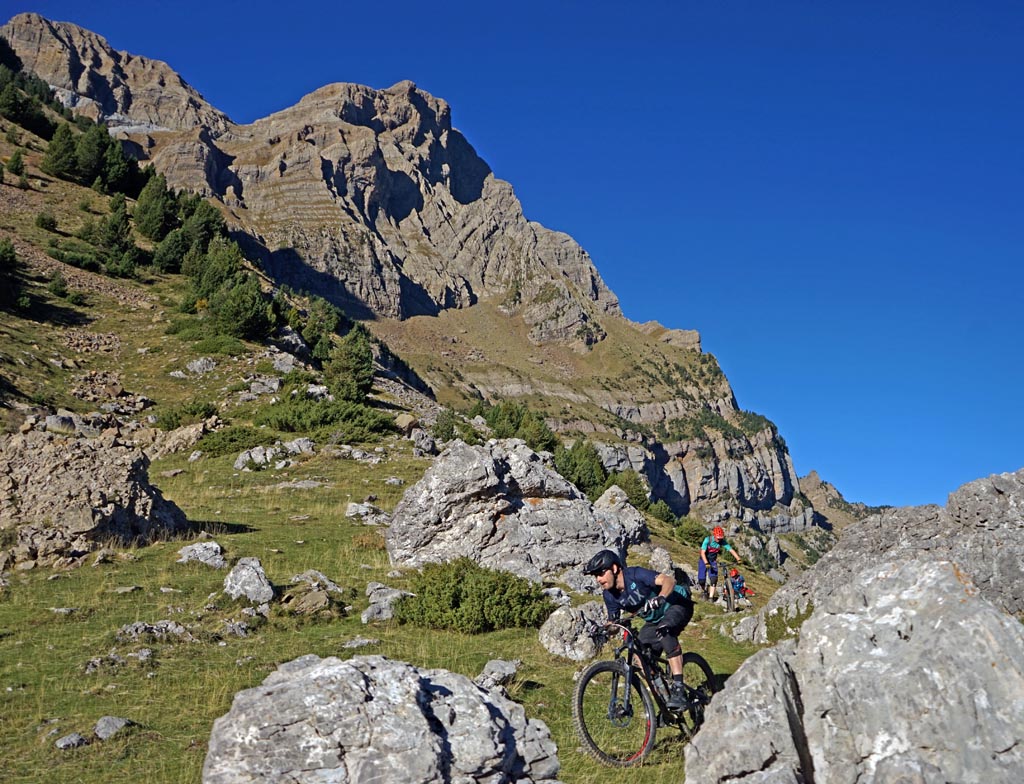 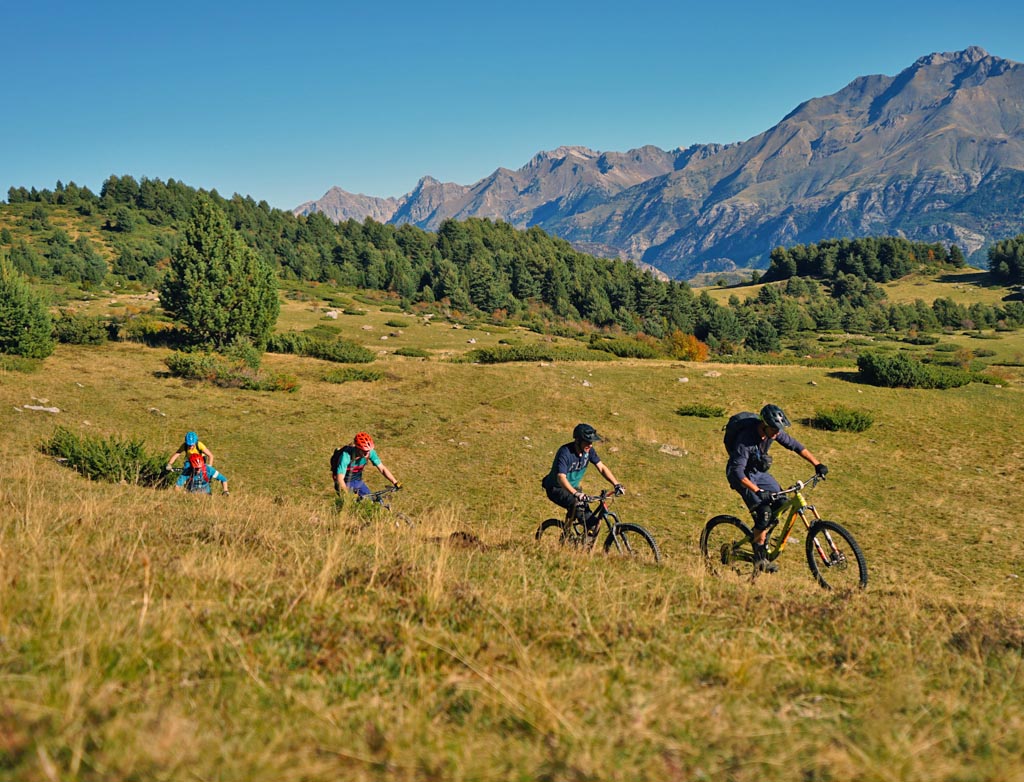 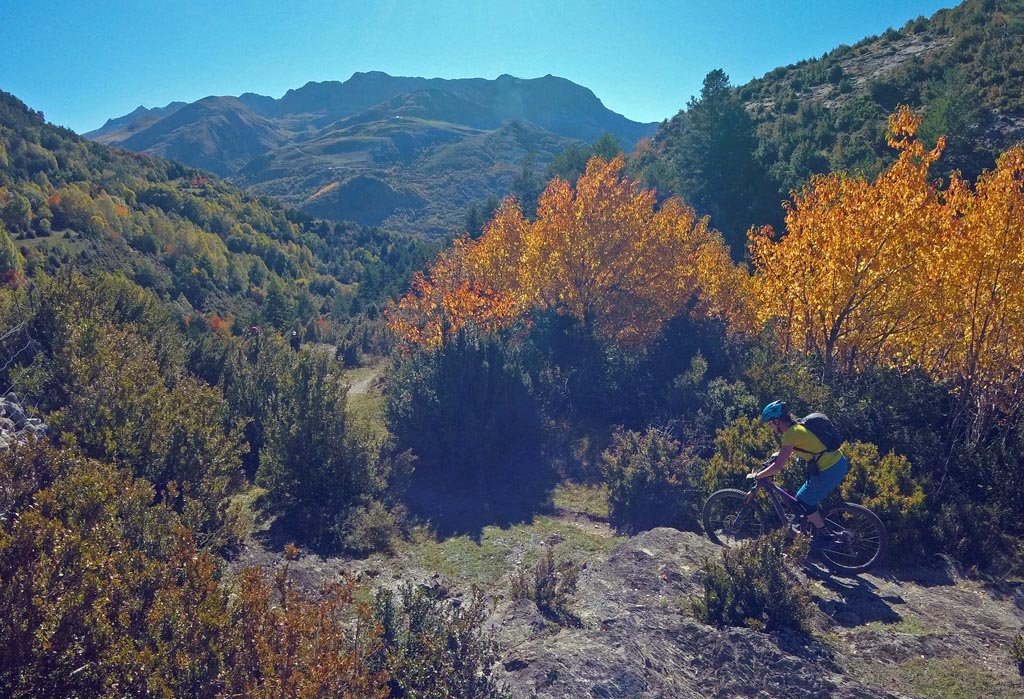 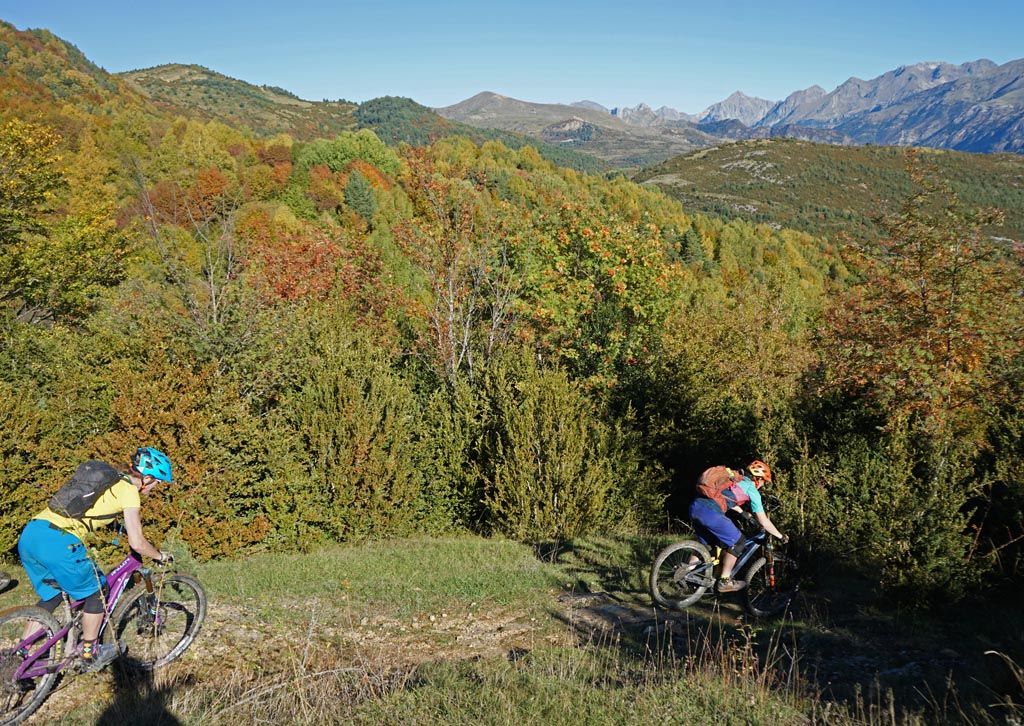 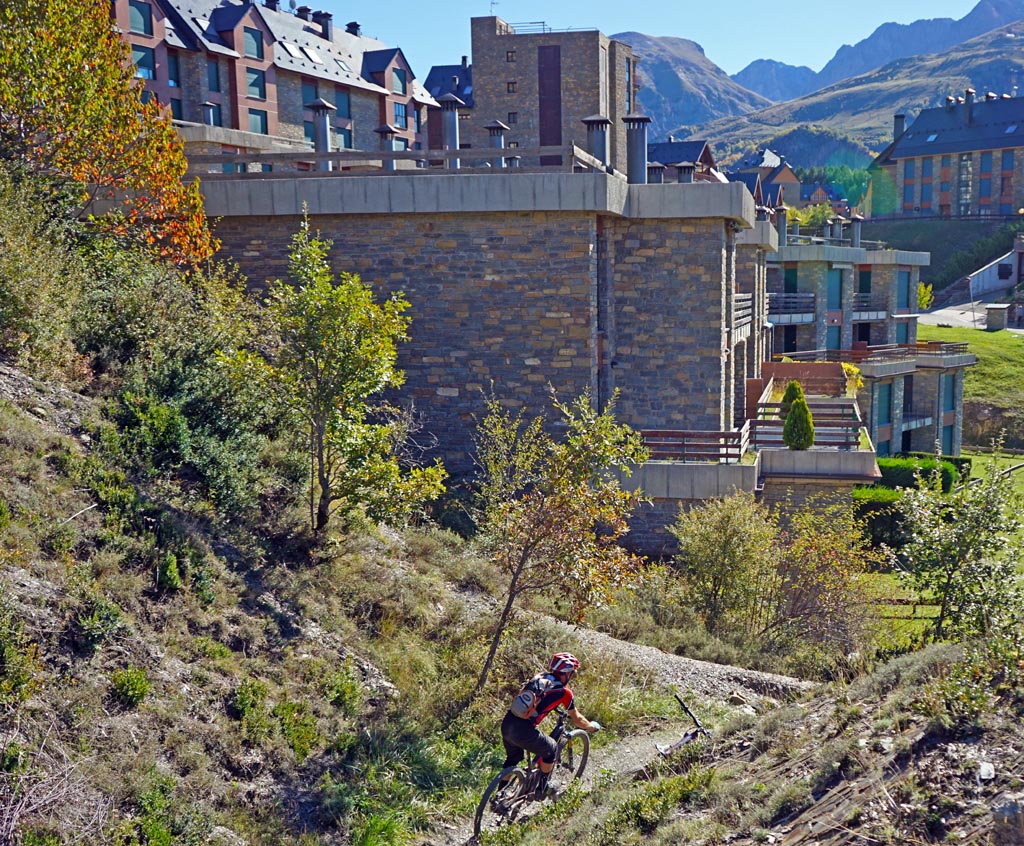 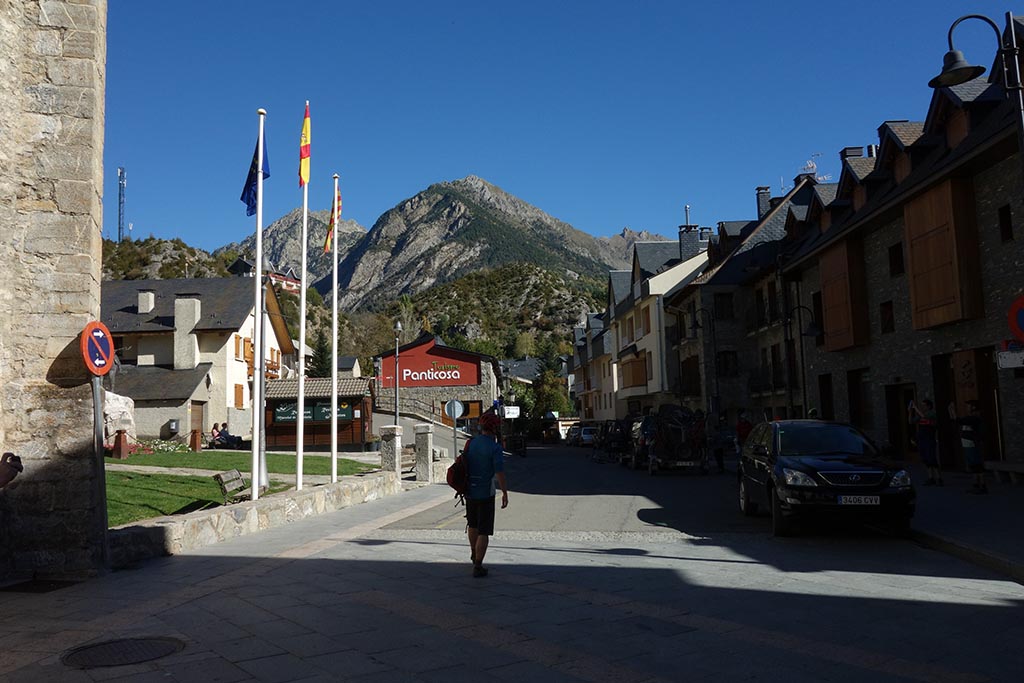 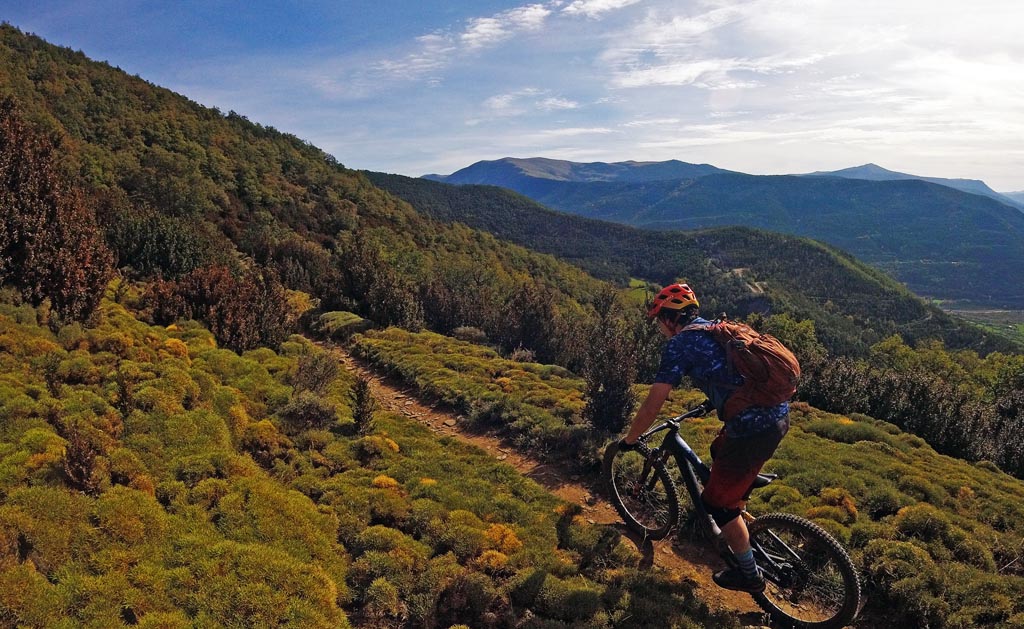 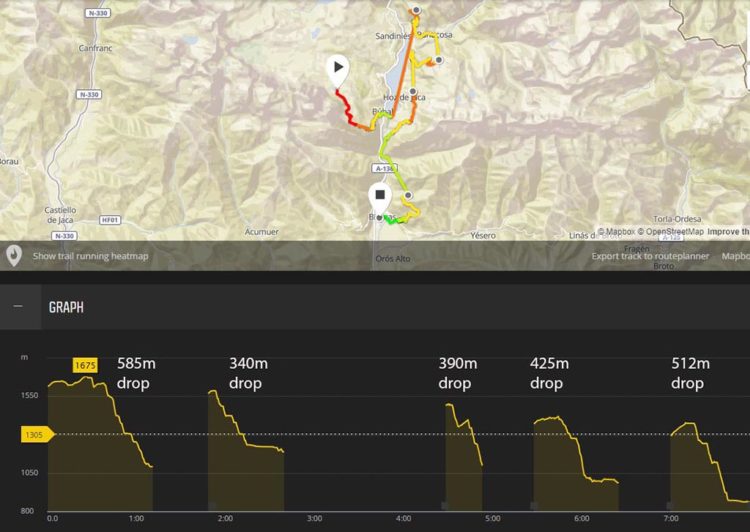 This was our last day of riding in the Pyrenees with BasqueMTB. We rode some more trails near Biescas. The weather remained warm and dry, but different weather systems were approaching.

We rode more trails built and maintained by Andres. When I asked Andres if there were any conflicts with other trail users in the area he looked at me with an odd look that said, “conflict with who?” Nobody uses these trails as most of the young people have left, and the older people see the mountains as places for work, not recreation. The only real users are the hikers and bikers. Yay us!

We descended 1600m and climbed 790m on trails including Sobremon and then Arrieras.  The latter is a trail the indefatigable Andres has rerouted to make it more sustainable.  We finished off with Punta Punero. 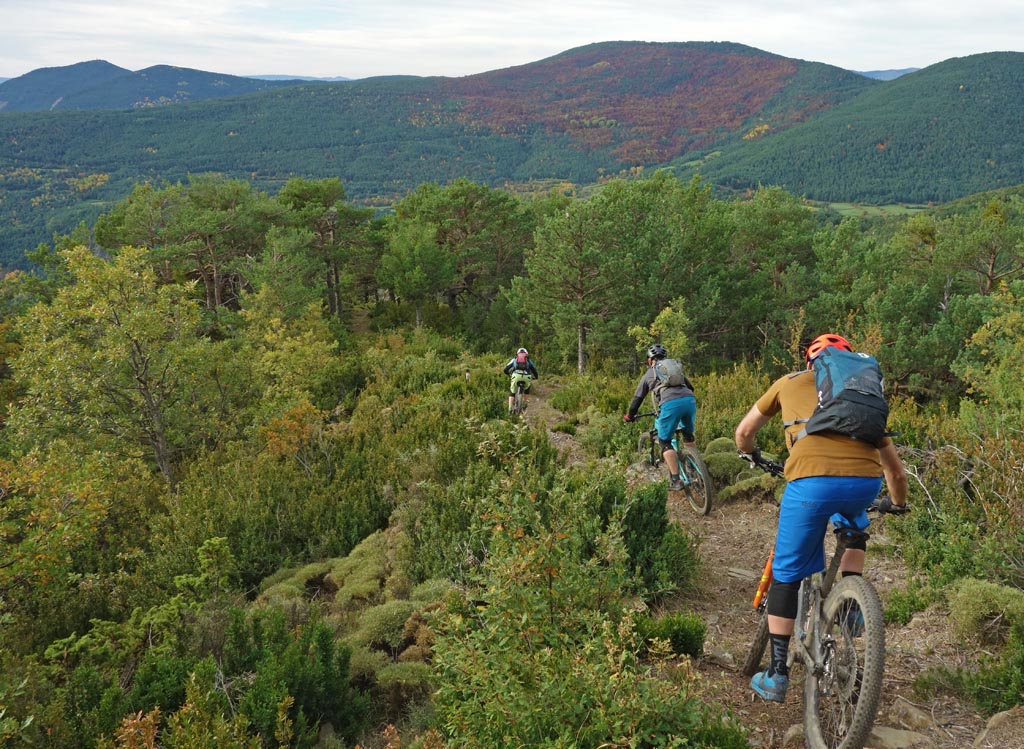 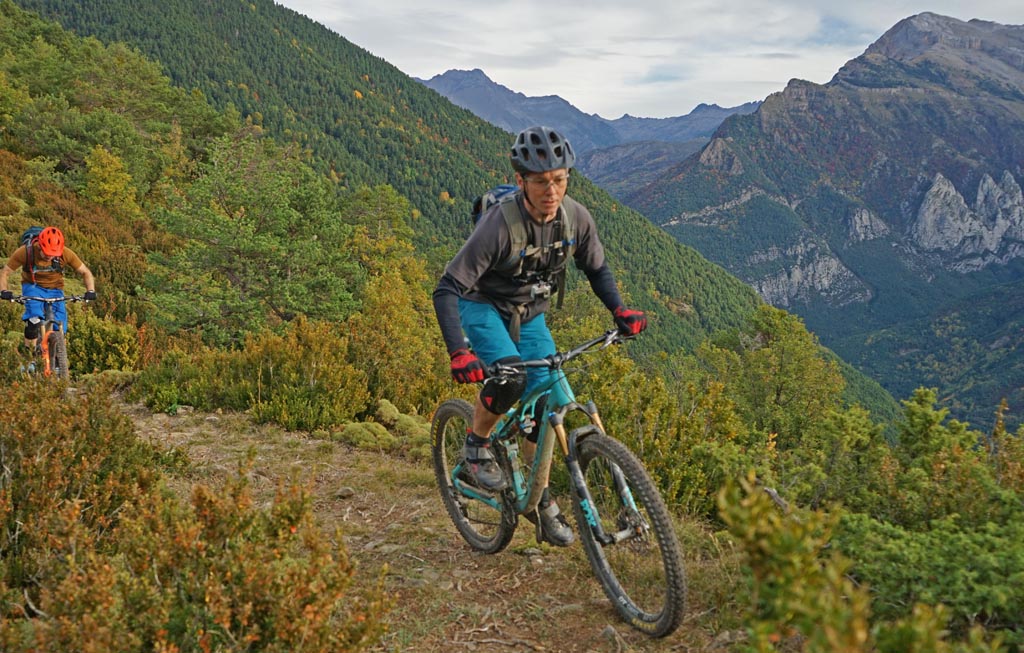 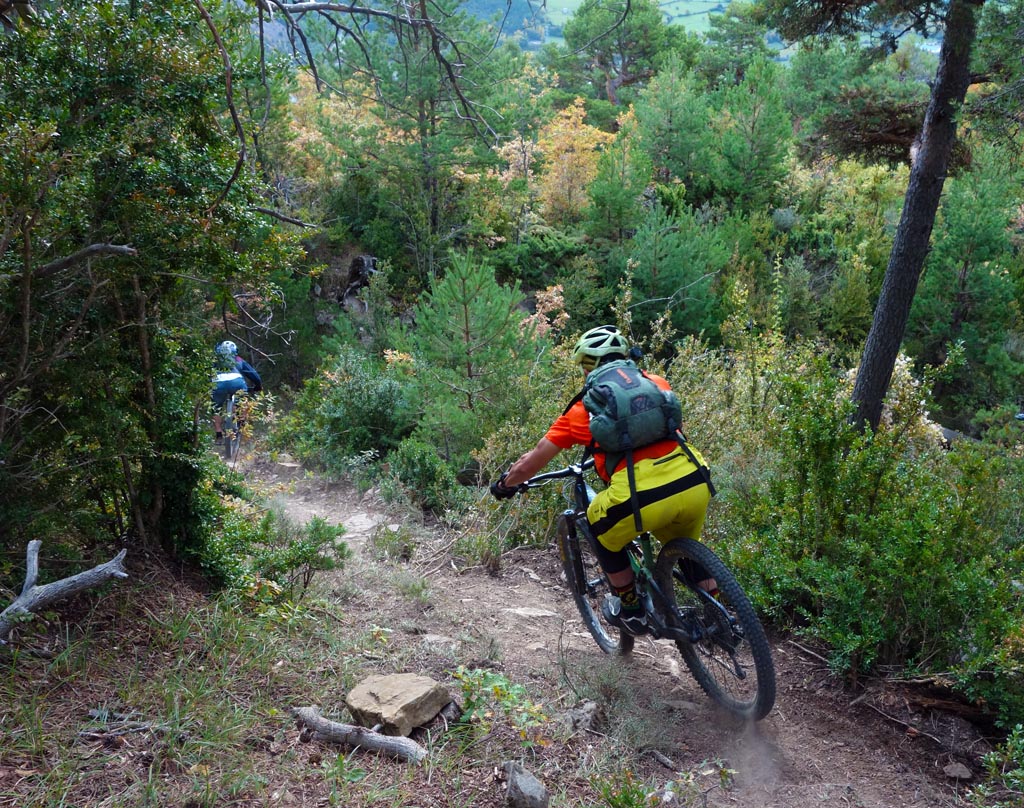 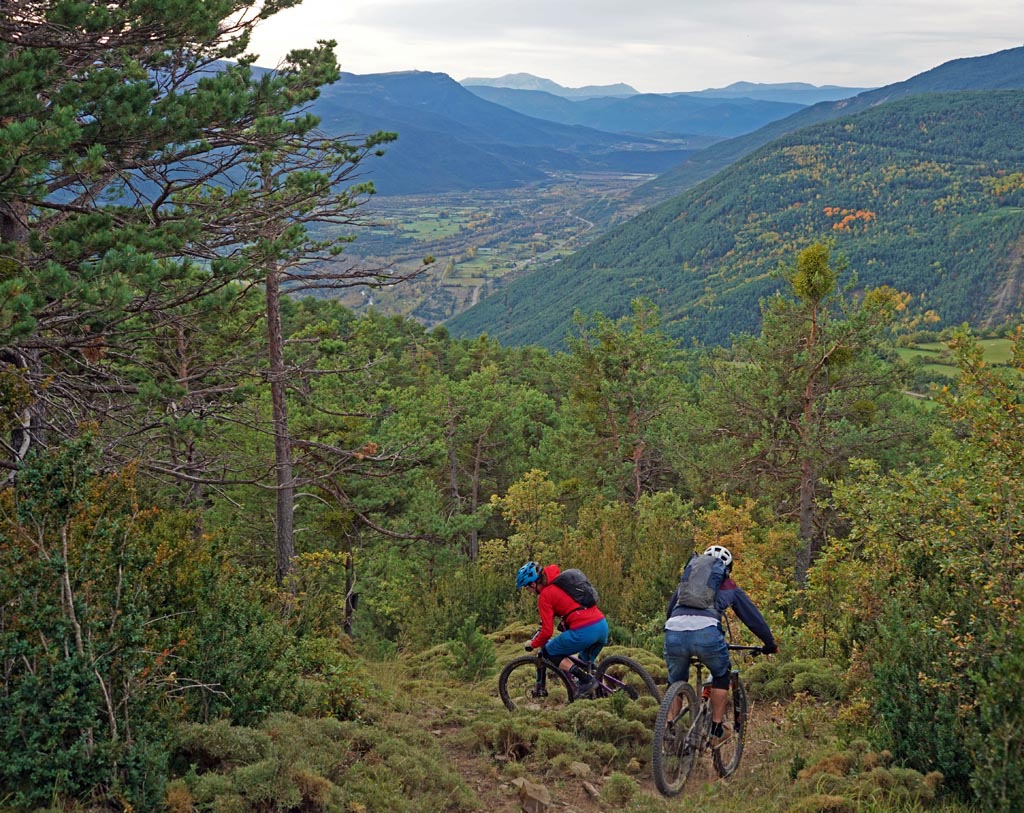 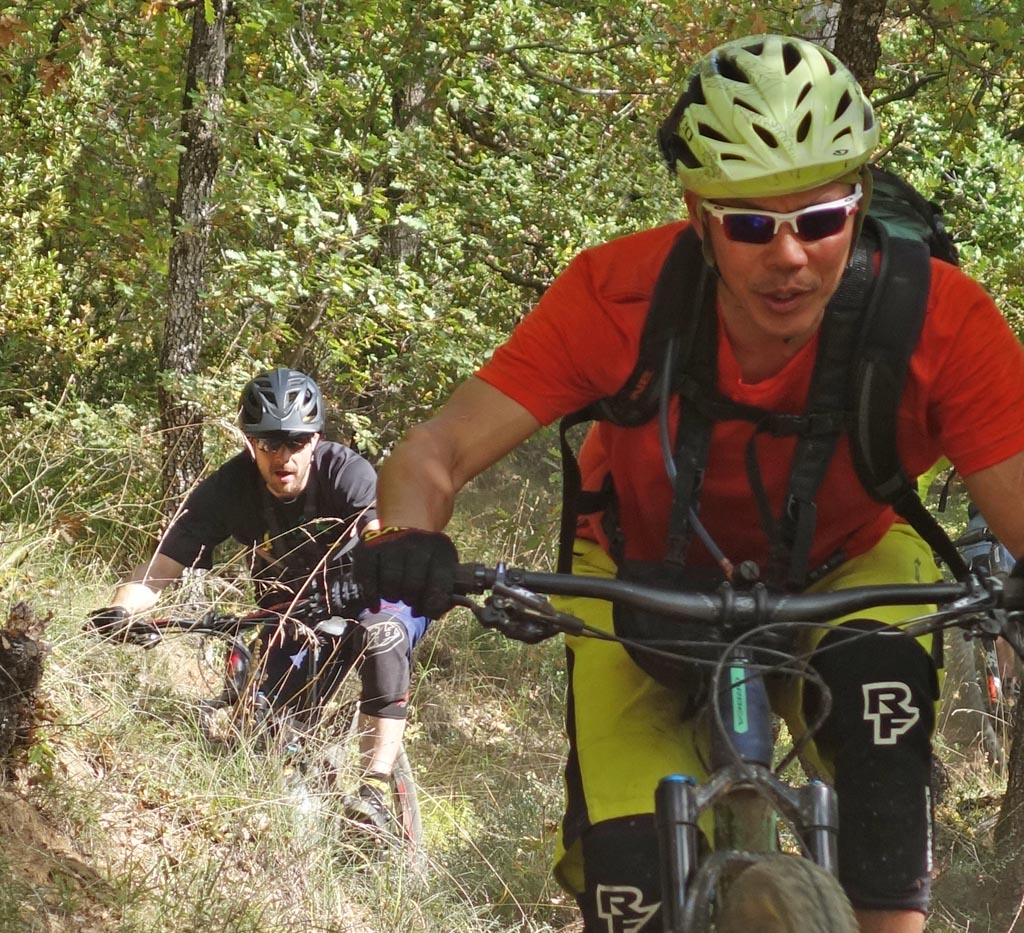 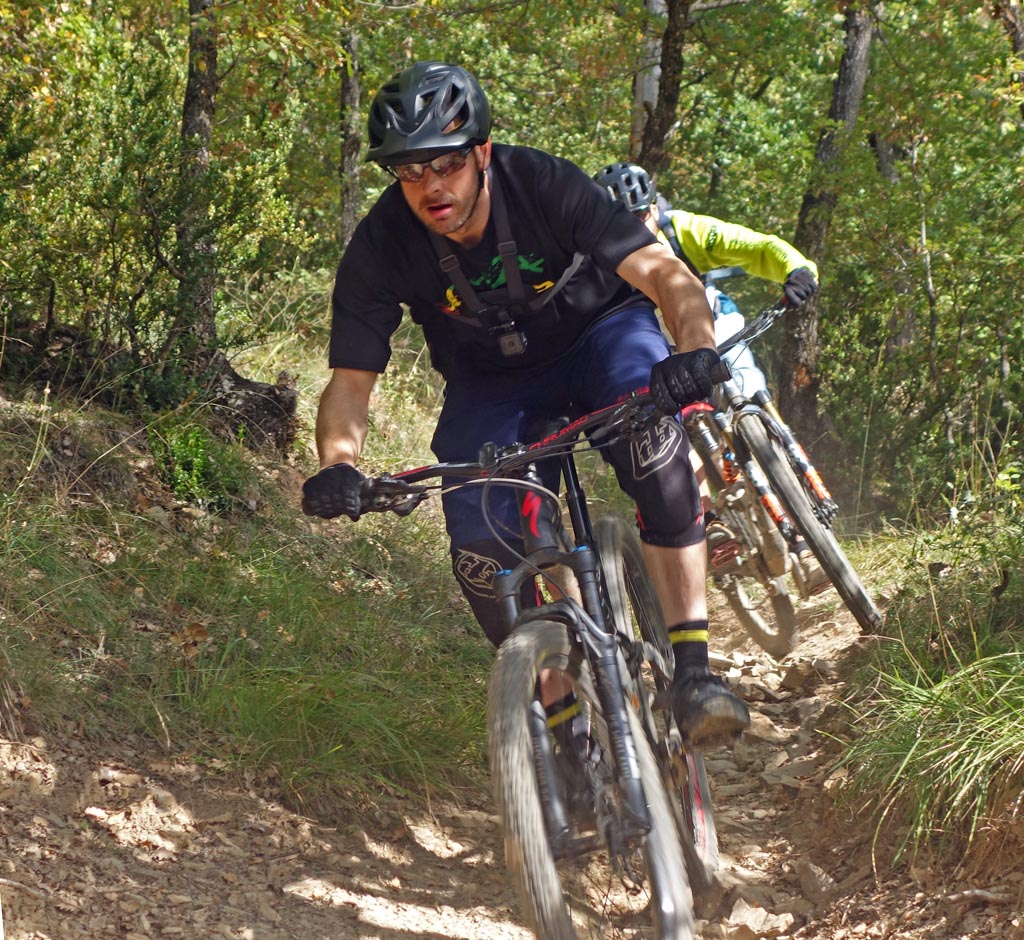 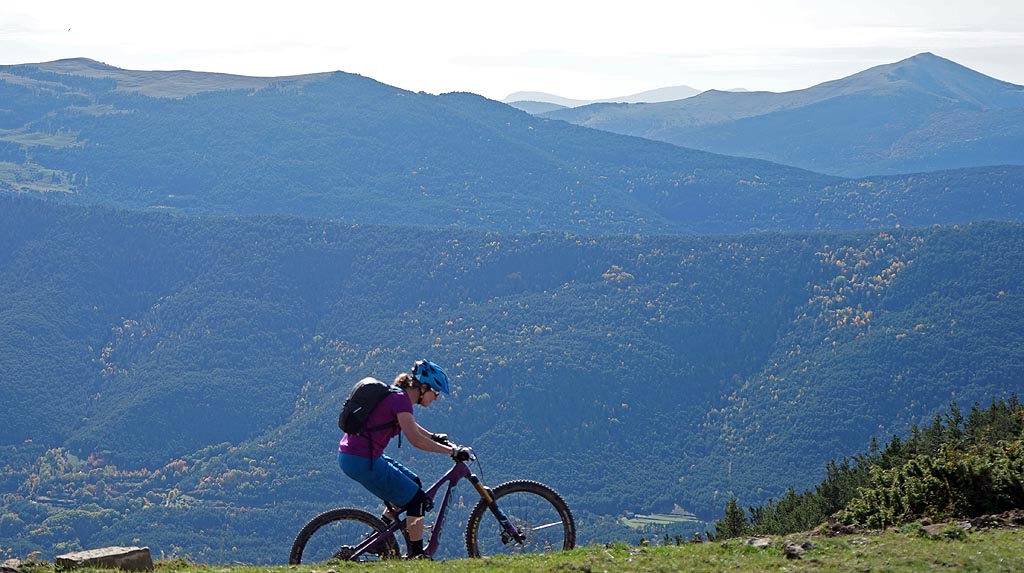 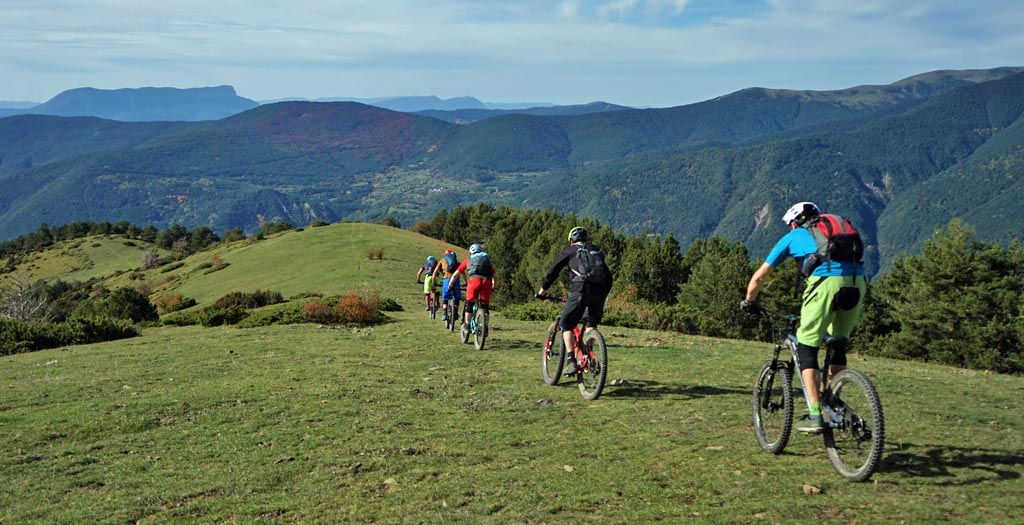 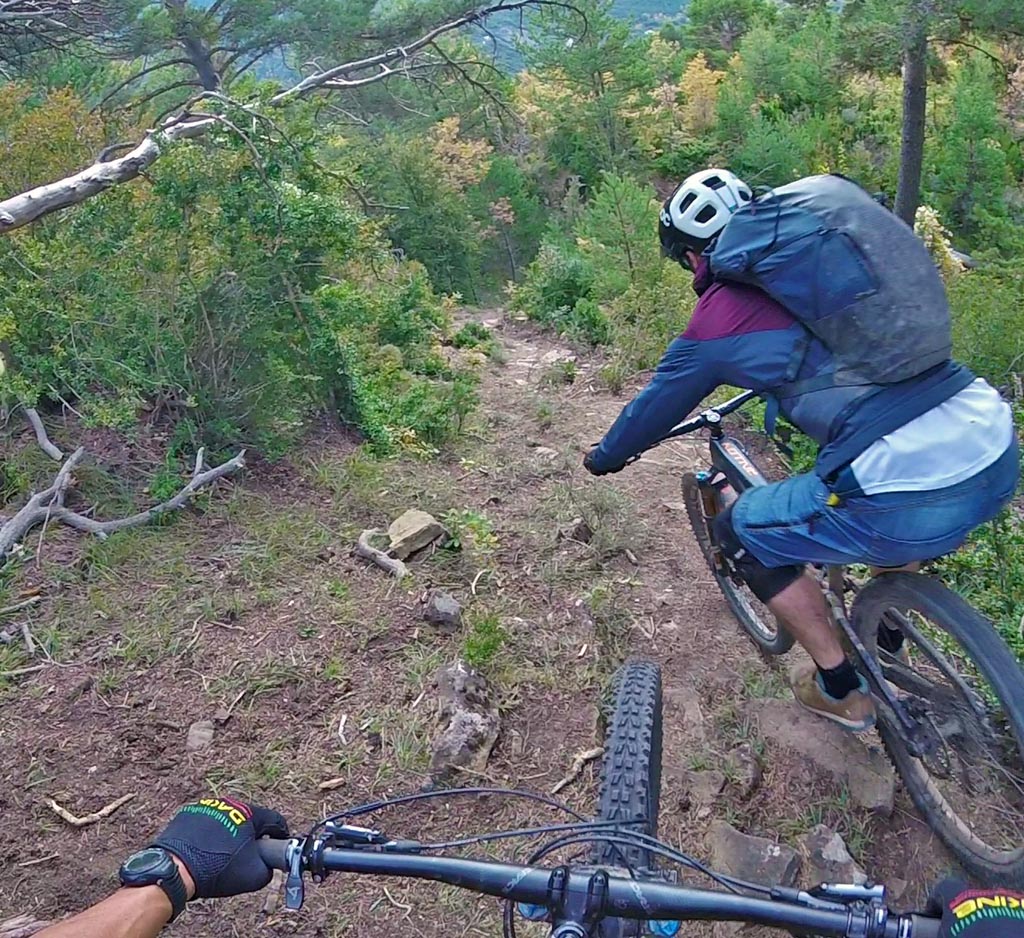 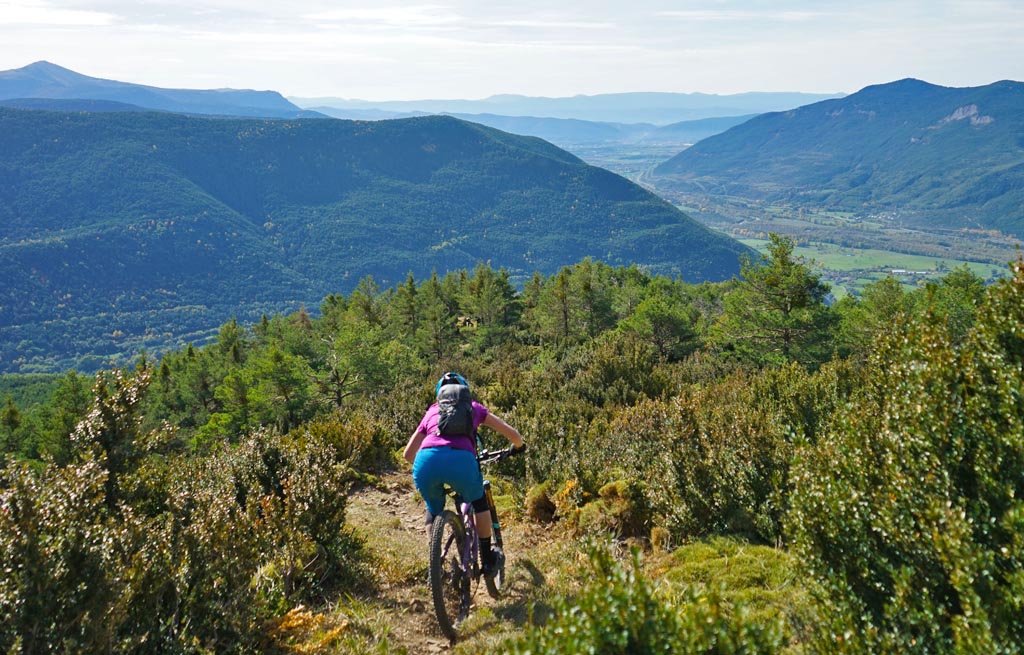 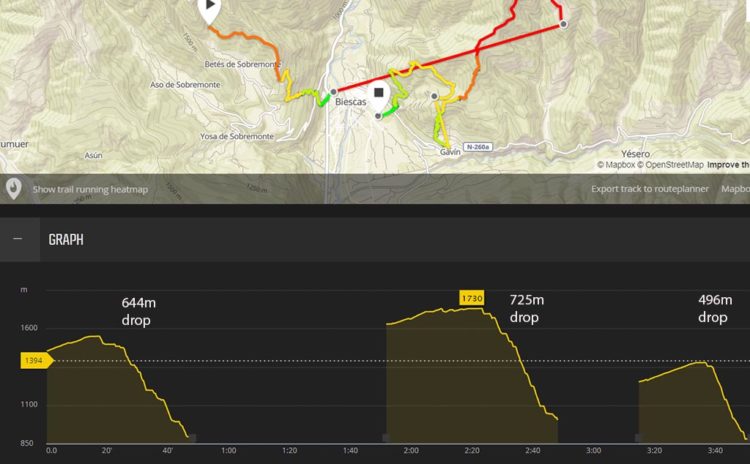 Elevation profile for our final day of mountain biking in the Pyrenees.