If you grew up in the 1980s, chances are you’re familiar with The Dark Crystal. In case you missed it, much of this animatronic fantasy film is set in a lush, otherworldly location filled with magic and beauty. And for kids like me, the movie was also a little scary. (Netflix is actually releasing a series reboot at the end of this month.)

Whistler’s Dark Crystal mountain bike trail is kinda the same as the movie: beautiful, magical, and at times, scary. It’s one of the newest sanctioned trails in the Blackcomb area at Whistler in British Columbia, its construction and maintenance supported largely by the Whistler Off Road Cycling Association. Riders don’t need a lift ticket to access this instant classic; just a strong set of legs and lungs plus a healthy dose of confidence and courage to get back down the mountain.

On paper, riding Dark Crystal looks manageable. The roughly 7-mile loop involves 4 miles of climbing, a couple miles of descending, and about a mile of traversing back to the start. In reality, neither the climb nor the descent come easy. The trail is officially rated a black-diamond trail so it’s meant for advanced riders only.

The loop begins with a steep gravel road climb beneath the Blackcomb gondola. Entering the forest, the road switches back and forth while the grade rarely slackens for long. The roughly 2,000 foot climb averages 10% from bottom to top, though there are sections where the road is much steeper. I quickly maxed out my 12-speed drivetrain, along with my heart rate.

On the way to the top, a group of riders on electric mountain bikes passed me. It was clear from the electric whirring and groaning noises that their bikes weren’t happy with the climb either. I noted a few riders choosing to dismount and walk particularly steep sections of the road.

At around the 2-mile mark the route dips off the gravel road and onto a singletrack trail called Out of the Dust. It’s a fitting name, as the trail, which mostly parallels the road, gets riders off the dusty road and onto a quiet, dark, and loamy ribbon through the forest. Pedaling the rooty and tight trail takes tremendous concentration, especially after riding head down and gulping for air on the road. It’s along this short section of trail that the Crazy Trail and Hey Bud descents branch off.

All told, the Out of the Dust trail is only half a mile long, then it’s back onto a gravel road for the final climb to the start of Dark Crystal. 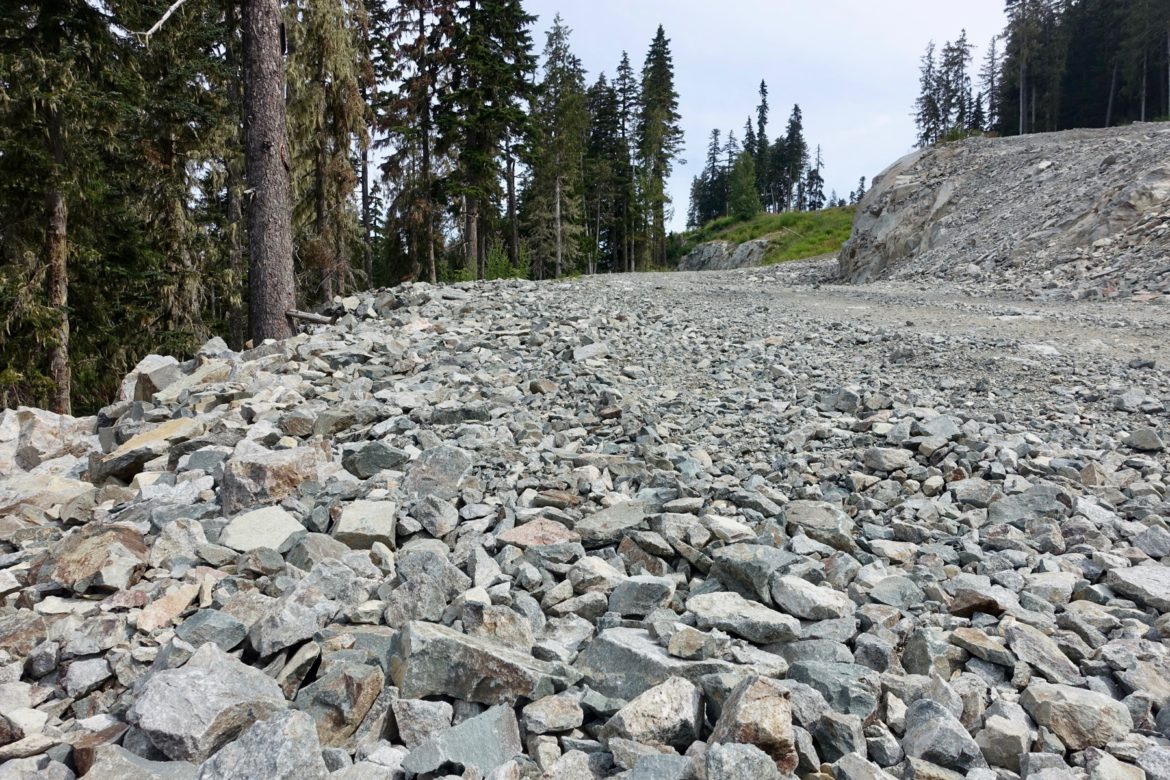 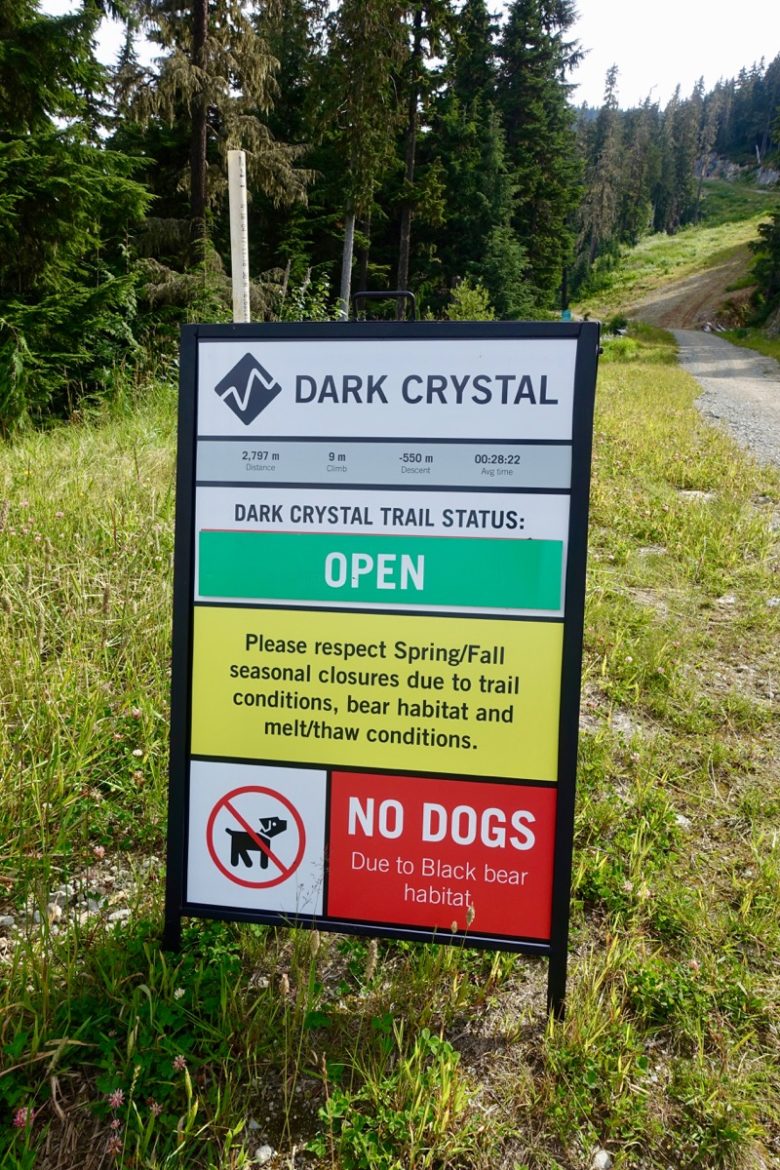 There are multiple trail status and directional signs along the way. I had been warned by several folks that the Dark Crystal trail could be closed due to wet conditions, though fortunately it hadn’t rained for a least a couple of days before my ride. I assume the trail is closed when it’s wet to protect the trail. By the end of my descent, I decided closures were just as important for protecting the riders, and not just the trail. I hate to imagine how slippery the roots get on the 20-degree slope in the rain!

Yes, there are views from the top of the Dark Crystal trail, but I’m pretty sure that few will ride here for the epic vistas. There are even better views to be had, and at a much lower physical cost, within the lift-served areas of the bike park. No, this ride is all about getting an intimate look at the rocks and soil that make up the mountain, and not a simple overview.

The Dark Crystal descent begins innocently enough with a steep but grippy rock roll that seems to get even steeper until it finally drops into the pitch black forest. I stopped for a moment to let my eyes adjust, and as they did, I found a tumultuous emerald sea of moss blanketing rocks and a jumble of fallen trees. 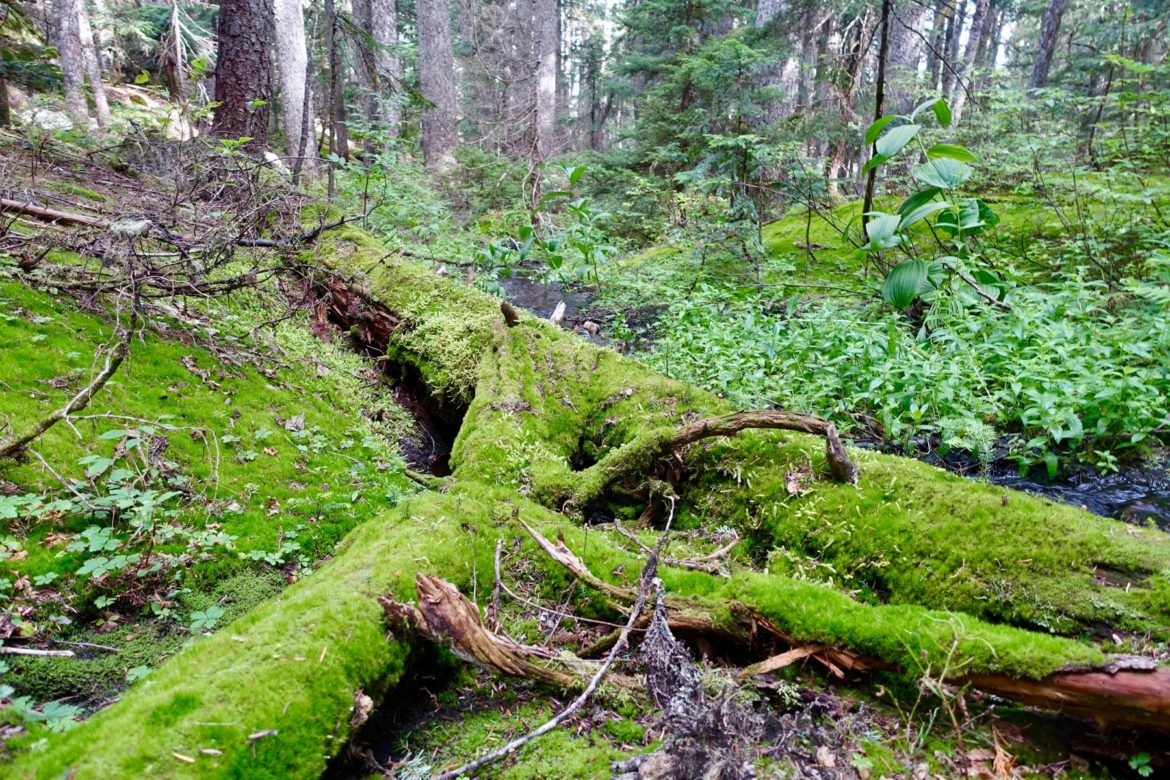 A stout wooden bridge built from found materials leads onto a mostly bald rock outcropping, providing the final views across the valley below. From here on out, the trail follows a relentless charge to get to the bottom of the mountain in the most direct route possible, steep slopes and tree roots be damned. 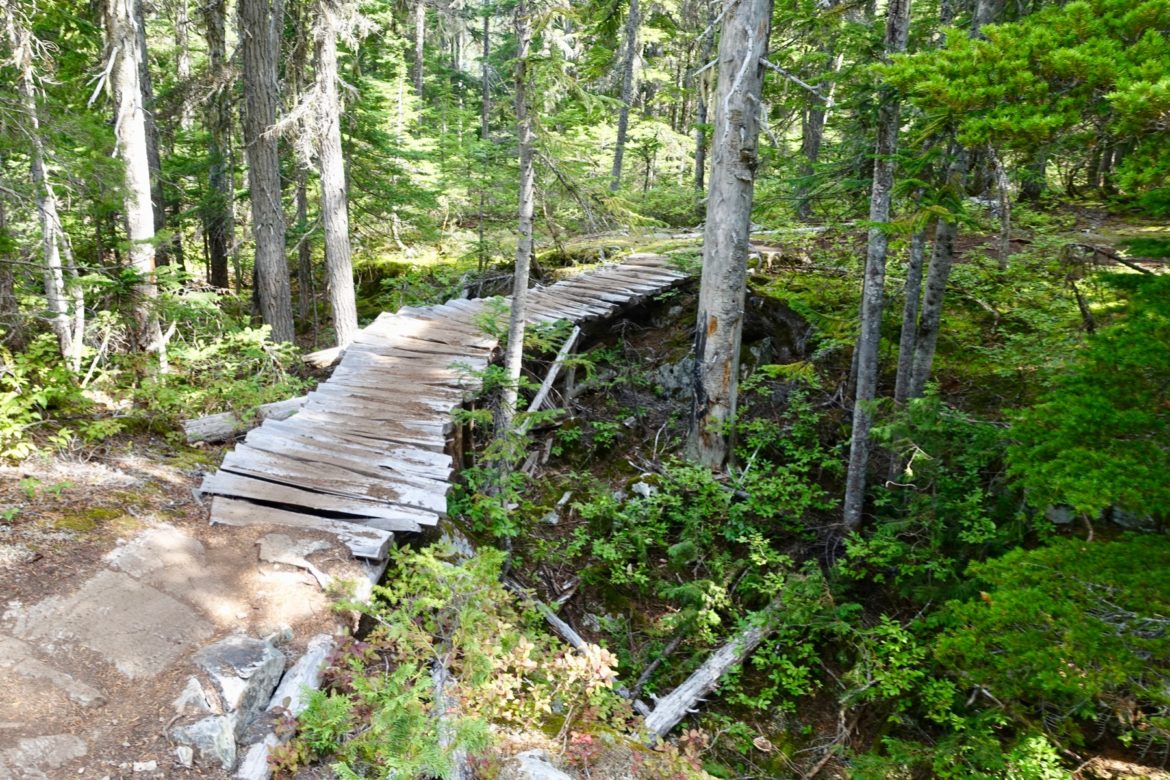 For many, riding in loam is a new experience, and the Dark Crystal trail offers buckets-full of the stuff. The ever-shifting loam gives the appearance of brand new trail, seemingly etched into existence by nothing more than a brief parade of knobby bike tires. Of course a lot of work goes into building any trail, especially one through such rugged terrain, but it’s hard to appreciate trail builders’ work when you’re over the back of the saddle and gripping the bars for dear life. 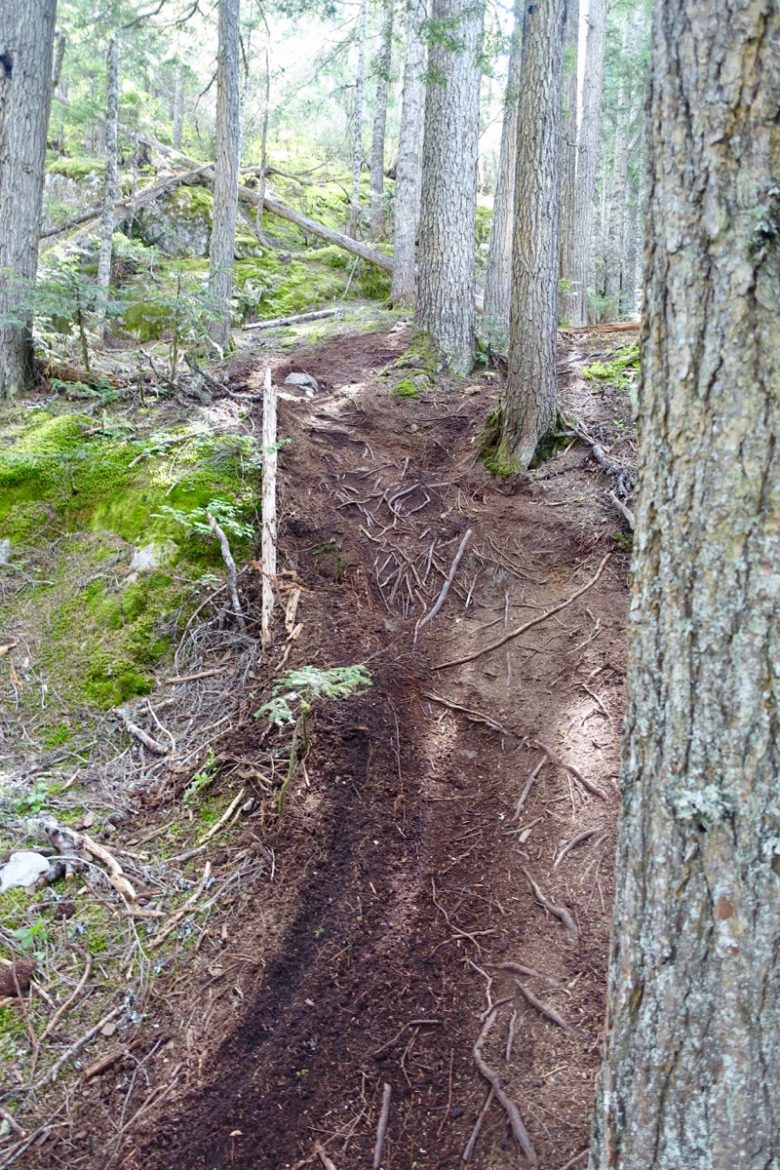 Despite a multi-day break from precipitation, the damp loam keeps roots and rocks greasy, which only compounds the challenge of holding the steep, narrow lines.  Stopping to assess the trail ahead is not rewarded, as any loss in momentum increases the chances of snagging the front wheel in a root well and tumbling down the steep slope.

Somehow the trail feels like it gets even steeper just before the bottom. After stopping and starting again, I was unable to get either foot clipped into my pedals before having to fully commit. There simply wasn’t anywhere to slow my roll and certainly no opportunity to lift a foot. About two minutes into the seemingly endless white-knuckle descent, feet still unclipped, I decided I’d had enough. Not that it mattered what I thought or felt; the Dark Crystal still wasn’t done with me. 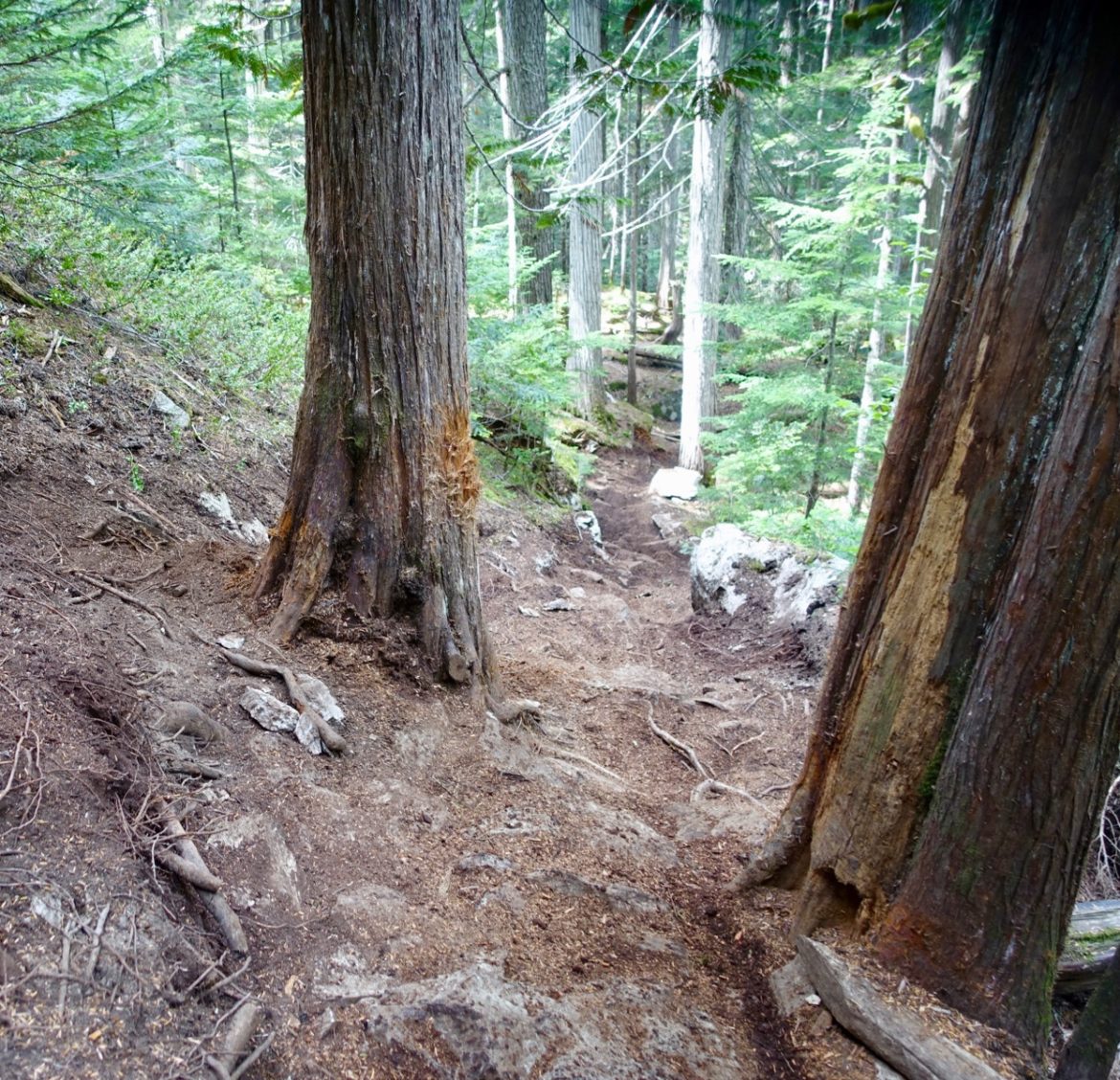 And then, just when I thought I would never find the bottom of the trail, a gravel road appeared. There was no one to high five, no groups of padded-up riders milling about, contemplating their next run. Only silence.

The mellow peddle back to the Blackcomb village area gave my nerves a chance to relax, though I couldn’t shake the feeling that I’d just experienced something magical. And just like the movie, while I found the trail scary at times, it was all worthwhile for the happy ending.