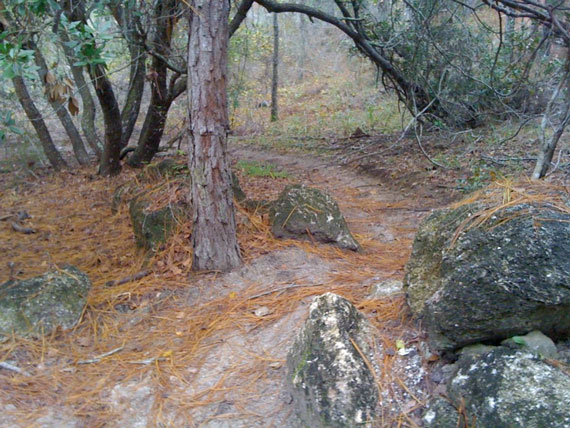 Graham Swamp mountain bike trail near Daytona Beach, FL was built more than 7 years ago by Mickey Garrett and some friends. The 6.5 mile trail has been maintained by Garrett under an agreement with the landowner, St. Johns River Water Management District, and until recently, everything was cool. That is, until the local bike club, FACES, started showing up with their own volunteer trail workers and “dummy(ing) down the trail,” according to Garrett.

FACES club vice president Tony Libretti says his group was just trying to add a few miles of new, easier trails for beginning mountain bikers. Garrett says anyone is welcome to ride at the trail but that since he’s responsible for maintenance, he should be the one to call the shots. The district land manager agreed and the local club decided to back down and allow Garrett to maintain the trails with his own crew.

In many areas, it’s hard enough to get a single group to maintain a trail so it’s surprising to see two groups fighting over who gets to do the work. Clearly much of the dispute centers over “creative control” of the trail network but it still sounds like there are more volunteers willing to work than there is work to be done. I bet there are plenty of trail groups out there that wish they had the same problem…

The other interesting thing here is that the public land manager sided with an individual trail maintainer rather than turning over responsibility to an established club. While we’re sure Garrett is more than capable and deserving, we’ve seen problems with this model in other areas. Even with the best of intentions, an individual “head of the trail” can be viewed by others, rightly or wrongly, as possessive of a trail system that is open to the public.

We’re interested to hear about other trails on public land that are maintained by an individual or ad hoc group rather than an established club and how the arrangement is working out. Should this be a new model for land managers to consider or is it a dispute waiting to happen?

Trails
Ed Sutton Explains The Art And Science Of Trail Building
Trails
The 20 Most Tantalizing MTB Trails of 2016, According to...
Community
One of a kind MTB race series in Florida
Trails
Florida MTB Trail Challenges

I’m really glad St John’s continued to give Mickey control of the trail maintenance. He really knows what he’s doing and has done, and continues to, do an incredible job on this trail. If you haven’t been on this trail in a while, come by and check it out. You will be pleasantly surprised.

While I was down in Florida last month I spoke to a local and we discussed this very issue. From what I was told, there was actually a local bike shop claiming to have created the trails… I was shocked that there would be such division in the community, and with this article – why not all work together. Often enough there isn’t enough help, why fight each other when the trails there are amazing, just make sure additions make sense with the flow and feel of the area already. Plus, why jeopardize the access to the land by causing confusion.
On a brighter side, there was talk of expanding the land use and even creating boardwalks to link up other local riding spots not as easily accessable… maybe with those extra willing hands things can get done to make that a reality.

The trail should go over the rocks, not around them.

This sounds like the deal in Houston years ago with two MTB clubs dissing each other and fighting over who does what to the trails.

I hate of people removing obstacles from an existing trail to make it easier. I hate the idea of people removing rocks at any point to make things easier (unless, of course, there are a bunch of large, loose rocks on top of the trail, not embedded in the trail per se.)

Idk, it’s a touchy subject. But I agree with the decision made, because it was made by a private land owner. This isn’t public land we’re talking about here, it’s private. Yes, the trail is open to the public. But I totally think the land manager has a right to choose who maintains trails on his land. He probably had already built a good relationship with the guys who had been doing it. Why not keep that good relationship going?

As a GS rider myself, well, when I can make it up that way these days, I have to agree with member ‘joetutt’ here. Mickey is the best choice by far for this trail and does a great job maintaining and building it. I have to also strongly agree with the land management here as well, a very good choice was made. If this local club wants to really help maintain this trail, they really need to cooperate and join in and help Mickey instead doing whatever they feel they need to do. Santos is not maintained this way, and it is the best we have for FL. Our local GFT has the same kind of issues. Everyone wants to build what they want instead of getting with us regular trail builders and working together. A much needed thing for us tired GFT trail builders. One reason the landowners are leveling a lot of these unauthorized trails, DJ’s, and drops more and more lately. Of course having a sanctioned trail would suffice and end most of this unauthorized building or at least bring it to a minimal issue. Go Mickey, you guys are doing a fantastic job on the GS trail.

There’s a lot more to the story here. And don’t get me wrong, Mickey is willing to play nice, but he’s not going to let anyone downgrade this trail. Plus, you can’t just go cutting out trails in the woods. Trail building requires knowledge of grade, runoff, gaps, etc. In order to make it fun and safe, you need a lot of hard work and trail building knowledge.