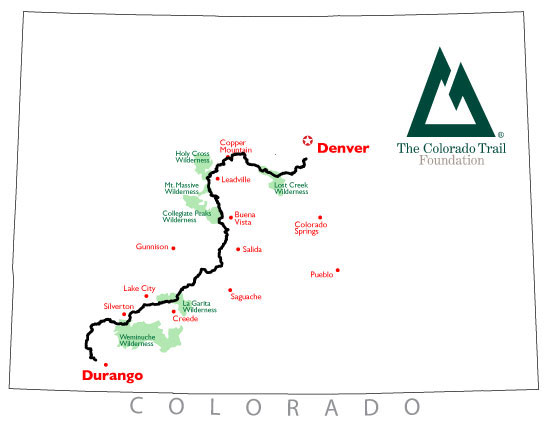 The Colorado Trail, stretching from Denver to Durango, equates to roughly 500 miles with 300 miles of singletrack, gaining 70,000 vertical feet, and reaching up to 13,000 feet in elevation. I had been following the Colorado Trail Race (CTR) for the past two years and was intrigued. The CTR is a self-supported race, meaning you cannot arrange any food drops or place food near the trail for future use. You may, however, use grocery stores for food, bike shops for repairs, and laundromats for cleaning clothes. The whole idea concept really sparked my interest and I started seriously considering a trip.

As ski season was winding down, my friend Mike Behrendt brought up the idea of biking the Colorado Trail. The idea instantly became a reality and I made it my goal to thru-bike the Colorado Trail this summer. I immediately started researching, ordered the guidebook, and was glued to bikepackers.net. It is pretty amazing how much information you can gain on a subject in just a few months.

The most important part of our journey began long before we hit the trail. In March I bought a Trek Fuel EX 9.8 at the Boulder Trek Store. I had my eye on this bike all winter after owning an EX 6 the previous two years. The EX 9.8 is truly the perfect bike for me; aggressive for nearly any downhill I throw at it, and the bike can climb just as well as any trail bike on the market. After I bought the bike, I started to research bike packs and how I would carry all the supplies I would need. I decided to get a large saddlebag, handlebar bag, and some small packs for the top tube of my frame (all of this would be in addition to my everyday hydration pack). After a lot of research I came across Revelate Designs. It seemed to me that Eric, the owner and maker of these bags, knows what he is doing as he has made bags for some of the best bikepackers for some time now.

Now, what did we need to pack our bags with? Mike and I knew we wanted to pack light. We are both NOLS alumni and avid outdoorsmen, so the checklist began: Tent, down sleeping bag and lightweight Big Agnes pad, tarp, isobutene stove, pot, camp cup, etc. As for clothes: bibs, bib knickers, baggy shorts, one jersey, sleeveless base layer, arm warmers, knee warmers, cap hat (to fit over ears and under helmet), extra socks, long sleeve, long johns, lightweight pants, barrier jacket, down jacket, rain jacket, gloves, and hat. We also carried bike essentials like chain lube, a multi-tool, a rag, Stans, duct tape, electrical tape, tire boots, quick links, needle and thread, and super glue. As for food, we wanted to keep it simple yet filling, as we knew we would be burning a lot of energy day in and day out. We packed noodles, tuna, Ramen, potato flakes, Clif bars, Snickers, raisins and peanuts, and we tested a variety of energy gels and chews!

With all the preparation I was ready for the ultimate goal. On August 28 I was excited to embark on our adventure. It is a half an hour drive to Mike’s house in Gunnison, and four hours from Gunnison to the Denver area. We made it to the Waterton Canyon Trailhead at around 2:30pm. By 3:30pm, we were on our bikes. 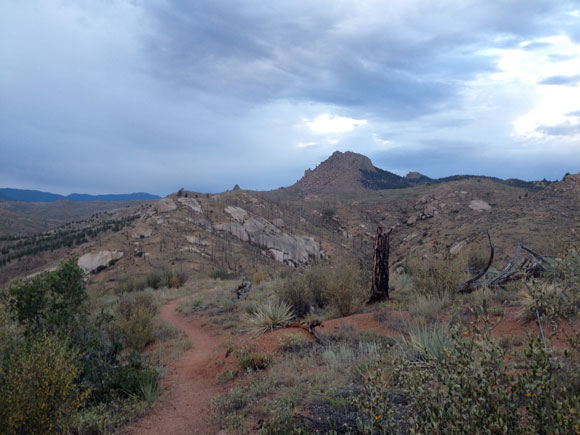 With the late start we knew we wouldn’t get too far but we still wanted to get some mileage out of the way on our first day. At this point we both told ourselves that 10 days was our goal but we really had no idea what to expect. Segment 1, Waterton Canyon, was not a very easy climb right off the bat with a lot of tight, steep switchbacks. After the initial climb, some great views, and a tight decent, we arrived at South Plate Canyon and filled up on water for the first time. From here there was a short climb as we entered Segment 2 and the site of the 1996 Buffalo Creek forest fire. What a bizarre sight! I tried to picture this place with a forest but another planet kept coming to mind.

About 20 miles in I heard a “huffing” noise. The sun was nearly down and I could not make out what it was at first, until out of the corner of my eye I saw a large black ball moving quickly. We had startled a black bear and her cub as they were feeding. They ran off, and we kept biking. Less then a minute later the two bears run right in front of us on the trail. We seemed to cut them off as the trail intersected their path! This was a very scary moment not only for us but the bears as well. We finally found a good spot for our first night, set up camp, cooked some food, and went to sleep.

Click here to read about the next leg of our trip.

Gear
13 Reliable, High-Quality Mountain Bike Products Designed to Last
Progression
How to Stay Strong in the Off-Season, Even if You're...
Gear
Best Mountain Bike Gifts Under $50
Gear
Why are Good Rain Jackets so Expensive? We had to...
Subscribe
Login
Please login to comment
11 Comments
Most Voted
Newest Oldest
Inline Feedbacks
View all comments

What an amazing trip, so jealous! Can’t wait to read about the rest of the adventure…

Cool
Can’t wait for the next installment!

Wow! I’m so excited to hear more about the trip! Something I’ve always wanted to do…

Can’t wait for the next reports.

I can remember nearly 20 years ago finishing a ride on the Durango segment of 1776 and seeing a couple of filthy teenage kids emerge from the woods on bikes with a bunch of gear, just having completed the journey from Denver. They looked around wide-eyed and hugged each other realizing they had finished the trip, and one of them mentioned “mom should be here soon to pick us up soon.” I was pretty humbled and hoped I could someday match their feat. I’ve yet to pull it off, but suppose I can live vicariously through these posts for a few days.

That’s awesome! I’ve been toying with the Idea of doing a bikepacking trip and now I really want to do one! I guess I’ve got to start route-ing one for Florida!

This sounds like it was an awesome trip! I can’t wait to read the rest of the trip report!

How much did your bike weigh? im contemplating on using my rocky mountain altitude but its 30lbs. feeling like that might be too heavy..

For a trip of this magnitude, I think stability, sturdiness and reliability are more important than weight (up to a point). I think an Altitude at 30# would be a fine mount.

It was pretty heavy, Although a carbon bike I think it was close to 35 pounds with everything on it. Bring more then you need and ditch stuff along the way 🙂

Good to see some White Sox fans out there! Just getting into bikepacking and this is an obvious bucket list trip.