This is a continuation of Neil’s Colorado Trail bikepacking trip report. Get caught up by reading about Days 1-3 here.

There were a million people jamming the Mt. Elbert trailhead area. Cars were squeezed in every spot possible. After a short climb we experienced one of the best downhill sections on the Colorado Trail down to Twin Lakes. We were blown away by the views, and spirits were very high! After that we ran into a super steep climb that never seemed to end, bringing us to our third detour of the trip. The Collegiate Peak Wilderness detour would take us into the town of Buena Vista. We hopped on highway 24 again and then a side road for a bit to avoid riding on the highway. We made our way into town after some punks sped past us as fast as possible while flicking us off. Some people don’t like bikers, bottom line. 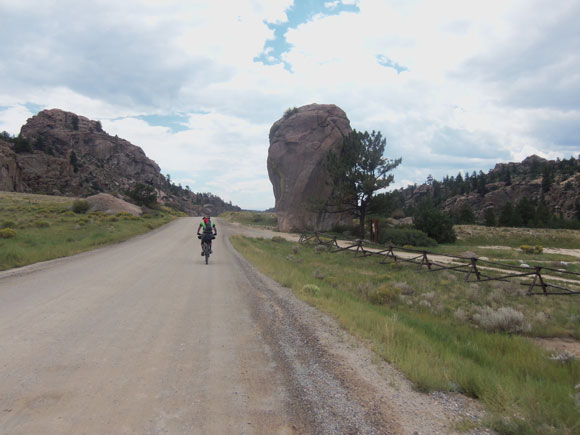 I stopped at a gear shop to pick up a dry bag since my saddlebag kept soaking up water. We also treated ourselves to a Backpacker Pantry meal and some other snacks. We then went to Poncho’s for a burger, fries, and milkshake, and then City Market for noodles and tuna. Getting back on the bike was tough after eating all that food. The climb up Cottonwood Pass was a bit demoralizing but we did it. After a short climb on the trail we contoured Mt Princeton until we hit a forest road that dropped us at Princeton Hot Springs. Mike and I got a few things at the general store, used the restrooms, and filled up on water. What a place–very ritzy but packed with people–they must be doing it right! We got back on our bikes and headed to Chalk Creek and found a campsite just south of the creek. It was another day in the books and 66 miles closer to our goal.

About 30 seconds after we got on our bikes there was a “Trail Magic” box–a Rubbermaid tub filled with sodas and snacks! We shared a soda and each grabbed an Easy Mac and crackers for the road. “Trail Magic” was such a simple joy for us along the CT. We were greeted with a nice hike-a-bike soon after, followed by a sandy but flowy flat section. After that, several very quick steep climbs, some hike-a-bike, others rideable. Sometimes I thought to myself “why is the trail going this way?” Mike was dealing with his rear tire losing air and was constantly pumping it up but we kept pushing on while monitoring the tire.

We started to see a lot of people just before the Shavano trailhead, which was a welcoming sight. Just after we passed the Shavano trailhead we ran into another Mike. Mike was also thru-biking the CT and said he had been on the trail for 10 days now. He was a funny, older, typical California Surfer dude. It was good to talk gear and about the miles behind us. He was definitely taking it easy, 20-30 miles per day max. We said our goodbyes and continued to a short climb over a ridge, past some ninjas training, and down to highway 50.

After crossing the highway, we started our long and steep ascent to the Monarch Crest Trail via Fooses Creek Trail in Segment 15. Mike and I rode the Monarch Crest Trail last year and we both travel over Monarch Pass a few times a year so we felt a little at home here. On the map, the Fooses trail looked burley but almost all of it was rideable until we got 200 feet from the ridge.

Of course, perfect timing. A storm rolls in and it was hard to tell if it was passing to our north as the ridge was blocking our view west. We discussed our options, but as always we said, “we need to keep going.” We got to the top after probably the steepest hike-a-bike section on the CT and see the storm is just to our north but seems to be heading our way. We remember seeing a little shack on the trail last year so we rode there and waited for the storm to pass. 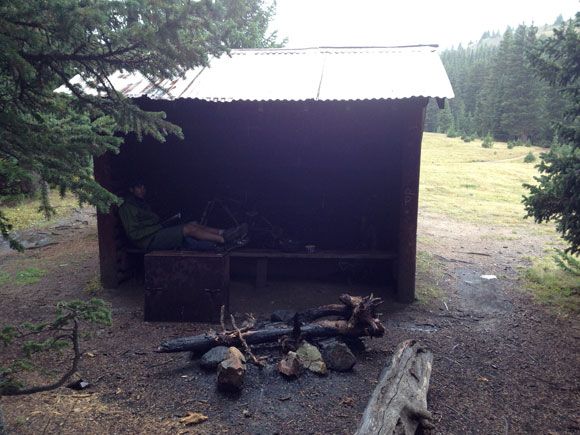 The storm held off for a while but it looked like rain would be in the forecast for the rest of the day. We left the shack and got to Marshall Pass as the rain really started to come down. We took cover under the bathroom shelter until the rain let up again. Back in the saddle and onto Segment 16, we continued until we hit Tank Seven Creek. We were riding in the dark with headlights which was a little frustrating but we were happy to see running water and a campsite. Here we ran into a couple that was also thru-biking the trail. Always nice to see other people, we chatted about the trail and what lies ahead and said our goodbyes. Day 5 was tough with weather and mechanical issues but we were half way home! Mike and I went to bed happy campers with 46 miles on the day.

I woke up at 4am to rain pounding the tent. We slept until about 6:30am because of the late arrival the night before. We knew we were in for a rude awakening by way of Sergeants Mesa. A Colorado Trail Race finisher told Mike that Sergeants mesa “will end eventually.” Was it ever rocky! 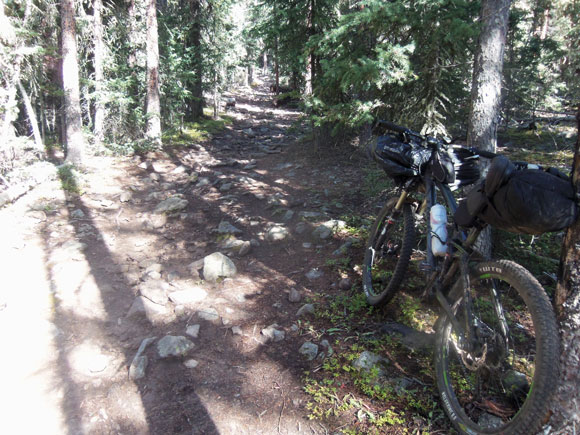 It is frustrating when terrain is flat enough to bike but not bikeable. Some sections were bikeable but we were on and off our bikes constantly. After the rocky section came a few power climbs then a long decent to Hwy 114. Mike had called his boss the day before to set up a re-ration, which included: a Subway Footlong, noodles, potato flakes, GORP, Snickers, and Clif bars. If we were doing the Colorado Trail Race this would not be allowed but we were not, and we enjoyed every single bit of that footlong sub.

After packing up our food we hopped on the bikes, filled up on some sketchy cow poop water, and watched another storm roll in. After a short climb and a quick dump of hail and rain we got to what we joked was the best section of the trail: Segment 18 contained pure doubletrack downhill. We quickly descended to our fourth detour of the trail. The La Garita Wilderness Detour was a long one, about 55 miles long. The detour traveled on relatively flat forest roads past ranches and farms. We did 24 miles of the detour that day and made camp once the sun went down. Day 6 started hard but gradually became very easy, 62 miles on the day.

View photos from the trip here and check back tomorrow to read the continuation.

Seems like you guys ran into a lot of rain to this point. Guess that was to make up for the drought earlier in the summer. 🙂

I remember someone pointing out that Fooses Creek section of the CT near Monarch Crest and I was thinking there’s no way I would ride up that. At least it sounds like the part near the top of the ridge was the worst of it.

Bottom line the rain was so difficult to deal with, very frustrating.

We even spoke to se people going down fooses, they said they had to hike down the steep top section!

I’ve never been up on the Crest without hitting weather. Once rain, snow, sleet and hail all in the course of a single ride. Didn’t seem to slow your pace much though–good job!

Yeah, you guys are covering a TON of miles each day! What a rocking trip!

It was suprising how far we went some day’s, having all day to bike really helped!

“We said our goodbyes and continued to a short climb over a ridge, past some ninjas training, and down to highway 50.”

Haha i should have poste that picture, but yes random guy and girls in white ninja robes andblack belts on! Not sure if that means anything!

You’re lucky they let you live! 😆

You don’t mention lightning, but I know that’s a mid-afternoon hazard up high. Did you take shelter for that, or was lightning not a factor?
Great trip report, thanks for this.
Cheers
Barry

Yes that’s why we took shelter! just cause we had a small climb left and were above tree line during a pretty nasty storm!