This is a continuation of Neil’s Colorado Trail bikepacking trip report. Get caught up with part I here. 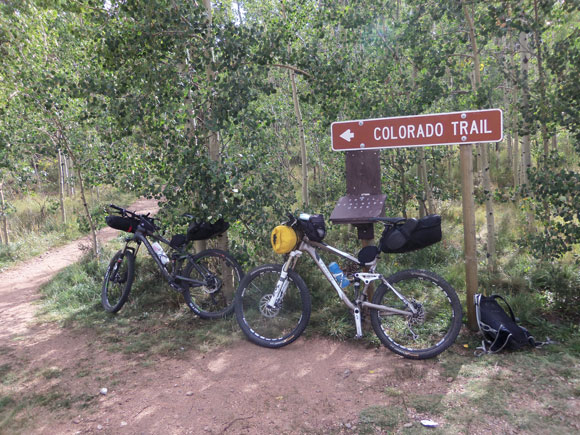 We got an early start at 6am, just as we would the rest of the trip, and caught a great sunrise. The first part of day one was pretty fun with a mainly flat, flowy yet sandy section. We continued through the Buffalo Creek burn area and proceeded onto some great trail on Segment 3 at Little Scraggy Trailhead. We rode across Colorado 126 as the temperatures really started to rise. Segment 3 was so much fun we contemplated doing some Buffalo Creek side trails but we passed on the idea.

At this point we started talking about the bike detour around the Lost Creek Wilderness; the Guidebook suggests going 70 miles out of our way to Kenosha Pass but the CTR route bypasses through the town of Bailey and up US 285 to Kenosha. We decided to go to Bailey, as we wanted some snacks and didn’t want to waste our legs on 70 miles of forest roads. A strong but brief storm system came over us while biking Wellington Lake Road toward Bailey.

We made it to the Conoco off US 285 and I enjoyed some milk, beef Jerky, and Pringles. I kept thinking to myself before the trip how I would love to bypass via Bailey because of time, but at this point all I could see was 18-wheelers flying by on highway 285 with little to no shoulder for us to bike on (the first section from Bailey past Santa Maria camp had no shoulder at all.) I was just waiting to get hit from behind and fly over the guardrail. Mike was used to highway riding since he biked from New Hampshire to Oregon last summer on his road bike. I, on the other hand, was biking as fast as I could to each shoulder section. In the end we made it to Segment 6, Kenosha Pass, and continued to bike until we were exhausted. We camped not far from Jefferson Creek right before the Georgia Pass climb. 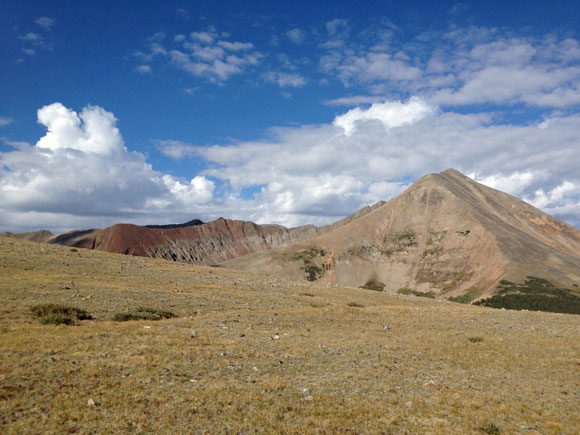 We started with a nice steady climb up Georgia Pass with some fantastic views. The climb was easier than the descent as the rain from the previous day had soaked all the rocks. The second climb of the day was much steeper and brought us through a pine beetle infested forest. From the top we could see parts of Keystone resort and proceeded to a very fast and fun downhill. We saw a lot of other bikers, a welcoming sign, as we we approached Breckenridge. After a few more ups and downs and a wrong turn, we made it to Breckenridge.

We took the town recreation path up to Windy City Pizza, a cheap all-you-can-eat Italian buffet. We resupplied on food, snacks, and water and were quickly on our way again.

Once we got to the start of Segment 7, the Gold Hill Trailhead, it started to storm on us. Thunder, lightning, and pouring rain. Mike insisted we make a shelter out of his tarp, so we did. We took shelter for about an hour and the rain was really coming down during that time. The shelter kept us warm and dry but precious time was being wasted and I would later regret it.

We left the shelter at 4pm with the rain still coming down and the trail was turning into a creek. It was slow going and we had about 5 miles to the summit of the ridge. We finally got over the first saddle and were relieved; we thought we had made it. With the sun going down and clouds blinding our views, all we could do was stay on the trail. Unfortunately, we still had 2.5 miles to the actual summit of the ridge.

This was probably the scariest moment of the trip and it could have been totally avoided had we continued biking without taking shelter. When we finally made it to the summit, it was dark. The slow, wet decent in the dark with our headlights was a first for both of us. We were very cold and anxious to set up camp and eat. After 4 miles of descending we found a great campsite about a mile away from Copper Ski Resort. As I unpacked, I discovered that everything I needed to stay dry had gotten wet. Frustrating, but what a day it was! 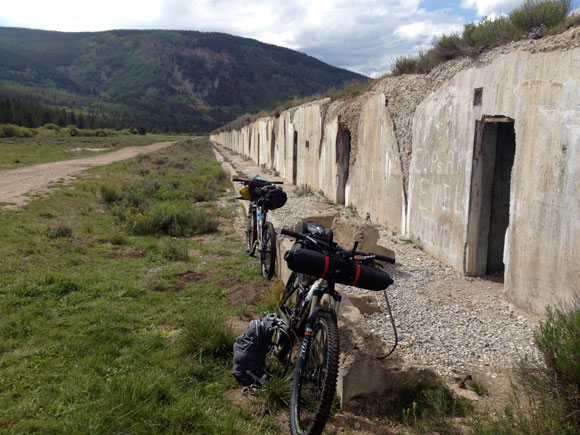 We woke up cold and all of our belongings were wet from the day before. Every night on the trail I slept with my sweaty and wet clothes in my sleeping bag as my body heat would usually dry them and keep them warm. But not this time–everything was just as wet as when I went to bed. To make it feel even colder, we were in the shade until we got to the gas station near I-70 in Copper where we basked in the sun, used the bathrooms, ate some food, and laid out all our wet stuff on the pavement to dry.

After a while we packed up and were on our way to Segment 8, which starts at Copper Mountain and goes under the ski lifts. The trail continued with a stout climb of 2,200 ft over 10 miles. This would be a very productive day but yet again, we needed to beat the rain over both Searle and Kokomo passes.

We ran into our first mechanical issue, which fortunately was pretty minor. Mike’s clip on his shoe kept popping out of the pedal so we turned his pedal tension all the way up but the clip would still pop out without effort. We determined it was the clip and there was nothing we could do until we got to a bike shop.

It was slow moving up to each of the passes. The trail was not very biker friendly and Mike and his pedal were not getting along. We made it to Searle Pass just in time for a nice thunderstorm. Once again, we biked as fast as we could to get over the ridge to Kokomo Pass; another scary moment, but not nearly as bad as Gold Hill. We stopped and took some pictures at Kokomo and started our long decent to Camp Hale. We did not notice Camp Hale until we passed it as it was hidden well. We went back to check out the barracks and took some photos. It was a very bizarre looking structure that held troops that were training with the 10th mountain division in the early 1940’s.

We continued on the trail until we hit highway 24. Here we would reach our second bike detour. The Holy Cross/Mount Massive Wilderness detour brought us up and over Tennessee Pass and into Leadville. It was 5:00pm when we got into town but we still wanted to get to the Elbert Trailhead to camp for the night. We stopped at Safeway for noodles, tuna, potato flakes, and snacks. We then headed to the bike shop where Mike bought a set of new Shimano clips, and on to a burger place for a large greasy burger, fries, and a milk shake!

We left Leadville around 7:00pm for Halfmoon Creek Road and ultimately the Mt. Elbert/Mt. Massive Trailhead. It was the Friday before Labor Day, and man was it a party! The campsites were packed full of people enjoying the holiday weekend. It felt so good to make it to the Mt. Elbert trailhead and the bike shop guy told us the next section is a lot of fun. We went to bed happy.

A bad day on the trail always beats a good day at the office, right? Ok, maybe not if you’re riding through a wall of thunderstorms but I guess that’s part of it when you’re on a multi-day trip like this.

“The slow, wet decent in the dark with our headlights was a first for both of us. ”

So, neither of you guys had been night riding before? What type of lamps were you using?

Used a black diamond spot 90! It was super bright. I haven’t gotten into night riding yet so it was pretty new to us. Mike had a older light that didn’t work as well as mine!.

90 lumens isn’t a lot for night riding so I can see why you were riding slow. And as Dustin mentioned, night riding in the rain is even harder!

Probably haven’t been night riding in the rain before. It’s hard to see, a lot of your light bounces off the water droplets and back at you. Kind of like driving through a thick fog.

Wow–those are some big days!

“Segment 3 was so much fun we contemplated doing some Buffalo Creek side trails but we passed on the idea.”–that’s one reason I’ve never taken on such an undertaking; I’m too easily distracted!

“but at this point all I could see was 18-wheelers flying by on highway 285 with little to no shoulder for us to bike on”–another reason I’ll never take up such an endeavor; my bike is allergic to both pavement and I to high speed traffic.

haha Mine too! just so happens it had to be done!

I’ve tried descending with a backpacking headlamp before… not fun! Like Jeff said, 90 lumens isn’t a lot. Most people who night ride use at least 1000. My light goes up to 1,500, and some lights out there go as high as 3,600.

yeah no Bueno! We both talked about getting room at Copper Mountain Resort as we were drenched and even worse my down sleeping bag was soaked! I’m glad we didn’t

I felt like the head lamp was bright enough for the slow decent, sure it could have been brighter. If i end up doing the Arizona Trail Race / CTR I’m probably going to get a brighter head light as I will be biking thru the light! any suggestions??

That’s a tough one because you need something that uses replaceable batteries and is lightweight. I think some of the Niterider all-in-one lights go up to 200 lumens and you can use them with AAs. Yes, 200 lumens isn’t a ton but I’ve been known to do night rides with just a 150 lumen light. It’s not like you’re going to be tearing ass at night anyway… just slow and steady to cover the miles.

Darn day job. 🙂 I take it back, that sounds like more adventure then I would well enjoy. I’m content to live vicariously through you.

A “great” start to your adventure! (Great because it makes for a great story :D)

Great article. I’ll definitely read the others as I get time this week. Thanks for sharing!

Hey man, just wondering if you knew of a place/website that synced people up that were planning on doing it solo with another rider looking to do it around the same time period.