Here in central Pennsylvania, we’ve been in a deep freeze lately, with temps regularly dipping below zero at night and barely creeping out of the single digits during the day. While the frigid air adds many challenges to even the easiest of rides, it also allows for the opportunity to explore new corridors normally impassible by bicycle, such as frozen lakes and rivers.

One of our local waterways, Standing Stone Creek, has been on the to-do list for a while. It’s very rare, however, that the small, moving stream freezes consistently and solidly enough to ride a bike for any considerable distance on its surface. This past week, it finally happened. After some preliminary scouting, a small group of us decided to make the Creek the venue for our weekly Wednesday night ride, with the intention of exploring how far upstream we could make it before thin ice or otherwise dangerous conditions would force us to turn around. 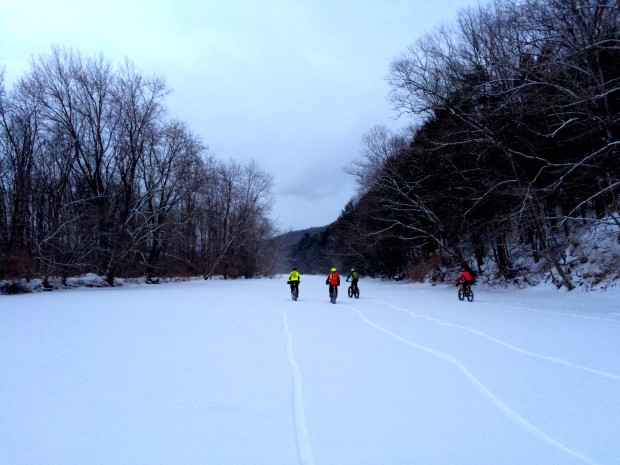 Five of us left downtown Huntingdon shortly before dark, and soon found ourselves experiencing the surreal feeling of riding upstream on the snow-covered ice, enjoying this seldom-seen perspective of the waterway and its surroundings, the wind kicking up snow tornadoes in front of us. The ice was covered in a layer of snow, which provided ample traction, even without studs. Creekside cliffs held large, frozen waterfalls that were the object of much fascination.

The ice was a lot more solid than I had expected, and we ended up riding about five miles upstream, which was much farther than I ever imagined we would. There were a few sketchy spots–visible open water always made my heart beat a little bit faster, and every now and then, the top crust of snow would crack, sending us pedaling for our lives until we realized there was still a solid layer of ice underneath. 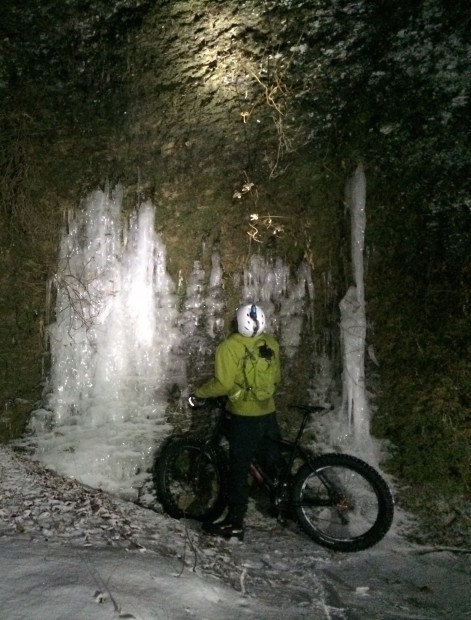 It was finally the cold, and not the ice conditions, that forced us to turn around. The temperature had dropped drastically in the couple hours that we had been out, and without any climbs to get the blood flowing, the air felt especially chilly. We’d been cautiously picking lines on our way upriver, going slow, unsure of conditions around each bend. On our way back downstream to town, we were more confident in the safety of the ice, and we made considerably better time as we retraced our previous tracks and hightailed it back to warmth.

Riding on the ice is a really fun and unique experience, but it’s also inherently dangerous. Check the ice thickness whenever possible and don’t venture too far from shore until you know it’s safe. Newly-formed ice is usually stronger than old ice, and ice thickness can vary considerably within a small area, especially on moving water. Be alert for any cracking or signs of weak ice, and don’t venture into unexplored territory alone. It’s also a good idea to bring a throw bag and/or ice claws in case of an incident. Bring extra clothes in case someone gets wet. Wearing a PFD may also be a good idea in certain circumstances–it’ll keep you warmer as well. Above all, just be cautious, and use common sense to ensure a good time for all.

Gear
27.5+ Tires: These Are for Your 29er
Community
News: Race a Fat Bike in NC Without Freezing Your...
Trails
10 of the Best Fat Biking Trails in the US...
Trails
Adventurer Kate Leeming on Planning a Cross-Continent Bike Expedition [Podcast...

Gear
This Gift for Mountain Bikers Will Knock Their Socks Off
Gear
Why are Good Rain Jackets so Expensive? We had to...
Gear
Our Favorite Mountain Bikes of 2022, And All the Rest...
Gear
How Fat is Your Seat Tube?
Subscribe
Login
Please login to comment
2 Comments
Most Voted
Newest Oldest
Inline Feedbacks
View all comments

I always thought it would be really fun to fat bike on a creek up through the woods. Thanks for sharing, and thanks for the tips!