Building a mountain bike trail 50 minutes from Asheville is a bold move. Don’t get me wrong – I’m all for new trails, but any new digs in this neck of the woods are going to face some stiff competition from the existing options. Let’s imagine you’re right smack in the middle of downtown AVL and you get the urge to go for a bike ride.

Twenty minutes south and you’re in Bent Creek. Ten more minutes will put you in Mills River. Another ten opens up the incredible trails found in Pisgah Proper (stay tuned for a forthcoming article on the garnliest four). Other options in this direction include the Green River Gamelands trails and the incredibly popular DuPont State Forest, which are both about 50 minutes away from Asheville. If heading south isn’t your thing, 30 minutes north is all it takes to get to Big Ivy, while 25 minutes east puts you in Black Mountain for well-regarded commodities like Kitsuma and Heartbreak Ridge.

The point is, while the Weed Patch Trail is an obvious choice from the Chimney Rock/Lake Lure area, it takes something special to lure traffic from the region’s other hotspots. Fortunately, at least in my humble opinion, Weed Patch has this special sauce.

I underestimated the Weed Patch Trail from the beginning. A cursory search on the Singletracks database showed it was a 10 mile out-and-back trail, which I hurriedly read as 10 miles total. I was mistaken. I met my friend Ryan at Buffalo Creek Park at 7:30am, thinking it would give us “plenty of time” to complete the ride and get him to work by 10. Ha ha. 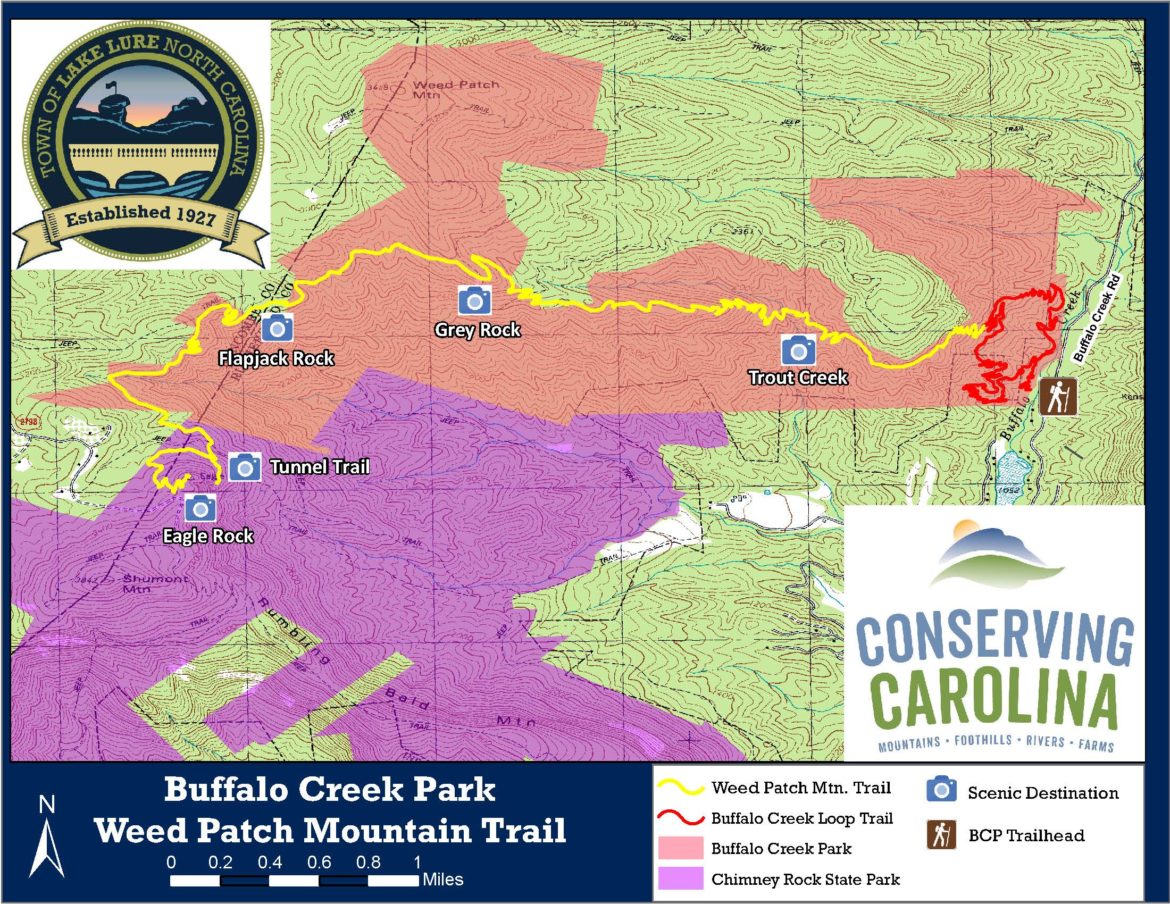 Weed Patch begins as part of the Buffalo Creek Loop Trail, which totals 3.5 miles and alternates direction each day depending on your mode of transportation. Presumably the goal is to have bike and foot traffic pass face-to-face instead of bikers coming up behind hikers. While I followed the instructions and rode clockwise with minimal grumbling about being told what to do, in all honesty it seems as though both directions will be equally fun on a bike. The trail is smooth and fast, with steep switchbacks backed by big berms for descending.

After 30 minutes of climbing, a gain of around 350 vertical feet, and less than 2 miles to show for it, we arrived at the junction between the Weed Patch Mountain Trail and the Buffalo Creek Loop Trail. It was here that I realized my hasty timing estimates from the night before might not be 100% accurate.

As we pushed stoically on, we were rewarded with thoughtfully constructed trail features that were a step up in difficulty from the loop trail below, along with one or two that were downright difficult to clean.

While Weed Patch is a young trail, it appears to be built to last, with features such as water bars promoting drainage. It also incorporates plenty of rock armor designed to keep high traffic areas intact.

The usage of rock features isn’t particularly surprising since rock is plentiful in the area. In fact, the vast potential for both beginner and advanced features is something I’m most excited about for the new trail system.

For now, though, the full length of the Weed Patch trail is probably best left to more advanced riders. It might not be the most technically demanding trail around, but I can attest that it will put a cardiovascular hurting on the unsuspecting rider. By the time I arrived at the Eagle Rock summit at 3,380 feet, I had been riding for three hours. The descent took another hour and twenty minutes, totaling a 20-mile effort that Strava deemed “historic,” based on my typical, apparently lackluster exertion.

Fortunately, if you’re willing to grind your way to the top, the views are well worth the climb. Be careful if you decide in your delirium to climb on top of Eagle Rock — some sticky rubber will come in handy here.

I’ve heard that people do shuttle this ride, but after some rudimentary logistics research via Google Maps I don’t think I would recommend it. Coming from Asheville, you double your driving time while cutting your mileage in half, which is a trade I’m probably not willing to make. Besides, it wouldn’t feel right to start with the view.

Ultimately, the Weed Patch Trail is just part of the plan for a 100-mile Hickory Nut Gorge State Trail network. For everyone who enjoys being outside in the mountains, this network will be a fantastic new source of recreation and enjoyment. I’m personally excited to enjoy it from the vantage point provided by two wheels.