What happens when some plant/eco nerds propose a six-hour, slow-as-molasses-in-January bike ride on fire roads to look at wildflowers?  The thing sells out in ten days. Lent a little star power by the kindly presence of Joe Breeze, the second annual Wildflower Ride on Mt. Tam in Marin, CA was a smashing success and shows that people are hungry for knowledge of the environments they wheel through. 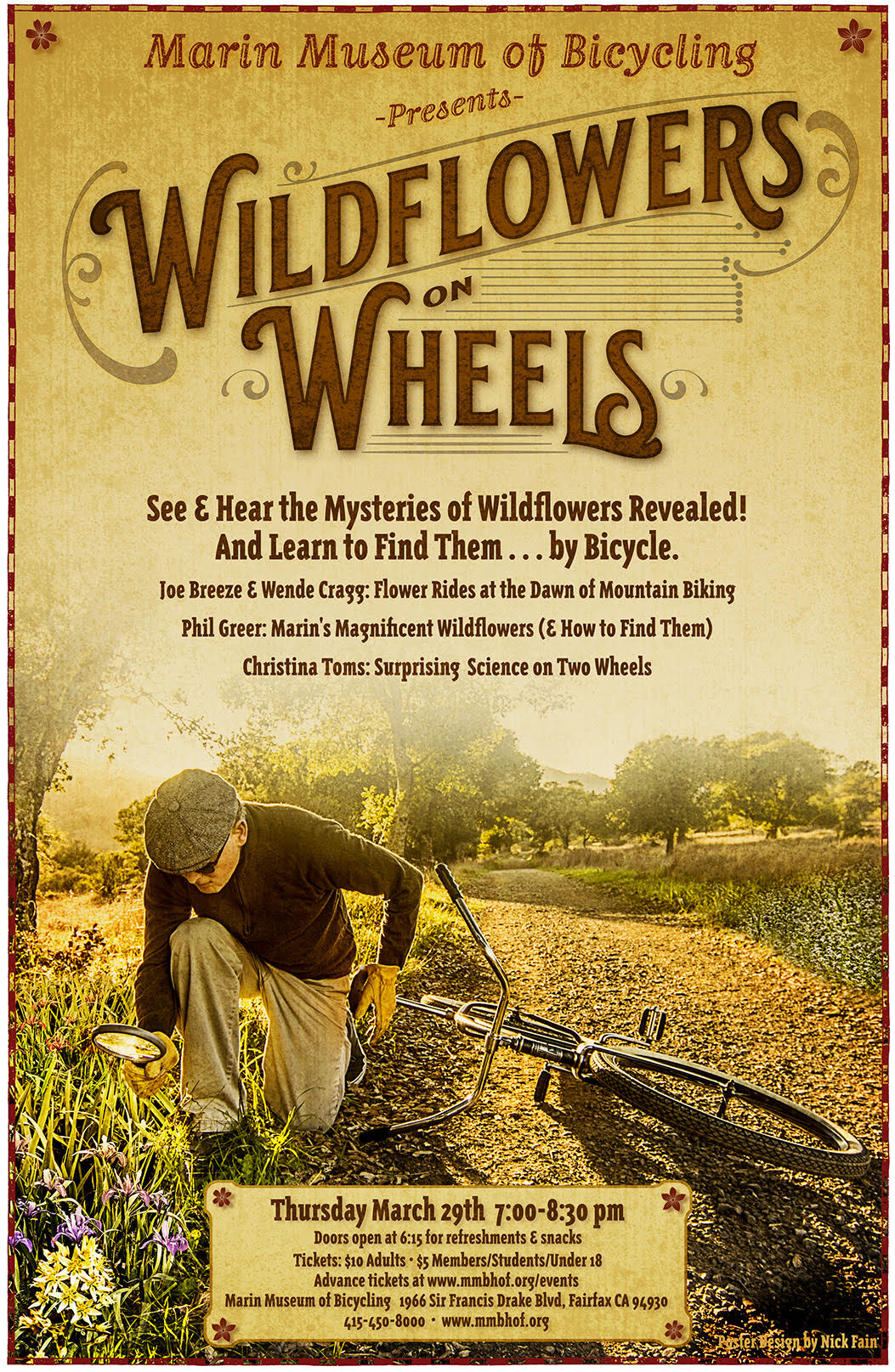 I missed the innagural Wildflower Ride on Mt. Tam in 2017 and I never heard the end of it.

“Did you go on the Wildflower? NO? It was really cool.”

“You missed it?  Seriuosly?”

Then I started overhearing it in random places. On the ferry, in the maple syrup aisle at the grocery store—little wafts of words floating up and feeding my FOMA. So this time when organizers at the Marin County Bicycle Association asked for ride assistance my hand shot up like a rocket, like that goobery kid in the front row, squirming in her seat shouting “Pick Me! Pick Me!” Of course this was while I was sitting solo in front of my computer, which reminds me I need to cover the camera so those spying on me don’t think I’m a weirdo.

Eco nerd and California Native Plant Society (CNPS) member Christina Toms rounded up a few fellow science-y bikers as ride leaders. The previous days rains woke the seeps, creeks and cricks and thus the mountain appeared to have sprung multiple leaks. A hundred and fifty yards in, we arrived at our first stop, a fern grotto supported by a water source that blew our ride leader’s mind.

“My geologist friend told me that hydrostatic pressure coming through these deep fissures in the underlying strata mean that this water we see here could be coming from hundreds of miles away. This very water! Hundreds of miles!!” She pantomimes the explosion of her helmeted head and we move to the next stop.

Another quarter mile up the fire road, we huddle and take turns peeking into a small red rock cove at a shy, shrinking violet who was surely mortified at our obnoxious intrusion. (It probably wasn’t actually a violet, but I couldn’t resist the phrasing.) Bruce Homer-Smith, committee chair at the Marin chapter of the California Native Plant Society would inform us throughout the day about the flowers we were seeing, and why we saw them where we did.

With 20 miles of riding and 3,000+ feet of climbing, this was no slouch of a ride. In fact, when Ms. Toms reported that last year they finished at 6:00 p.m., after a 9:00 a.m. start, I must admit it gave me pause. For some reason, I always find myself more exhausted from a stop-and-start, slower-than-normal pace than I do from a long, steady, sustained effort. After three hours of petal peeping, we arrived at Potrero Meadows, a lush bowl of green near the top of the mountain.

Marin Municipal Water District Ranger John McConneloug (brother of Olympic mountain biker Mary McConneloug) met us for lunch, and it was a delight to hear his stories of the mountain, and to chat here on friendly footing. Ranger McConneloug is easy and knowledgeable, a respectable rider to boot, but he will also write you a ticket for an infraction faster than you can say ‘Birthplace-of-Mountain-Biking.’

I was particularly inspired by the group’s obvious desire for and appreciation of nature. While this year’s crowd of 50 was on the grayer end of the spectrum, last year’s was dominated by riders in the NorCal high school league. The teens so often derided as “tech zombies” or entitled brats (okay, well, it is Marin…) reveled in the Latin, the common names, the tricked out features and functions of these fancy flowers. Some even asked if there could be a geology ride sometime soon? 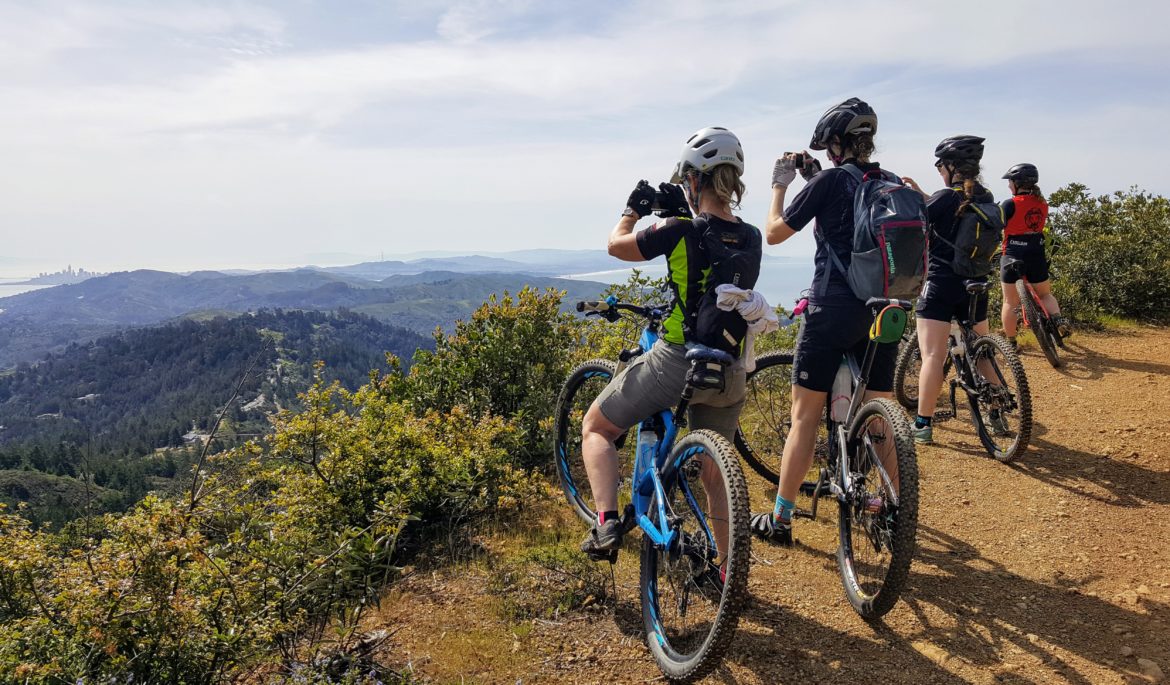 Mountain bikers can be nature nerds, too

A lecture on the Wildflowers of Mt. Tam preceded the ride on a Thursday evening at the Marin Museum of Bicycling in Fairfax, and this too was well attended. And these numbers reinforce my oft-repeated refrain, particularly in the context of trail advocacy, that mountain bikers are “environmentalists” too. That riding a bike and being a nature nerd are not mutually exclusive. So if your local club or coalition is looking to reach a new or different audience, try hooking an expert on a topic that can be explored by bike. A geology, history, birding, or riparian roll might have the side benefit of breaking down perceived (or real) barriers between user groups.