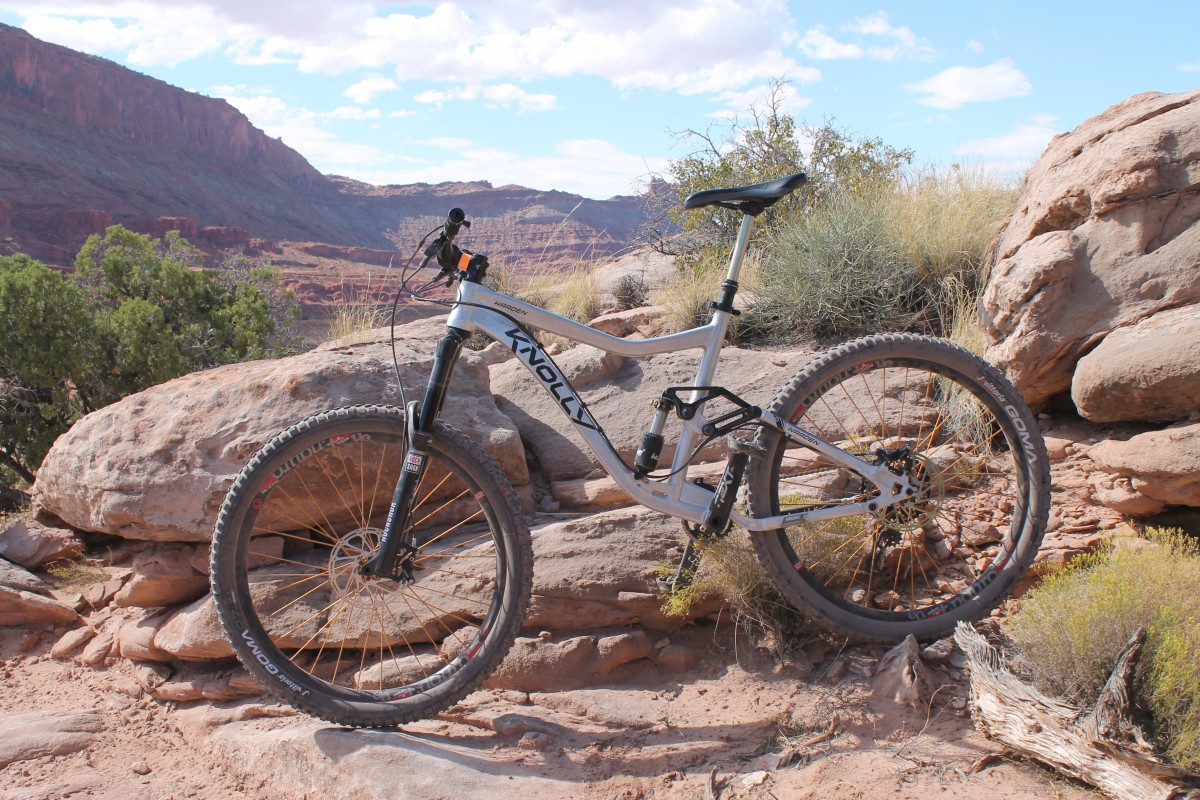 I have always found Knolly to be an intriguing brand.  Between their reputation for hardcore durability and their unique Four by 4 suspension design, they always seemed to be a brand I would take to, even as they became somewhat archaic by modern standards, sticking with aluminum and eschewing the trend toward racing to be the lightest in every category, in favor of maintaining their stable of bombproof bikes.

Despite my interest, my one and only experience on a Knolly was a brief swap onto the one-size-too-small, 26”-wheeled Endorphin I picked up as a demo for my son during one of our mountain bike vacations, which was in no way adequate to get a feel for a Knolly.  So, as I strolled through the tents at Outerbike, having finished my list of “must rides,” I spotted a rack full of Knollys, just waiting for me to give them a fair shake–so shake one I did.

Actually, Knolly themselves weren’t at Outerbike, and these bikes sat under the tent of venerable wheelmaker, Industry Nine. While Knolly is a North Shore Brand and I9 resides about three thousand miles away in Asheville, North Carolina, they seem to be kindred spirits, each embracing very rugged terrain as their primary stomping grounds, so unlike so many matches of convenience we see in the industry, this one appeared to be borne more of genuine compatibility than strict business planning. I9 wanted to best rigs possible to show off their reportedly bombproof wheelsets. 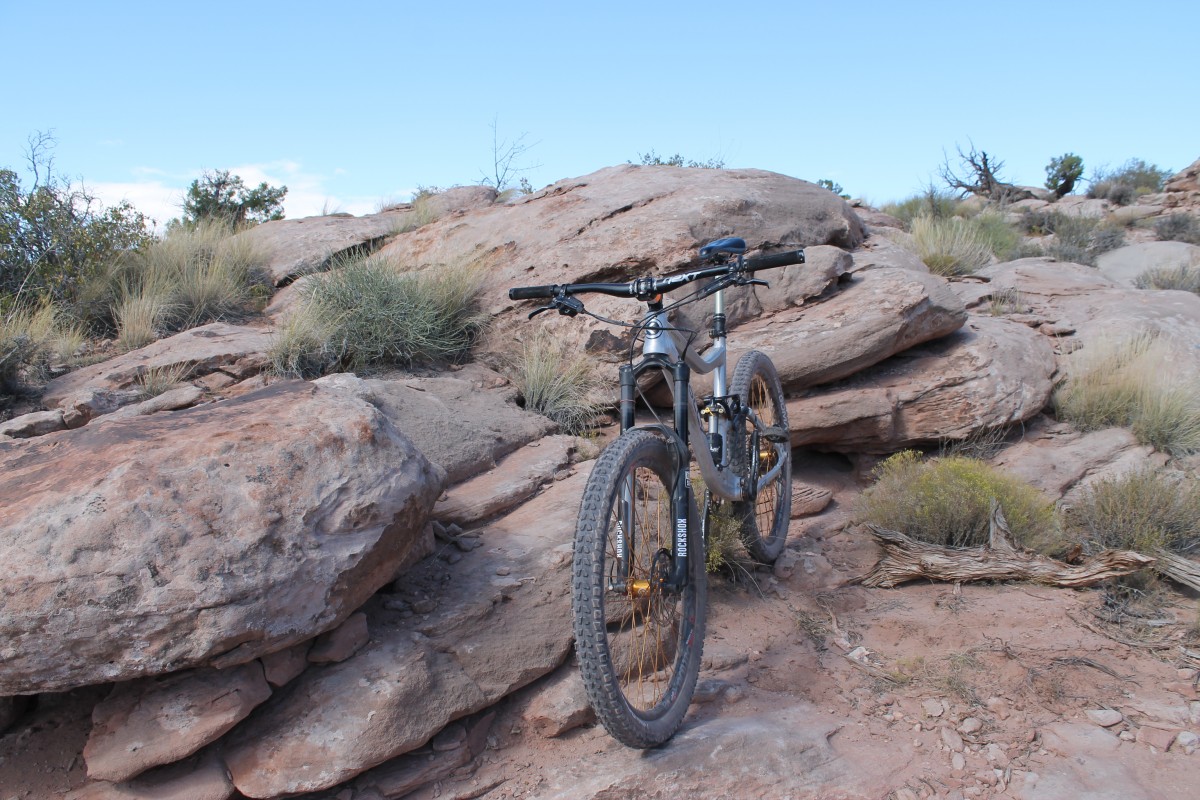 I picked up a Knolly Warden fitted with a set of I9 Enduro wheels, both of which were in for a real test.  Late in the day on the third consecutive day of hard riding is not the best time to go charging out on a relatively heavy all-mountain/enduro rig when there are plenty of screaming light bikes sitting in other stables.  But in the interest of both personal curiosity and the desire to bring Singletracks readers a report on a bike which has, to date, received little ink despite its loyal cult following and its promise as a rugged rig for the rough rider.

The 27.5” wheeled Warden is designed to be a take-no-prisoners, all-mountain, enduro bike for the aggressive rider more concerned with hard charging than being svelte.  Interestingly, the Warden frame offers only 150mm of rear travel rather than the customary 160mm found on the most competitive bikes in the category.  How could the supposedly gnarliest company in the niche be shortchanging its loyal followers by 10mm?  I would soon find out. 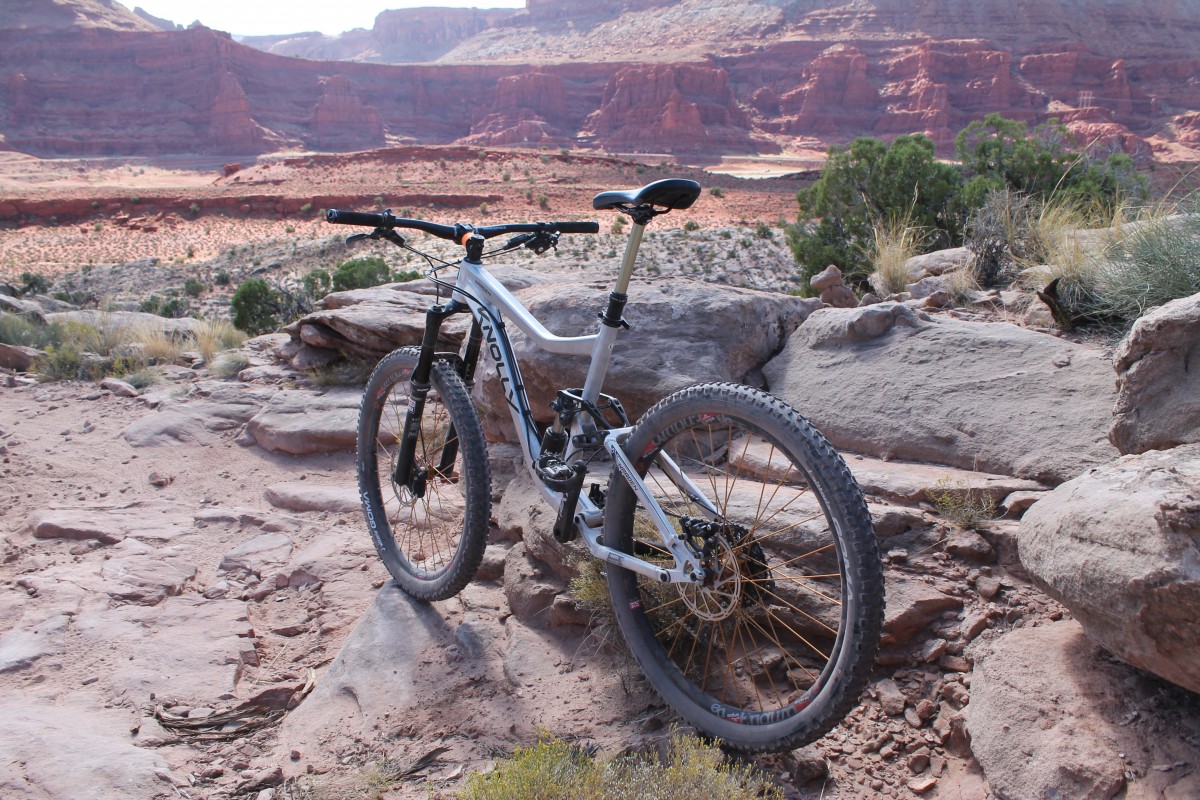 The suspension on the Knolly was rounded out with a Cane Creek DBInline shock in the rear and a RockShox Pike up front.  While I’d spent plenty of time on Pikes recently, the rear shock was new to me as well. After a brief setup in the I9 tent, I was headed for the trail to get impressions on a whole array of new goodies.

Pedaling out the EZ trail at the Brands Trail system was certainly less fun than doing it on a 19lb hardtail, but that’s not the point of the Warden, and it certainly wasn’t as onerous as it could have been.  Once up on Deadman’s Ridge, though, the Warden really earned its keep for my enthusiastic, but nearly-exhausted self.   The climbs were surprisingly easy, although the rather slack 65.5 degree head angle did promote some front end wandering.  When in the very tight, uphill rocky bits, some ratcheting was also required to avoid some unwanted pedal strikes.  Overall, though, the suspension kept the bike in perfect contact with the challenging surface, perfectly taking the edge off of hits of all angles, but without losing the feel and flow of the climb. 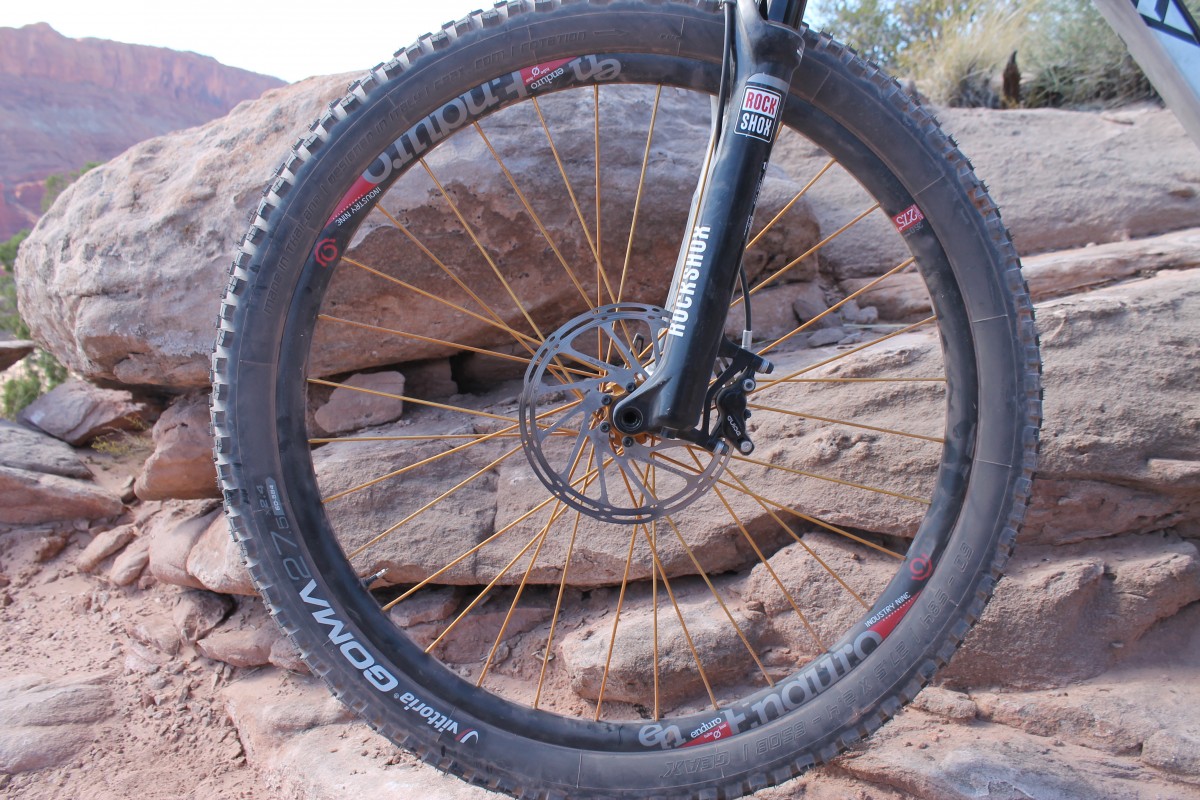 The Industry Nine Enduro wheels also proved to be a star in this singletrack show.  Long known for their durability (some downhill racers use the I9 enduro wheels, which is quite a testament to their sturdiness), the I9s hooked up better than any wheels I’ve ridden.  With engagement points every three degrees, meaning 120 engagement points on every rotation, the rear hub hooks up quickly and smoothly at any point in a pedal stroke, a characteristic which was particularly welcome on Deadman’s Ridge, with its quick changes in direction, rocky lines, and sharp uphill pitches.

Upon turning the Warden downhill, I learned quickly that the 150mm of rear suspension was plenty.  I often hear of bikes which claim to have “bottomless suspension,” a claim I generally find to be bunk.  At 200lbs, I bottom out just about any bike pretty regularly; the only way I avoid this is to load up so much pressure in the shock that I may as well be riding a hardtail.  All that changed on the Warden–I finally understood what a truly “bottomless suspension” felt like.  The suspension ramped up smoothly and soaked up everything I could throw at it without ever actually reaching my backside.  That 150mm felt like significantly more than any of the 160s I’ve tried to date. 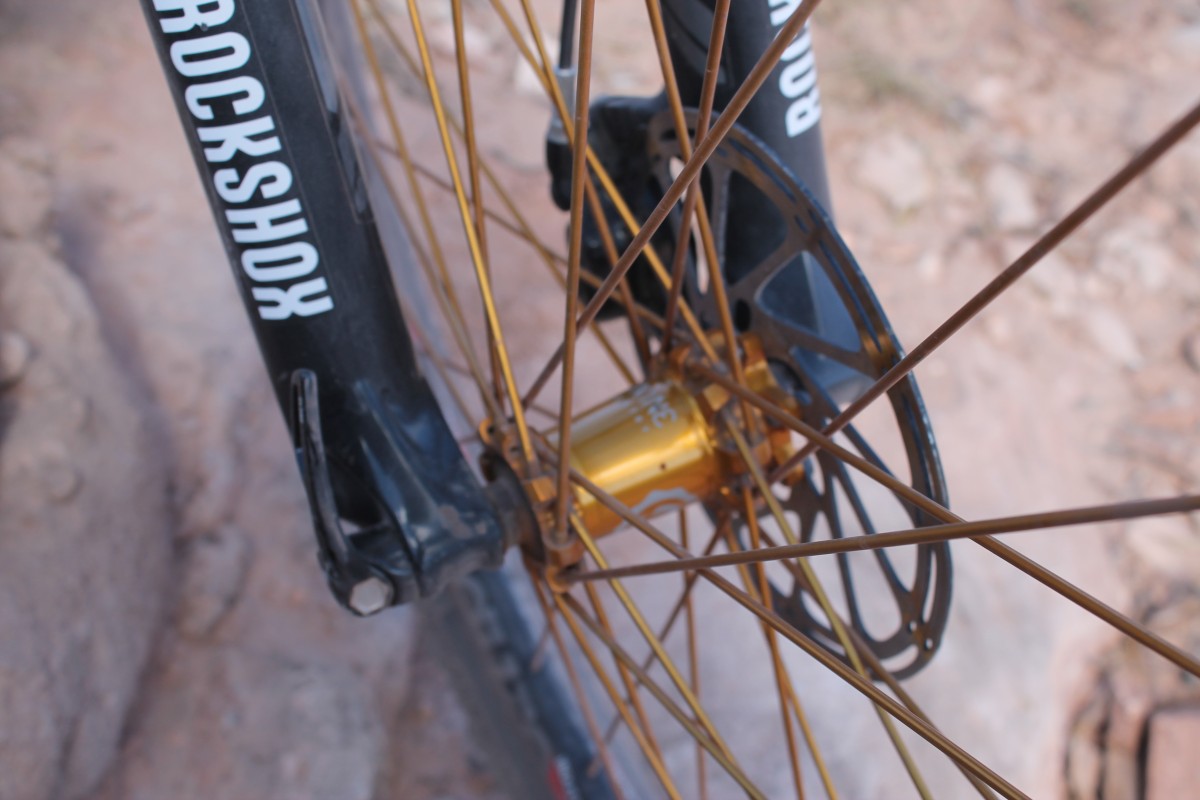 As for those I9 Wheels on the descent, they proved to be as solid as they were on the way up.  I9 claims the aluminum Enduro wheelset to be as stiff as any carbon wheelset and, while I can’t claim to have any objective measures to verify this, I can attest that I was unable to get them to flex no matter how many gees I put them through.  They are made with a proprietary ultra-stiff spoke that gives them tremendous rigidity.  The I9 Enduro wheelset retails for an equally stiff $1,210, but at only 1,610g/pair for a downhill-worthy wheelset with carbon-like performance, the I9 enduro is definitely on my shortlist for new enduro wheels. 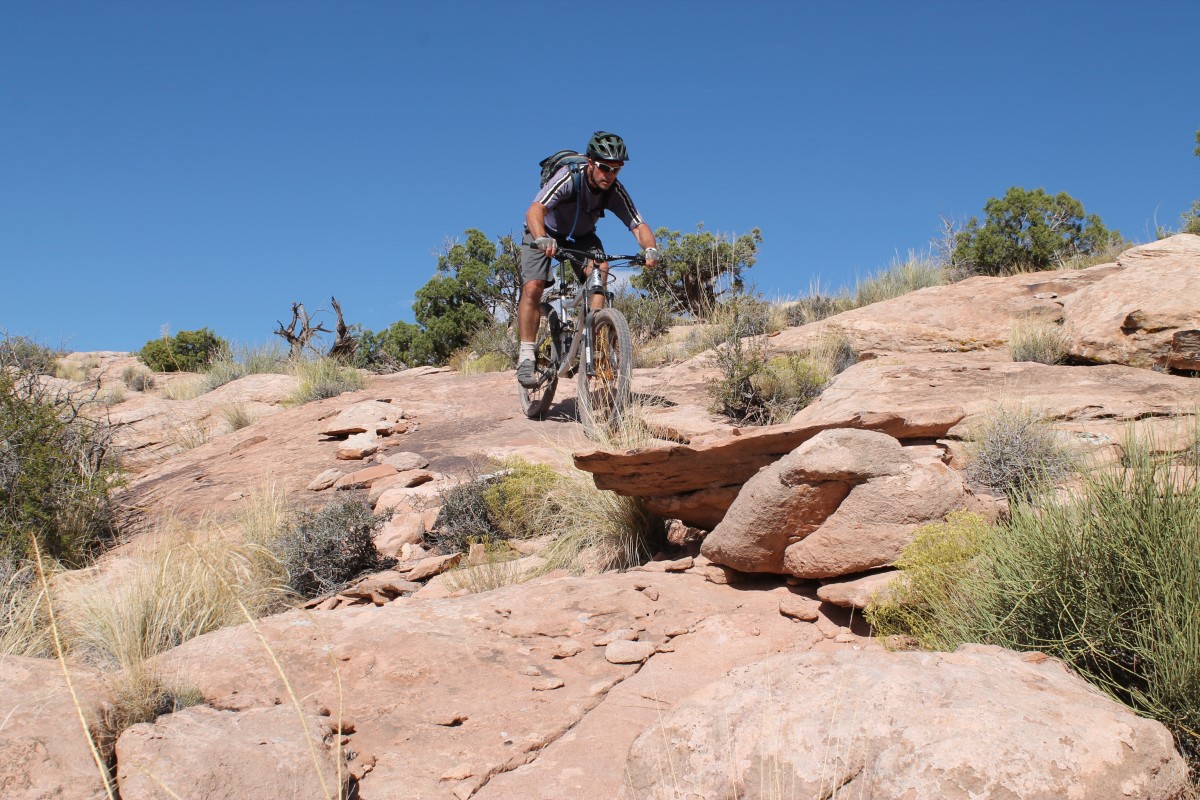 Knolly was a long time coming to the 27.5″ scene, not so much out of resistance to change, as it is a result of their being a small company with limited capacity to roll out new products. They wisely want to make sure they’ve got it right before they do.  I can attest that they did indeed get it right with the Warden, as it is a special bike that hits its intended target squarely in the bullseye, while showing other capabilities as well.

Next, they will even be rolling out a carbon Warden.  The I9 folks had a pre-production carbon Warden on display and it was most drool-worthy.

My demo bike was a custom build and had no standard price attached, but the current Warden frame retails for $2,495 and an X01-equipped bike will run in the high sixes.  No word yet on the cost of the coming carbon model.